As Bitcoin and numerous altcoins surge toward new all-time highs, traders who are coin rich but cash poor are increasingly flocking to decentralized finance lending platforms where they can collatoralize their holdings to raise funds for new investments.

Compound is one of the leading DeFi lending platforms and over the past month its TVL and governance token price has rallied to new highs.

Compound, which ranks third among DeFi lending protocols, has $4.55 billion worth of assets locked on the platform and its COMP governance token has doubled in value over the past week. Currently COMP trades for $566, a new all-time high and 325% increase since the start of 2021 .

While there are no major announcements that seem to have catalyzed the current rally from COMP, the project did recently integrate with Ledger’s Lend platform which allows wallet users to interact with the Compound platform and lend out their stablecoins.

According to Leshner, all markets are affected by long trade settlement times due to the structure of Depository Trust & Clearing Corporation (DTCC), and he suggested that “markets run on blockchains” as “the long-term answer” to the problems currently faced.

“Instant settlement would eliminate most of the complexity, cost, and capital requirements which plague T+2 settlement. Robinhood wouldn’t have credit obligations, or the need to turn against their own customers.”

AT the time COMP was trading for $241 and it’s possible that the extra attention the GameStop fiasco brought to the crypto and DeFi sector may have motivated some investors to give Compound and other decentralized exchange platforms a try. 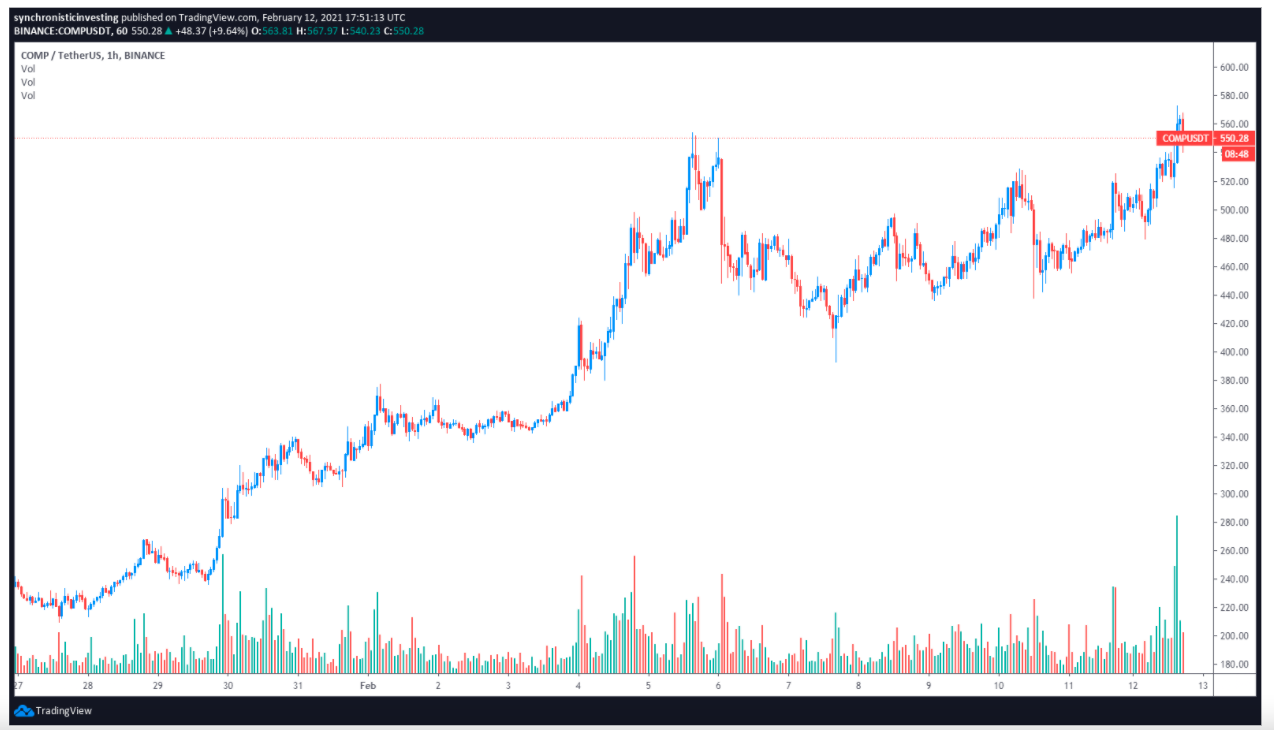 On Feb. 1 COMP proposal 36 reached the required threshold needed to allow a three-day community voting period, which finished on Feb 12.

The proposal, which sought to allow the “Community Autonomous Proposal (CAP) to increase the Collateral Factor (CF) of WrappedBTC from 60% to 75%” on the platform,” passed by a wide margin and will be implemented after a two-day waiting period.

Another wave of buying followed this announcement, propelling the price of COMP 54% higher from $382 in the early trading hours on Feb. 4 to $555 on Feb.5.

As attention from institutional investors grows and big-name influencers like Elon Musk and Mark Cuban tout the benefits of decentralized finance and the yield it offers, the current uptrend in TVL is poised to move higher as token values and protocol engagement surge to new highs.