Over the years, there has been a growing trend of fintech infrastructure players around the world. In Africa, a handful of startups have launched in the past three years to provide such services. Stitch, a South African fintech startup, is one of them and today, it is coming out of stealth and announcing its seed round of $4 million. This makes it the largest round raised by any API fintech startup in Africa at the moment.

Founded by Kiaan Pillay, Natalie Cuthbert, and Priyen Pillay, Stitch wants to provide full API access to financial accounts across Africa starting from its first market, South Africa. With its API, developers can connect apps to financial accounts. This allows users to share their transaction history and balances, confirm their identities, and initiate payments.

We’ve seen a wave of API-led financial services companies proliferating around the globe. Plaid leads the way in the U.S. Sweden-based fintech Tink has also been dominant across Europe, while Truelayer and Belvo are holding the fort in the UK and Latin America.

These companies provide engineering and developer tools that reduce the technical and operational effort needed for apps to connect to their users’ financial accounts. By way of APIs, they make it possible for other companies to integrate what are otherwise complex services to build from the ground up simply by adding in a few lines of code.

Like other financial infrastructure companies, Stitch services allows companies and developers to innovate around other services like personal finance, lending, insurance, payments and wealth management.

The founders draw on prior experience building API products for local markets in the past. In 2017, Kiaan Pillay worked as the head of operations for South African insurance API platform Root. He left a year to Smile Identity, a San Fransisco-based identity API company. There, he worked with fintechs across Africa and discovered they faced infrastructural issues around compliance and identity.

At this time, Pillay, Cuthbert — who was the CTO at Root — and Priyen were playing around building a Venmo style wallet for Africa as a side project. Eight months trying to connect to banks showed them how the lack of infrastructure in African fintech slows down progress.

“We were looking for a way to let users cash out from their wallet to their bank account,” Pillay tells TechCrunch. “We did this manually at first and then as a stopgap, we automated the process using screen scraping. We realized that the automated solution to this manual problem could be a product by itself and that there were more elegant ways to do it.”

This set the team up to work on Stitch — Pillay as CEO, Cuthbert as CTO and Priyen as CPO. They began working on the idea full-time in October 2019 and secured a pre-seed round a month later. While in stealth, Stitch says it has gotten a handful of clients, which include Intelligent Debt Management, Momentum Velocity Club, Paystack, and FlexClub. The company is also beginning to attract some attention from corporate companies around consumer-facing products.

As of now, Stitch has a data and identity API product, and this month, a payment product will be added to its offerings. Like most API fintech startups, Stitch charges developers and companies per API call. However, for some products like budgeting or personal finance management apps, it also charges a fixed fee.

With wide and deep investor backing, Stitch will use the funding to consolidate growth in South Africa. There are plans to also launch operations in West and East Africa; the company’s statement reads.

These markets already have players, mainly Nigerian startups, in the API fintech space. They have raised sizeable rounds with enviable backings as well. Mono, a startup that only launched six months ago, is backed by YC; For Okra, it is Pan-African VC firm TLcom Capital; OnePipe has Techstars, and US-based but Africa-focused Pngme has attracted investment from Pan African VC firms EchoVC and Lateral Capital.

For now, these startups don’t operate in more than two countries. For instance, Mono, Okra and OnePipe are only live in Nigeria. Pngme says it’s operating in Nigeria and Kenya, while Stitch is only in South Africa. It will be interesting to see how competition and collaboration play out when they expand outside their markets. We might not wait long as Okra is currently in beta in Kenya and South Africa, and Mono is planning an expansion into Ghana and Kenya before the end of the year.

For the founders of these startups, competition can be healthy for the market and Pillay adds that what might play out, in the long run, is each company creating a niche functionality at which they’re best.

“Africa is a large market needs so it needs more than one or two players and I think what we would start to see happen is that some companies will be known to do a particular functionality well like payments, data enrichment, or merchant identification.” 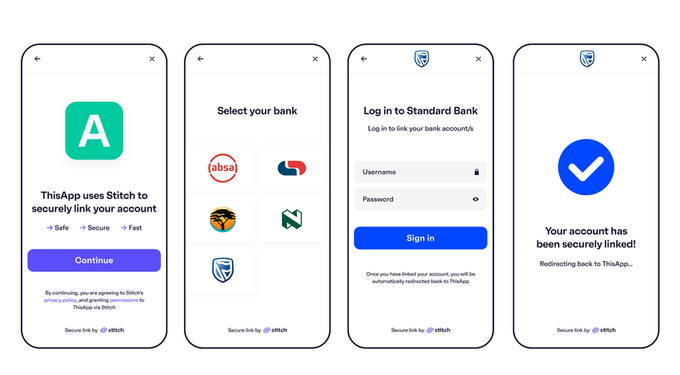 Stitch has an impressive lineup of investors for this seed round led by London-based VC firm, firstminute Capital and SA-based investment firm, The Raba Partnership. Other investors who took part include both funds and angels.

On how the startup still in stealth managed to get these investors on board, Pillay says it’s down to the company’s network in the US and the belief each investor has in the product.

“Spending a lot of time in San Francisco when working with Smile has helped us to get in touch with these globally world-class founders and investors. There’s an opportunity for us to provide a new generation of financial services in markets across Africa, and we’re really fortunate to have them back us.”

For Brent Hoberman, co-founder and executive chairman of firstminute capital, the firm decided to back Stitch because it believes most online business in Africa will embed fintech capabilities in their applications — facilitating online payments, increasing lending capacity and streamlining KYC and identity checks — through Stitch.

“As a fellow South African, I’m excited to be partnering with a team of exceptionally talented local engineers with pan-African ambitions,” he added.

That said, Africa’s fintech sector is beginning to heat up after a slow January which saw agritech and cleantech sectors dominate funding rounds. This week, South African digital bank TymeBank raised a whopping $109 million to expand across the country and into Asia, extending the sort of large rounds we’ve seen in the past from a sector that attracted more than 30% of VC funding.

For Stitch, its seed round is the latest in a series of notable deals in the African API fintech space over the last two years, where all major players have raised between $500,000 to $4 million.