On March 1 cryptocurrency investors woke up to the sight of Bitcoin (BTC) rising from it weekend correction to $44,000 as the market found its bullish momentum and altcoins rebounded from their swing lows.

Data from Cointelegraph Markets and TradingView shows that the price of Bitcoin increased 16.6% from its low of $43,504 on Feb. 28 to the $50,000 level which bulls are attempting to flip back to support.

Earlier in the day, MicroStrategy CEO Michael Saylor tweeted that the firm had purchased another $15 million worth of Bitcoin, bringing its total holdings to 90,859 BTC and further demonstrating that institutional demand for the top cryptocurrency continues to grow as firms buy each dip’

Analysis of key BTC price indicators also shows that bulls were eager to buy the $43,000 retest which occurred over the weekend.

Not every analyst is bullish

Bitcoin’s surge above $49,000 has some calling for new all-time highs in the near future, but according to veteran analyst Peter Brandt, nothing is certain when it comes to the cryptocurrency market.

Today Goldman Sachs announced that it would restart its crypto trading desk and Brandt was quick to tweet the following chart and point out that its launch didn’t work out so well for the cryptocurrency market in December 2017. 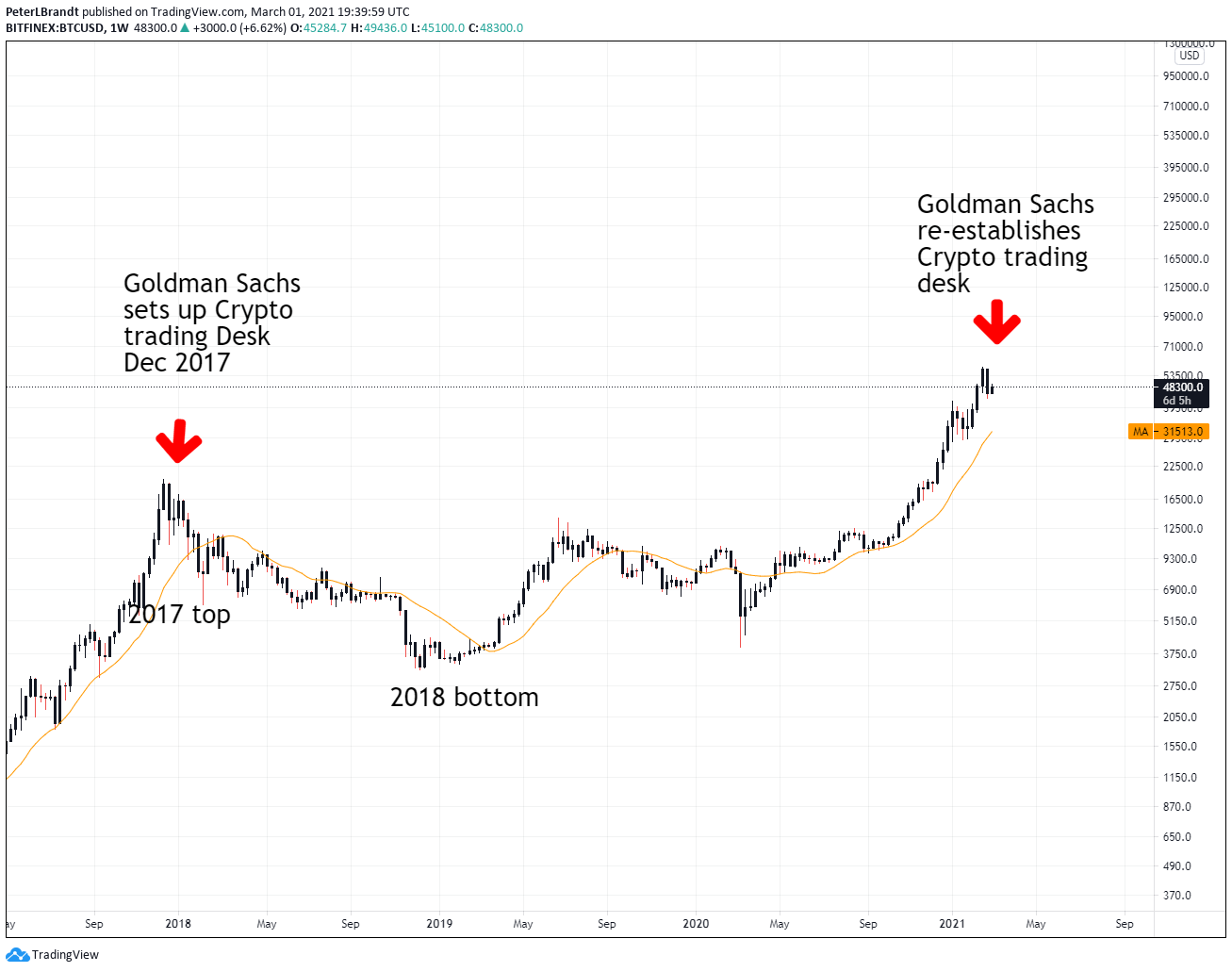 According to David Lifchitz, Chief Investment Officer of ExoAlpha, it’s still “too early to tell” if the pullback in Bitcoin is over but $44,500 appears to have provided strong support.

In terms of whether the top cryptocurrency could breakout to new highs in March, Lifchitz said he’s uncertain on exactly what might happen as March is historically a bearish trading month for BTC.

According to Lifchitz, tax season in the U.S. could put bearish pressures on the market as investors may need to “sell some of their holdings to pay for earlier realized capital gains.”

From a bullish perspective, the 20% correction during the second half of February may have signaled an “early start” to the usual March weakness, with the worst of the downturn already transpiring.

“Despite the 20% pullback, we’re still in an upward sloping trend since the October $10K breakout. The big unknown is what the miners will do as they are net sellers. They are the real short-term risk.”

Analysis of Glassnode’s Net Unrealized Profit and Loss (NUPL) metric shows that while both 20% corrections experienced during this cycle have created the “signature sideways and choppy” price action typically seen during bull markets, buyers have been stepping in sooner than they had in previous bull cycles and fewer long-term holders are willing to sell their BTC. 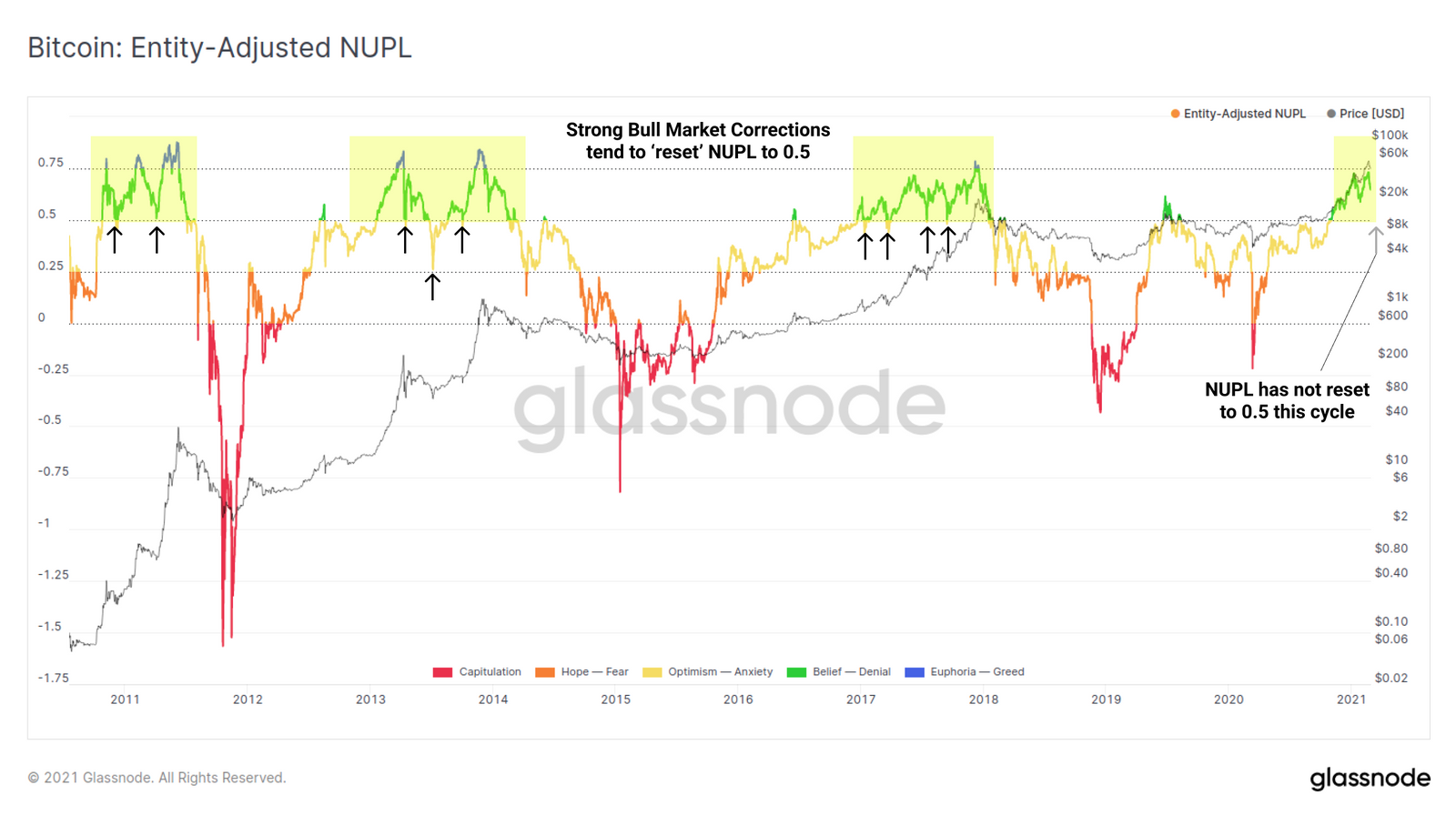 The traditional financial markets also rallied on Monday as Treasury yields stabilized and optimism related to the COVID-19 vaccine rollout boosted investor sentiment about the future of the global economy.

The S&P 500, Dow and NASDAQ all closed the day in the black, finishing up 2.38%, 1.95% and 3.01% respectively. The strong performance from each index occurred as global central banks world continue to reaffirm commitments to accommodative policies that will support the global economic recovery.

Altcoins also recovered their recent losses as Bitcoin price broke out to $50,000.