59 with 52 posters participating, including story author

Comcast just released a 2020 Network Performance Data report with stats on how much Internet usage rose during the pandemic, and it said that upload use is growing faster than download use. “Peak downstream traffic in 2020 increased approximately 38 percent over 2019 levels and peak upstream traffic increased approximately 56 percent over 2019 levels,” Comcast said.

But while upload use on Comcast’s network quickly grows—driven largely by videoconferencing among people working and learning at home—the nation’s largest home-Internet provider with over 30 million customers advertises its speed tiers as if uploading doesn’t exist. Comcast’s 56 percent increase in upstream traffic made me wonder if the company will increase upload speeds any time soon, so I checked out the Xfinity website today to see the current upload speeds. Getting that information was even more difficult than I expected.

The Xfinity website advertises cable-Internet plans with download speeds starting at 25Mbps without mentioning that upstream speeds are just a fraction of the downstream ones. I went through Comcast’s online ordering system today and found no mention of upload speeds anywhere. Even clicking “pricing & other info” and “view plan details” links to read the fine print on various Internet plans didn’t reveal upload speeds.

Even after adding a plan to the cart and going through most of the checkout process, I could not find any mention of upload speeds. I got to the point where you have to enter credit card information to continue, so I initially stopped there. I later confirmed that Comcast’s ordering system will show upload speeds after it checks whether your credit card is valid, in the final page where you submit an order.

Deliberately keeping customers in the dark

I’ve long known that it’s difficult to find upload speeds on Comcast’s website, but I’m not sure exactly when it became virtually impossible. There were complaints about this very problem on Comcast’s customer support forums in 2020 and in 2019, though. “What is my upload speed now? No where in the world can I find documentation,” one customer asked. The answer was that existing customers can find upload speeds for their own plan in their account settings after logging in and navigating to the correct section.

But that does not help people who are signing up for service and want to find out what upload speeds they’ll get or compare upload speeds of different plans. Even the Xfinity.com comparison tool that lets you compare details of different plans doesn’t reveal their upload speeds. The absence of upload speeds from Comcast’s website is so thorough that it is clearly a deliberate attempt to keep customers in the dark. This gallery shows how the Comcast Xfinity website displays Internet plans without mentioning upload speeds and continues that tactic through nearly the entire checkout process: 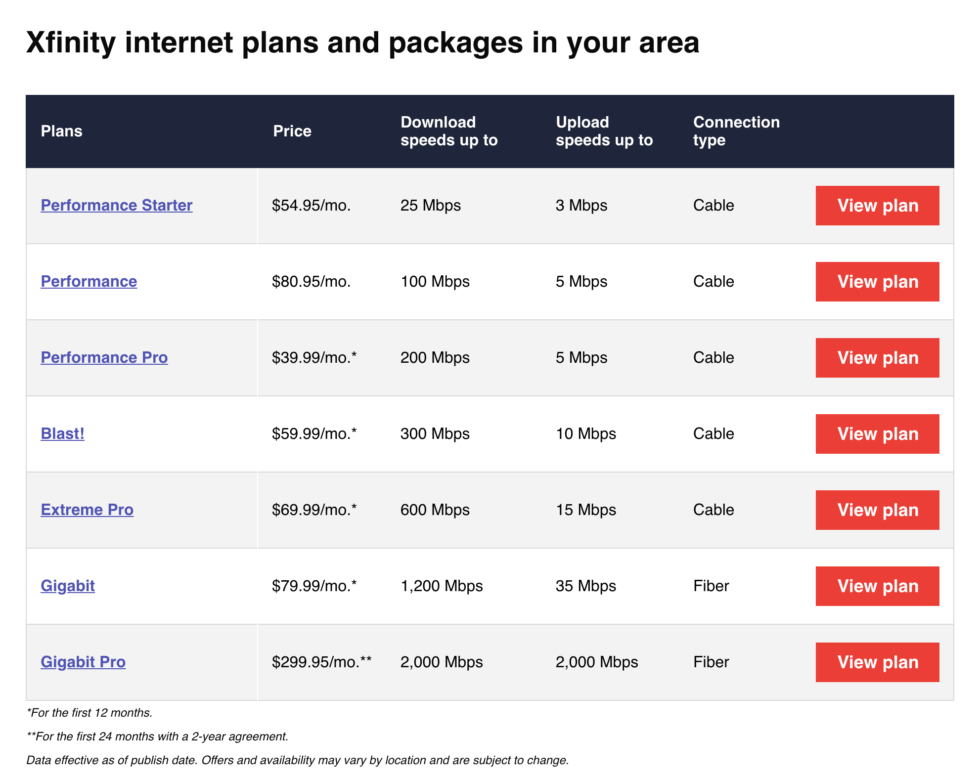 Enlarge / Comcast speeds and prices, no thanks to Comcast’s website.

Comcast’s website does list the 35Mbps upload speeds for the gigabit plan at this page, but I couldn’t find anything similar for Comcast’s other cable-Internet plans. Comcast also offers a fiber-to-the-home service with 2Gbps speeds both downstream and upstream. But Comcast’s residential fiber requires installation charges of up to $500, and the service costs $300 a month, which is more than three times as much as the gigabit-cable plan that has 35Mbps downloads. 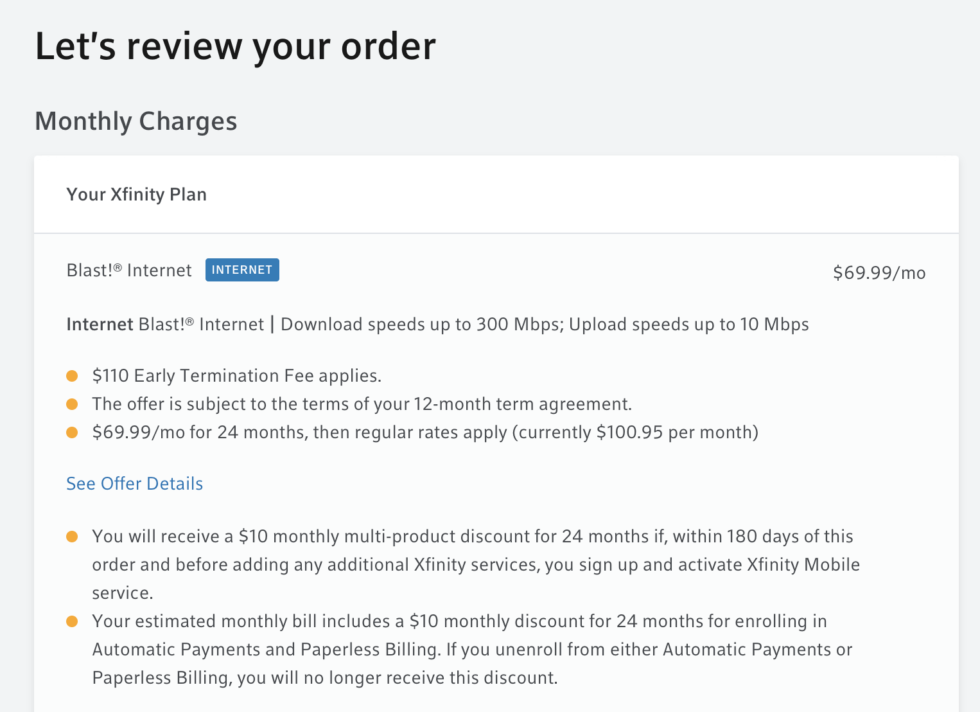 At this page, with Comcast having already verified your card, you can view upload speeds and decide whether to submit the order or exit the ordering system. The part of Comcast’s statement that upload speeds are “visible upon check out when you submit your order” is thus accurate. But refusing to tell a prospective customer what they’re paying for until after they submit credit card information is simply ridiculous. You can probably get upload speeds earlier by asking a Comcast rep in an online chat or phone call, but that shouldn’t be necessary.

Update: After digging through Comcast’s list of customer agreements, policies, and disclosures, I found a now-outdated network management page that includes download and upload speeds. It appears to be the newest such list available on Comcast’s website, but it was published on August 19, 2019 and the listed speeds don’t match Comcast’s current offerings.