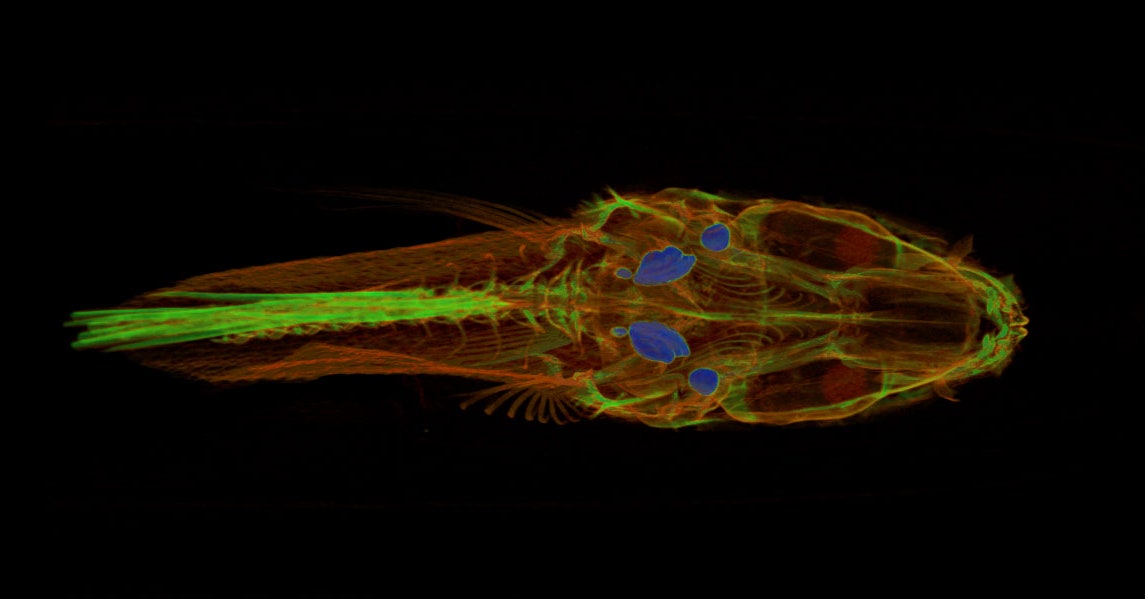 As expected, the otoliths in fish exposed to higher carbon dioxide levels were slightly larger—Radford wasn’t surprised. “More important,” he adds, “the symmetry between the left and right side were different.”

Symmetry is vital for two-sided animals such as fish and humans. “If you look at someone’s face, most people are symmetrical, the left side matches the right side. It’s the same with all human sensory systems,” Radford says. Fish brains depend on symmetrical anatomy to compute their perception of hearing from the raw sound. If you ditch that symmetry, the mental math changes—and the fish’s hearing becomes less sensitive. “If you’ve got otoliths that are a different shape,” Radford says, “then one is going to sense something different to the other, which is going to make any form of sound localization more difficult.” If you’ve ever lost your balance because you have water clogging one ear, you’ve experienced something similar.

Radford’s team actually measured how ocean acidification could weaken hearing. Radford placed tiny sensors on each fish immobilized in the modeling clay, right near their brainstems. Then once the fish were back in the tank, the researchers played tones and measured “auditory evoked potentials”—the electrical signals the brain receives.

“We found that the low-frequency part of the hearing dropped down,” Radford says. At frequencies between 80 and 200 hertz, hearing sensitivity collapsed roughly 10 decibels. Most vocal fish communicate at frequencies between 100 and 300 Hz, a deep hum to a mild ooo. And decibels run on a logarithmic scale: A 10 decibel decrease means a tenfold decrease. “It’s bad news, particularly for fish, if they can’t hear at these low frequencies,” Radford says.

Bignami is taking the model-defying results of the new study in stride. A bigger otolith should make hearing more sensitive, as his model found, but the surprising contribution from asymmetry between left and right otoliths ends up being way more important. “Measuring actual neurological signals in juvenile fish is really difficult to do,” he says of the new study. “It’s quite convincing. They’re observing a pretty clear change here.”

The full consequence on fish behavior will result from a combination of overgrown otoliths, asymmetric anatomy, and neurochemical effects. Ocean acidification makes some fish brains less receptive to a neurotransmitter controlling impulsive behavior. (In one study, larvae raised in acidified waters swam toward the smell of predators.)

“It shouldn’t be overlooked that this is looking at the relationship at a really critical life stage,” says Sara Shen, a marine scientist who now works for an environmental consulting firm that was not involved with the study. Shen’s previous research showed the connection between otolith size and a type of balance called vestibulo-ocular reflex in a sensitive transition point for fish larvae. Radford’s chosen period, where young fish are settling on reefs, is very important for maintaining their populations. “This is really great work,” she says.

So what does this experiment tell us about how climate change is affecting reef fish? The tenfold drop in hearing was observed among fish exposed to a 120 percent increase in dissolved carbon dioxide from 450 to 1,000 micro-atmospheres of pressure in water. Since CO2 is a dissolved gas, this value represents the pressure it would have in an otherwise empty container, where 1 million micro-atmospheres equals normal air pressure. Such a big average concentration increase won’t happen in surface waters in the next few years, although it fits longer-term trends if CO2 emissions continue unabated.

But even a smaller drop in hearing acuity, caused by milder acidification, would still be significant. Deafened juvenile fish could struggle to find reefs when migrating after hatching in the open ocean. If they can’t settle, they can’t survive and spawn. And those fish play an important role in maintaining reefs. Predatory reef fish, for example, eat herbivores, which in turn keep algal growth in check. Overgrown algae smothers coral. The coral dies and erodes. Fish shelters and egg-laying surfaces vanish along with it. “That ecosystem disappears,” says Yvonne Sadovy, a marine biologist at the University of Hong Kong who was not involved with the study.