Does Atlantic Canada have a blueprint for rural revival in the post-pandemic era? 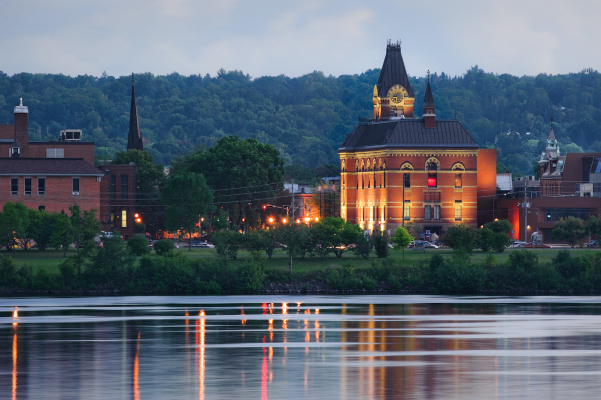 Matthew Carpenter-Arévalo is a former Google and Twitter manager and current CEO of Céntrico Digital, a Latin American-based digital agency.
More posts by this contributor

When Mike Morrison left his hometown of Fredericton, New Brunswick, for Calgary, Alberta, he assumed he’d never go back except to visit.

Morrison was following a well-trodden path of Atlantic Canadians heading west to find work rom which few returned. During the mid-aughts, Alberta was booming thanks to the high price of oil. To Morrison, migrating west seemed an easy choice. “If I stayed, my options were to be a supply teacher or work in a call center.”

When he arrived in Alberta, Morrison worked three jobs. During his free time, he started a blog to tell his friends back home about his life out west, and also to recommend TV shows. Slowly, Mike’s Bloggity Blog became one of Canada’s premier entertainment sites, and Morrison found himself with a local newspaper column as well as regular television and radio appearances. He then started Social West, a Calgary-based digital marketing conference that, before long, expanded to three cities. His identity and public persona were intertwined with his adopted city.

“For a while, I would tell people that I was being paid to be a professional Calgarian.” Then, in 2021, Morrison left Calgary for Halifax, Nova Scotia, back east.

Morrison and his partner are part of a wave of skilled young people reversing Canada’s natural current of internal migration. In doing so, they’re participating in an economic revival that could change the destiny of the depressed Atlantic region.

When they return, young people like Morrison are finding that Atlantic Canadians have quietly built a robust startup ecosystem that has resulted in a dozen acquisitions to companies like IBM and Salesforce, the sum of which likely surpasses $5 billion in cash and stock.

The Atlantic Canada story may provide a blueprint for other rural regions looking to take advantage of the decentralizing impact of COVID-19 to swap resource-based economies for the knowledge economy.

If you’ve never thought of Atlantic Canada before, you’re not alone. Indeed, many Canadians refer to Toronto as “east”’ despite there being 1,900 miles between Drake and The Weeknd’s hometown and St. John’s, Newfoundland and Labrador, the easternmost point of Canada and North America. The four provinces that make up Atlantic Canada (New Brunswick, Nova Scotia, Prince Edward Island, Newfoundland and Labrador) are easy to overlook for their remoteness. Known within Canada for its sleepy seaside towns, kitchen parties, trouble-making red-headed orphans and lobster galore, Atlantic Canada has had a rough few decades.

After the collapse of the cod fishing industry in the 1990s followed by the migration of shipbuilding to Asia, Atlantic Canada defined itself as the have-not region of America’s rational northern neighbor. Despite booming from the war years onward due to its abundant natural resources, since the ’90s Atlantic Canada has watched its young people migrate west to the oil fields of Alberta for blue-collar work and to Toronto and Montreal for white-collar work.

Soon, the region’s hard-luck narrative stuck. Stephen Harper, the country’s prime minister from 2006 to 2015, famously quipped that the region suffered from “a culture of defeatism.” The narrative of the death of the coastal region became a self-fulfilling prophecy.

Outsiders were surprised by the sudden upsurge in exits, but momentum had been building for some time. Business writer Gordon Pitts pinpoints 2011 as the game-changing year for the Atlantic startup scene. In his book “Unicorn in the Woods: How East Coast Geeks and Dreamers are Changing the Game,” Pitts recounts how in March 2011 Salesforce purchased New Brunswick-based social media monitoring company Radian6 for approximately $300 million. Then, in November of the same year, IBM purchased another New Brunswick-based startup, cybersecurity company Q1 labs, for a reported $600 million. If anyone considered the Radian6 acquisition a one-off chance event, the subsequent success of Q1 labs demonstrated there was a there there.

Under normal circumstances, one might expect the founders of Radian6 and Q1 labs to disappear into the suburbs of Cambridge or Marin Country, but that never happened. Rather than uproot their newly acquired companies, both Salesforce and IBM opened engineering offices in Fredericton. Verafin would appear to be following suit: in the press release announcing the acquisition, Nasdaq committed to keeping the company’s headquarters in Newfoundland, investing in the local university and contributing to the development of the local ecosystem.

Once lone rangers, Q1 Labs and Radian6 are now surrounded by thriving copycats in a self-sustaining ecosystem. According to Peter Moreira, founder of Entrevestor, a publication that has tracked the Atlantic Canadian startup scene since 2011, the ecosystem has attracted over a billion dollars in investment spread among 700 companies, creating more than 6,000 direct jobs. About 100 companies are created every year in fields as diverse as life sciences, cleantech and ocean tech.

VC firms have taken notice: notable investors in Atlantic Canadian startups include Breakthrough Energy Ventures, a fund supported by Bill Gates, Jeff Bezos and Richard Branson. Indeed, what’s remarkable about the string of recent exits is their diversity across industries and their inside-baseball inclinations, spanning everything from fraudulent credit card transactions to fitness data and video technology.

Sandy Bird is one of the protagonists of the Atlantic Canada tech-driven economic revival. Sandy co-founded Q1 Labs and then, after the acquisition, became the CTO of IBM’s security division. In 2017, Bird and the former CEO of Q1 Labs founded a new cybersecurity company, this one focused on public clouds, called Sonrai Security, which has since raised nearly $40 million in venture capital. Bird takes great pride in having lived his entire life within a 30-minute radius and showing the world that his prior exit was not a one-off event.

According to Bird, IBM was happy to keep an engineering division in New Brunswick because the quality of the engineers is high and employee attrition, one of the obstacles for any fast-growing company operating in the competitive labor market of the San Francisco Bay Area, is low. Atlantic Canada is a place where the idea of the “company man/woman” is still alive and thriving.

Bird noted that “thanks to our high retention, we’re able to build a company culture that makes up for any of the disadvantages of a smaller labor market.” Bird also pointed out that the Atlantic time zones are ideal, enabling effective communications with Europe as well as the rest of North America.

Bird is also honest about the region’s shortcomings. For example, airline connections to Atlantic Canada can be tricky. Getting to places like Denver can take a day and multiple connections. Sonrai Security, for example, has its core engineering team in Fredericton while sales and marketing are in New York, with regional salespeople spread out around North America.

In terms of starting a company, the local ecosystem can provide those first checks to get a company up and running, but growth from Series B onward requires tapping into U.S. venture capital. Another challenge is hiring fast enough to meet the demands of a thriving tech company. Though companies like his can recruit recent graduates and exiled Atlantic Canadians eager to return, Bird mentioned that Q1 Labs opened a parallel engineering office in Belfast, Ireland, to scale-up hiring.

So what is the playbook for other rural regions hoping to copy the Atlantic Canada model of generating tech jobs? Speaking to insiders, all cite the low cost of living and high quality of life as enabling startups to both attract and retain talent. Second, a welcoming attitude toward immigration helps. Even prior to COVID-19, Canada cheekily took advantage of anxiety around U.S. immigration policies to launch a startup visa program to attract entrepreneurs and H1-B visa holders away from the United States, and many cite that program as acting as a strategic advantage for the coastal provinces.

Atlantic Canada’s recent success is owed in part to proactive government. After years of failed top-down economic development initiatives, both the provincial and the federal governments have found formulas to kickstart new companies through grants as well as repayable and non-repayable non-dilutive funding.

Entrepreneurs cite IRAP, the National Research Council of Canada’s Industrial Research Assistance Program, as key to obtaining funds that subsidize wages for staff and contractors. Another federal government agency, the Atlantic Canada Opportunities Agency (ACOA), awards funding between CA$500,000 and CA$3 million (roughly $400,000 USD to $2.4 million USD) through its Atlantic Innovation Fund (AIF). Each of the four provincial governments has its own incentive programs, which include grants and wage subsidies as well as incentives for private investors.

Despite these government programs, local entrepreneurs stress that the region’s modest success is primarily driven by the private sector. Each province tends to have a godfather/cheerleader who has championed local startups through investment, advice and connections. Notable also is the accessibility of the success stories of the region’s protagonists. In a place where ostentatious displays of wealth are avoided, successful founders are easy to get a hold of and happy to provide advice, contacts and in some cases capital. Also notable is the region’s mix of 16 public-private universities that produce graduates with varied skill sets across STEM and humanities programs.

Even with these advances, obstacles abound, and it remains to be seen whether politicians and policy-makers can match entrepreneurs with bold initiatives. While countries like Ireland and Estonia have rewritten their corporate tax codes to encourage tech companies to set up in their previously disadvantaged jurisdictions, Atlantic Canada continues to have tax rates above neighboring provinces and U.S. states. Past innovation hubs have relied on physical proximity in order to build networks of human and social capital. Atlantic Canada as a region spans 500,000 square kilometers (193,256 square miles), much of which is hard to get to and poorly connected to the rest of the world.

Having done the hard work of providing the region with a new narrative, and a newfound sense of self-belief, many entrepreneurs hope to finally transition away from a declining resource-based economic model. They want to create a world where ambitious Atlantic Canadians don’t need to choose between staying close to home and pursuing exciting careers.

There are reasons to be hopeful: With every exit, future entrepreneurs are provided the success stories that, like supernovas, explode and act as the base material for new ventures. With every VC investment, the region’s network of startups builds the social capital that can enable the next round of funding. With every innovation, the region’s breadth of knowledge deepens through newfound expertise.

And with Atlantic Canada’s traditional migratory patterns seeming to reverse themselves as workers return to seek a lower cost of living and higher quality of life in small towns with coastal views, the pool of talent has only increased.

In the post-COVID world, talent can go anywhere, proving that constant proximity is not a prerequisite to building high-performing companies. To replicate the Atlantic Canada model, however, rural areas will need to offer more than a lower cost of living, as housing prices quickly catch up to demand.

Atlantic Canada’s modest success can be summarized as the result of fomenting a highly collaborative ecosystem that includes companies, universities, investors and government to ensure that the human capital, social capital and financial capital are available to propel new companies forward. Only by building an ecosystem can we create economic models where instead of talent chasing opportunity, opportunity chases talent.