The superheated NFTs? A crypto market niche tipped to boom or bust

In a whirlwind seven-day period, which began with Twitter founder Jack Dorsey proving that almost anything can be tokenized — even his old tweets — and culminated on Thursday with a Christie’s art auction that brought a mind-boggling $69.3 million bid for a tokenized Beeple work — fetching more at an auction than pieces by George Seurat, Paul Gaugain or Salvador Dalí — some observers were asking: Are nonfungible tokens spiraling out of control?

Even before the storied auction house catapulted artist Mike Winkelmann, aka Beeple, into the rarified company of Jeff Coons and David Hockney — i.e., living artists able to command stratospheric prices for their works — some were questioning the market’s sanity. Marketing guru and author Seth Godin, for instance, wrote in a blog post, “NFTs are a dangerous trap,” and the current mania is “an unregulated, non-transparent hustle with ‘bubble’ written all over it.”

Meanwhile, on March 8, an NFT version of a deliberately-burned Banksy painting sold for almost $400,000 on marketplace OpenSea, prompting Zavier Ellis, director of a London gallery, to tell the United Kingdom’s The Telegraph: “I wonder if this is some form of pyramid selling where ultimately somebody will be burnt.” David Knowles, who runs an art advisory firm, Artelier, commented that purchasing contemporary works of art is risky generally, but buying nonfungible tokens appears to be the “extreme end” of this.

It bears asking after such a week: Is the NFT market bubbling over, and if so, are people going to be hurt?

Heading for a fall?

“NFTs are an exciting innovation,” Fabian Schär, professor in the business and economics department at the University of Basel, told Cointelegraph, “but that does not mean that every doodle suddenly is valuable just because it is represented by an ERC-721 or ERC-1155 token,” adding:

“There are some interesting projects out there, and they are likely here to stay, but the vast majority of NFTs will be completely worthless once the hype is over.”

“I wouldn’t say things are out of control, but NFTs seem to have become today’s hot trend, and so many opportunists are jumping on the bandwagon in the hope of making a quick buck,” Gary Bracey, co-founder and CEO at Terra Virtua, told Cointelegraph. “I do fear the oversaturation of mediocre products and newcomers not bringing anything innovative or different to the party.”

What might be driving this speculation? Misha Libman, co-founder of art marketplace Snark.art, told Cointelegraph: “The soaring prices are tied to governments pumping trillions of dollars into the global economy to counteract the damage caused by the pandemic, and this excess liquidity is showing itself across the board.”

Do bubbles typically cause some damage when they burst, though? Answered Bracey: “I’d like to think people are smarter than that and won’t fall for any of the ‘Emperor’s New Clothes’ shenanigans.” The entire NFT community would be negatively impacted if things were to burst, suggested Libman, adding:

“But I think that it is important to note that the current attention and investment pouring into the sector is also helping build the much-needed infrastructure and tools that will make it easier and cheaper to build projects that utilize the blockchain technology.”

Blake Finucane, co-author of a position paper on NFT-based art titled “Crypto art: A decentralized view,” told Cointelegraph: “A bubble is especially hard to avoid with NFTs because one of the notable upsides of NFTs is the ability to buy, sell and trade them instantly, from wherever you are in the world.” Therefore, according to her: “Flipping is inevitable in a hot market where buying and selling are as easy as a push of a button.” Those who are in it for the short term — “only to flip whatever they are buying” — are at the highest risk, she added.

Are buyers “blind” to NFTs’ limits?

Godin further wrote in his post: “Buyers of NFTs may be blind to the fact that there’s no limit on the supply.” One example he gave was that “in the case of art, there’s a limited number of famous paintings and a limited amount of shelf space at Sotheby’s.”

Is this a valid criticism? While agreeing that the NFT market is currently overheated, Schär disagreed with this assessment, noting that while anyone can create an NFT, “it is not possible to create copies of a specific NFT.” As for the specific examples cited in the post:

“I would completely disagree with that statement, as it fails to comprehend the nature of the digital collectibles,” said Libman, referring to the Godin remark, adding: “In the art world, the practice of editioning has existed for a long time, particularly in photography and printmaking, and while an artist can certainly violate the trust of their collectors by selling more editions, the loss of reputation would devalue any future work.”

A profligate use of energy?

In his post, Godin also warned that “the rest of us are going to pay for NFTs for a very long time. They use an astonishing amount of electricity to create and trade.” Responding to this criticism, Giovanni Colavizza, assistant professor of digital humanities at the University of Amsterdam, told Cointelegraph that “technological innovation is already ahead on this issue,” adding further, “Ethereum will soon transition to a proof-of-stake protocol that is much more environmentally friendly.”

Farooq Anjum, associate professor at Harrisburg University of Science and Technology, told Cointelegraph that he wasn’t sure the profligate-energy-use scolding was valid. “Don’t we spend an astonishing amount of dollars to protect the Mona Lisa or other valuable non-digital assets?”

Bracey admitted that the ecological issue had bothered him significantly when he first started getting involved in blockchain, “but technology and efficiency has improved since then, and my understanding is that processes are on the way that will largely address the gas/power issue, particularly with level two and the forthcoming next-gen Ethereum.”

Meanwhile, some were questioning if NFTs were just so many castles in the air. “Is this a bubble?” asked Mati Greenspan, founder of Quantum Economics, in his daily newsletter. “It could be, but in my humble opinion, we’re just getting started.” He displayed the NFT for a pixelated ape that “just sold for 800 ETH (approximately $1.5 million), and here I’m using it as part of a newsletter without paying a dime, nor even breaking any rules.” 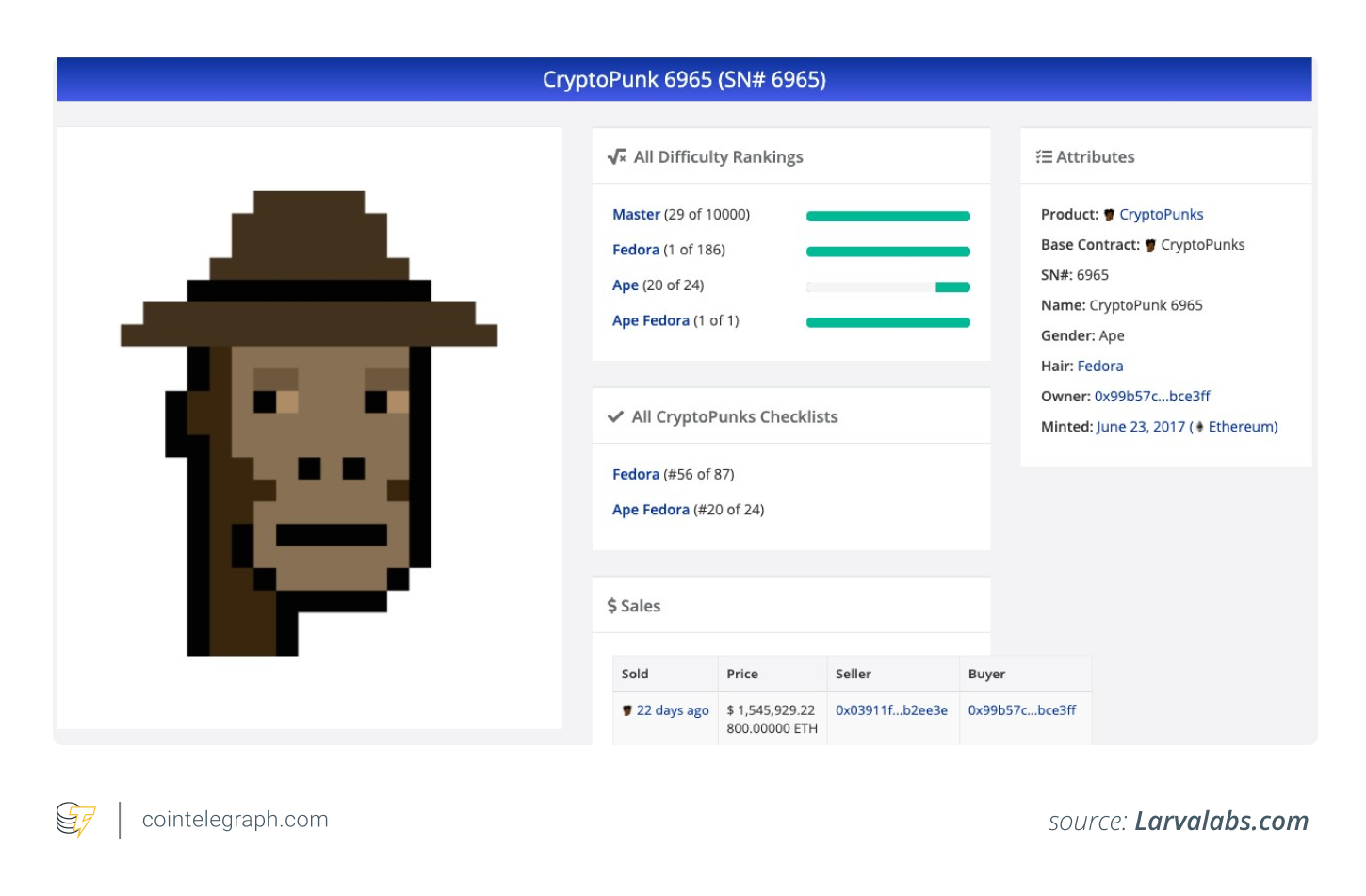 But this is not about copying art, Greenspan continued: “What these artists are doing is more akin to selling autographed prints of their work, only the autograph is digitally verifiable and limited in supply, ensuring the scarcity element that collectors desire.”

Colavizza told Cointelegraph that it is difficult to identify a bubble when one is actually inside a bubble, adding: “In the short term, the growth of NFTs and cryptos will need some adjustment after a rapid surge. Volatility will likely remain high.” In the longer term, though, the market should grow significantly:

“The innovations of crypto and NFTs are yet to fully materialize. We are still in the early days, like with the World Wide Web in the late 1990s. Was there a bubble then? Yes. Does it mean these innovations won’t in the long term be extremely successful and impactful? I think not.”

Is there a proper use for an NFT?

Is there a proper use for NFTs, then — beyond mere speculation? “Absolutely,” answered Schär. “For artists, it is a way to reach a broader audience and monetize their work,” while for collectors it offers “provable scarcity.”

Anjum added: “NFTs can possibly be used for addressing the problem of assigning ownership of digital media without a trusted third party,” though that problem is still unsolved, presumably because the market is insufficiently decentralized. “We are trying to run here even though we have not learned how to walk,” said Anjum.

Colavizza acknowledged that some “peculiar usages of NFTs” have been displayed recently — he mentioned the tokenized tweets — but added that “we are already seeing plenty of serious creatives and creators being able for the first time to directly reach their market and monetize their work.”

“There are a multitude of ‘proper uses’ for NFTs,” added Bracey, going on to say: “Being able to authenticate ownership, safeguard a limited-edition release of a special collectible, or anything that requires formal validation or certification will benefit from NFTs. We are only just scratching the surface.”

“Is it a bubble?” asked Libman. “Maybe.” But it could also be about something that can fundamentally change how digital content is created, sold and accessed, he said, adding: “This is not a trivial technological shift that will just blow over and revert back.”