Backed by YC, Vendease is building Amazon Prime for restaurants in Africa

For small and mid-sized restaurants in Nigeria and most of Africa, food procurement can be a complex process to manage. The system is such that a business can easily run out of money or have considerable savings. Most restaurants don’t have access to deal directly with farms to get better deals because they lack the staffing to chase them. Besides, they also don’t have the aggregation pull as single entities to directly get good value from the farms.

Nigerian startup Vendease solves this problem by building a marketplace that allows restaurants to buy directly from farms and food manufacturers.

The company was founded by Tunde Kara, Olumide Fayankin, Gatumi Aliyu, and Wale Oyepeju. The idea for Vendease came when founders who have been friends for more than five years noticed their favorite restaurants in cities like Lagos and Accra shutting down. Inquisitive, they asked the owners who were acquaintances why, and the problems boiled down to the unreliable and expensive nature of food procurement in the cities.

Some months later they saw a hotel manager openly complain to a vendor about the unsteady supply of produce the hotel was getting. It sparked an idea in the founders’ minds.

The established processes involved staff or a contract employee going to the market or using third-party vendors. The founders saw that these processes were often unreliable from the two unrelated events, and restaurants lost a lot of money from price inflation and bad produce.

“We thought to ourselves that if restaurant owners and hotel managers have these problems, let us actually do some research and find out if it is a problem we can solve the problem at scale and make money while doing it,” Kara said to TechCrunch.

At the time, Kara, the CEO, and Fayankin, the COO, held the respective positions at a Pan-African media consulting company called RED Media. Aliyu, the chief product officer (CPO), also held a similar role at another Lagos and San Francisco-based, YC-backed startup, 54gene. Oyepeju, the CTO, was working on a couple of technology projects for corporates.

Before Vendease, they had founded an adtech startup for ride-hailing companies, which didn’t survive for long. So this was another shot at another entrepreneurial journey, and after two and half months of iteration, the founders decided to launch the company in January 2020. They also closed an undisclosed pre-seed round to kickstart operations.

On its website, it is described as “a procurement platform that provides a transparent process for hotels and restaurants to get the best quality products at the best possible price.” But Kara has a more fanciful description: The Amazon Prime for restaurants in Africa.

Customers can order anything ranging from bread to grains and meat to vegetables on the website. The order notification goes to the farms or food manufacturers, gets processed, and delivery is done within 24 hours.

“Why we call ourselves that is because we are deliberate about fulfilling our orders to restaurants and hotels in less than 24 hours. As most of us know, this is similar to how Amazon Prime prioritizes delivery,” he commented.

The speed and timely manner in which Vendease carries out its operations are such that it currently completes 80% of on-time and one-time deliveries across all orders. 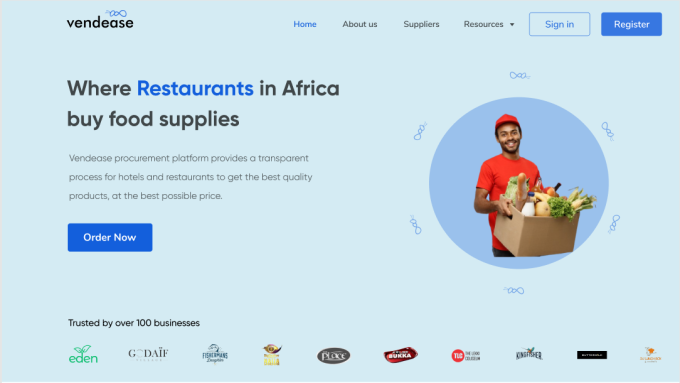 To further highlight how effective the company has been thus far, Kara claims that a good number of the 100 businesses using Vendease went from procuring only one type of produce to 80% of their catalog in two months.

As much as Vendease helps restaurants a lot, it also looks out for the vendors and farmers involved in the supply chain. Typically it takes two to three months for these set of customers to get the payments and this happens because restaurants and hotels take too long to balance their books before making payments. In effect, farmers and vendors mark up their prices to mitigate losses, making products more expensive for restaurants and hotels. But now, Vendease is helping these customers reduce the waiting time to days.

While growing up, Kara and Fayankin were on both sides of the vicious cycle. Growing up on a farm and helping his parents with livestock and crop care, Kara knows what it means to be owed for a long time.

“Those experiences help fuel what I do right now. Then, we had a problem selling our products and most times we ended up consuming them because we didn’t have enough off-takers. Even when you did, they’ll owe for six months. And this problem still exists to date.”

On the other side of the marketplace is Olumide, who grew up in a hotel and restaurant business. He runs and handles procurement activities and his experience is vital to how Vendease handles issues around unreliable and expensive supply of food produce.

Although they would’ve wanted to solve these problems earlier, their careers strayed toward media and energy. However, it has brought them back, and they’re solving additional problems they didn’t recognise in the past. They soon figured that customers couldn’t track most of their orders and be certain of what they got alongside the supply and cost issues.

Vendease has built all that to help these businesses digitize, track and automate their procurement and inventory management processes. It also helps with logistics, warehousing, quality control and financing where restaurants can buy goods and pay later.

In the next five years, the one-year-old company wants to be the “operating system for food supplies in Africa.” Kara talks of plans to expand to other African cities in the coming months but is tight-lipped on the names. As Demo Day approaches, the team will be looking to raise some money and follows Egypt’s Breadfast as the only restaurant-focused companies from Africa (although they have very different business models) that the accelerator has funded.