The Turkish lira lost 15% of its value and dipped close to its all-time low after Turkey’s President Erdogan fired central bank governor Naci Agbal. This resulted in a massive spike in Bitcoin (BTC) searches in Turkey as investors sought to protect their wealth from devaluation. This is just another example that shows how investors may be treating Bitcoin as a possible substitute for fiat currencies.

In other news, United States Federal Reserve chairman Jerome Powell has a different view. While speaking at an event hosted by the Bank for International Settlements, Powell said that Bitcoin is more of a speculative asset and could act as a substitute for gold but its volatility and decentralization make it difficult to use as money. 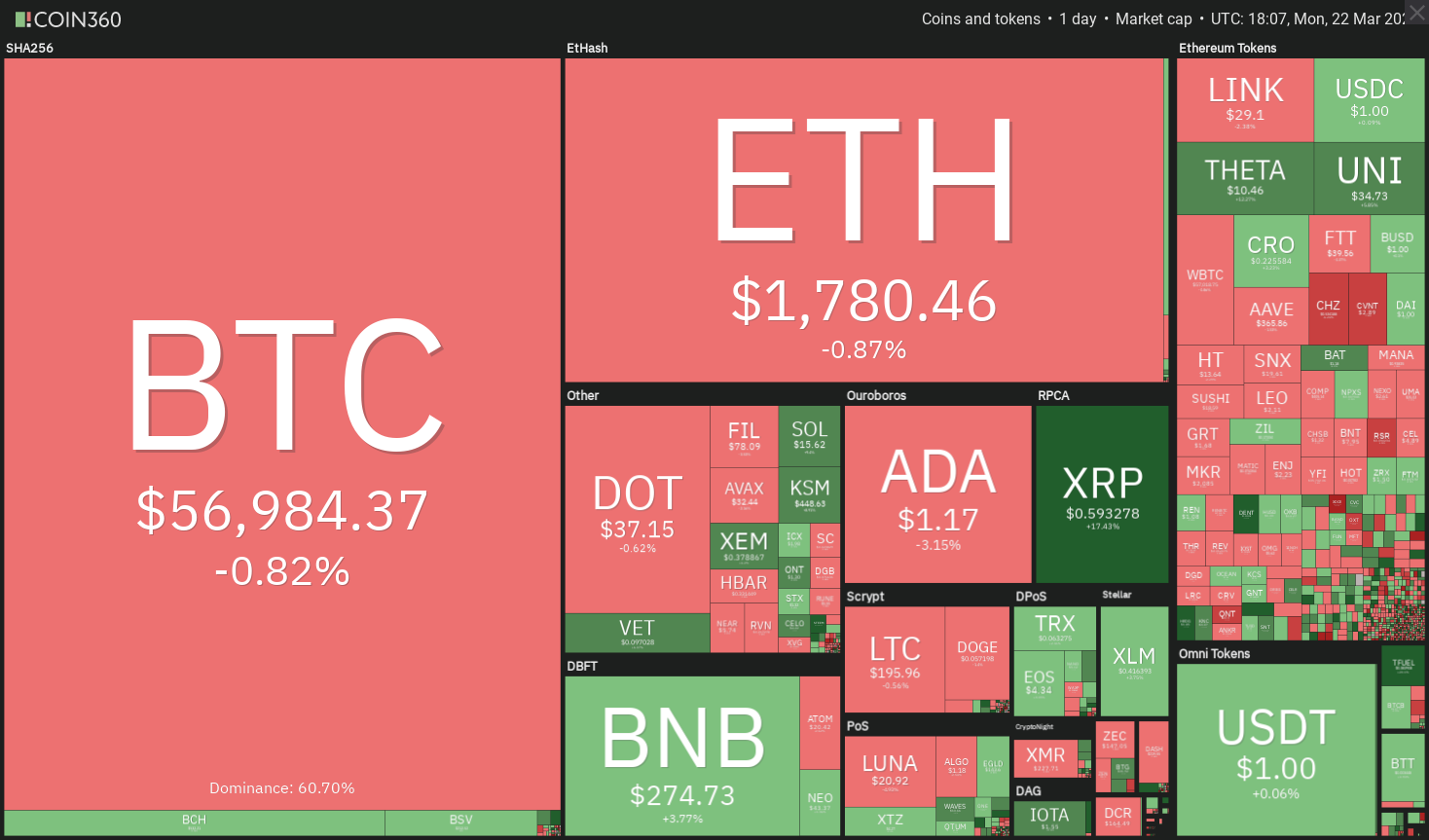 However, on-chain data paints a different picture. Glassnode data shows that only about 36% of Bitcoin’s supply has moved in the past six months, indicating that the current price has not tempted long-term Bitcoin investors to part with their holdings.

With supply shrinking and demand increasing due to the arrival of institutional investors, Bitcoin remains in a sweet spot. Demand for BTC could receive an additional boost if any of the recently submitted Bitcoin exchange-traded fund applications are approved by the United States Securities and Exchange Commission.

The fundamental sentiment remains positive for the crypto sector but do the technicals also project a bullish picture? Let’s study the charts of the top-10 cryptocurrencies to find out.

Bitcoin has formed a pennant pattern which is usually a setup for continuation. The bulls continue to buy the dip to the 20-day exponential moving average ($55,470) as seen from the long tail on the March 21 candlestick but the buyers are struggling to sustain at the higher levels. 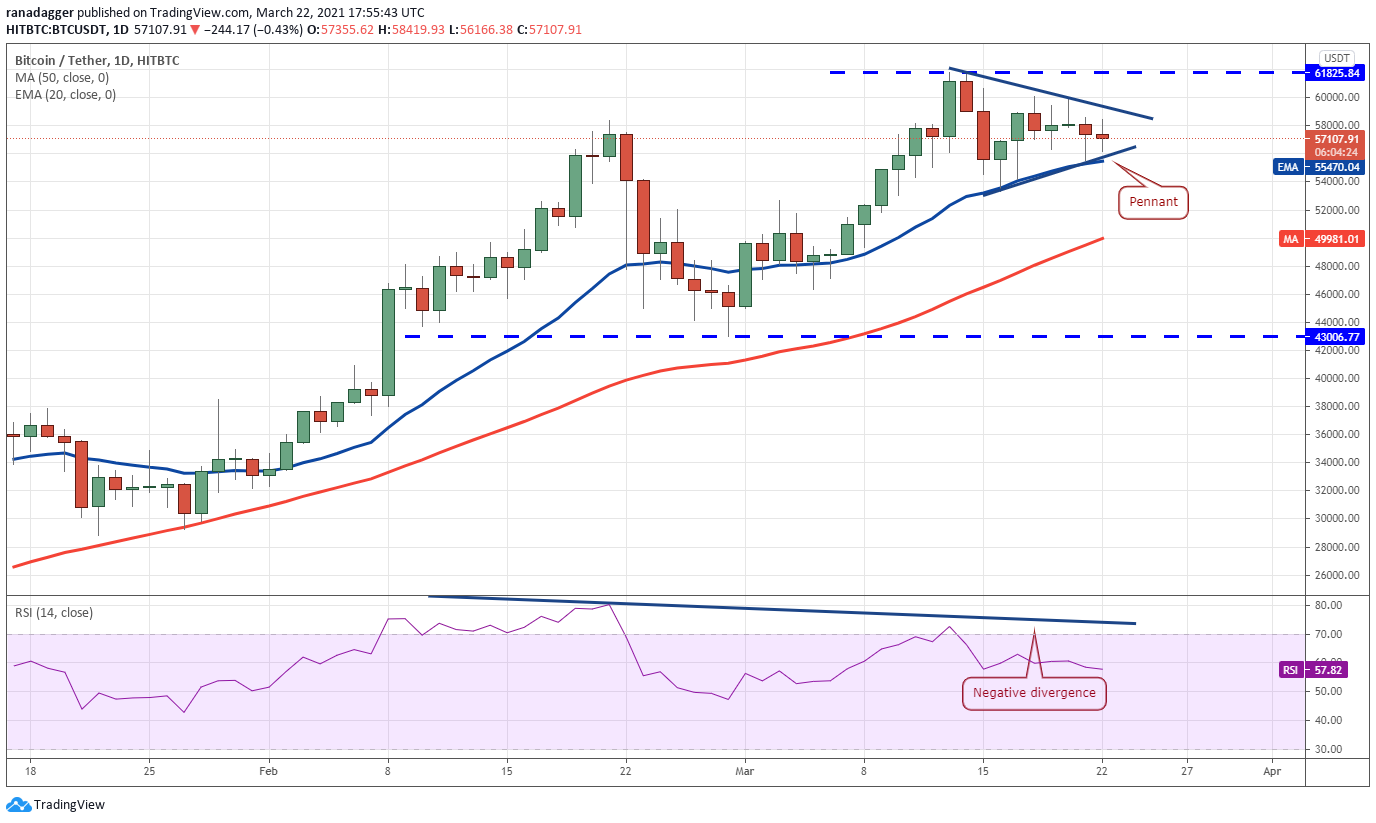 If the price turns up from the current level and rises above the pennant, it could signal the resumption of the uptrend. The all-time high at $61,825.84 may offer resistance but if the bulls can overcome it the BTC/USD pair could rally to $72,112 and then to $74,512..

The moving averages are sloping up marginally and the relative strength index (RSI) is in the positive territory, indicating that bulls hold a slight edge.

Conversely, if the bears sink the price below the pennant, it will invalidate the bullish setup, which could result in a quick drop to the 50-day simple moving average ($49,981) as the short-term traders hurry to close their positions.

Ether (ETH) has been holding above the 20-day EMA ($1,764) for the past few days, but the failure of the bulls to achieve a strong rebound off this level suggests that demand dries up at higher levels. 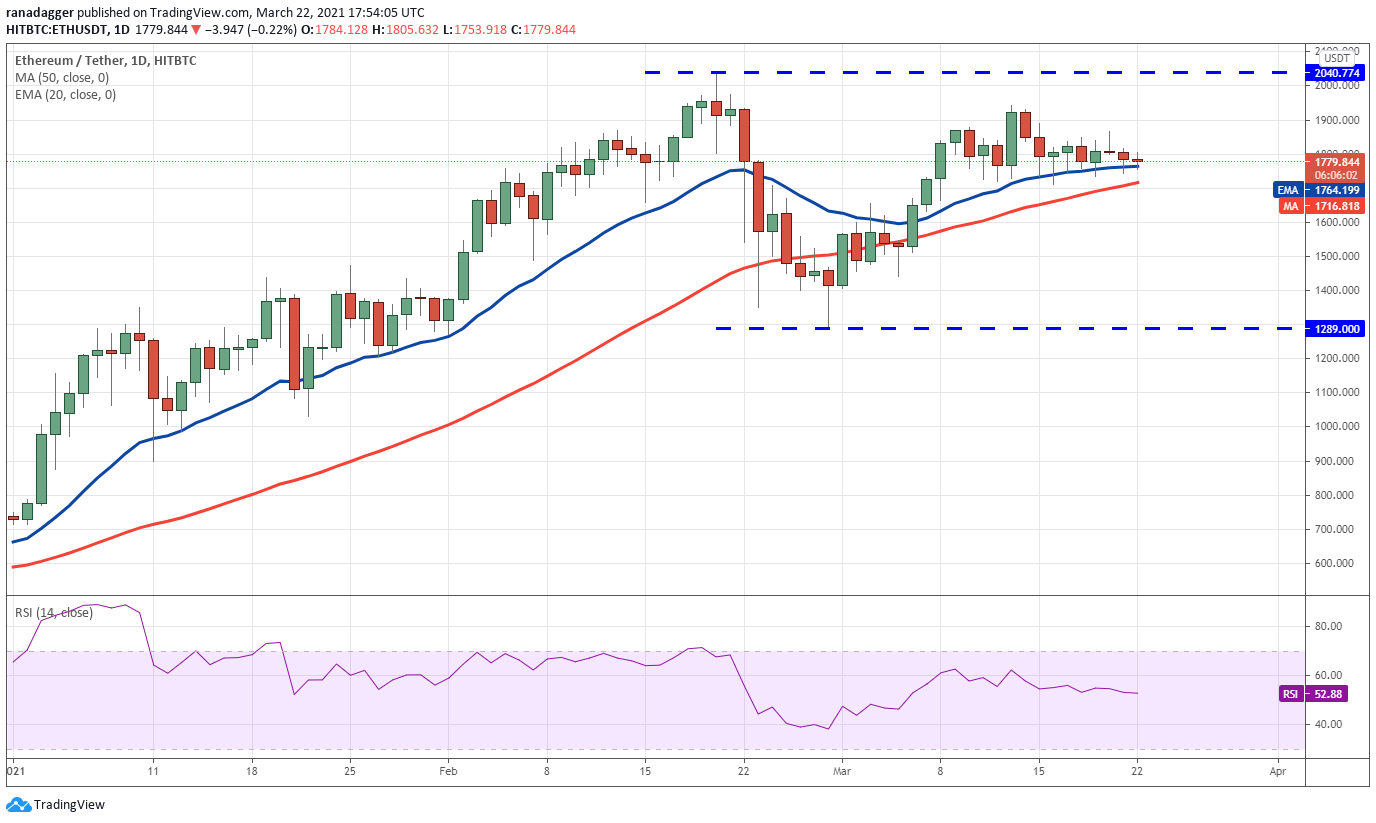 On the contrary, if the price turns up from the current level and breaks above the $1,942 to $2,040 overhead resistance zone, the pair may start the next leg of the uptrend that could reach $2,614.

Binance Coin (BNB) formed a Doji candlestick pattern for the past three days, indicating indecision among the bulls and the bears. But the only positive sign was that the price did not dip below the 20-day EMA ($255). 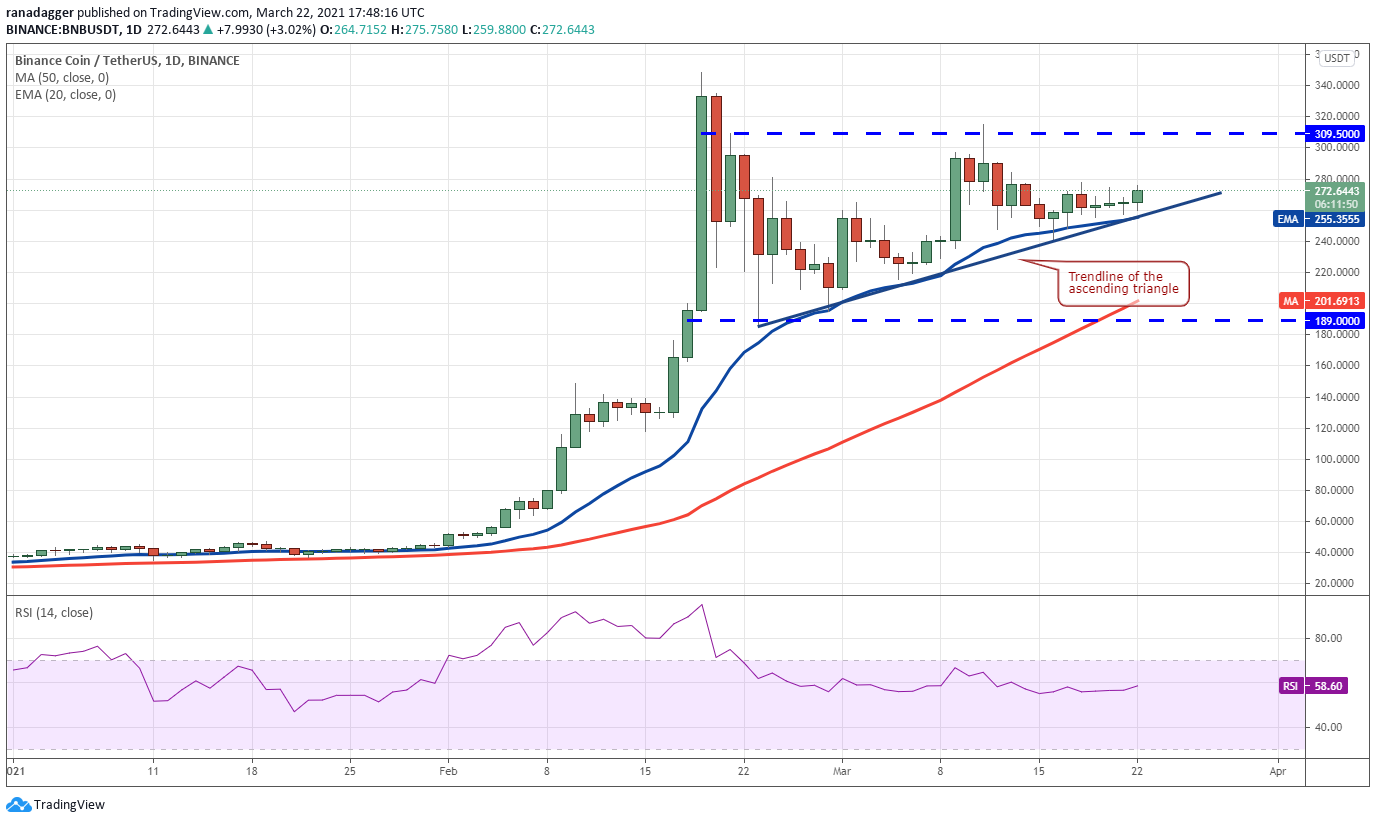 The bulls are currently trying to expand the volatility by pushing the price above the $280 overhead resistance. If they manage to do that, the BNB/USD pair could rally to $309. A breakout and close above this resistance will complete an ascending triangle pattern that has a target objective at $429.

The gradually upsloping moving averages and the RSI above 56 suggest a minor advantage to the bulls. However, if the price turns down from the overhead resistance and slides below the trendline of the triangle, it will invalidate the bullish setup. That could pull the price down to $189.

Cardano (ADA) broke and closed below the $1.23 support on March 20, which suggests a lack of demand. The bulls are attempting to defend the 20-day EMA ($1.16) but the lack of a strong rebound off it increases the likelihood of a break below it. 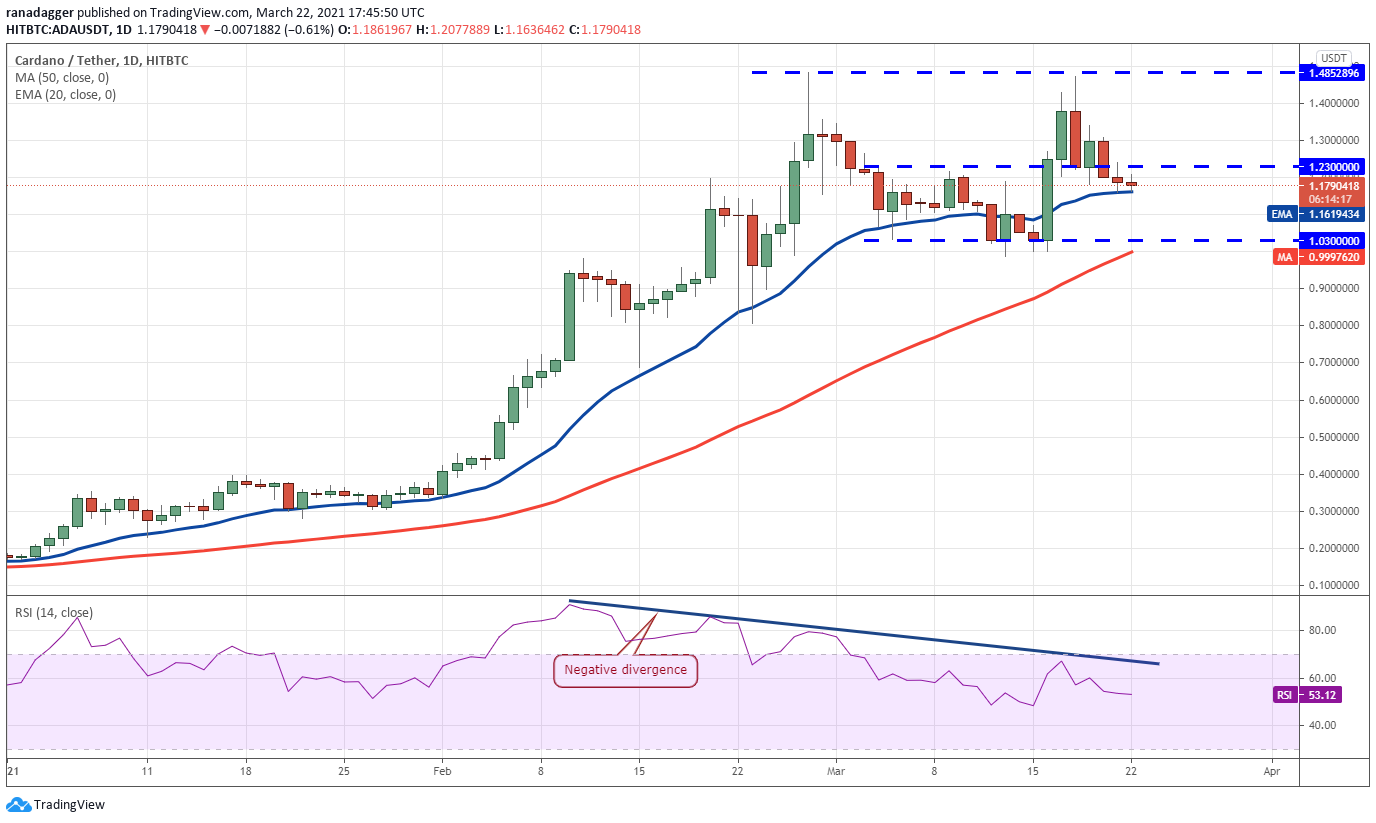 If that happens, the ADA/USD pair could drop to $1.03, which is a critical support to watch out for because the 50-day SMA ($0.99) is also just below it. If the price rebounds off this level, the pair could extend its range-bound action for a few more days.

The flat 20-day EMA and the RSI just above the midpoint suggest a balance between supply and demand. The next trending move could start on a break above $1.48 or a break below $1.03.

Polkadot (DOT) broke above the resistance line of the symmetrical triangle on March 20 but the long wick on the candlestick suggests the bears are selling on rallies. However, the bulls held the 20-day EMA ($35.74) on March 21 and will now again attempt to push the price above the triangle. 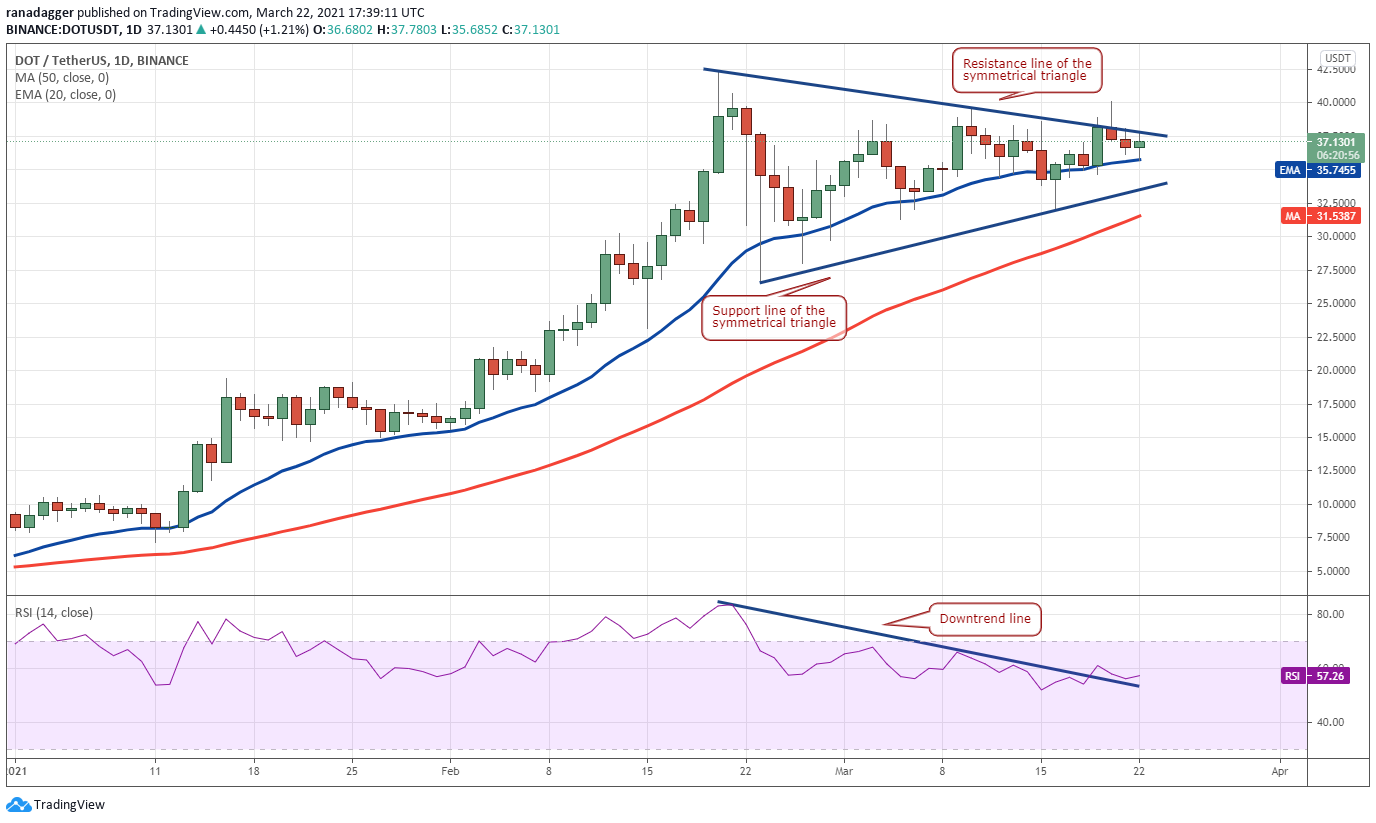 If they manage to do that, the DOT/USD pair could retest the all-time high and if that level is conquered, the uptrend could reach the pattern target at $55. The RSI has risen above the downtrend line and the moving averages are gradually sloping up, which shows the momentum is turning in favor of the bulls.

Contrary to this assumption, if the price turns down from the current level or the $40 to $42.28 overhead resistance zone, the bears will try to sink the pair below the support line of the triangle. If they succeed, the pair could start a deeper correction.

XRP has shown signs of life after a long time. The altcoin soared above the $0.50 resistance on March 20, which shows the bulls have overpowered the bears. The bears tried to sink the price back below $0.50 on March 21 but failed. 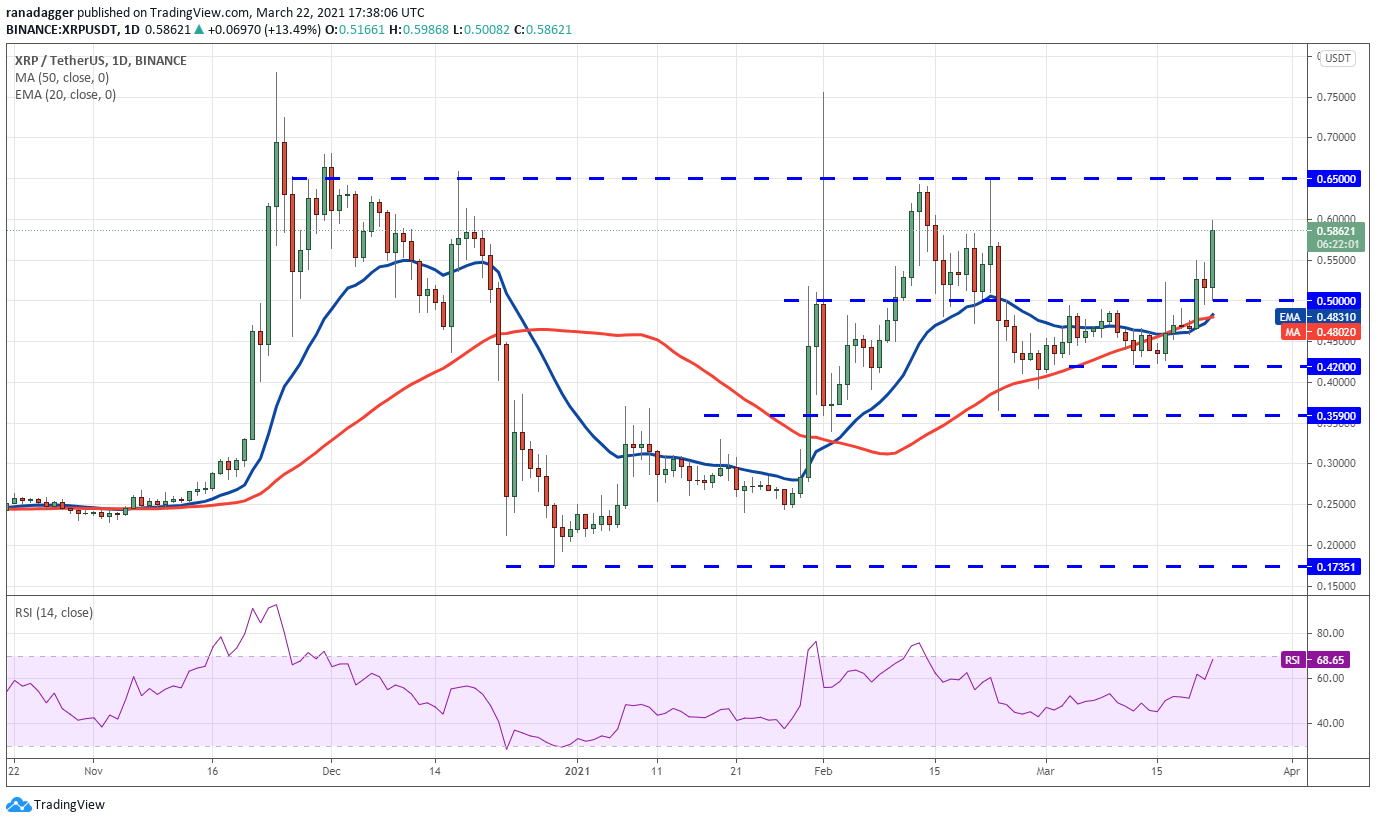 This has attracted further buying today, which has pushed the XRP/USD pair towards the overhead resistance at $0.65. If the bulls can drive the price above this level, the pair is likely to pick up momentum and rally to $0.78 and then to $1.

The moving averages have turned up and the RSI has risen close to the overbought territory, indicating the bulls are in command. This bullish view will invalidate if the price turns down and breaks below the moving averages.

Uniswap (UNI) is currently consolidating in an uptrend. The bulls attempted to thrust the price above the overhead resistance at $35.20 on March 20 but did not succeed. However, a positive is that the buyers did not allow the price to even dip to the 20-day EMA ($30.48). 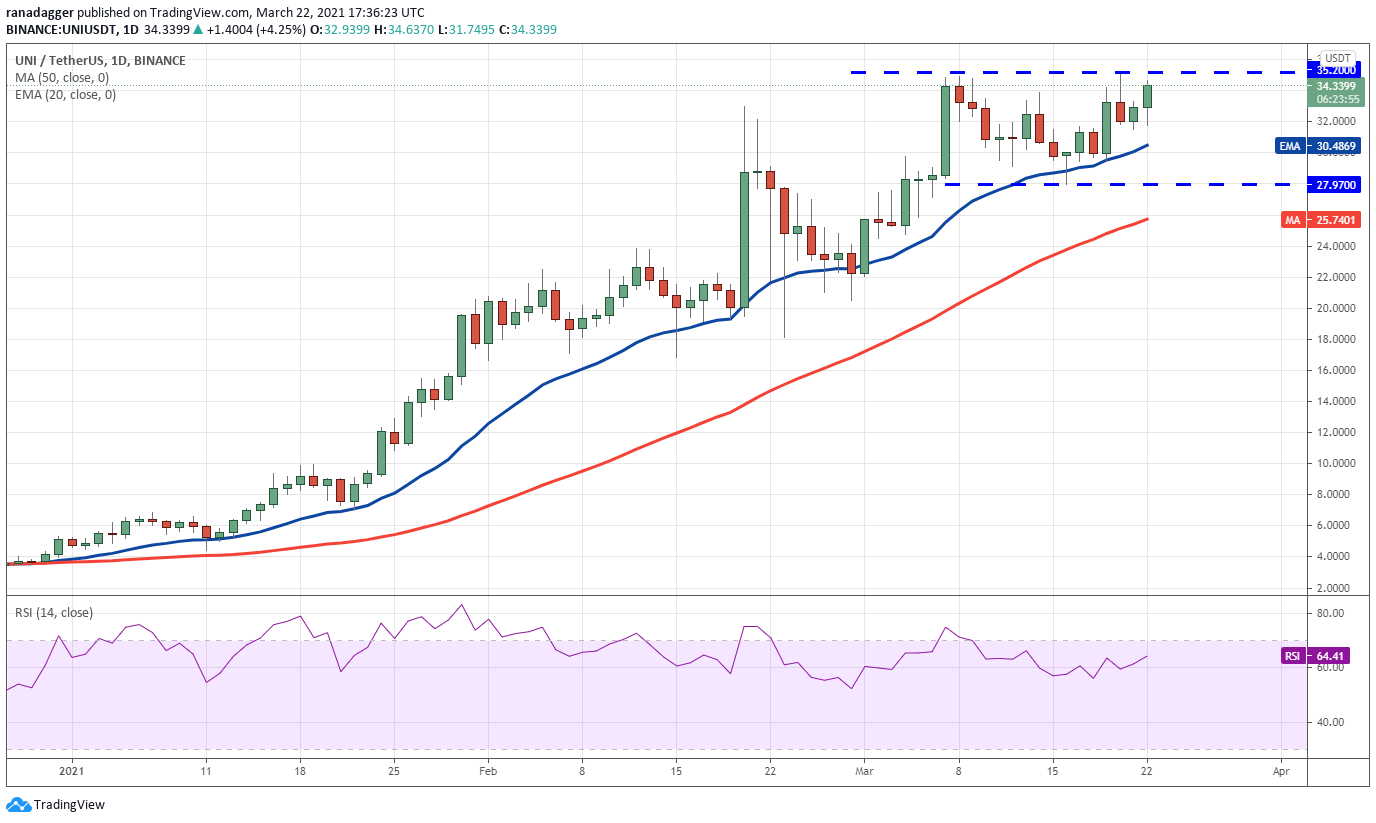 This suggests the bulls are buying on every minor dip. They are likely to make one more attempt to ascend the $35.20 resistance. If they manage to do that, the UNI/USD pair could start the next leg of the uptrend that may reach $42.43 and then $46.

The upsloping moving averages and the RSI above 64 also indicate an advantage to the bulls. This positive view will invalidate if the price again turns down from $35.20 and breaks below the 20-day EMA. Such a move could keep the pair range-bound for a few more days. 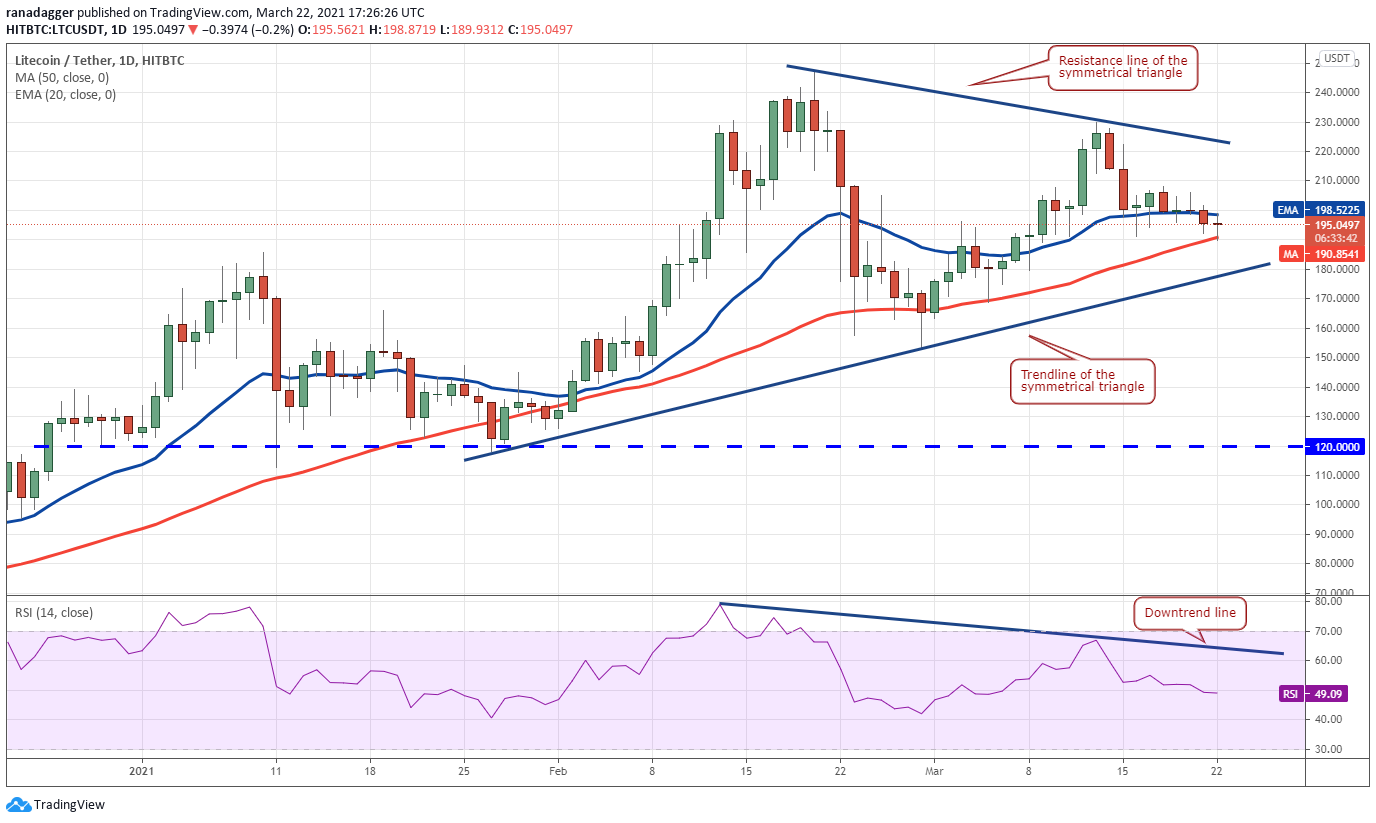 If they succeed, the price could drop to the trendline of the triangle. This is an important support to keep an eye on because if it breaks, the LTC/USD pair could drop to $152.94 and then $120.

On the other hand, if the price rises from the current levels, the bulls will try to push it to the resistance line of the triangle. A breakout and close above the triangle could result in a retest of $246.96 and then $300.

Chainlink (LINK) continues to trade inside the ascending triangle but the bulls are struggling to push the price above the $32 overhead resistance. The long wick on the March 20 candlestick shows the bears are defending this resistance aggressively. 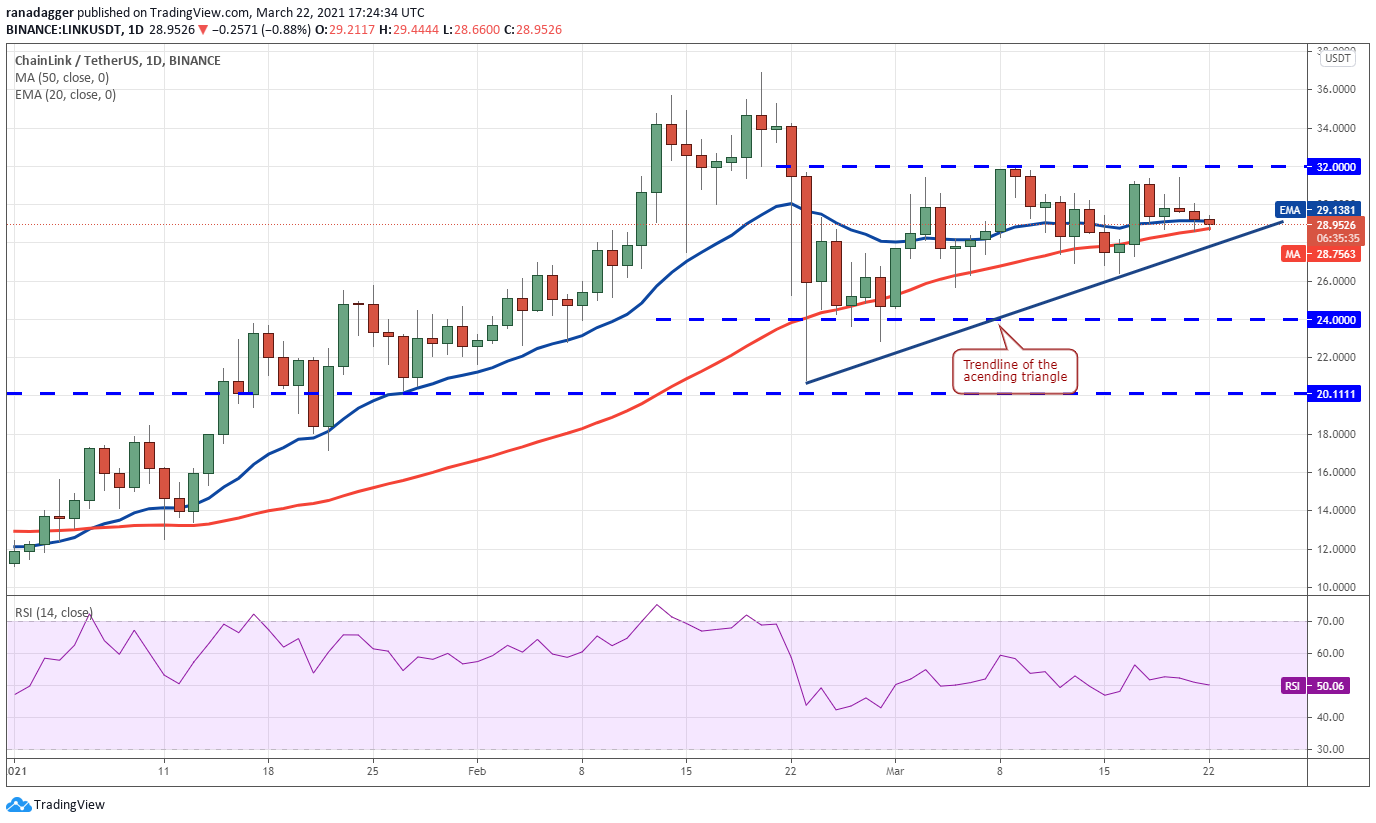 However, a minor positive is that the bulls are not allowing the price to break below the moving averages. This suggests the bulls are accumulating at lower levels. This period of indecision is unlikely to continue for long.

If the price turns up and breaks above $32, the ascending triangle will complete and that has a pattern target at $43.20. Contrary to this assumption, if the bears sink the price below the trendline of the triangle, the bullish setup will invalidate. That could pull the price down to $24 and then to $20.1111.

The strong up-move of the past few days has propelled THETA into the top-10 ranking cryptocurrencies by market capitalization after Bitcoin Cash (BCH) was nudged from its spot. Both moving averages are sloping up and the RSI has risen above 86 indicating the bulls are in command. 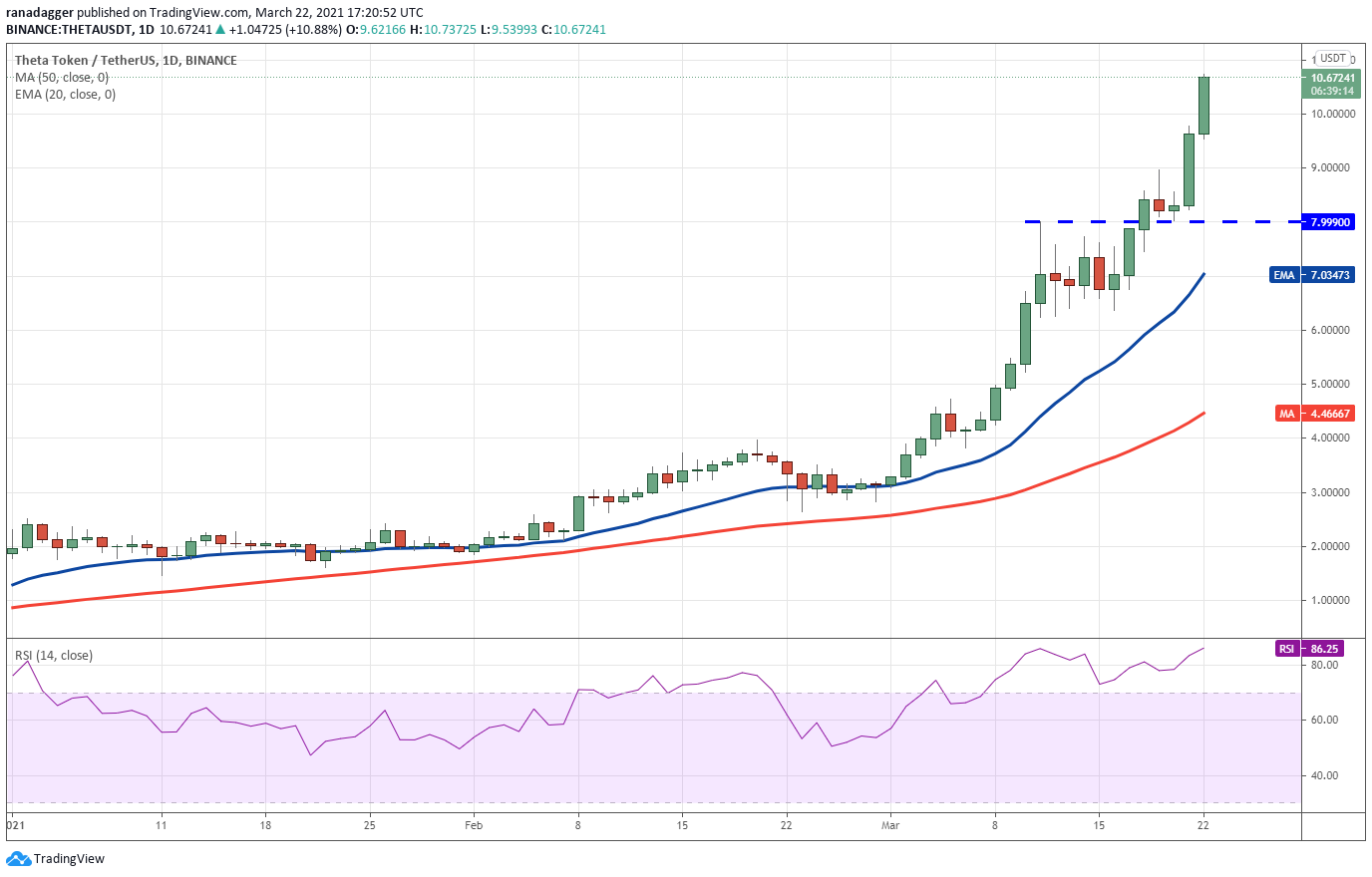 The first target objective on the upside is a rally to $11.54 where the bears may mount a stiff resistance. However, if the momentum can push the price above $11.54, the THETA/USD pair could rally to $13.19.

It is important to note that vertical rallies usually do not have longevity. Therefore, the pair could enter a few days of consolidation or a minor correction to digest the recent gains.

A shallow correction or a tight consolidation will suggest the trend remains strong and it will enhance the prospects of the uptrend resuming. A sharp correction, breaking below the $8 support may indicate the bears could be making a comeback.