These undergraduates left university to build Flux, a payments startup now in YC

Traditional remittance companies, while necessary, currently have two flaws in speed and exorbitant fees. It can take a long while (days to weeks) for money sent from an immigrant in the U.S. to reach a relative in Nigeria. The fees charged depend on the amount sent — and let’s not forget the extra charges for withdrawals and deposits.

Ben Eluan and Osezele Orukpe, two software engineers based in Nigeria, faced this problem in 2019. They had executed a project for a client in the U.K. and when the time came for them to get paid, they settled with Skrill. However, it took a week for the friends to get their money, and they lost a considerable chunk of it to charges.

“The experience made us think of the payments and, more importantly, cross border payments,” Eluan said to TechCrunch. “The gig economy and the service economy for small businesses economy is very massive, and we care about it enough to dedicate all our time into building payments for Africa.”

Over the last three years, crypto remittance companies have emerged to fill in this need, as well. Via an application and from a wallet, people can convert fiat into crypto and send it to the wallets of people in other countries who convert back to fiat if they choose. That’s the same proposition Eluan (CEO), Orukpe (CTO) and the team have with their product, Flux. The crypto remittance company was built to enable merchants to send and receive money from anywhere in the world, Eluan tells me.

He adds that what differentiates Flux from other crypto remittance startups lies in the ease and speed of the platform’s transactions. He claims that facilitating payments on Flux is 100x faster than fiat, and is cheaper too. The platform charges $0.50 for every transaction, regardless of the amount.

In May 2020, Flux got accepted into Pioneer, an accelerator launched by ex-YC partner Daniel Gross. Pioneer gives founders access to funding streams and talent hardly found outside Silicon Valley. It has already backed more than 100 founders who give up 1% equity to join the accelerator. Depending on their progress, Pioneer can decide to give either $20,000 for 5%, $100,000 for 5%, or $1 million for 10%.

After the program, Flux subsequently raised $77,000 pre-seed investment from different investors — Hustle Fund and Mozilla, among others.

Eluan says the six-month-old company has 5,000 customers who have transacted over $750,000 in payments volume. According to the CEO, the startup is growing 40% month-on-month and has made $25,000 in revenue.

The company witnessed this growth despite the Central Bank of Nigeria’s clampdown on crypto exchange activities. The country’s apex bank ordered local banks to stop aiding crypto transactions. This meant that crypto users on Flux and other crypto platforms could no longer convert fiat to crypto using their bank accounts or cards.

“We had to be compliant because of the CBN policy and our customers can’t really convert their crypto to fiat but can still transact their crypto. This is why we want to make Flux available in the US and UK, where people can use Flux and send money to Nigeria. It’s currently not available but that’s what we’re building and is the next phase of our application,” he said.

The team is also working on a peer-to-peer feature that will see users seamlessly transact crypto and fiat with one another. The company has launched Flux Merchants, a product that allows merchants to accept payments by creating payment links for their products and services.

Eluan, Orukpe, Israel Akintunde (VP, Engineering) and Ayomide Lasaki (head of Marketing) — met in their freshman year at Obafemi Awolowo University (OAU) in Ile-Ife, Osun. Studying various engineering disciplines, the four friends formed a “programming club” with other software developers on campus where they would basically meet to write code and make applications. Eluan even tells me they regularly skipped class for these sessions.

Before Flux, the friends built an e-commerce platform called Joppa that helped people find merchants around them within the city. Although they had 20,000 users, Eluan says the team didn’t understand the dynamics of what it entailed to run a startup, so the business had to shut down.

A factor that eventually led to founding Flux was the university’s budding tech talent ecosystem, which is teeming with stories of prominent startups launched by alumni. Some include Jobberman, Africa’s largest recruitment site; Kudi and Cowrywise, two YC-backed companies; and Techstars company Farmcrowdy among others.

“These founders came from our school and it was a huge motivation for us. We always knew that we wanted to build something but we weren’t sure what this would be. We eventually landed on Joppa, then Flux,” Eluan added.

In fact, according to Techpoint Africa, OAU alumni have founded startups that have cumulatively raised $1 million more than other alumni from other universities in West Africa. Think of OAU as the region’s Stanford University. 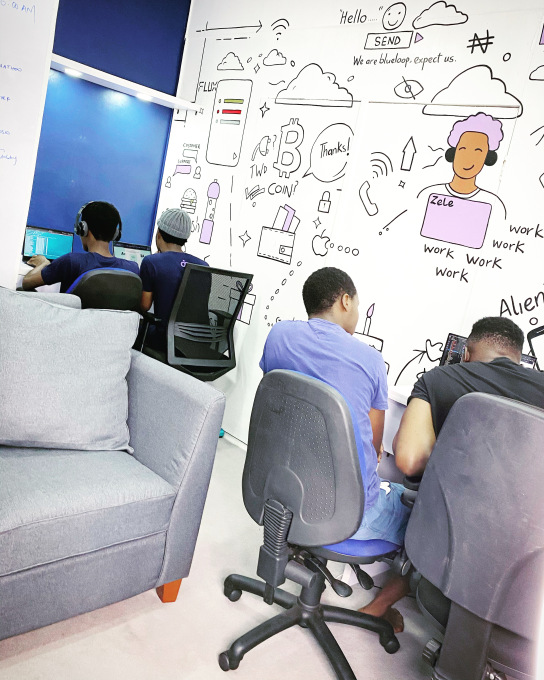 However, unlike others, the founders dropped out of the university to start Flux.

“We dropped out to focus on our startup and scaling it into a $1 billion company. We believe the opportunity here is huge. So for us, the right thing to do is to get the job done well. Startups need time so dropping out was inevitable,” he said.

Not only are they the first set of African founders that are all dropouts to get into Y Combinator, but they’re arguably the youngest. It is a feat Flux is thrilled about, and Eluan believes it will open the doors for more young founders on the continent.

“Well, we are excited about that, and it simply means brilliant young people in Nigeria and Africa can definitely go ahead to build stuff and get funded too just like founders from the U.S.,” he said.

But while their acceptance into Y Combinator is a much-needed validation for their work and sacrifice, there’s still a lot of work to be done. The startup, now based in Lagos, is playing in a competitive payments space. Different companies like Chipper Cash, Flutterwave, MFS Africa and other crypto startups are trying to fix cross-border payments, and there’s a race against time to capture market share. Hopefully, YC, Pioneer, other backers, and the team’s understanding of the market will propel Flux to dominance.