Nonfungible tokens (NFTs) have been the talk of the town over the past few months, but as the start of the second quarter gets underway for the global financial markets, it possible that traders may start looking for opportunities in other parts of the crypto market.

Oracle projects are one sub-sector that has been making moves over the past few weeks as some traders shift their focus away from NFTs. 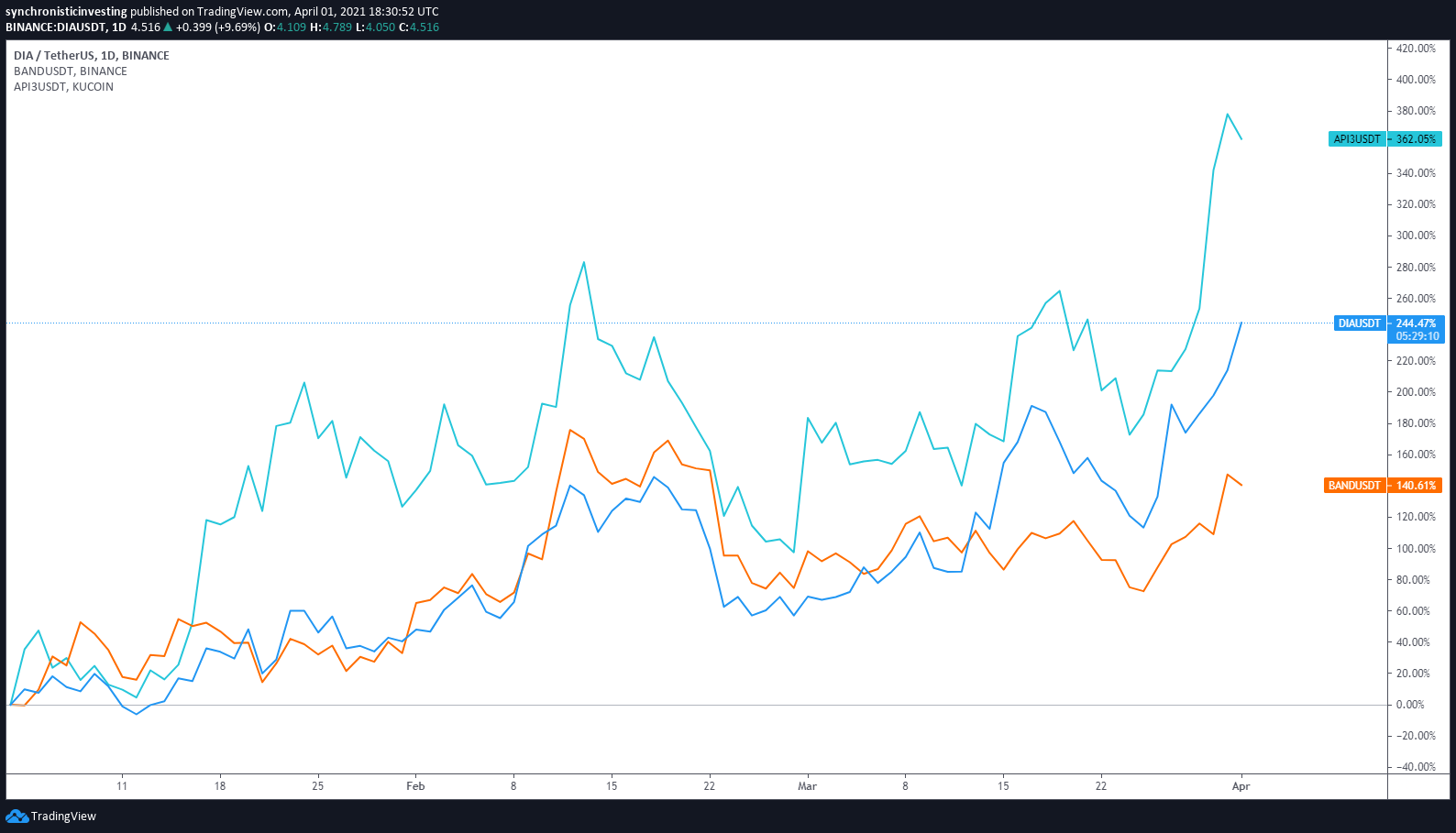 As shown above, Band Protocol (BAND), API3 and DIA are three oracle projects that have entered sharp rallies over the past week.

Band Protocol is a cross-chain data oracle platform that operates on the Cosmos (ATOM) network. The protocol aggregates real-world data and APIs and supplies the data to on-chain applications and smart contracts in order to facilitate the exchange of information between on-chain and off-chain data sources. 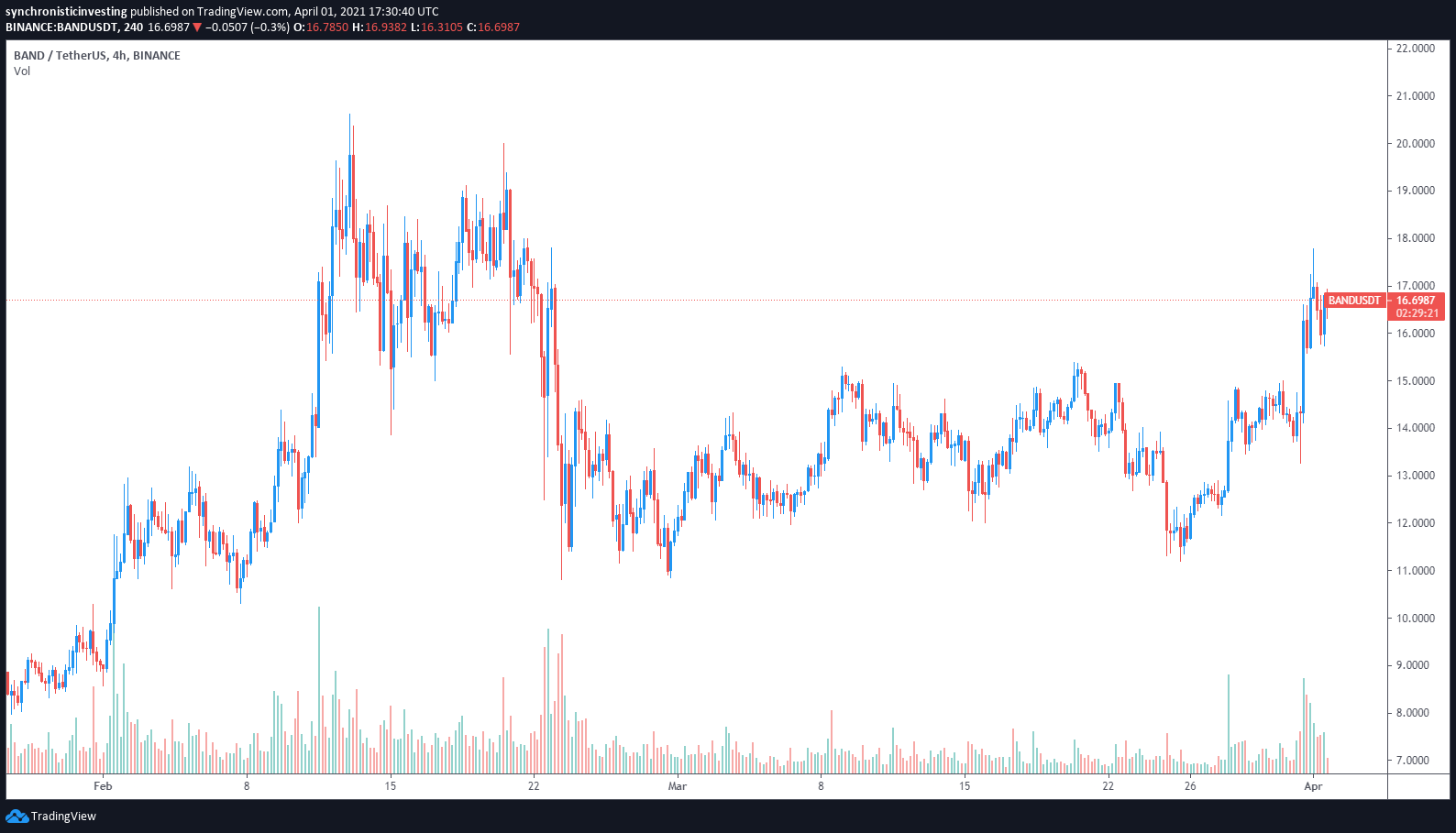 Activity for protocol began to pick back up on March 26 after it was revealed that the team was instrumental in bringing VeChain (VET) to Linear Finance (LINA). The developers also announced that they would continue to assist in bringing new assets to the LINA ecosystem.

The subsequent revelation that BAND had partnered with SCB 10X, one of the biggest financial institutions in Thailand, brought further momentum to the token and pushed it to a high of $17.78 on April 1, an increase of 60% over the past week.

API3 is a DAO-governed oracle project focused on the creation of fully decentralized, blockchain-native APIs (dAPI) that aggregate data from first-party oracles.

Price action for the token began to pick up on March 1 and continued to build throughout the month as the protocol announced multiple new partnerships including collaborations with Option Room, Royale Finance (ROYA), MobiFi and Bridge Mutual (BMI). 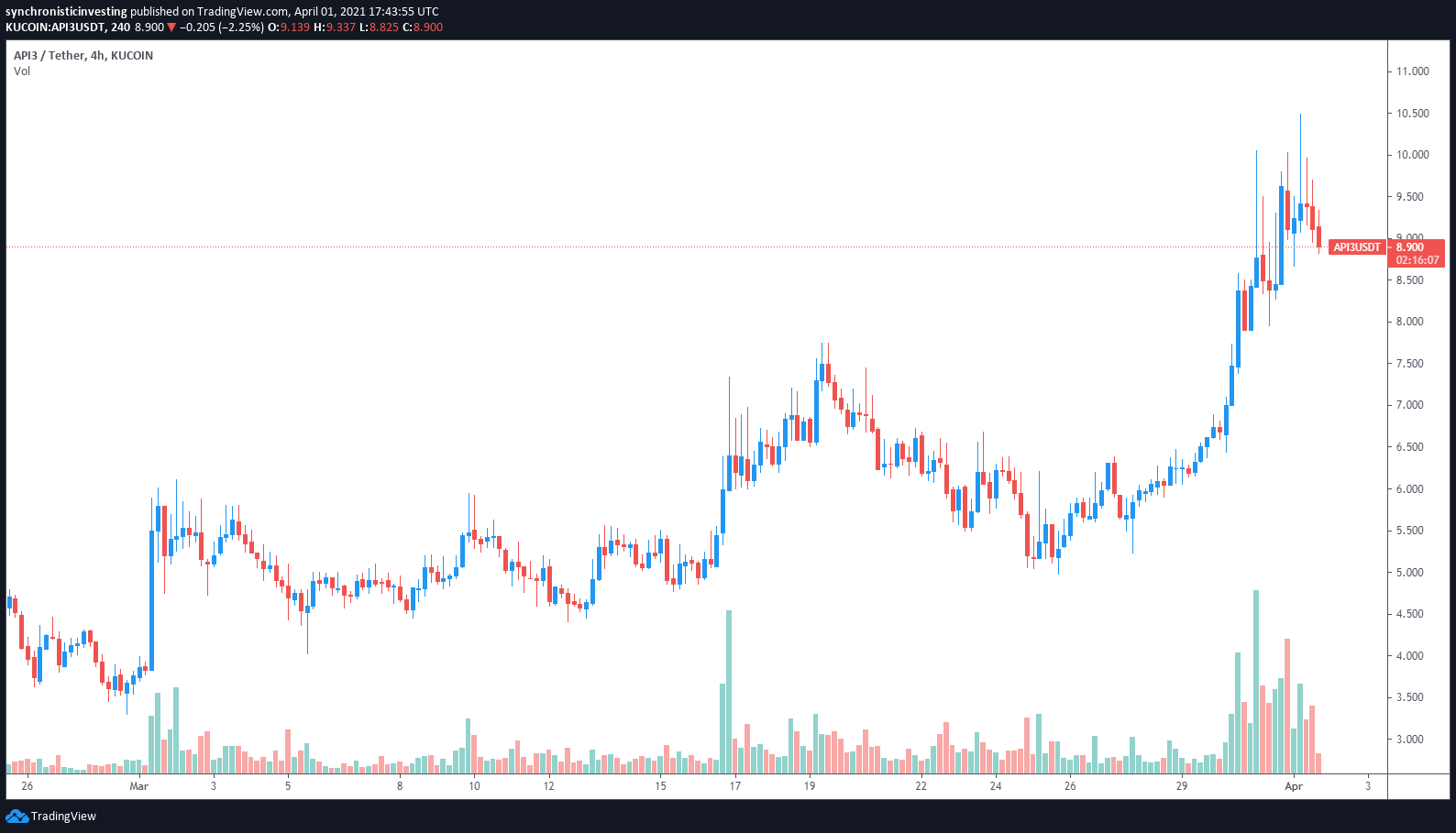 DIA is an open-source data and oracle platform for the DeFi ecosystem that enables market participants to source, supply and share trusted data. Essentially, the protocol provides a reliable and verifiable bridge between off-chain data from various sources and on-chain smart contracts that can be used to build a variety of financial DApps.

The platform brings data analysts, data providers and data users together to create a space for open financial information in a smart contract ecosystem that is like the Wikipedia of financial data. 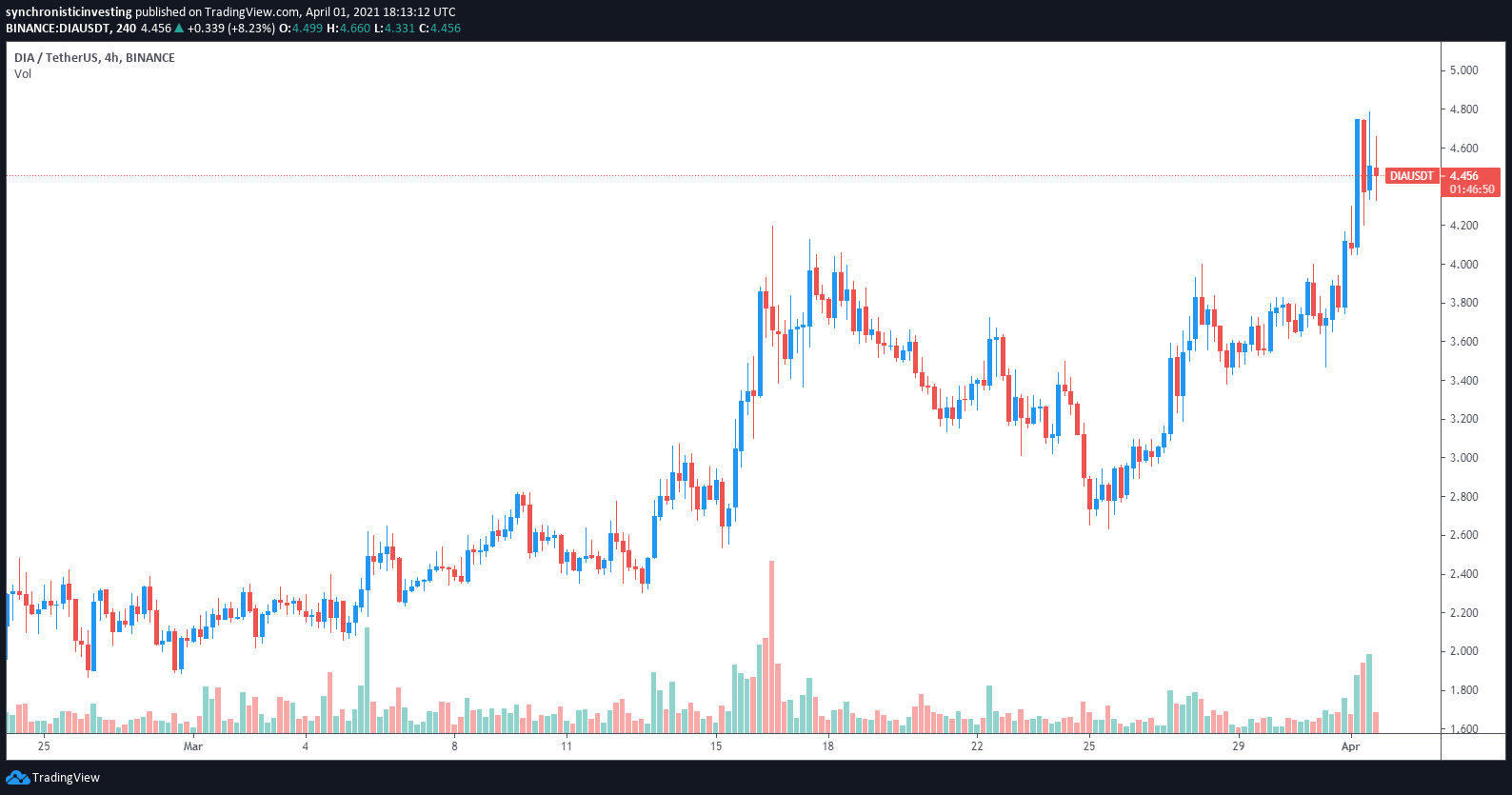 After dropping to a low of $1.87 on Feb. 28, DIA revealed multiple partnerships in March, including an integration with the Polkadot (DOT) parachain Moonbeam. This resulted in the price of DIA climbing 150% to a high of $4.79 on April 1.

Another potential catalyst for the current rally came shortly after the launch of the DIA Univesity Student network on March 12.

We are delighted to announce the launch of the DIA University Student Network, a global network of elite universities to foster knowledge exchange between academia and DeFi and collaborative research into #DeFi and #oracles.https://t.co/tjsg4nB5Wyhttps://t.co/YJFoIKWq2G

In total, DIA announced partnerships with eight different blockchain projects and companies during the month of March, indicating that the team is serious about its goal to create a cross-network oracle system that provides trusted data for the cryptocurrency ecosystem.

Oracles now appear poised to continue the uptrend that began in January as blockchain technology and cryptocurrencies gain additional attention from investors and the business sector.

With the hype behind NFTs beginning to subside, oracle tokens could be the next group to entice investors and break out to new all-time highs.