Holger Zschaepitz, a market analyst at Welt, emphasized that Bitcoin (BTC) is nearing the valuation of Google, as it heads toward $1.5 trillion in market capitalization.

Currently, as of April 17, the market cap of Bitcoin is hovering at around $1.12 trillion as the entire valuation of the crypto market remains comfortably above $2 trillion.

What is the similarity between Bitcoin and Google?

The similarity between Bitcoin and Google that Zschaepitz pointed out is that both have dominance in their respective sectors. 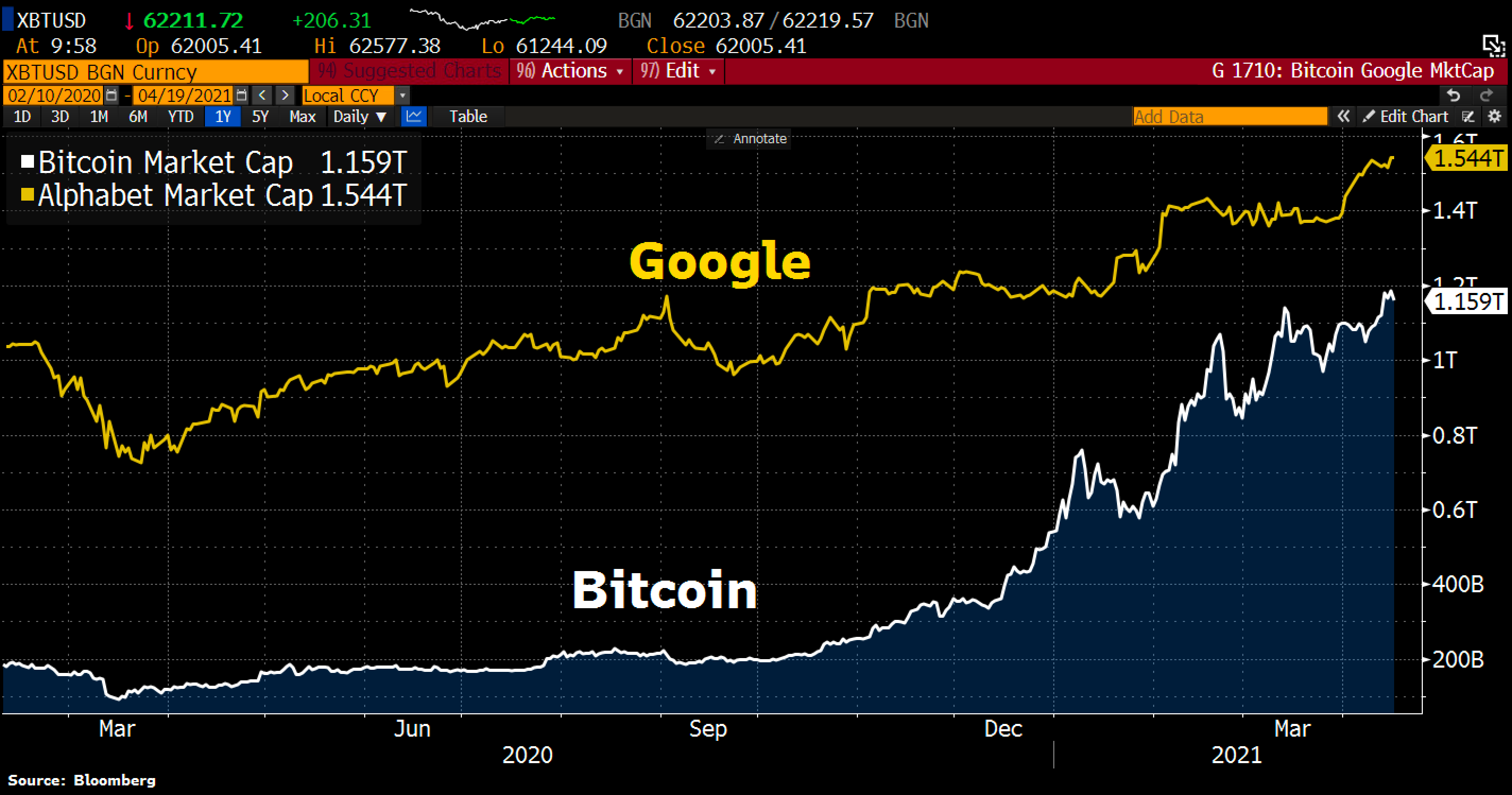 Google has dominance over the search engine market and has a massive share of the video-sharing and streaming sector with its ownership of YouTube.

“The Exponential Age: Thanks to network effects, the value of #Bitcoin is increasing and w/$1.159tn has almost reached the stock market value of a classic network share #Google which is worth $1.5tn.”

Whether Bitcoin’s dominance over the cryptocurrency market would be sustained over the long term remains in question, due to the rising valuation of Ethereum and layer-one blockchain networks.

However, the major difference between Bitcoin and the rest of the market is that there is clear institutional demand for BTC as a store of value due to its unrivaled blockchain network computing power and therefore, security and trustlessness.

Hence, investors generally view Bitcoin as a hedge against inflation and the de facto reserve cryptocurrency.

In January, JPMorgan strategists wrote that Bitcoin could rise to as high as $146,000 as it competes against gold as a store of value.

Traditional financial institutions are also acknowledging the importance of Bitcoin’s network effect and its dominance in the crypto market as the go-to store of value.

Where is the price of Bitcoin heading from here?

In the foreseeable future, the sentiment around Bitcoin remains mixed after the public listing of Coinbase.

Following the listing of COIN, there is speculation that it could mark the top of the crypto market.

However, most on-chain data and market indicators such as funding rates do not necessarily suggest that a blow-off top is near.

“I read many people saying that funding is high, not only in Bitcoin, but also in altcoins. This is relative. If we compare the current funding levels with those of the top of 2017, we see that they are low levels, taking into account that the price is three times higher. Also, the current trend is led by spot trading, and not by derivatives.”

Meanwhile, key on-chain metrics also suggest that Bitcoin price is still far from the bull market top. On the contrary, BTC price may easily reach six figures, as forecast on the popular stock-to-flow model, and even go as high as $400,000, according to Bloomberg analysts.