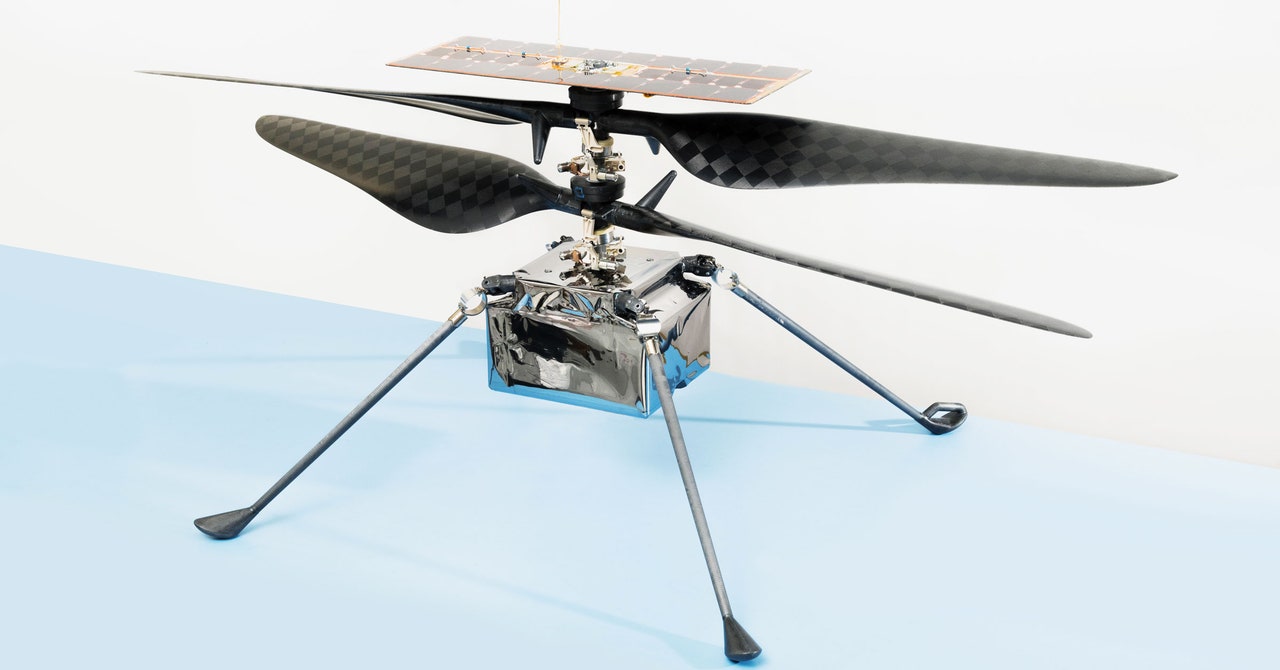 Very early this morning, NASA flew a small drone helicopter that its latest rover had toted to Mars, marking humankind’s first controlled and powered flight on another planet. Ingenuity stuck the landing—and space engineers are stoked.

“We’re ecstatic, of course,” said Matthew Golombek, a senior research scientist with NASA’s Jet Propulsion Lab, during a call with WIRED shortly after the Ingenuity team learned of the success. The data that trickled into JPL computers early Monday morning was “nominal,” he said—NASAspeak for a best case scenario. “Any time you’ve successfully landed a spacecraft, it’s a pretty good moment,” Golombek said.

Ingenuity ascended about one meter per second, until it rose three meters—about 10 feet above Mars. The helicopter hung as evenly as its state-of-the-art electronics could allow, and then landed where it had been 40 seconds before. Then, Ingenuity pinged its Earth-bound engineers a message they’ve sought for almost a decade: Mission accomplished. The hovering drone sent back a black and white video of its own shadow, and the Perseverance rover’s high-resolution camera snapped shots of the flight and landing from a distance.

“We can now say that human beings have flown a rotorcraft on another planet,” MiMi Aung, the project manager, told her team after the flight as she stood in front of giant wall art that read DARE MIGHTY THINGS, the message that had also been encoded into the rover’s descent parachute.

The machines humankind has sent to Mars have gotten increasingly sophisticated since the first rover, Sojourner, rolled in 1997. That robot put the first wheels on Mars, and its cousins, Spirit, Opportunity, and Curiosity, followed carrying their suites of science experiments. But Perseverance—the largest of the bunch, which landed in February—has driven around the Red Planet with a helicopter in its belly. Ingenuity is NASA’s first attempt at flying a drone on another planet. The space agency and the contractors who participated in its design want to glean lessons from its flight data to design bigger exploratory flyers for future missions.

Ingenuity looks like a shiny four-legged mosquito rocking two helicopter blades and a solar panel on its head. It’s about two feet tall and its 15-inch legs keep it upright on jagged alien terrain. Its four-foot-wide carbon-fiber rotor blades spin ultra fast to carry a body just big enough to house a battery, sensors, cameras, and the brain that makes each element work in concert.

Flying on Mars is way different than flying on Earth. Gravity is 62 percent weaker there, but the atmosphere is 99 percent thinner and provides much less lift. It would be like flying a helicopter at an altitude of 100,000 feet on Earth, where the record for high flying is less than 41,000 feet for a helicopter and 85,000 for a plane. Ingenuity’s rotor blades spin at up to 2,537 rotations per minute to make up for it—that’s about five times faster than helicopter blades whirl on Earth.

Because of its thin atmosphere, daily temperatures on Mars can swing by over 150 degrees, which makes the air density highly variable. Engineers had to account for this unreliable air cushion. “At sea level here on Earth, the pressure doesn’t change by that much,” said Ben Pipenberg, an aeromechanical engineer with AeroVironment. The California aircraft company has been working with JPL since 2013 to bring the helicopter idea to life. But on Mars, he continues, “From our current operating point, we can vary the operating pressure by about 30 to 40 percent up or down and still fly fine.”

Each piece of the copter is crafted to maximize function and minimize weight. The blades weigh a total of 70 grams, less than a deck of cards. The whole $85 million drone weighs about four pounds—less than a gallon of ice cream.