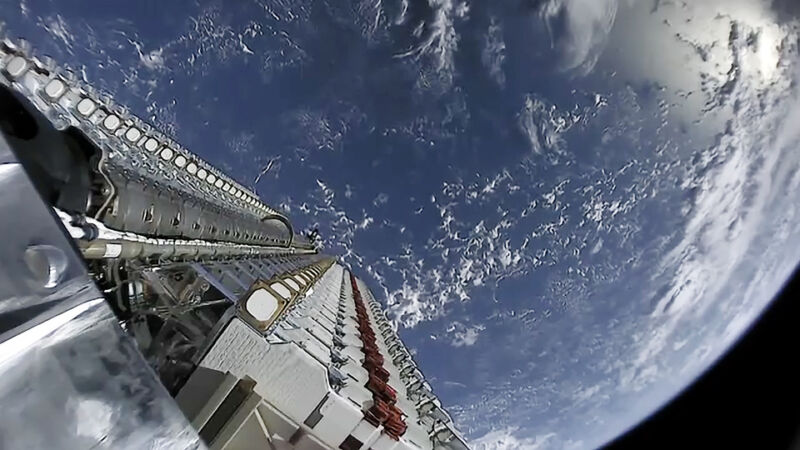 Enlarge / A stack of 60 Starlink satellites launched in 2019.

SpaceX has accused satellite-broadband rival OneWeb of spreading a false story claiming that the companies’ satellites nearly crashed into each other.

In reality, “[t]he probability of collision never exceeded the threshold for a [collision-avoidance] maneuver, and the satellites would not have collided even if no maneuver had been conducted,” SpaceX told the Federal Communications Commission in an ex parte filing. The filing describes a meeting that SpaceX and OneWeb representatives had with FCC staff yesterday in which SpaceX said it “corrected the record regarding recent press reports regarding physical coordination between SpaceX and OneWeb.”

Starlink satellites have come alarmingly close to other spacecraft twice in the last two years, including on April 2, when a Starlink satellite prompted another operated by OneWeb, controlled by Indian conglomerate Bharti Global and the UK government, to make evasive maneuvers, according to OneWeb and the US Space Command.

Mr. Musk’s satellites are equipped with an AI-powered, automated collision avoidance system. Yet that system had to be switched off when a Starlink satellite came within 190 feet of the rival’s satellite this month, according to OneWeb’s [government affairs chief, Chris] McLaughlin.

When contacted by OneWeb, Starlink’s engineers said they couldn’t do anything to avoid a collision and switched off the collision avoidance system so OneWeb could maneuver around the Starlink satellite without interference, according to Mr. McLaughlin.

The Journal said that “SpaceX didn’t reply to requests for comment” about the OneWeb incident and another event from 2019 in which the European Space Agency said it performed a collision-avoidance maneuver to avoid a SpaceX satellite.

The Journal also quoted McLaughlin as saying, “SpaceX has a gung-ho approach to space… Every one of our satellites is like a Ford Focus—it does the same thing, it gets tested, it works—while Starlink satellites are like Teslas: They launch them and then they have to upgrade and fix them, or even replace them altogether.”

In yesterday’s filing to the FCC, SpaceX said that “OneWeb’s head lobbyist recently made demonstrably inaccurate statements to the media about recent coordinations of physical operations. Specifically, Mr. McLaughlin of OneWeb told the Wall Street Journal that SpaceX switched off its AI-powered, autonomous collision avoidance system and ‘they couldn’t do anything to avoid a collision.’ Rather, SpaceX and OneWeb were working together in good faith at the technical level. As part of these discussions, OneWeb itself requested that SpaceX turn off the system temporarily to allow their maneuver, as agreed by the parties.”

See OneWeb filing]. Ironically, the conditions demanded by OneWeb would make it more difficult to successfully coordinate difficult operations going forward, demonstrating more of a concern with limiting competitors than with a genuine concern for space safety.

We contacted OneWeb about SpaceX’s filing today and will update this article if we get a response. There was no OneWeb response to SpaceX’s filing in the FCC docket as of today.

SpaceX’s filing has an attachment with a fact sheet and timeline describing the incident with OneWeb. It said that the “recent technical coordination with OneWeb was not an exceptional event and the Starlink team has successfully conducted similar coordinations with other satellite owner/operators.” The “probability of conjunction” was initially estimated at between 1 in 10,000 and 1 in 100,000, SpaceX wrote.

OneWeb contacted SpaceX via email on April 1. “SpaceX responded within minutes and communicated to OneWeb that Starlink-1546 was/is maneuverable,” SpaceX told the FCC. During a phone call the next day, “SpaceX volunteered to perform a manual maneuver, but both parties agreed to wait for the next CDM [conjunction data message],” SpaceX wrote.

SpaceX and OneWeb had a second call less than two hours later, in which “SpaceX reiterated its recommendation to wait for another CDM… before planning a maneuver because SpaceX systems indicated this was the least risky approach.” However, “OneWeb satellites need more time to coordinate and plan their maneuvers than Starlink satellites require, so OneWeb did not want to wait and chose instead to maneuver OneWeb-0178,” SpaceX wrote. “Because OneWeb decided to plan a maneuver, it asked SpaceX to turn off Starlink-1546’s autonomous conjunction avoidance system. SpaceX obliged this request and confirmed to OneWeb that the system had been turned off.”

Further data showed that “the probability of collision was already below any threshold that required a maneuver and kept dropping,” SpaceX wrote. OneWeb performed the maneuver on April 3, and the satellites ended up missing each other by more than 1,000 meters, SpaceX wrote. The final probability of collision was “one in one hundred million million million—this was not a close call or a near miss,” SpaceX told the FCC.