Ford’s ever-smarter robots are speeding up the assembly line 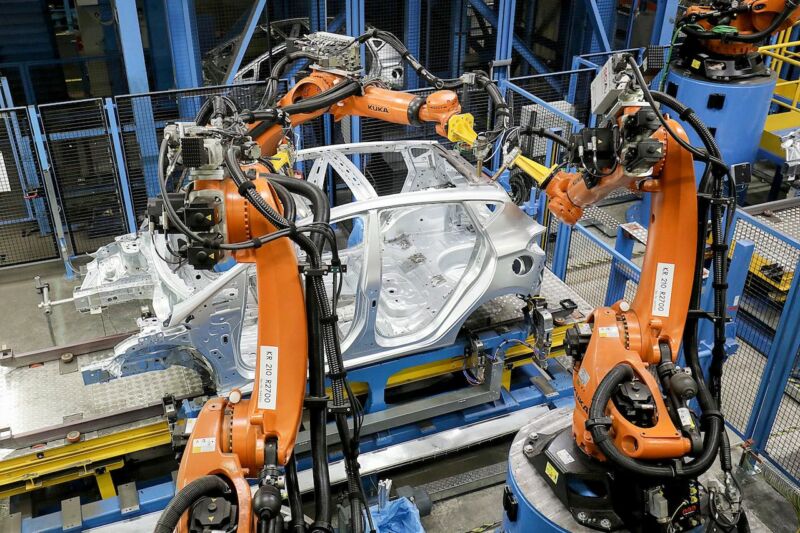 In 1913, Henry Ford revolutionized car-making with the first moving assembly line, an innovation that made piecing together new vehicles faster and more efficient. Some hundred years later, Ford is now using artificial intelligence to eke more speed out of today’s manufacturing lines.

At a Ford Transmission Plant in Livonia, Mich., the station where robots help assemble torque converters now includes a system that uses AI to learn from previous attempts how to wiggle the pieces into place most efficiently. Inside a large safety cage, robot arms wheel around grasping circular pieces of metal, each about the diameter of a dinner plate, from a conveyor and slot them together.

Ford uses technology from a startup called Symbio Robotics that looks at the past few hundred attempts to determine which approaches and motions appeared to work best. A computer sitting just outside the cage shows Symbio’s technology sensing and controlling the arms. Toyota and Nissan are using the same tech to improve the efficiency of their production lines.

The technology allows this part of the assembly line to run 15 percent faster, a significant improvement in automotive manufacturing where thin profit margins depend heavily on manufacturing efficiencies.

“I personally think it is going to be something of the future,” says Lon Van Geloven, production manager at the Livonia plant. He says Ford plans to explore whether to use the technology in other factories. Van Geloven says the technology can be used anywhere it’s possible for a computer to learn from feeling how things fit together. “There are plenty of those applications,” he says.

AI is often viewed as a disruptive and transformative technology, but the Livonia torque setup illustrates how AI may creep into industrial processes in gradual and often imperceptible ways.

the decision to rely more heavily on automation in manufacturing.

Researchers and startups are exploring ways for AI to give robots more capabilities, for example enabling them to perceive and grasp even unfamiliar objects moving along conveyor belts. The Ford example shows how existing machinery can often be improved by introducing simple sensing and learning capabilities.

“This is very valuable,” says Cheryl Xu, a professor at North Carolina State University who works on manufacturing technologies. She adds that her students are exploring ways that machine learning can improve the efficiency of automated systems.

One key challenge, Xu says, is that each manufacturing process is unique and will require automation to be used in specific ways. Some machine learning methods can be unpredictable, she notes, and increased use of AI introduces new cybersecurity challenges.

The potential for AI to fine-tune industrial processes is huge, says Timothy Chan, a professor of mechanical and industrial engineering at the University of Toronto. He says AI is increasingly being used for quality control in manufacturing, since computer vision algorithms can be trained to spot defects in products or problems on production lines. Similar technology can help enforce safety rules, spotting when someone is not wearing the correct safety gear, for instance.

Chan says the key challenge for manufacturers is integrating new technology into a workflow without disrupting productivity. He also says it can be difficult if the workforce is not used to working with advanced computerized systems.

This doesn’t seem to be a problem in Livonia. Van Geloven, the Ford production manager, believes that consumer gadgets such as smartphones and game consoles have made workers more tech savvy. And for all the talk about AI taking blue collar jobs, he notes that this isn’t an issue when AI is used to improve the performance of existing automation. “Manpower is actually very important,” he says.