A senior manager at banking giant Goldman Sachs in London has reportedly left the company after making a fortune on a meme-based cryptocurrency, Dogecoin (DOGE).

Aziz McMahon, a former managing director and head of emerging market sales at Goldman Sachs, had resigned from the investment bank, allegedly after netting major gains from his DOGE holdings, The Guardian reports Tuesday.

Though reports did not specify exactly how much money McMahon made from his Dogecoin holdings, sources claimed that it was a substantial sum, pointing out that DOGE rallied over 1,000% in value this year.

According to sources, the finance veteran was investing in crypto using a personal account and was not involved in trading cryptocurrencies for Goldman Sachs.

McMahon did not immediately respond to Cointelegraph’s request for comment.

Dogecoin has been repeatedly recording major milestones recently, outstripping the largest cryptocurrency Bitcoin (BTC) in the number of related internet search queries. Since the beginning of 2021, Dogecoin has emerged as the fastest-growing digital currency, posting up to 13,500% growth year-to-date, surging from just $0.005 to an all-time high of $0.68 on May 7, according to data from CoinMarketCap. 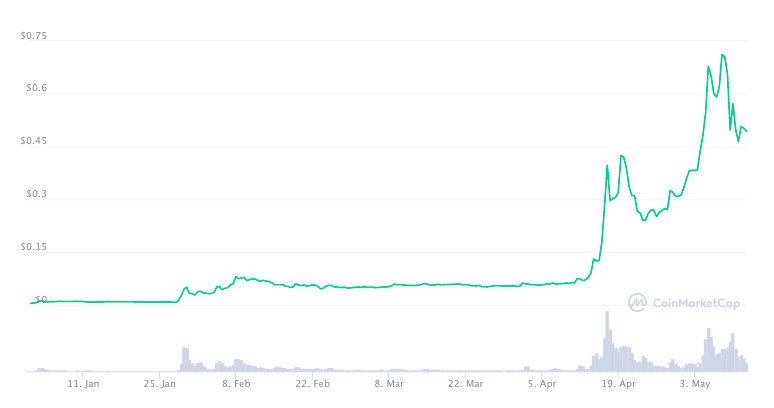 Launched back in 2013 by IBM software engineer Billy Markus and Adobe engineer Jackson Palmer, Dogecoin is a cryptocurrency based on the popular “Doge” meme featuring a Shiba Inu and was created as a joke.

Another dog-based cryptocurrency has been surging recently. After breaking new all-time highs yesterday, Dogecoin imitator Shiba Inu (SHIB) subsequently saw a 13% slump to trade at $0.000028 at the time of writing.