The organizer of The Robin Hood Group — which once stole 10% of all circulating ETH from under a black hat hacker’s nose — wants to change the way we think about charity.

A former chemical engineer, Griff Green, 36, traded in his savings for precious metals, which he used to travel the world for years before settling as a Bitcoin missionary in Ecuador. He led a white hat hacker war against the infamous black hat hacker of The DAO, and he organizes cryptocurrency camps at Burning Man to spread the word about crypto — while dressed as Santa and riding a massive metal Doge.

His next big mission, with the blockchain-based charity initiatives Giveth and Commons Stack, is to transform the game of economics into one in which donations transform into investments… investments that can even wind up with the donor making a profit.

The morning of June 17, 2016, was a pivotal day in cryptocurrency — it was the day The DAO was hacked. The DAO was arguably the first major decentralized autonomous organization, having raised 14% of all circulating Ether in existence at the time from over 11,000 investors in May 2016. It functioned as an investor-driven venture fund, with tokenholders able to vote on investment proposals.

But a malicious actor found an exploit allowing funds to be progressively drained from The DAO’s accounts. Green quickly organized his white hat hacker collective, The Robin Hood Group, to launch a counteroffensive. 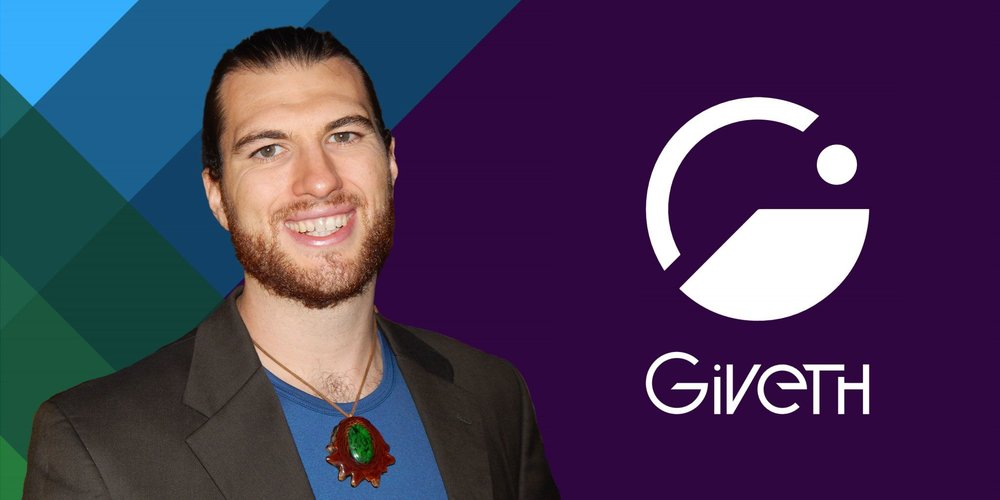 One week later, Green would be among the first nine graduates from the University of Nicosia’s Master’s in Digital Currency program. He was hired by Slock.it, a company developing on Ethereum, as a community manager responsible for organizing and educating The DAO’s community.

Green jumped onto a Slack channel for The DAO’s investors, imploring them not to panic as his team rushed to drain what was left of the project’s holdings before the attackers could. He encouraged users to spam the network as much as possible to slow it down and increase gas fees, making it harder for the real hacker:

“The DAO is being attacked. It has been going on for 3-4 hours, it is draining Ethereum at a rapid rate. This is not a drill… We need to spam the Network so that we can mount a counter attack all the brightest minds in the Ethereum world are in on this.”

At the same time, his team started replicating the hacker’s attacks for itself, draining The DAO’s wallets of ETH before the hacker could take it.

“We were taking a huge risk,” Green acknowledges regarding the legality of preemptively stealing tens of millions in Ether so the hacker couldn’t. The Ethereum chain was controversially forked following the hack in order to “turn back time“ to before the hack, but Ethereum Classic emerged as a still-valuable token. This meant that Green and crew effectively held 10% of all ETC with the funds they had stolen.

Legal threats started pouring in, telling the group that the ETC should be distributed, despite the fact that “We were just normal people, we didn’t have a company,” he says looking back. All the members of the group jumped on planes and “flew to Switzerland to figure out legal representation, and it was the first time we all met in person.” Eventually, the funds were returned through a DApp that Green’s team coded. 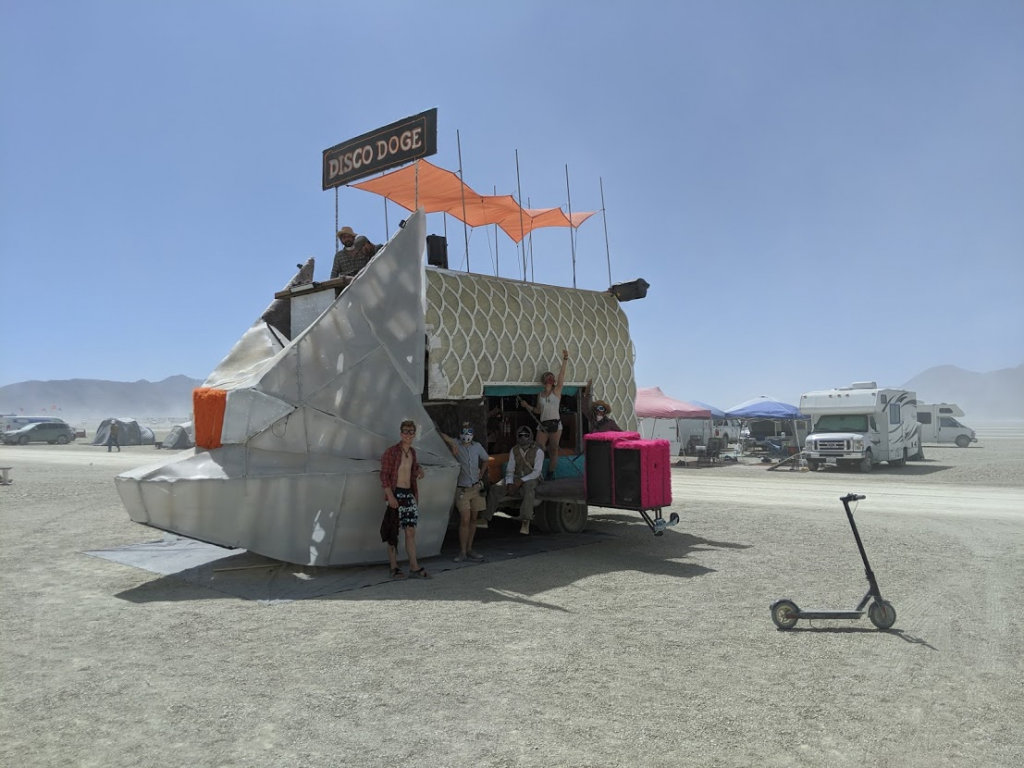 About a year later in November 2017, the team had similar success rescuing $210 million from the Parity multisig wallet hack. “We wanted to tell everyone, ‘Hey, guess what? We stole all this money, but you can trust us because we already gave back all the money in The DAO,’” Green recalls. But he explains that this was risky for the now-public team because anyone could use Google to find out where they — and thus, the private keys — could be found. That night, Green “slept on a mattress with a baseball bat in front of the door,” fearing someone might come to take the keys by force.

Hacking is not the only way in which Green has put himself at risk in the name of his principles. When the autonomous region of Catalonia attempted to vote for independence from Spain in 2017, Green went to a polling station to act as a human shield to protect the electoral process from “the police, who were beating people to steal the ballots.” This experience convinced Green that decentralized governance on the blockchain can only work efficiently if people are able to run their nodes without relying on centralized internet providers. The result was DAppNode, which helps people around the world set up peer-to-peer infrastructure. 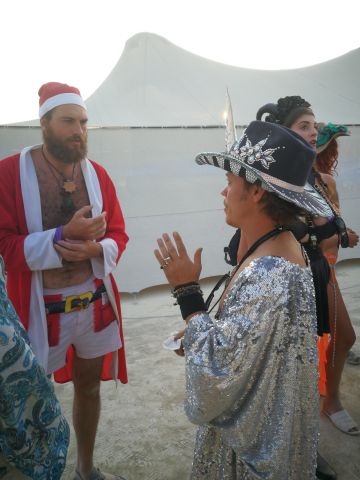 From engineer to Ecuadorian evangelist

Green was born in Spokane, Washington, where he graduated from high school in the mid-2000s. He was interested in designing planes and rocketships but decided not to pursue mechanical engineering after he realized that much of the industry was oriented toward military applications. Instead, he went into chemical engineering at the University of Washington in 2003.

At the end of his studies in 2006, he interned at biopharmaceutical firm Amgen, where he helped “genetically engineer Chinese hamster ovary cells to produce human proteins,” he recalls, describing a “creepy process” in a laboratory filled with vats of blood. Later, he worked as a research assistant at his alma mater, turning algae into carbon-neutral fuel.

He soon found himself employed as an “organizer of a really weird political movement in Seattle” called “Save Our Sonics“ trying to lobby the local government to keep NBA basketball team the Seattle SuperSonics from relocating to Oklahoma. His efforts ended with disappointment when the mayor “sold the team away anyway with just the stroke of a pen,” just as a judge was about to rule in the team’s favor. This left Green with an “impression of political movements being outmatched and outgunned” by corrupt elites. 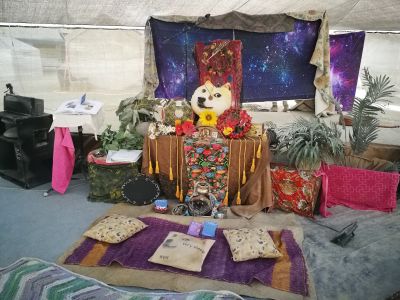 An alter to DOGE at Burning Man. (Pic: Elias Ahonen)

In 2007, Green joined SNC-Lavalin, a large construction and engineering firm, as a process engineer where he “had an ethical dilemma” regarding a job requirement to create a structure that sent highly acidic water into the ocean in a country with weak environmental regulations. He “tried to tweak the calculation a little bit” in order to decrease the pollution level and give the ocean ecosystem a break. His suggestions were not accepted, and “Now, there’s a pipe that I designed pumping shit into the ocean, and that really weighs on me,” he says in a somber manner.

When layoffs came around in 2008, he had been putting his paychecks into gold and silver, as he had recently started “feeling like the whole system is a corrupt conspiracy.” He bought a pop-top van that he drove to Burning Man, a counterculture event held each summer in the Nevada desert. Something about the experience inspired him to see the world, and he took off on an adventure that never ended — precious metals in tow.

He traveled around, volunteering in Ecuador and Columbia the first year and India and Southeast Asia the next, always returning “home“ to Burning Man in August. Along the way, he learned about Bitcoin and bought some with $3,000 worth of gold.

In 2013, his BTC “went to $24,000 — I was used to living really cheaply, like $3 per night hostels with cold showers,” he recalls. Green saw potential and became so obsessed with Bitcoin that he told his girlfriend, “You’re great and all, but I like Bitcoin more, and I’m going to Ecuador, and I’m going to be the Andreas Antonopoulos of Ecuador,” referring to a desire to bring cryptocurrency to the country with which he had fallen in love during his travels.

“I became obsessed. My girlfriend got jealous — we literally broke up because she was jealous of Bitcoin.”

In Ecuador, Green went around college campuses, popping into random computer science classes to give presentations about Bitcoin and teach everyone how to set up a wallet, which he would then fund with a small amount, asking each person to find three new people to send a fraction of their coins.

“I’d knock on the classroom door unannounced, and I’d be like, ‘Hey, I want to give everyone in this classroom a little bit of Bitcoin and explain it to them.’ I’d say five times out of seven, they let me in,” Green recalls with a laugh. Soon, however, he saw that Ecuador was moving to ban Bitcoin, so he abandoned his missionary post. “I had to bail,” he recounts.

Green organizes DECENTRAL and DOGECENTRAL, two cryptocurrency-themed camps at Burning Man, which is a radically oriented 10-day festival founded upon 10 principles including radical inclusion, gifting, radical self-reliance and civic responsibility. With the camps, Green aims to “build a bridge between the Burning Man community and the crypto community so there can be an exchange of ideas and culture,” something he feels “can change the world somehow.” The two communities have much in common as socially critical movements but tend toward opposing extremes regarding economic philosophy.

Swayed by his experiences in both political activism and engineering, Green is critical of the “hyper capitalism” that he sees in the cryptocurrency industry. “If all you know is capitalism, then you’re just going to do capitalism better, and I don’t know if that’s necessarily the right thing. But hey, look, there’s this gift economy!” he says, referring to what is known as the “gifting principle“ at Burning Man, where money and any kind of trade or barter is banned.

“The goal is to say, ‘Wow! Look at what economics really is — let’s go a step beyond capitalism and start looking at how we can coordinate value production.’“

Green thinks of economies like games — one can play the game in a capitalist manner to benefit themselves or they can play for the benefit of others. This desire to create an economic environment that rewards people for doing societal good inspired him to start crypto donation platform Giveth in late 2016. “What if we integrate values and culture as part of the economic system?” he ponders.

Giveth currently functions as a “transparent and traceable donation platform” where anyone can trace how their donated funds are spent. “I’d say it’s like an Indiegogo for donations,” Green says. In the coming months, there are plans to release a governance token, to be given out to all donors in accordance with their donations on the platform. These governance tokens could function like something akin to a tax return, where donors receive some money back for making donations.

Commons Stack, a Giveth spinoff that Green co-founded, is creating a “general-purpose framework for nonprofit economies” by allowing donors to effectively invest in charity-related tokens. “If more people also buy that token because they believe that this nonprofit economy is going to create value, then you as an early supporter would actually make money — the same way it works in the stock market,” Green explains. Of course, it is entirely possible that donors will never get all their money back, but Green is confident that that’s OK because “the other option is a 100% loss” of donated funds.