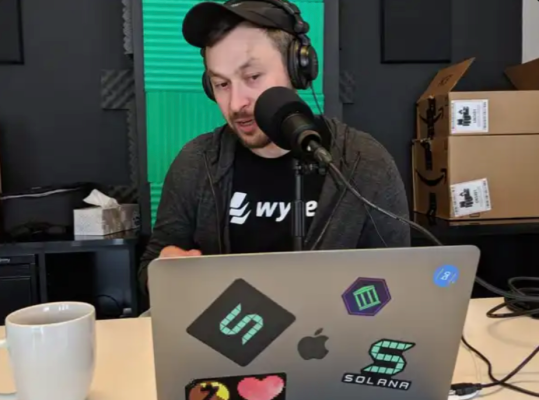 Solana isn’t known yet outside of the crypto community. But insiders think the blockchain platform is interesting for a wide variety of reasons, beginning with its amiable founder, Anatoly Yakovenko, who spent more than a dozen years as an engineer working on wireless protocols at Qualcomm and who says he had a lightbulb moment at a San Francisco cafe several years ago following two coffees and a beer.

His big idea centered on creating an historical record to speed along “consensus,” which is how decisions are made on blockchains, which are themselves peer-to-peer systems. Right now, consensus is reached on various blockchains when members solve a mathematical puzzle, a mechanism that’s called “proof of work.” These miners are rewarded for their efforts with cryptocurrency, but process takes many hours in Bitcoin’s case and days in the case of Ethereum, and it’s insanely energy intensive, which is why neither Bitcoin nor Ethereum has proved very scalable. (Bitcoin’s heavy reliance on fossil fuel is the reason Elon Musk cited earlier this week to explain why Tesla is no longer accepting Bitcoin as payment for the company’s electric cars.)

But there is another way. Indeed, crypto watchers and developers are excited about Ethereum and other currencies that are transitioning to a new system called “proof of stake,” wherein people who agree to lock up a certain amount of their cryptocurrency — say it’s Ether — are invited to activate so-called validator software that enables them to store data, process transactions, and add new blocks to the Ethereum blockchain. Like miners, “validators” do what they do to earn more cryptocurrency, but they need far less sophisticated equipment, which opens up the opportunity to more people. Meanwhile, because more validators can participate in a network, consensus can be reached faster.

Yakovenko is enthusiastic about the shift.  We talked with him yesterday, and he said it would “devastating for the entire industry” if Ethereum weren’t able to pull off its objective, given its mindshare and its roughly $500 billion market cap.

Still, he argues that not even proof of stake is good enough. His biggest concern, he says, is that even with proof of stake, miners — and bots — have advance access to transaction information that allows them to exploit users, or front run transactions, because they can control transaction ordering and profit from that power.

Enter Yakovenko big idea, which he calls “proof of history,” wherein the Solana blockchain has developed a kind of synchronized clock that, in essence, assigns a timestamp for each transaction and disables the ability for miners and bots to decide the order of which transactions get recorded onto the blockchain. It also, says Yakovenko, allows for faster block finalization and much faster consensus because the timestamps of previous transactions no longer need to be computed. “Basically, the speed of light is how fast we can make this network go,” he says.

Certainly, Solana — which has sold tokens to investors but never equity in the company — has many excited about its prospects. In recent interviews with both investor Garry Tan of Initialized Capital and CEO Joe Lallouz of the blockchain infrastructure company Bison Trails, both mentioned Solana as among the projects that they find most interesting right now. (We assume both hold its tokens.)

Others say on background that while they understand the developer benefits and need for more scaleable blockchains than Ethereum — and they think Solana is a contender for this market — Solana still needs to more developer mindshare to prove its long-term worth and it’s not there yet. According to Solana itself, there are currently 608 validators helping secure the Solana Network and 47 decentralized applications (or “dapps”) powered by Solana. Meawhile, they were reportedly 33,700 active validators helping to secure “Eth 2.0” as of late December and 3,000 dapps running on the Ethereum blockchain as of February.

In fairness, the Ethereum network went live in 2015, so it has a three-year head start on Solana. In the meantime, Solana has a lead of its own, says Yakovenko, who is based in San Francisco and has assembled a distributed team of 50 employees, including numerous former colleagues from Qualcomm. Asked about other projects that have embraced a proof of history approach, he says that while it’s “all open source” and “anybody can go do it,” there “isn’t a set of our biggest competitors saying they’re going to rework their system and use this.”

The likely reason is that it’s almost comically complicated. “It just takes a lot of work to build these systems,” Yakovenko says. “It takes two to three years to build a new layer one, and you can’t really take an idea for one and stuff it in the other one. If you try to do that, you’re going to set yourself back by six to nine months at the least and potentially introduce bugs and vulnerabilities.” Either way, he adds, “We’re the only ones that are really building this proof-of-history thing, that use a verifiable delay function as a source of time.”

Either way, Solana, which itself has a $12 billion market cap, isn’t interested in competing with Ethereum and other cryptocurrencies on every front anyway, suggests Yakovenko. All it really wants is to disrupt Wall Street and the rest of the global markets, even if he doesn’t put it that way exactly.

He knows it sounds crazy. But the way he sees it, what Solana is building is “an open, fair, censorship-resistant global marketplace” that’s better than anything inside of the New York Stock Exchange or any other means of settling trades. It’s certainly a much bigger opportunity than he imagined, backed at that cafe. As he said yesterday: “Everything that we do to make this thing faster and faster results in this better censorship resistance, and therefore better markets. And price discovery is what I imagine is the killer use case for decentralized public networks. Can we be the world’s price discovery engine? That’s an interesting question to ask.”

Pointing to the wild swings in cryptocurrency prices right now, he says he suspects that “part of that is just developers and folks discovering the network and building cool applications on it.” It’s exciting when people can “self serve and build stuff that they want to go to market,” he adds. “It’s the secret weapon of decentralized networks versus any incumbents like Bank of America or Visa or whatever. Those big companies can’t iterate and move as fast as global set of engineers who can just come together and code whenever they want to.”

He saw the same dynamics play at Qualcomm. “Working in a big company, it seems like there’s a ton of resources, right? They can accomplish anything. But you saw us working on proprietary operating systems while the Linux guys were just working first for fun, right? And it seemed like it was just a weird hobby that people had; they were coding operating systems at night; they were coding over the weekend. Then all of a sudden, Linux is the de facto mobile iOS for Android.”

If you’re curious to learn more about Solana, we’ll have a podcast coming out soon with our longer conversation with Yakovenko. In the meantime, the outlet Decrypt today published an explainer titled “What is Solana?” that you might check out here.