Bitcoin (BTC) plummeted to an intraday low near $42,000 today, dropping 35% from its all-time high at $64,849.27. Over the weekend the selling intensified as news that Tesla may have sold its Bitcoin holdings made waves, and even after this was proven to be untrue, Bitcoin’s market dominance had still been pulled down to a three-year low below 40%.

While this decline in Bitcoin may have scared new investors, stock-to-flow creator PlanB said the performance of the current bull phase is still better than the 2017 bull run. PlanB also warned investors to expect several 30% dips during Bitcoin’s climb to a new all-time high.

Although the long-term story remains intact, the sharp bearish moves in Bitcoin on every minor negative news tidbit suggest nervousness among investors. The lack of a sharp recovery even after Elon Musk’s clarification that “Tesla has not sold any Bitcoin” suggests investors are not buying aggressively on positive news.

Will Bitcoin’s weakness stall the altcoin season or is Bitcoin getting ready for a sharp relief rally? Let’s analyze the charts of the top-10 cryptocurrencies to find out.

Bitcoin broke below the neckline of the head and shoulders pattern on May 16 but the bears could not achieve a close below it. By the end of the day, the price rebounded and closed above the neckline. 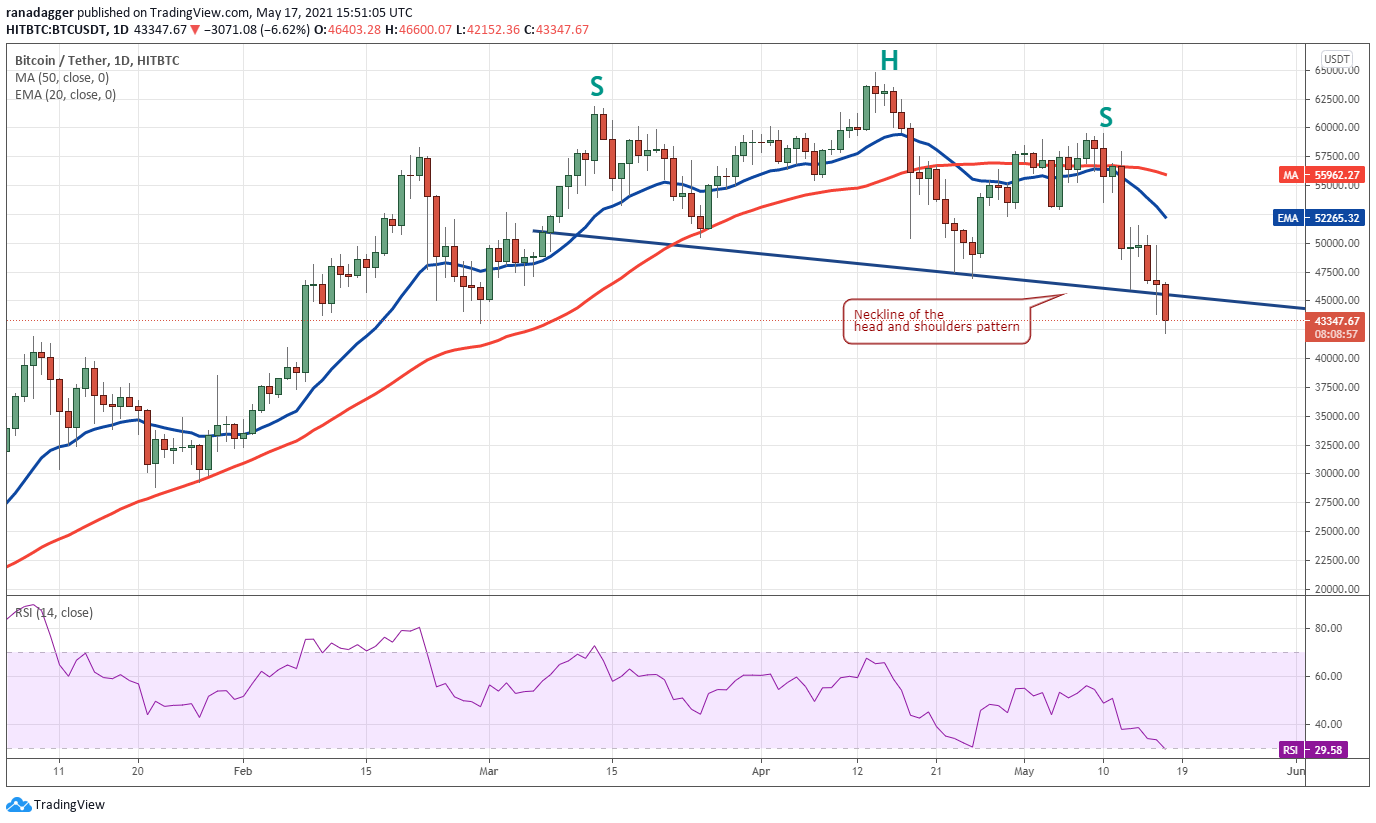 If the bulls do not push the price back above the neckline quickly, the selling is likely to intensify further. The pair could then start its decline toward the pattern target at $31,653.73.

The downsloping 20-day exponential moving average ($52,265) and the relative strength index (RSI) in the oversold territory indicate the bears have the upper hand.

Any pullback is likely to face stiff resistance at the 20-day EMA. This negative view will invalidate if the bulls push the price above the stiff overhead resistance at $60,000.

Ether (ETH) is correcting the sharp uptrend of the past few days. The price dipped below the 20-day EMA ($3,431) today but the bulls are trying to arrest the decline near the 38.2% Fibonacci retracement level at $3,195.98. 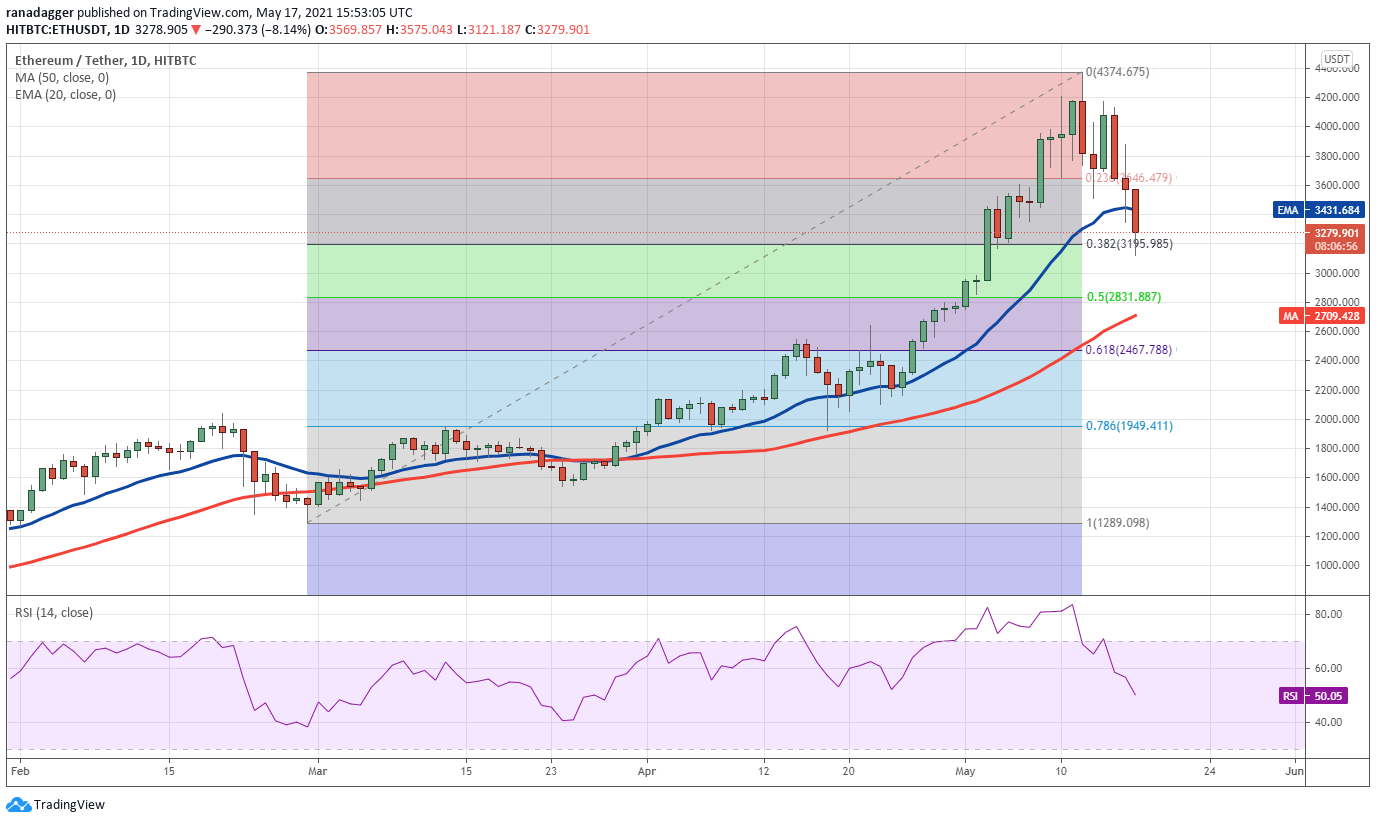 If the price rebounds off the current level and rises above $3,600, the bulls will try to push the price to $4,200. However, the 20-day EMA has flattened out and the RSI has dropped near the midpoint, suggesting the bullish momentum may be weakening.

If the buyers fail to defend the $3,195.98 support, the decline could extend to the next support at the 50-day simple moving average ($2,709). Such a deep fall is likely to delay the start of the next leg of the uptrend. 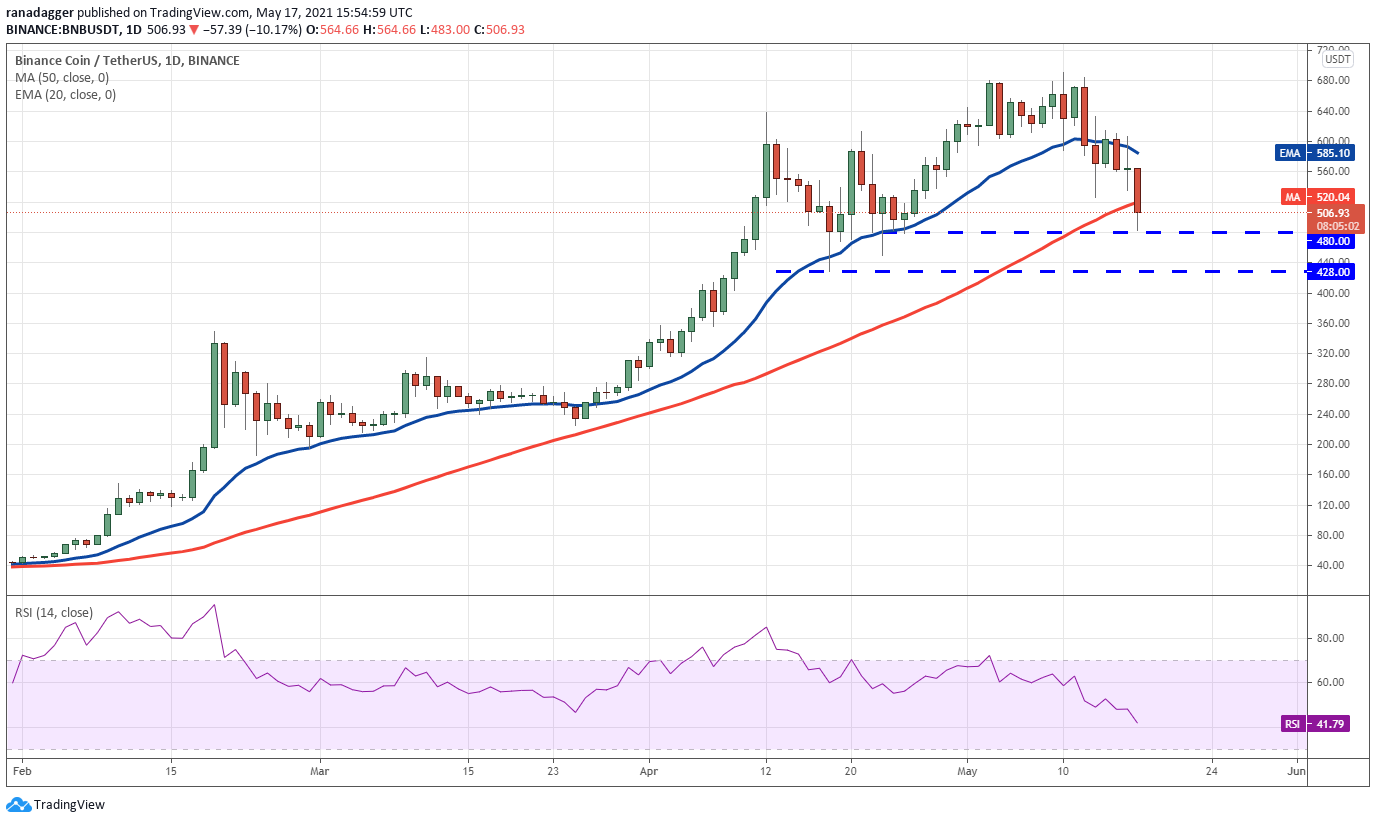 If the current recovery turns down from the 20-day EMA, it will suggest that traders are closing their positions on rallies. That will increase the possibility of a break below $480. If that happens, the BNB/USDT pair may drop to $428 and then to $348.70. 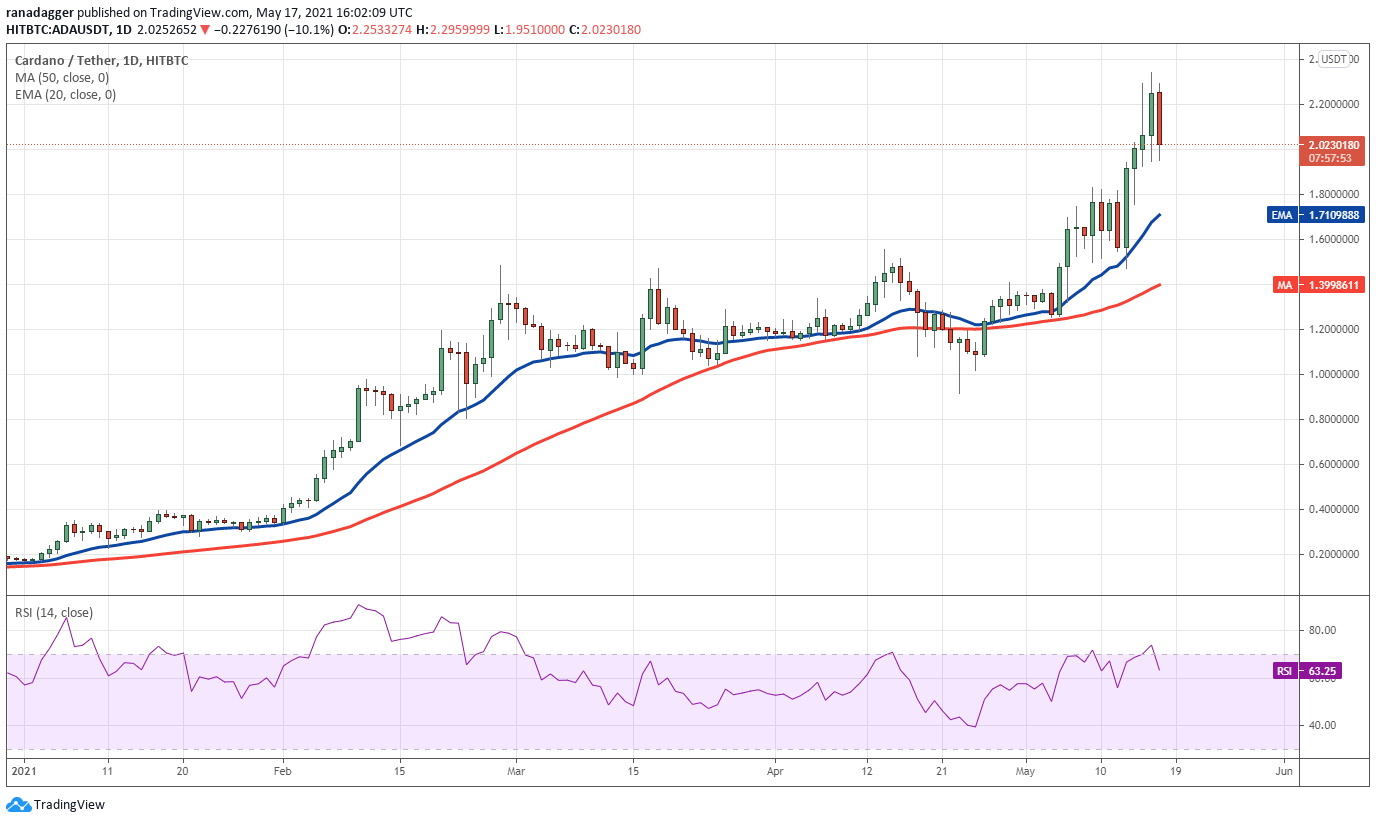 A strong rebound off the 20-day EMA will suggest the sentiment remains bullish and traders are buying on dips. On the contrary, a break below the 20-day EMA will indicate that supply exceeds demand and that may pull the price down to the 50-day SMA ($1.39).

Instead, if the price turns up from the current level and rises above $2.34, the ADA/USDT pair may resume its uptrend. The next target objective on the upside is $2.82 and then $3. The rising moving averages and the RSI above 63 indicate the path of least resistance is to the upside.

The bulls are currently attempting to defend the 20-day EMA ($0.46). If they succeed, Dogecoin (DOGE) could move up to $0.59 where the bulls are likely to encounter stiff resistance from the bears. 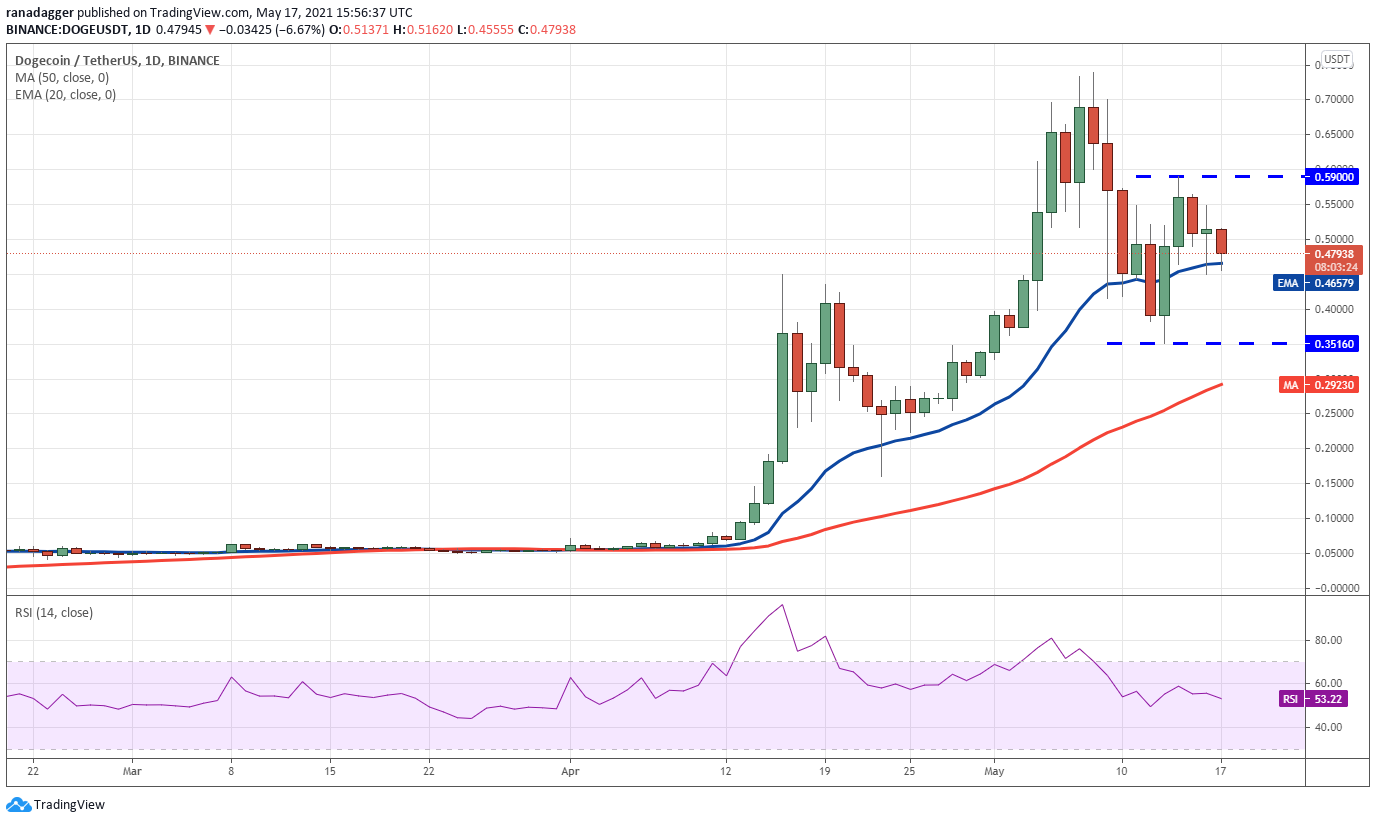 If the price turns down from $0.59, the possibility of a break below the 20-day EMA increases. If that happens, the DOGE/USDT pair could drop to the critical support at $0.35. A strong rebound off this support could keep the pair range-bound between $0.35 and $0.59 for a few days.

Contrary to this assumption, if the bulls drive the price above $0.59, the pair may retest the all-time high at $0.73. A breakout of this resistance could start the next leg of the uptrend that may reach $0.83 and then $1.

The bulls purchased the dip to the support line of the symmetrical triangle today, indicating buying at lower levels. The buyers will now try to propel XRP above the resistance line of the triangle. 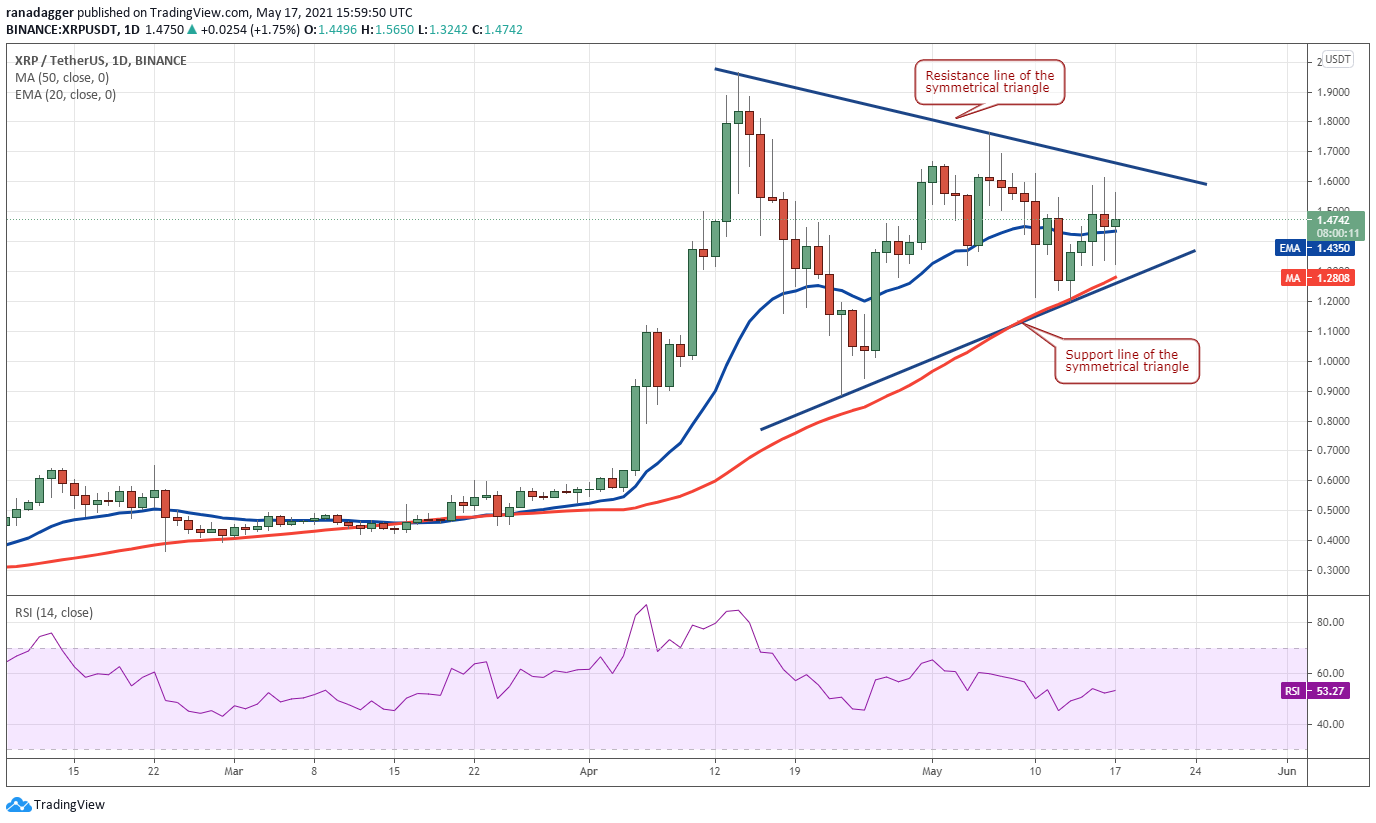 If they succeed, the XRP/USDT pair could pick up momentum and rally to the 52-week high at $1.96.This level may act as stiff resistance but if the bulls can overcome it, the pair may rally to $2.68.

The flat 20-day EMA ($1.43) and the RSI above 53 do not signal a clear advantage to the bulls. If the price turns down from the resistance line of the triangle, the pair may extend its stay inside the triangle for a few more days.

The trend will turn in favor of the bears if the price breaks below the triangle. That could result in a decline to $0.88.

Polkadot (DOT) broke out of the $44 overhead resistance on May 14 but the bulls could not sustain the higher levels. The bears pulled the price back below the breakout level at $44 on May 15. 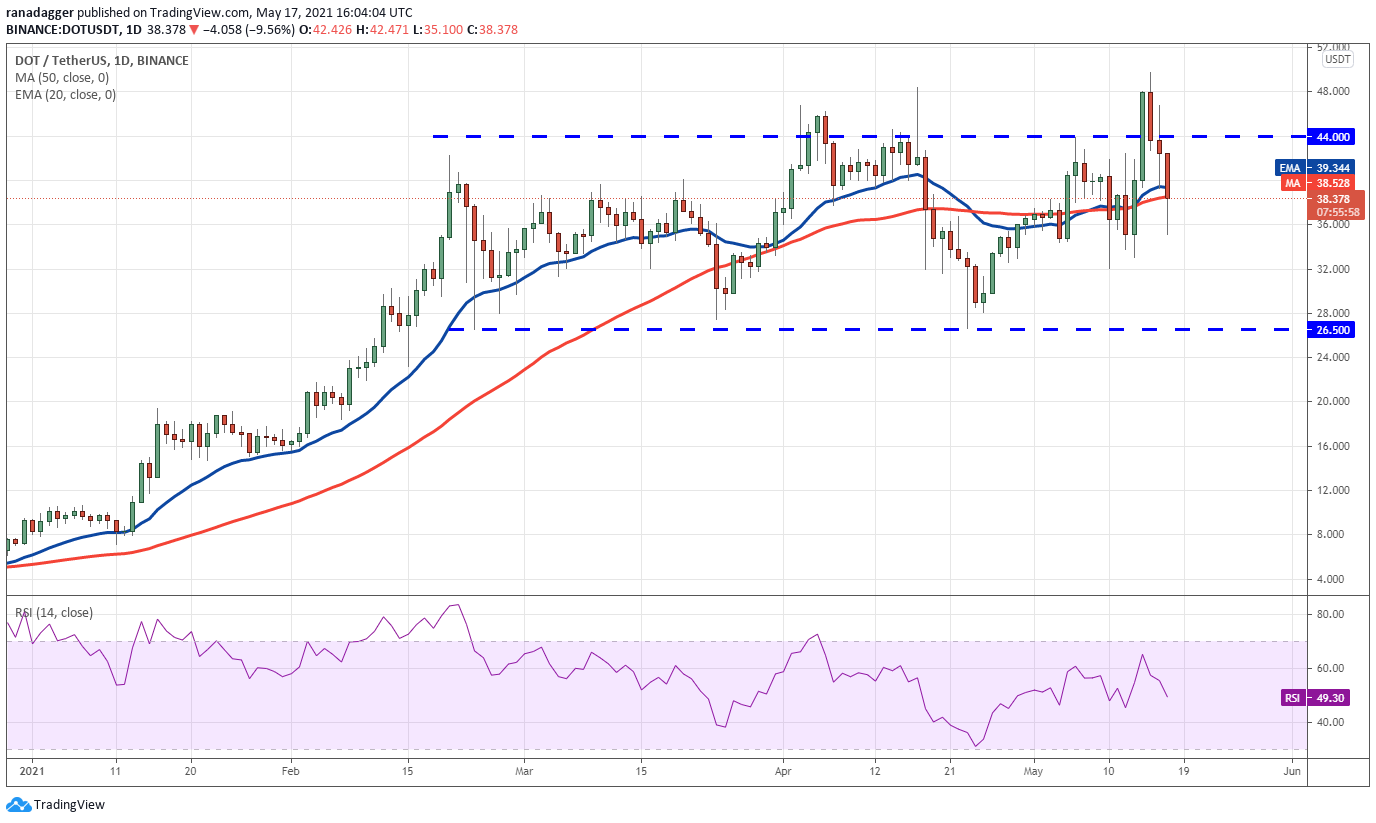 The 20-day EMA ($39.34) is flattening out and the RSI is near the midpoint, suggesting the range-bound action may continue for a few more days.

A break below $32.50 could open the gates for a decline to the critical support at $26.50. A bounce off this support will suggest accumulation at lower levels.

On the other hand, if the price rises from the current level and breaks above $44, it will suggest that sentiment remains positive and the bulls continue to buy at lower levels. That will increase the possibility of a retest of the all-time high at $49.78.

Bitcoin Cash (BCH) broke and closed below the 20-day EMA ($1,178) on May 15. The bulls attempted to push the price back above the 20-day EMA on May 16 but failed to sustain the higher levels. This led to further selling today and the price dipped to the psychological level at $1,000. 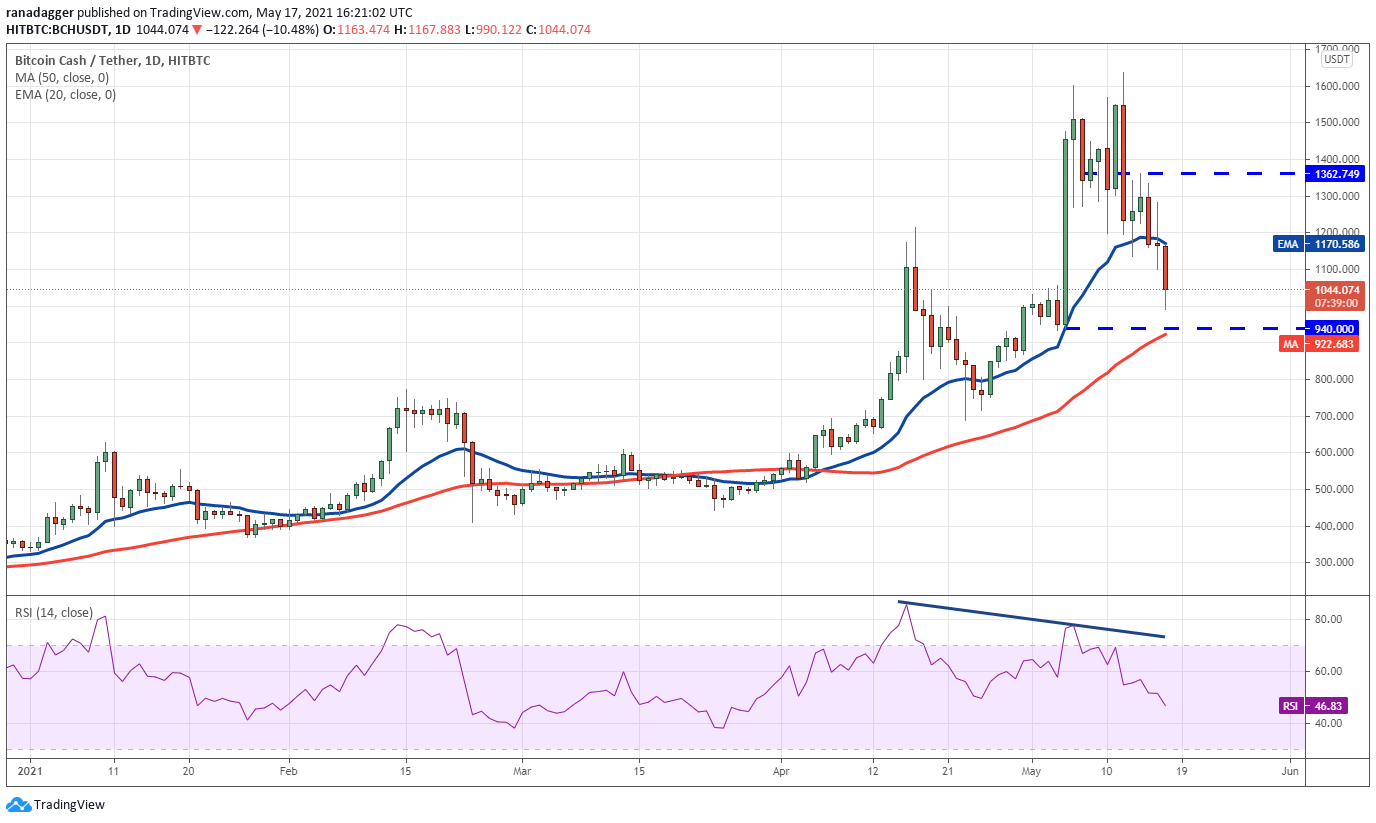 If the price turns down from this level, the BCH/USDT pair may remain range-bound for a few days.

This neutral view will invalidate if the pair continues lower and breaks below the 50-day SMA ($922). Such a move could open the doors for a further decline to $700. The trend may favor the bulls on a break and close above $1,362.74.

The failure of the bulls to build upon the breakout of the ascending broadening wedge formation could have attracted aggressive profit-booking from short-term traders. This pulled Litecoin (LTC) to the 20-day EMA ($308) on May 12. 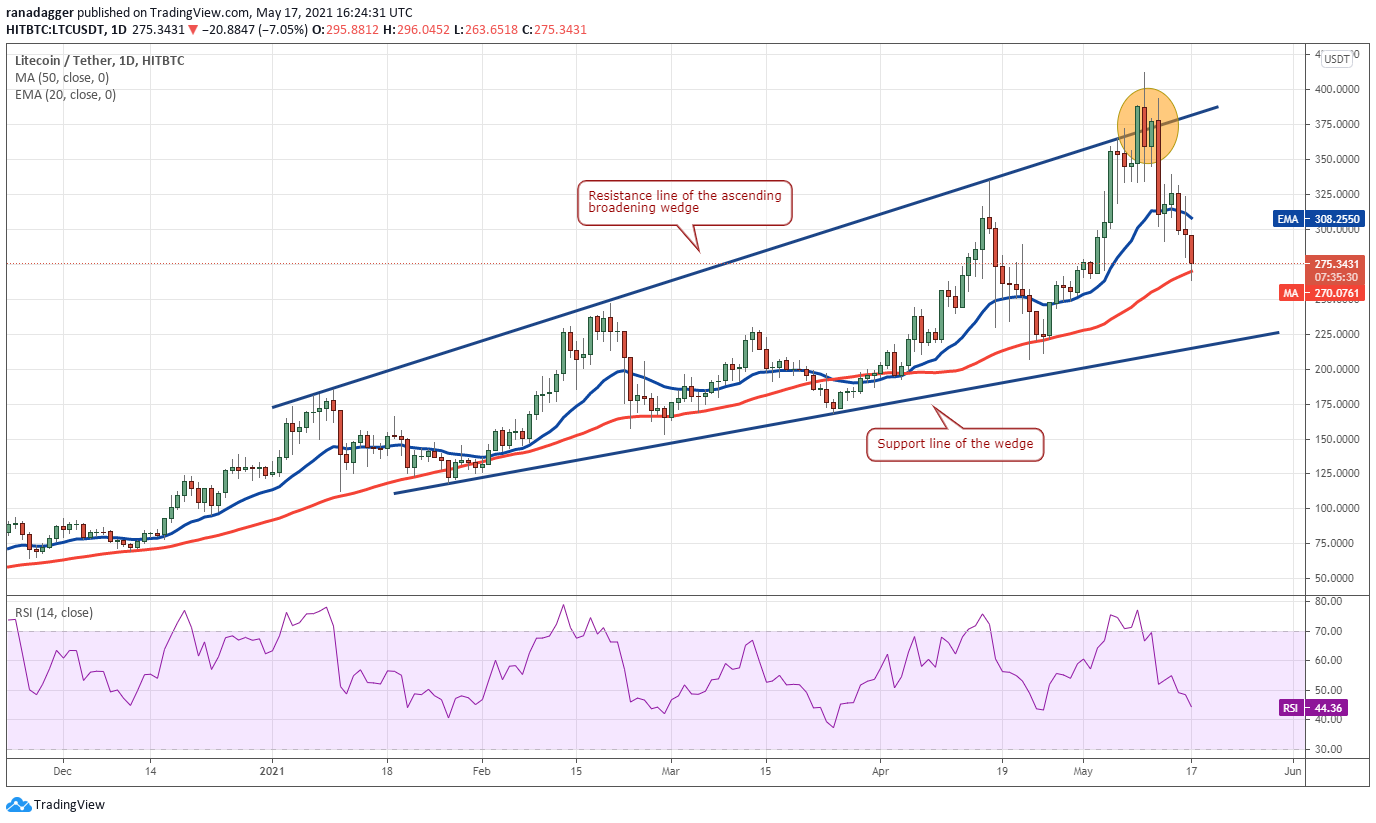 Although the bulls attempted a recovery on May 13 and 14, the rebound fizzled out at $339.10. The selling resumed on May 15 and sent the LTC/USDT pair below the 20-day EMA.

Today, the bulls are attempting to defend the 50-day SMA ($270). However, the 20-day EMA has started to slope down and the RSI is below 45, suggesting the bears are trying to make a comeback.

If the pair breaks below the 50-day SMA, the selling could intensify and the pair may drop to the support line of the wedge. This negative view will be negated if the bulls push the price above $340.

Uniswap (UNI) broke below the support line of the ascending channel today but the bears could not capitalize on this weakness. The bulls are currently attempting to push the price back into the channel. 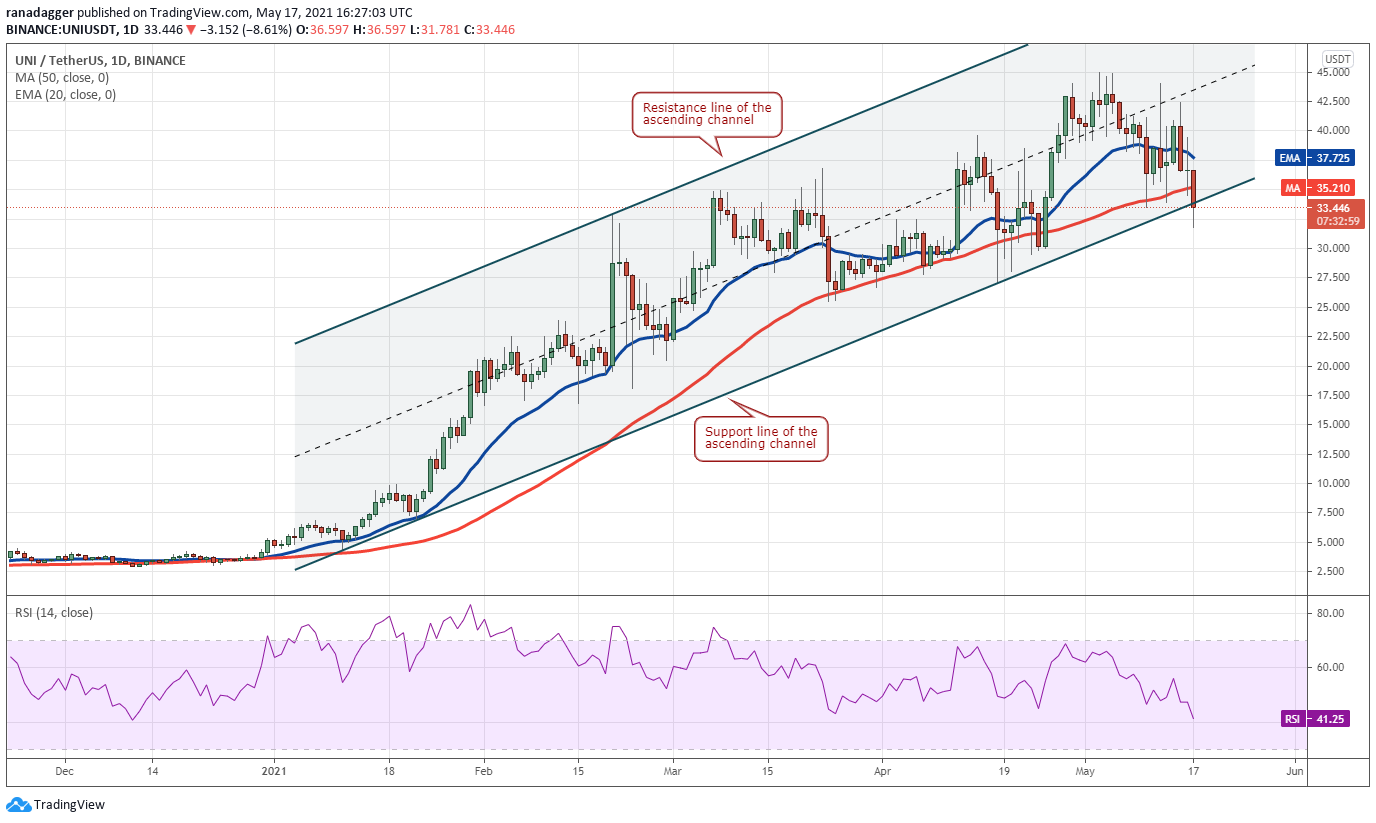 However, the 20-day EMA ($37.72) has started to turn down and the RSI has dipped into the negative territory, suggesting the bears have a slight advantage. If the price closes below the channel, it will indicate a possible change in trend.

The UNI/USDT pair could then drop to the $27.50 to $25 support zone and then to $20. This negative view will invalidate if the buyers propel the price above $40.