Despite the ongoing sideways trend in the cryptocurrency markets, Bitcoin (BTC) still remains a crowded trade. According to a new survey from Bank of America, this could indicate that the current bull cycle’s market top is still to come.

Bank of America’s most recent fund manager poll suggests that the “long Bitcoin” bet is now the most crowded trade across all markets, with nearly 45% of respondents indicating it ahead of other trades like “long tech,” Bloomberg reported Tuesday. The new BofA survey captured responses from 194 fund managers with $592 billion worth of assets under management. 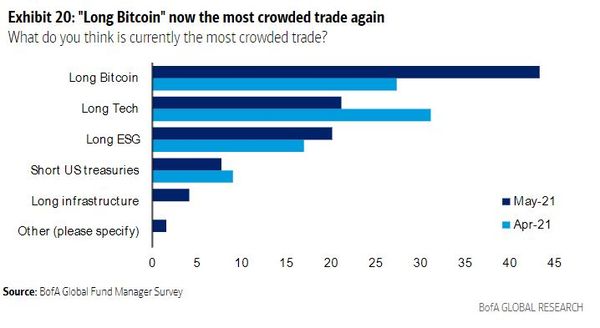 In the survey remarks, BofA notes that trades identified as crowded have historically heralded an incoming top for their respective markets. Indeed, Bitcoin was trading just around $36,000 when BofA’s survey identified long Bitcoin as the most crowded trade in January. Bitcoin’s price subsequently surged to break new all-time highs above $50,000 in February, eventually rising above $64,000 in mid-April.

Long Bitcoin was also chosen as the most crowded trade in Bank of America Merrill Lynch’s global fund manager survey back in September 2017. At the time, Bitcoin traded at around $4,000 before breaking $20,000 in December 2017 for the first time in history.

The latest BofA survey may add some optimism to cryptocurrency markets, which are currently experiencing mixed signals after a major market pullback. The ecosystem shed hundreds of billions of dollars after Tesla CEO Elon Musk announced the suspension of BTC payments for car purchases due to environmental concerns. He also hinted at dumping BTC from Tesla’s balance sheet in the second quarter of 2021. However, some crypto players like CoinShares chief strategy officer Meltem Demirors believe that the latest BTC price action should be attributed to other reasons, such as tax-day selling.

In another survey in mid-April, BofA reported that 75% of professional investors see Bitcoin as a bubble. Some crypto activists suggested on Twitter that the majority of BofA fund managers do not trade Bitcoin.

The BofA survey of fund managers, 99% of whom can’t trade bitcoin, think “long bitcoin” is the most crowded trade. The last time they did so was in January. It doubled 3 months later.