This Dam Acts Like a Water Cannon. Let’s Do Some Physics!

When people build dams—giant walls that hold back entire lakes and rivers—they have to build an overflow channel called a spillway, a mitigation against flooding.

A spillway could be something as simple as a path for water to flow over the top of the dam, or more complicated, like a side channel. Sometimes, there is just a big hole at the bottom of the dam (on the dry side) so that water can just shoot out like a massive water cannon. This is how it works at the Funil Hydropower Plant in Brazil. There’s a nice video showing the water coming out—it looks like a river in the air, because it basically is a river in the air.

There’s actually a name for the relationship between water flow and depth—it’s called Torricelli’s law. Imagine you have a bucket full of water and you poke a hole in the side near the bottom. We can use physics to find the speed of the water as it flows out.

Let’s start by considering the change in water level during a very short time interval as the water drains. Here is a diagram: 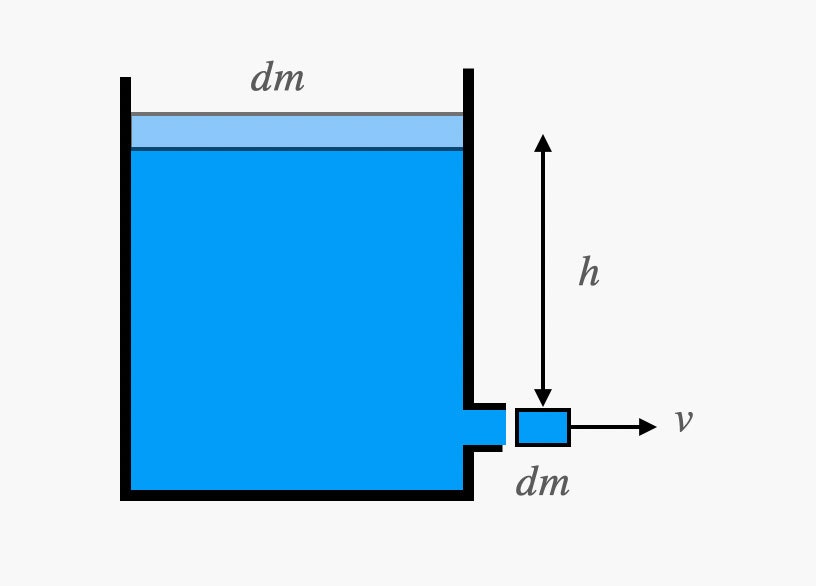 Looking at the top of the bucket, the water level drops—even if just a little bit. It doesn’t really matter how much the water level decreases; what we’re interested in is the mass of this water, which I label as dm. In physics, we use “d” to represent a differential amount of stuff, so this could just be a tiny amount of water. This decrease in water level at the top means that the water has to go somewhere. In this case, it’s leaving through the hole. The mass of the exiting water must also be dm. (You have to keep track of all the water.)

Now let’s think of this from an energy perspective. The water is a closed system, so the total energy must be constant. There are two kinds of energy to think about in this case. First, there is gravitational potential energy (Ug = mgy). This is the energy associated with the height of an object above the surface of the Earth, and it depends on the height, the mass, and the gravitational field (g = 9.8 N/kg). The second type of energy is kinetic energy (K = (1/2)mv2). This is an energy that depends on the mass and the speed (v) of an object.