If you pay an emotional labor fee, Postdates will get your stuff from your ex

Yesterday, the team behind the parody Amazon Dating delivered us Postdates. It’s like Postmates, but for getting your stuff back from your ex.

Postdates looks like the actual Postmates website – you can select a type of relationship (“casually dated,” “lived together,” “one night stand,” etc.) like it’s a type of restaurant. Then, you can choose from preset items to retrieve (concert tickets if you were friendzoned, family heirlooms if you were divorced) or add a custom item. Delivery starts at $25 in LA and $30 in NY, along with an additional emotional labor fee of $3.99. Yes, you can actually use this service if you’re in one of these two cities, but Postdates isn’t here to stay — it’s a pop-up business. Or, as Postdates “founder” Ani Acopian puts it, “It’s kind of like watching a ‘Black Mirror’ episode, but it’s your real life.”

You might remember Elon Musk’s failed comedy start-up/”intergalactic media empire” Thud, which aimed to create immersive digital experiences that blurred the lines between what’s real and fake. Or, you might not remember Thud, since it failed spectacularly and wasn’t very funny. Postdates struck the satire gold that Elon Musk dreamed of with Thud, only they did it without $2 million dollars in funding from one of the richest men in the world.

TechCrunch talked to conceptual artist Ani Acopian, producer Suzy Shinn, and product developer Brian Wagner to get the low-down on just how legit Postdates is. 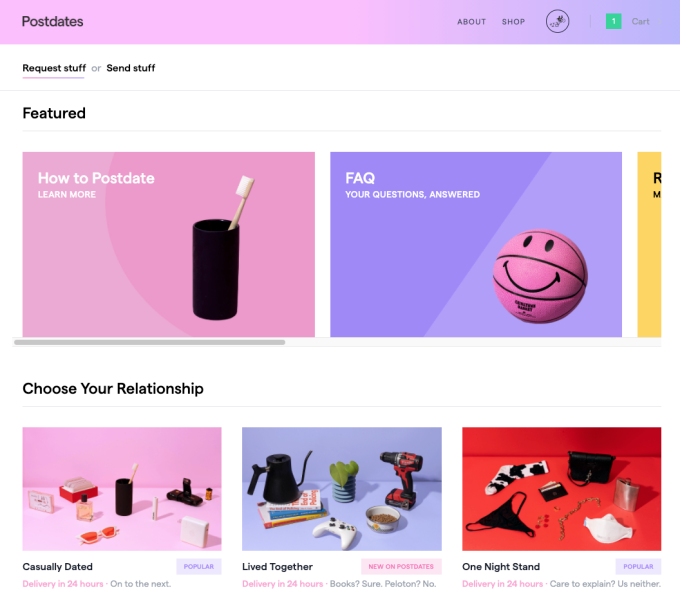 TechCrunch: Why Postdates? How did the idea come about?

Ani Acopian: I think we had this creative juice inside of us that we wanted to find an outlet for.

SS: Then, we had the Postdates idea, and we actually tried to get investors and artists to fund it, because we were like… This is going to cost something, we want to make it real and actually function. No one wanted anything to do with it, because they were like, “What’s the return?”

SS: No one wanted anything to do with us funding-wise, so we built it ourselves.

TC: So, you can actually use this?

AA: Yeah, we partnered with two local courier companies, Gourmet Runner in LA and Airpals in New York. We wanted to make sure we work with people that treat their workers right.

SS: You can put in a request, and the ex has to consent obviously and be like, “Yeah, I have this stuff for you, I’ll put it outside,” and our couriers have Postdates bags that we give to them. But legitimately, you can use it in both of those cities as long as you’re not sending a cat, or a child, or alcohol, or drugs, or something that won’t fit in a bag.

AA: We spent a lot of time on the workflow to make sure no addresses are shared, that everyone’s consenting to be involved, and we’re trying to keep it no-contact, so we’re asking people to put stuff on their door handle. You’re not charged until your ex accepts the order. 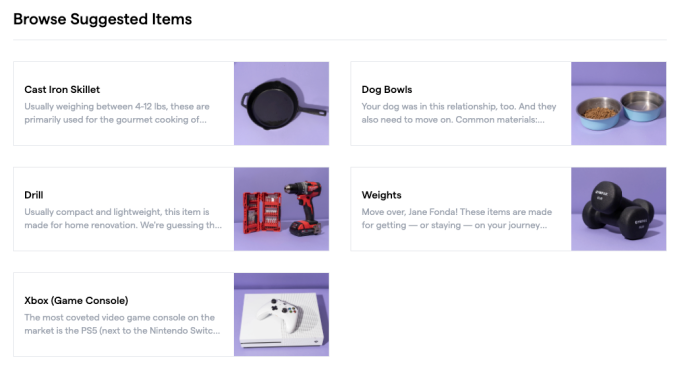 TC: You just launched yesterday, but have people actually been using the service so far?

Brian Wagner: We had some people who would post a screenshot in response to Ani’s tweet and be like, “Oh snap, I actually got Postdated by my ex!”

SS: There’s about 30 to 40 pending requests, and we’ve gotten a handful that just like, as of this morning, have been delivered successfully.

TC: Do you think this could be a viable business?

AA: Not everything needs to be a viable business. I would actually be… not surprised, but upset if this actually became a thing, because I don’t think the world needs that level of stuff, but I think we’re pretty much already there. All you can do is hold the mirror up. 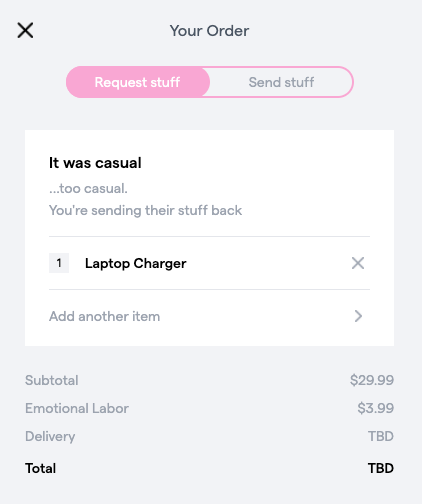 TC: As satire, what are you trying to say with Postdates?

SS: I think in the tech world, it seems like all of these tech startups get crazy amounts of funding, and they spend so much money, and they take themselves so seriously. The three of us, with the help of our friends, were able to do this, and we didn’t need $13 million in funding or five years. But we were staying up until like 5 AM, and we were like, “Can we hire someone to help us?” but we were like, “No, we can’t pay.”

BW: Especially with the rise of the gig economy, we’ve seen some positives and some pretty serious negatives, especially during quarantine. It helps people get the things that they need, but also a lot of workers aren’t being paid fairly and don’t have health insurance. So there’s a sentiment a lot more often now that a lot of tech is redistributing labor, and you’re just paying for people to be moved around. So in a way, we’re sort of like… We’ve redistributed emotional labor here.

TC: There’s an emotional labor tax on the site, yeah.

BW: There’s a bit of poking fun of that, saying how far will we go in terms of actually moving labor along for money. Will people pay for someone else to deal with the emotional handling of a situation?

TC: How did Postdates build upon Amazon Dating?

AA: We’ve made two parody sites now, and we wanted to take that to the next level and make it experiential. It’s kind of like watching a Black Mirror episode, but it’s your real life.

SS: What is the literal price you will pay not to see someone? This is a real thing that happens all the time – my friends will be like, “I broke up with my girlfriend, I need you to go get my stuff,” and I’m like, “I don’t want to go get your stuff.”

AA: I don’t think we should outsource it, though.

TC: So you don’t think we should outsource it, but also, you made Postdates.

AA: I think that’s the whole…

TC: What does it say about startup culture to make a product that you don’t think should exist?

SS: Startups are so, so serious, there’s no humor in it, and they think it’s going to last forever. Well, we’re doing the opposite.  We’re going to make this last a couple of weeks for a limited time only, and then we’re gonna take it away. But we would love to keep doing these, making something where art meets tech meets entertainment.