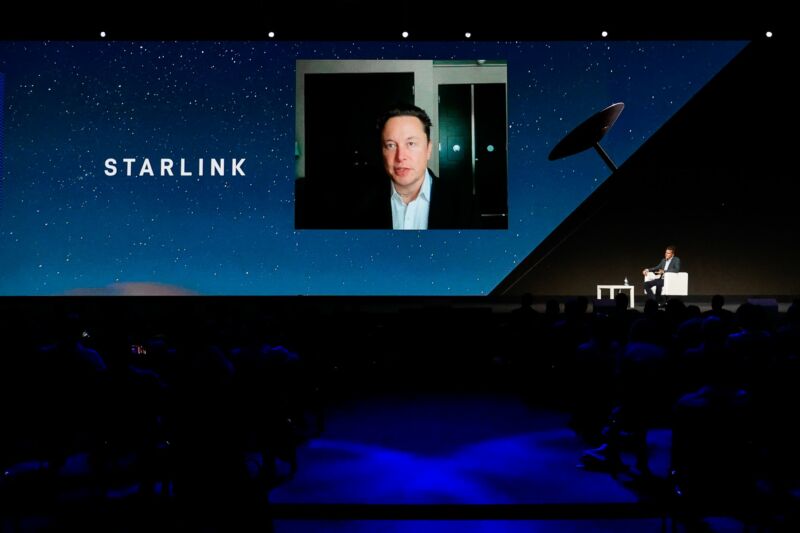 SpaceX CEO Elon Musk said his company’s Starlink division is trying to cut the price of its user terminal from $500 to as low as $250. Starlink has been charging $99 a month for Internet service during its beta phase, plus $500 up front for the user terminal/satellite dish, and it’s losing money on the sale of each dish.

“We are losing money on that terminal right now. That terminal costs us more than $1,000,” Musk said yesterday during a Mobile World Congress Q&A session (see a YouTube video posted by CNET). “We obviously are subsidizing the cost of the terminal. We are working on next-generation terminals that provide the same level of capability, roughly the same level of capability, but cost a lot less.”

Musk noted that “selling terminals for half price is not super compelling” given that SpaceX is planning for millions of Starlink customers. “Over time, we’d like to reduce the terminal cost from $500 to, I don’t know, $300 or $250, or something like that.”

Musk did not provide any specific timeline for lowering the terminal price. Hopefully, the next terminal will be more tolerant of heat. As we recently reported, the current Starlink dishes go into “thermal shutdown” once they hit 122° Fahrenheit, a limit that caused one Arizona customer to lose Internet service for seven hours and has caused shorter outages for other people.

Musk rehashed some Starlink plans that were already made public, such as the company’s expectation that it will push latency below 20 ms. He also gave an update on the current number of users and the number of users expected within the next year. “We recently passed the strategically notable number of 69,420 active users,” Musk said. “We are on our way to having a few hundred thousand users, possibly over 500,000 users, within 12 months.”

Starlink could eventually have a few million home-Internet customers in the US. It has a pending application asking the Federal Communications Commission to let it deploy up to 5 million user terminals in the US, up from its current authorization of 1 million terminals.

Starlink is “operational now in about 12 countries, and more [are] being added every month,” Musk said. So far, Starlink has over 1,500 low-Earth-orbit satellites providing data service capable of a combined 30Tbps, he said. “Starting in August, we should have global connectivity everywhere except the poles,” Musk said.

said that, while Starlink should be able to provide service to all 500,000 people who ordered it, getting to several million users will be “more of a challenge.” Musk didn’t say yesterday when Starlink will exit beta, though SpaceX has said it will deliver on preorders starting in the second half of 2021.