The Ethereum network witnessed the deployment of its London upgrade on the Ropsten testnet on June 24. This upgrade consists of the highly anticipated Ethereum Improvement Proposal (EIP) 1559.

Following the launch on the Ropsten testnet, the London upgrade will be deployed on Ethereum’s Goerli, Rinkeby and Kovan testnets at weekly intervals. This is one of the important steps in the roadmap to implement a proof-of-stake (PoS) consensus on the Ethereum network, also known as Ethereum 2.0.

The London upgrade brings five EIPs that are going to be deployed on the testnets — EIP-1559, EIP-3198, EIP-3529, EIP-3541 and EIP-3554. The hotly debated EIP-1559 proposal is a transaction pricing mechanism that consists of a fixed per-block network fee that is burned and allows the dynamic expansion and contraction of block sizes to address the congestion issue.

Through this mechanism, there will be a discrete base fee for transactions that will be included in the next block. For applications and users who want to prioritize their transactions on the network, a tip called “priority fee” can be added to incentivize the miner for faster inclusion. While the miner pockets this tip, the base fee for the transaction is burned. This entails that until the transition to a PoS model is complete, in addition to the 2 Ether (ETH) per block that miners receive, they would also be receiving the tip for prioritizing transactions.

James Beck, director of communications and content at ConsenSys — a blockchain technology company backing Ethereum’s infrastructure — discussed with Cointelegraph the impact of burning the base fees on the network:

However, Marie Tatibouet, chief marketing officer of cryptocurrency exchange Gate.io, spoke to Cointelegraph about the possibility of this change to the transaction fees having an adverse effect on the network.

She noted that one can still tip miners and that the larger the tip, the faster the transaction will be processed, adding, “Now, as the network gets bigger and with Ethereum continuing to be the primary smart contract platform, will that not trigger another ‘fees war’ among the users who are willing to pay extra to speed up their transactions?”

Another crucial part of this upgrade that impacts day-to-day users is the EIP-3554. This EIP delays the “difficulty bomb” to come into effect from the first week of December 2021. In essence, the difficulty bomb going off would mean that mining a new block would become extremely unfeasible and hard for a miner, thus enforcing the transition to the PoS Beacon Chain.

Kosala Hemachandra, founder and CEO of MyEtherWallet — an Ethereum-based wallet platform — told Cointelegraph the EIP has been there since the inception of Ethereum in order to ensure that the network moves to a PoS and Eth2 on time. He further added:

“This value is responsible for making the block difficulty exponentially hard after a certain block number, thus making it impossible for miners to mine new blocks, and they have to move to Eth2 network. However, because of development delays, this time bomb kept getting delayed, and in the London fork, it’ll be postponed one last time.”

The official document for this EIP states that the network is “targeting for the Shanghai upgrade and/or the Merge to occur before December 2021.” However, it also goes on to add that the bomb can be readjusted at that time or be removed altogether, indicating that the first week of December is not a hard deadline for this bomb or the merge to finally occur and that it could be delayed even further from this point on.

Tatibouet also mentioned that until Ethereum 1.0 merges with the PoS Beacon Chain — a mechanism to coordinate shards and stakers on the network — transaction speed solutions built on top of the existing network, or layer-two solutions, seem to be the most viable option.

She went on to add, “Layer-one and layer-two solutions need not be exclusive from each other. This is the reason why Ethereum 2.0 is using a combination of layer-one (sharding, PoS) and layer-two (rollups) to achieve true scalability.”

Related: A London tour guide: What the EIP-1559 hard fork promises for Ethereum

Coincidentally, according to data from CryptoQuant, on the same day as the deployment of the upgrade on the Ropsten testnet, over 100,000 ETH was staked into the Eth2 deposit contract, which amounts to $210 million in notional value at the current ETH value of around $2,000. Such a high level of interest could be highly indicative of the anticipation that the Ethereum community has for this upgrade, especially due to the implications of the much-discussed EIP-1559.

Hemachandra also mentioned how this proposal supported layer-two solutions. He added, “EIP-1559 introduced dynamic block gas limit. In essence, now the number of transactions that can be included in a block can dynamically adjust based on the congestion.” He added further, “Therefore, it can reduce the congestion — this is another great solution on top of L2.”

Staking and aftermath of the “merge”

It’s important to note that after the additional 100,000 ETH was staked on the day of the deployment of the London upgrade on the testnet, the total proportion of ETH staked on the Beacon Chain surpassed 5% for the first time. The number of ETH staked currently stands at just over 6 million tokens with a value of $12.76 billion.

When compared to other PoS networks and coins, 5% of ETH staked isn’t a high proportion. For example, Cardano currently has nearly 72% of ADA staked on the network. However, there are a variety of reasons why this is the case. Hemachandra explained the core reason and why this is a positive indication for the network:

“Unlike most other PoS coins, the whole purpose of ETH is not just staking and earning interest. This is a good sign for ETH being used as a utility. For example, if 80% of ETH is staked, then there is only 20% of ETH left to do anything in Ethereum, and I don’t think this is an ideal scenario.”

According to data from Anthony Sassano, co-founder of EthHub.io, 23% of all ETH mined is deposited in smart contracts. This proportion amounts to over 23.45 million ETH tokens valued almost at $50 billion. Out of the 23.45 million, over 6 million ETH is staked in the Eth2 deposit contract and 9 million ETH in various decentralized finance (DeFi) protocols, as the network is the one most widely used for DeFi.

The remaining ETH in smart contracts is split among various stakeholders such as Gemini, Gnosis Safe multi-sig wallet, Polygon Bridge and Vitalik Buterin’s cold wallet among others. 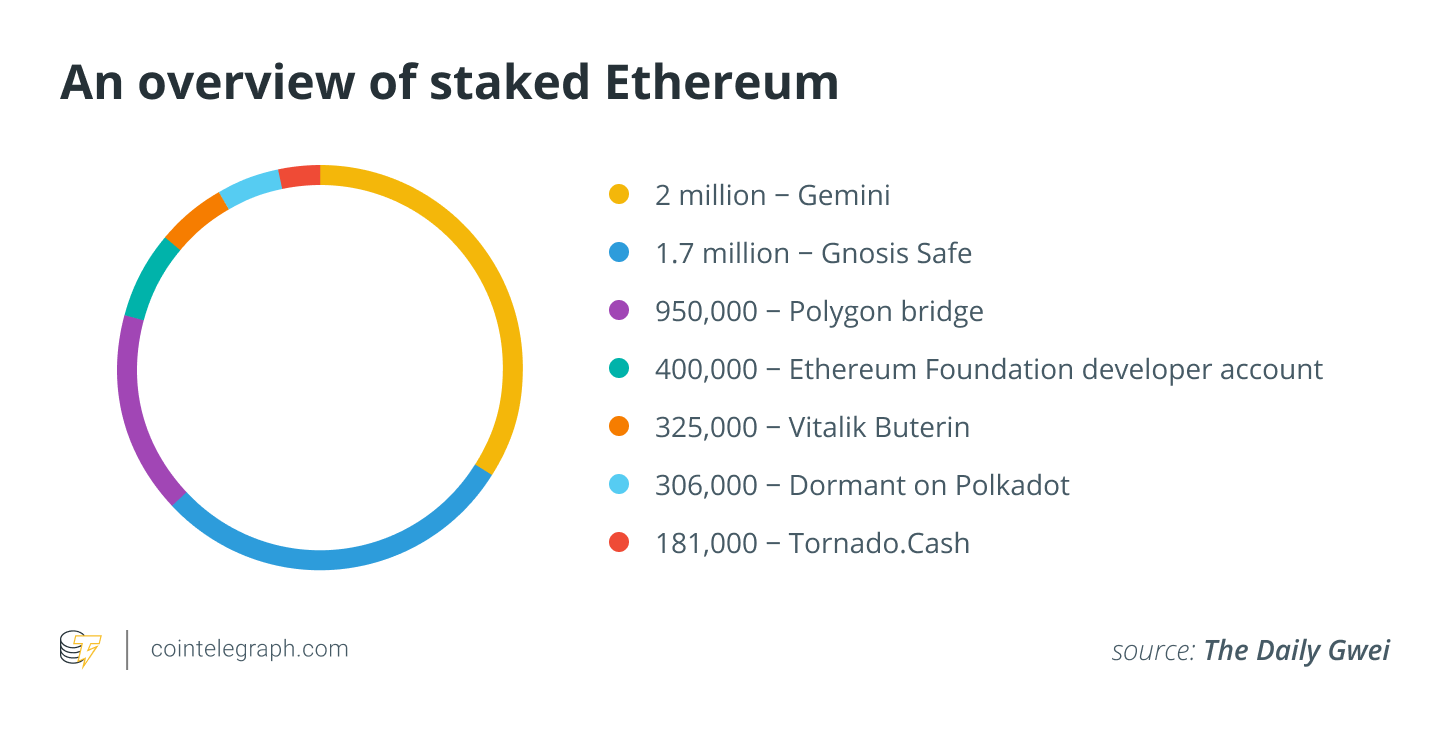 In the aftermath of “the merge,” which will combine both Ethereum 1.0 and Ethereum 2.0, marking the end of Ethereum’s proof-of-work consensus mechanism, ETH miners will be faced with a tough choice.

As their mining hardware becomes obsolete, they must either sell their rigs and move to staking ETH or — at least for miners using GPUs — move to other altcoins.

An analysis by Justin Drake of the Ethereum Foundation estimates there will be 1,000 ETH issued every day, and 6,000 ETH will be burned to make ETH a more deflationary asset.

His analysis further found that assuming the increase of validators and a staking annual percentage rate of 6.7%, the annual supply change would amount to a negative 1.6 million ETH, thus decreasing the annual supply rate by 1.4%.

This transition would make ETH a deflationary asset, with the supply rate shrinking as time passes on, putting upward pressure on the supply-demand dynamic that would dictate its price in the market.