Bitcoin (BTC) bulls have successfully defended the $30,000 level in the past few days but the failure to achieve a strong rebound has some traders worried that the price will eventually dip to new lows.

In a series of tweets, Ecoinometrics said that the current correction “looks very similar to 2013” when Bitcoin took 197 days to rise to a new all-time high and a bottom formed after a 69% correction from the all-time high.

If history repeats itself, then traders may need to be patient because the current correction has only been in play for 95 days. At $30,000, Bitcoin has just dropped 54% from its all-time high, and a 69% correction could sink it down to $20,000. 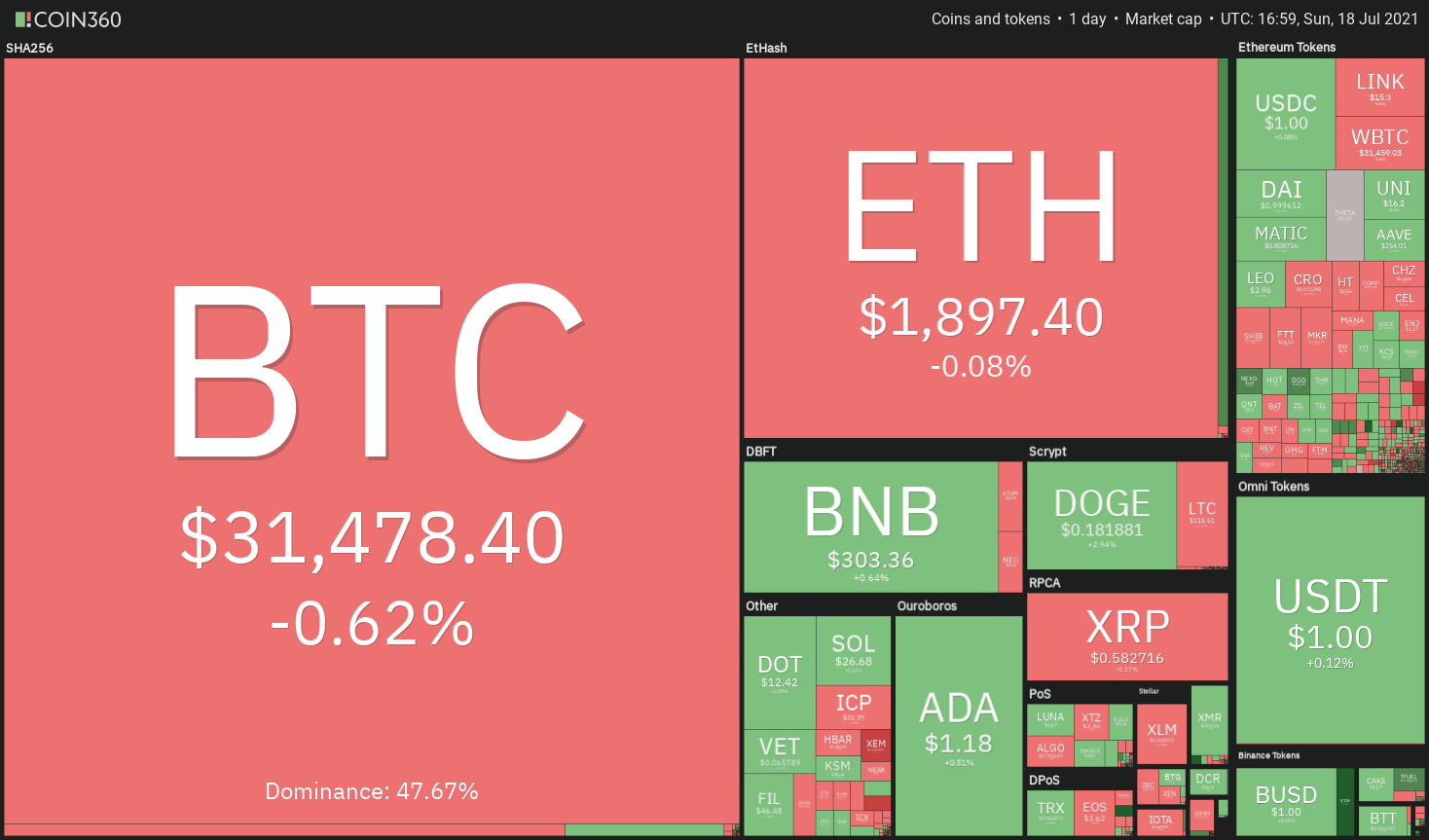 In a new report, Delphi Digital highlighted that trading activity had collapsed with spot exchange volumes having fallen more than 60% from the highs in May. The derivatives market has also seen an exodus of leverage traders and the Bitcoin futures open interest is back to the early 2021 levels.

Delphi Digital considers this a bullish sign as they believe that “stronger-handed participants are the ones primarily contributing to current open interest levels.”

Let’s study the charts of the top-5 cryptocurrencies that may outperform in the short term. 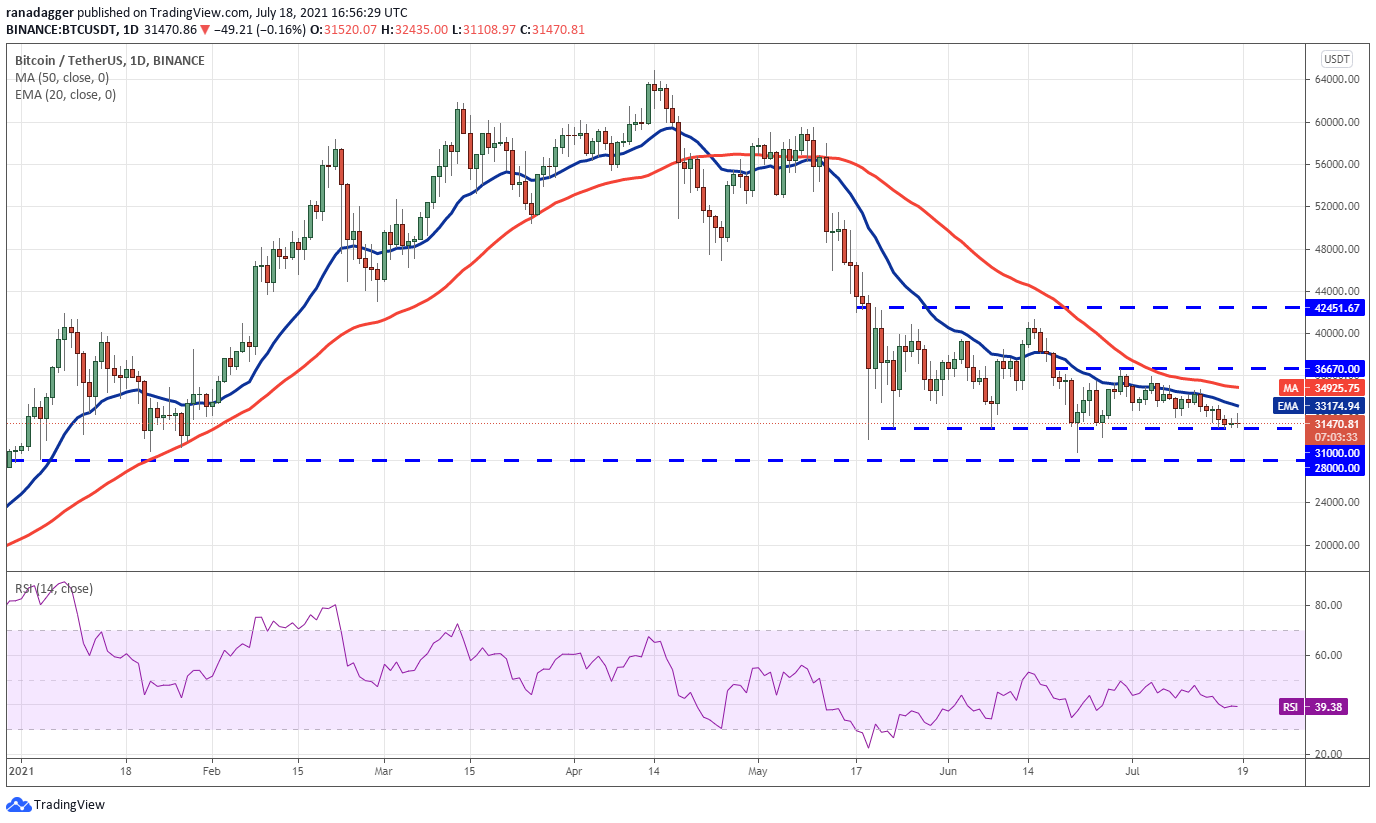 The 20-day exponential moving average ($33,174) is sloping down and the relative strength index (RSI) is in the negative zone, suggesting that bears have the upper hand. If sellers sink the price below $31,000, the BTC/USDT pair could drop to the next support at $28,000.

The $31,000 to $28,000 zone is critical for the bulls because if this zone cracks, the sentiment will sour further and could lead to long liquidation. That could intensify selling and result in a drop to $20,000.

Contrary to this assumption, if bulls sustain the rebound and push the price above the 50-day simple moving average ($34,925), it will signal that the selling pressure is reducing. That could increase the possibility of a break above $36,670. 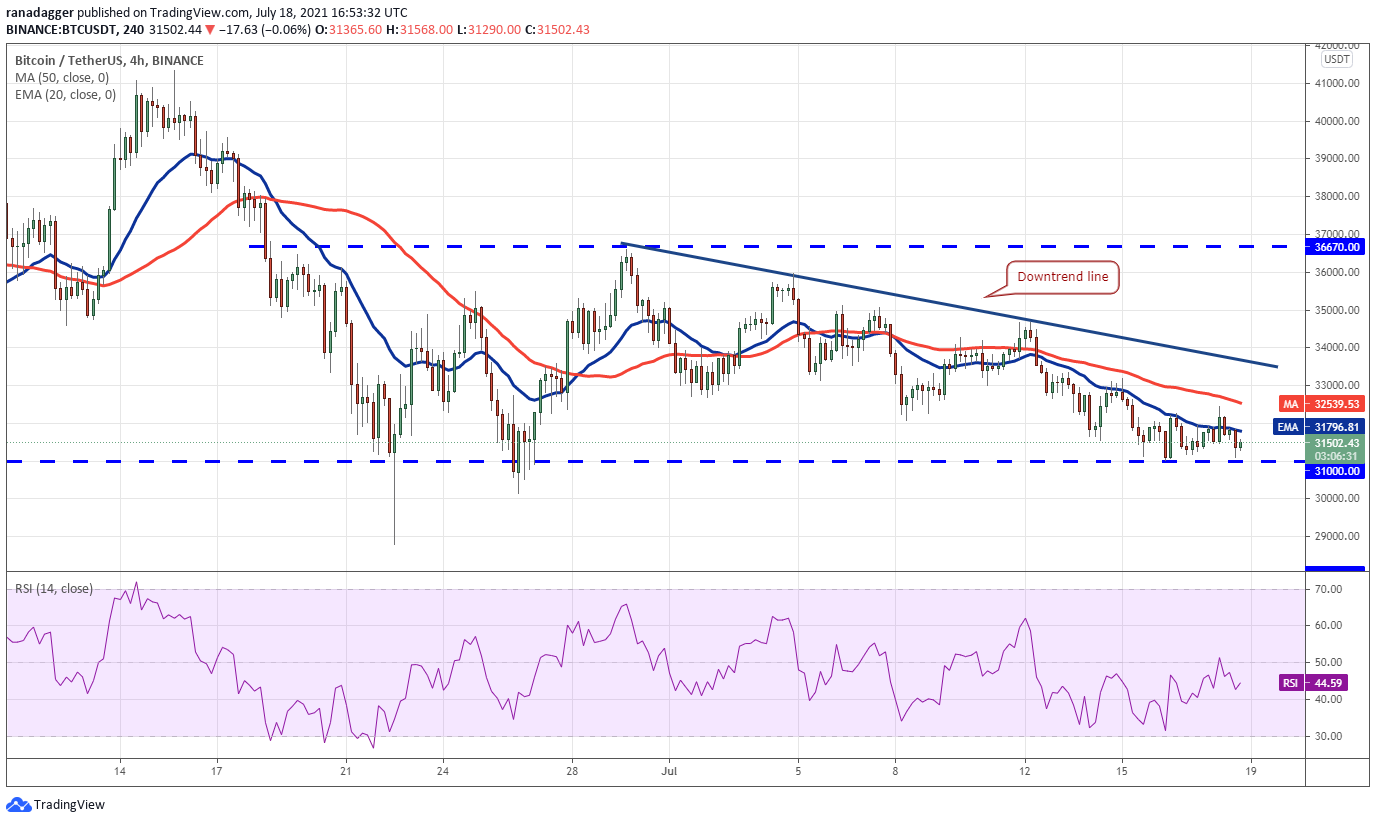 The bulls pushed the price above the 20-EMA on the 4-hour chart but they could not clear the hurdle at the 50-SMA. This suggests that bears continue to sell on rallies. The bears will now again try to sink the price below the $31,000 support.

If they succeed, the pair could drop to $30,000 and then to $29,000. The first sign of strength will be a break and close above the 50-SMA. The short-term trend will shift in favor of the bulls if the pair rises above the downtrend line.

Polygon (MATIC) has been correcting for the past few days and the price has reached the strong support zone at $0.74 to $0.68. The bulls are likely to defend this zone aggressively. 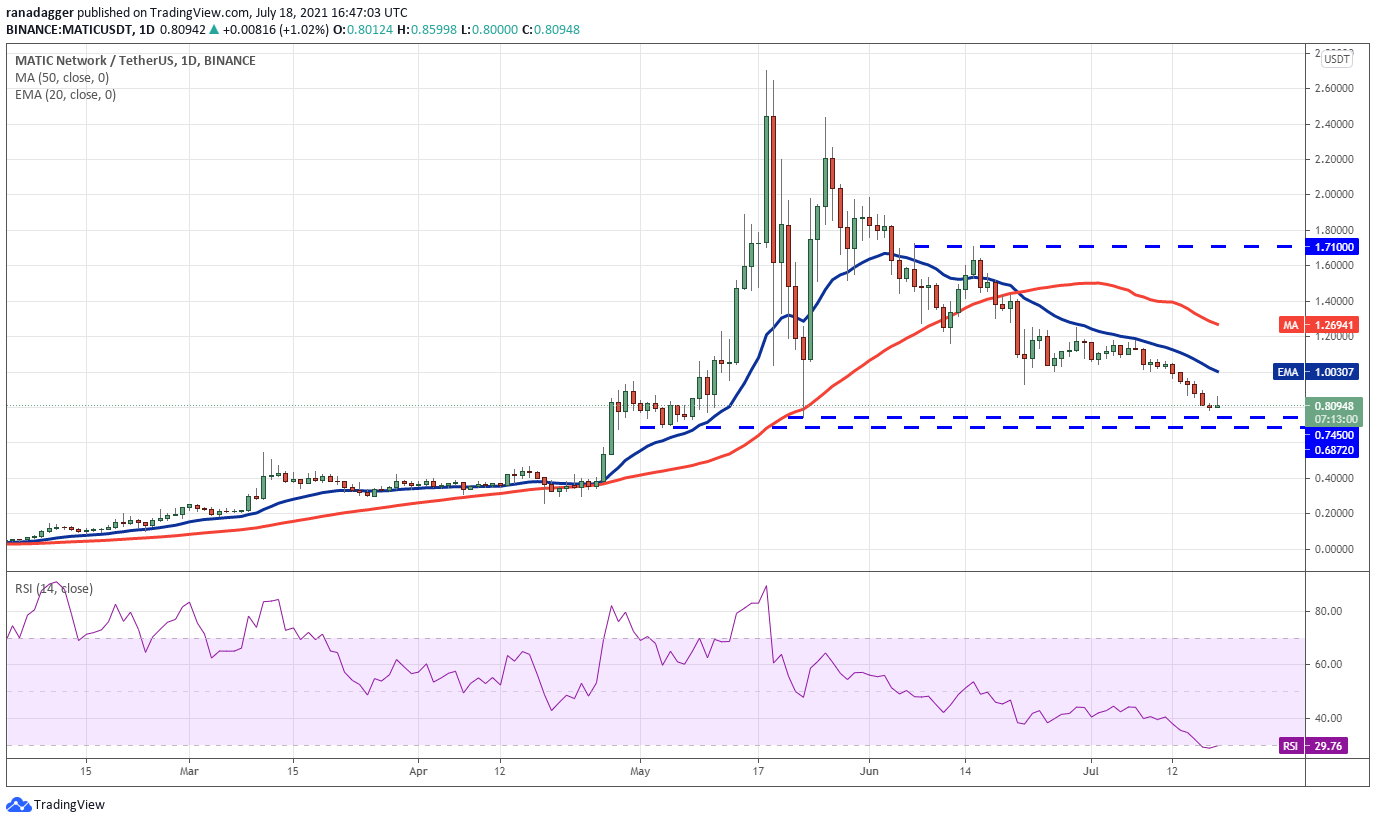 Although the moving averages are sloping down, the RSI is attempting to rebound off the oversold territory. This suggests that aggressive bulls are attempting to start a relief rally.

The first resistance on the upside is the 20-day EMA ($1). If the price turns down from this level and breaks below the support zone, the downtrend could resume and the MATIC/USDT pair may drop to $0.54 and then $0.34.

Alternatively, if bulls propel the price above the 20-day EMA, the pair could rise to the 50-day SMA ($1.26). A break above this resistance could open the doors for an up-move to $1.71. 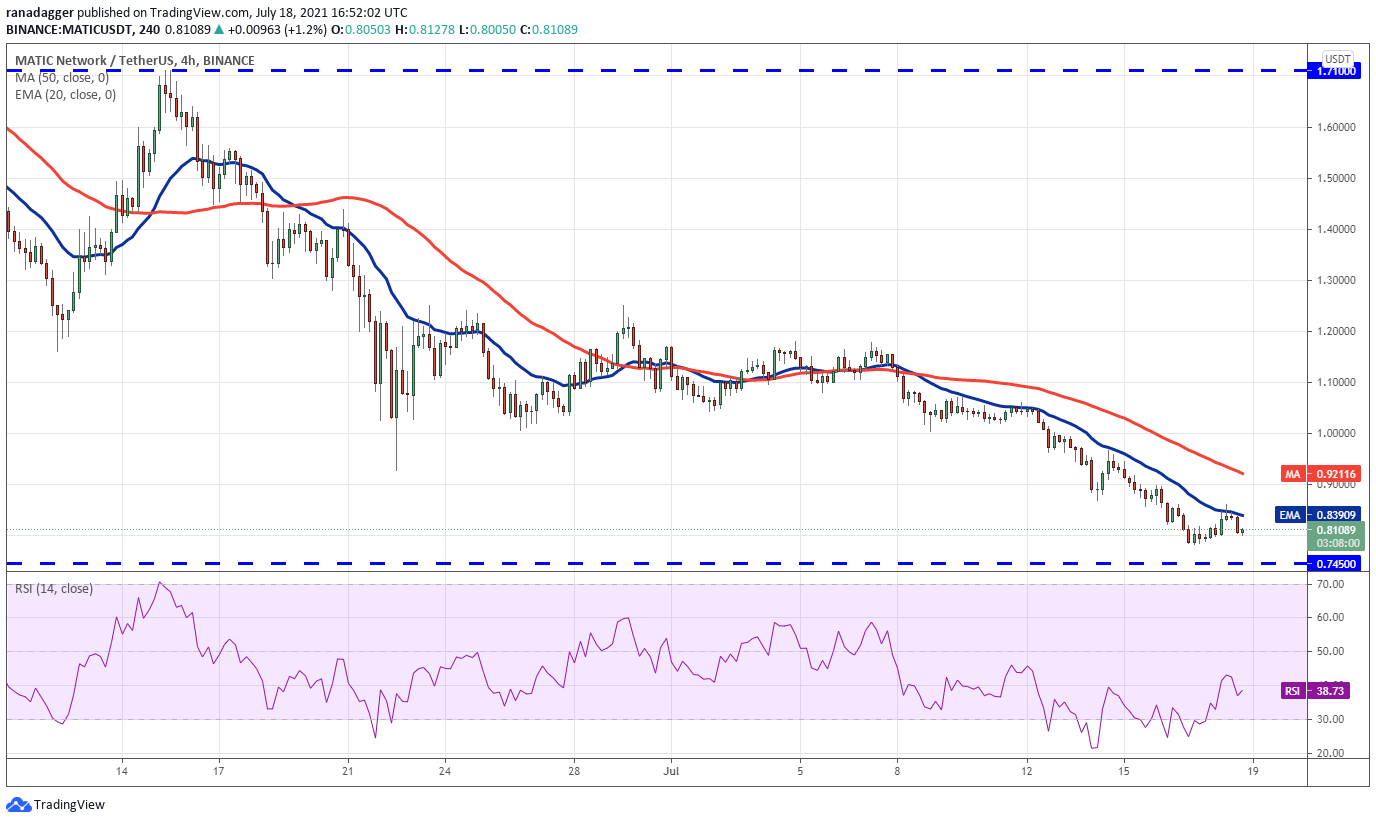 The rebound off $0.78 is facing resistance at the 20-EMA on the 4-hour chart. This suggests that bears are unwilling to let go of their advantage and are selling on rallies. The bears will now try to sink the pair to $0.74.

Conversely, if the price turns up from the current level, the bulls will once again try to push the price above the 20-EMA. If they manage to do that, the pair could rise to the 50-SMA. Above this resistance, the relief rally may reach $1.05. The down sloping moving averages suggest that bears are in command but the oversold levels on the RSI indicate the possibility of a countertrend rally. The first resistance on the upside is the 20-day EMA ($5.68).

If the price turns down from this resistance, the bears will make one more attempt to sink the THETA/USDT pair below the support zone. A break below $3.85 will signal the start of the next leg of the downtrend that could reach $2.60.

On the contrary, if bulls thrust the price above the 20-day EMA, the pair could rise to the downtrend line. A breakout of this resistance will suggest a possible trend change. 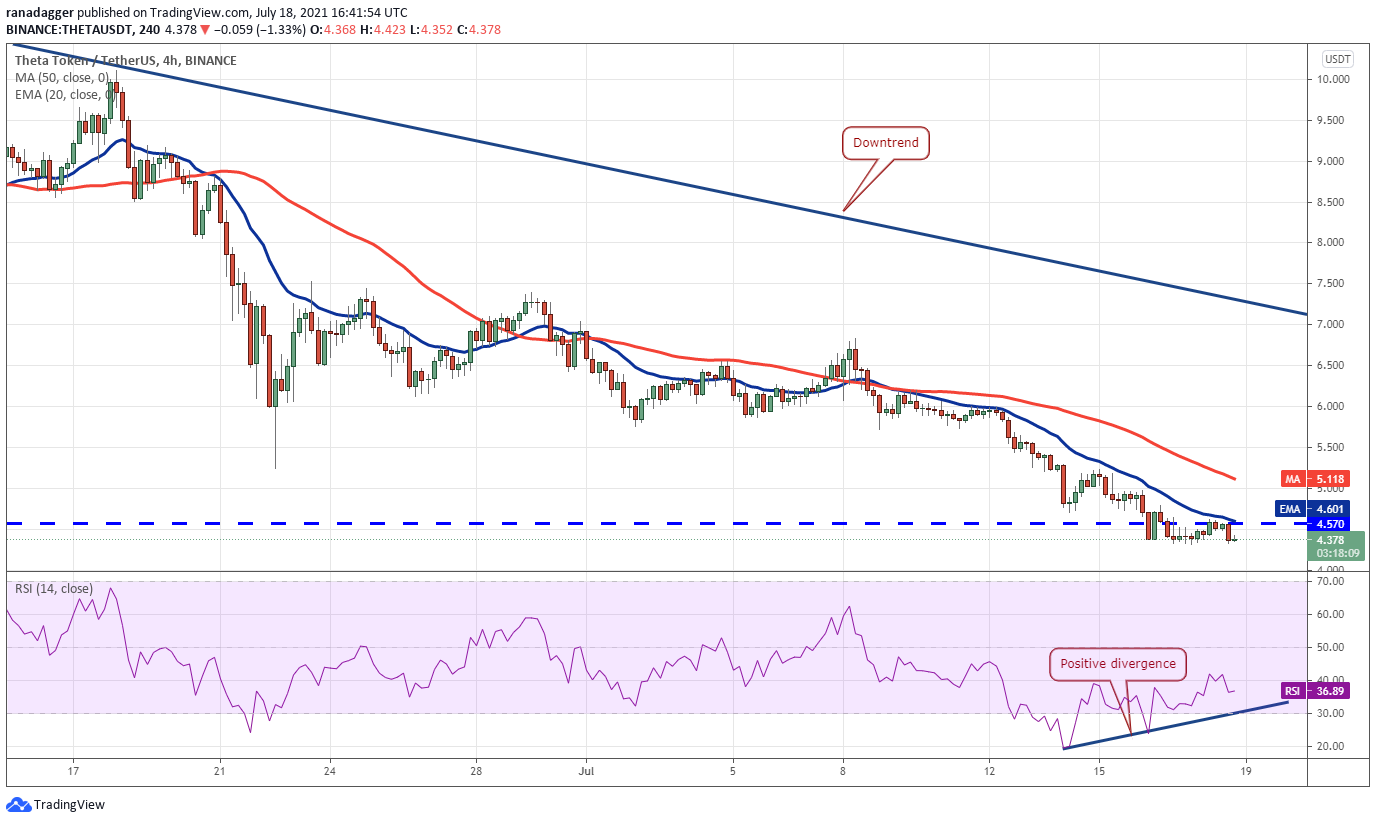 The pair has been consolidating in a tight range between $4.33 to $4.62. The RSI has formed a positive divergence on the 4-hour chart, indicating that the bearish momentum may be weakening.

Conversely, if bears sink and sustain the price below $4.33, the selling could intensify and the pair may drop to the psychological support at $4.

Crypto.com Coin (CRO) has been range-bound between $0.14 and $0.08 for the past few days. The price turned down from $0.13 on July 14 but the positive sign is that the bulls are trying to stall the correction near the moving averages. 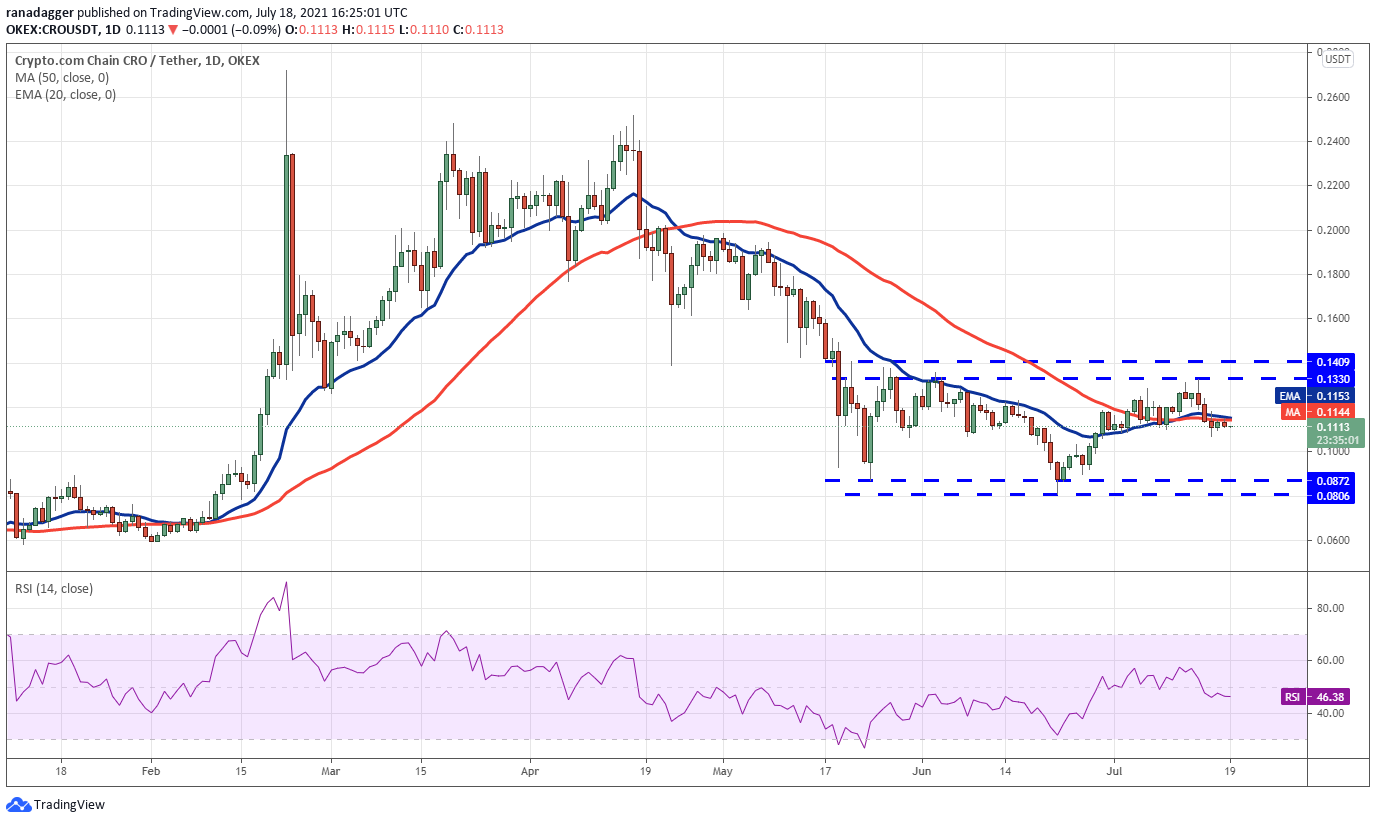 Both moving averages have flattened out and the RSI is just below the midpoint, indicating a balance between supply and demand. If the price turns down from the current level and breaks below $0.10, the pair could slide to the strong support at $0.08.

Conversely, if bulls push and sustain the price above the moving averages, the CRO/USDT pair could rise to the overhead resistance zone at $0.13 to $0.14. The bears are likely to defend this zone aggressively. If the price turns down from this zone, the range-bound action may continue for a few more days. 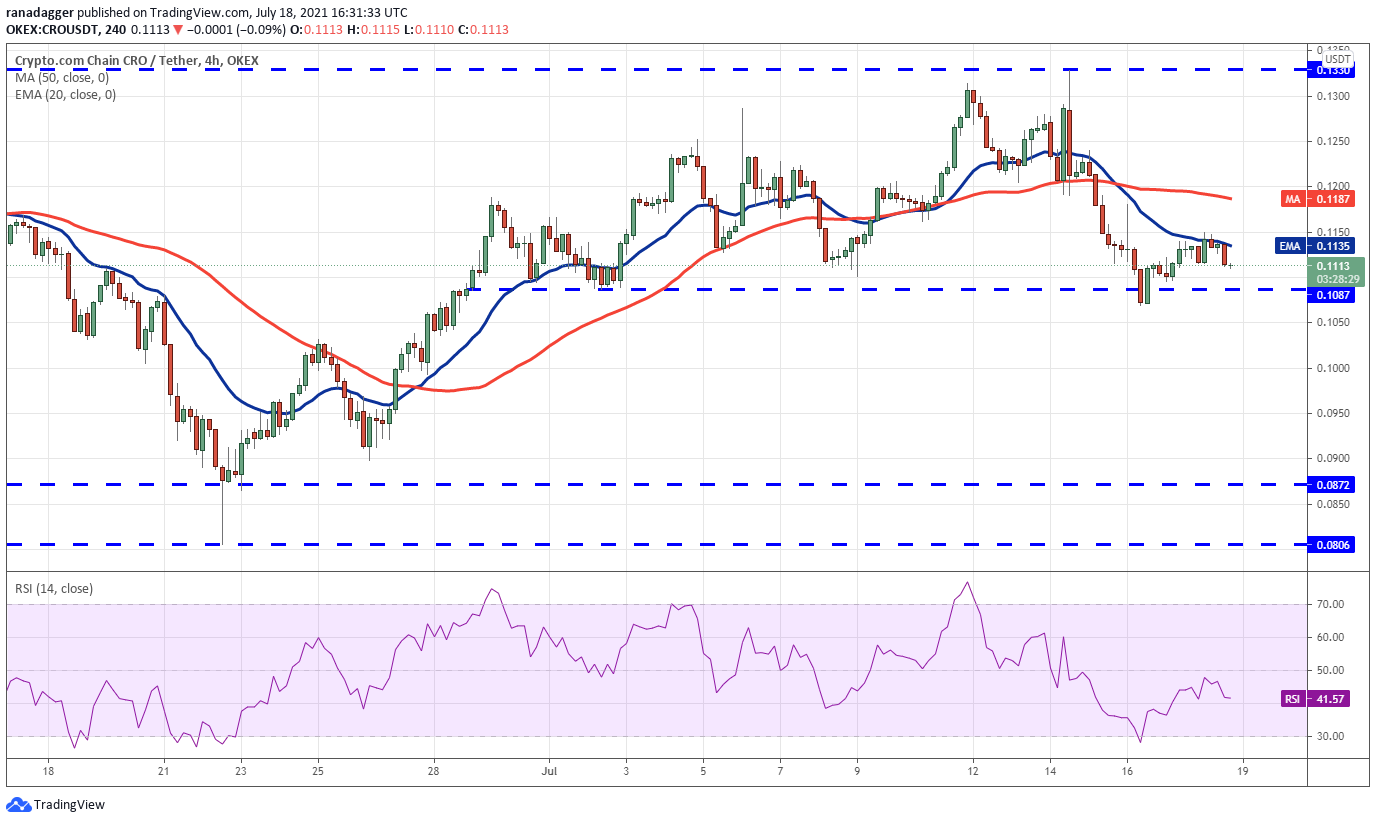 The bears pulled the price below the support at $0.108 but they could not build up on the advantage. The price recovered and rose to the 20-EMA but the bulls could not clear this hurdle. This suggests that bears have not given up and are selling on rallies.

If bears sink and sustain the price below $0.108, the pair could start its journey toward the critical support at $0.08.

On the contrary, if bulls drive the price above 20-EMA, the pair could rise to the 50-SMA. A break above this level will increase the possibility of a retest of the overhead resistance zone.

Related: Here’s one way to trade Bitcoin even as BTC price teeters over an abyss

Unus Sed Leo (LEO) has been trading near the resistance of the large range between $2.03 to $2.95 for the past few days. Usually, a tight consolidation near the overhead resistance indicates that bulls are not booking profits as they anticipate a breakout. Both moving averages have turned up and the RSI is above 63, indicating advantage to the buyers. If bulls sustain the price above $2.96, the LEO/USD pair could start its journey toward the next resistance at $3.32.

This positive view will invalidate if the price turns down from the current level and breaks below the 20-day EMA ($2.78).

Such a move will suggest that buyers have given up on the prospects of a breakout and are booking profits. That could pull the price down to the 50-day SMA ($2.59). The 4-hour chart shows the tight consolidation between $2.85 and $2.95 has resolved to the upside. If buyers sustain the price above $2.96, the bullish momentum could pick up and the pair may rise to $3.10 in the short term.

The 20-EMA has started to turn up gradually and the RSI is above 62, indicating a minor advantage to the bulls. Contrary to this assumption, if the price turns down and plummets below $2.80, the pair could slide to $2.67.