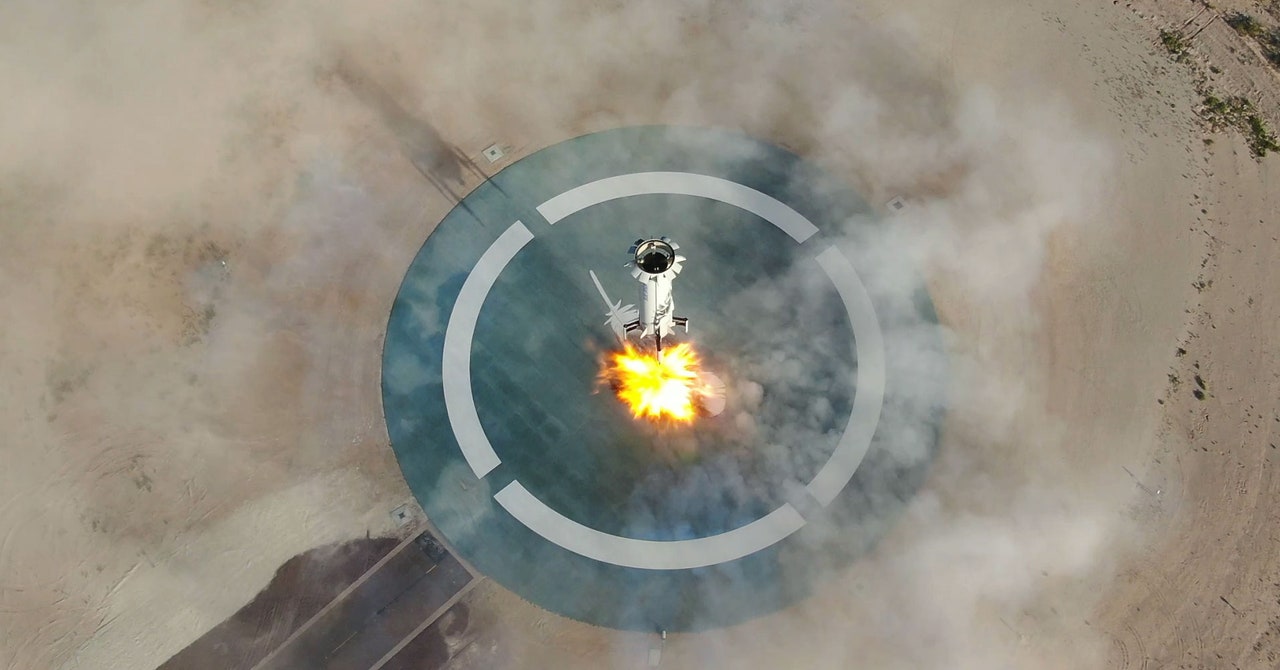 Yet something important is happening here, and it’s all about Bezos. To me, his self-directed inclusion on the passenger manifest of New Shepard’s first human flight is kind of bonkers, and it demands our attention. He’s not only the world’s richest human, but probably one of the smartest. Whether you approve of his business practices or not, he built a dominant and innovative company that’s changed many lives, and he saw opportunities where others did not. Yes, he was thrilled by space travel since he was a teenager, but as an adult his résumé demands that we take him seriously when he says that he’s doing this for far more than lifting the human spirit. He’s into lifting humans. That is why we can’t write him off as a crank when he says that our destiny—because Gaia is sick and can’t deliver the resources to sustain us—lies elsewhere in the solar system. When he physically gets on a spaceship, he’s putting more than money where his mouth is.

That’s why the so-called competition with Branson, who blatantly switched the Virgin Galactic testing schedule once he heard that Bezos would rise on July 20, is an unwelcome distraction to Bezos and company. Blue Origin should have stuck to the high ground. Instead, while publicly congratulating Branson, Blue has done some sniping, especially to contend that, while Virgin Galactic’s VSS Unity attained an altitude of around 50 miles, which is recognized as space travel by the FAA, it falls short of “real” space, the 62-mile Kármán Line that its crew capsule will cross. “None of our astronauts have an asterisk next to their names,” Blue Origin crowed in a tweet. (For the record, Alan Shepard’s suborbital flight 60 years ago went to 116 miles, almost twice as high as Blue Origin will go.)

In fact, there is something truly inspiring happening tomorrow: Wally Funk is going to space. I’ve been reading about her life—one of accomplishment, but with a dark shadow. She was the youngest member of the original Mercury 13, a group of women recruited in 1960 to train as astronauts for a private program. Funk aced every test, in some cases exceeding the performance of the male astronauts in Mercury 7. But when the moment came to bring the program into NASA, the government simply shut it down. The House held a hearing, and perhaps the most persuasive witness against women’s inclusion was John Glenn, who testified: “The fact that women are not in this field is a fact of our social order. It may be undesirable.”

Funk never got over the rejection. By the time NASA accepted female astronauts, the qualifications had changed, so she had no chance to win a spot. She’s spent her life training pilots and investigating aviation disasters for the National Transportation Safety Board. But the hole in her life was her failure to leave the atmosphere. With time running out, she’d pinned all her hopes on Branson’s Unity. She was among the the first to commit to a $200,000 seat on his version of a spaceflight and became one of Virgin Galactic’s most fervent customers, traveling thousands of miles to the events that the company would regularly host to assure ticket holders that it still intended to keep its promise. Snatching her away from Branson and including her on New Shepard’s maiden human flight was a coup, and I can’t wait to hear what she has to say tomorrow after she fulfills her life-long obsession.

On the other hand, if there was a Kármán line for inspiration, the selection of Oliver Daemen as the first paying customer would fall short of it. Funk had to wait 60 years for her flight, but 18-year-old Daemen was lucky enough to have a father who runs a hedge fund, who bid some millions of dollars in an auction for the open seat. (Blue Origin is sending the money to space-related nonprofits.) We don’t know what the sum is, but the original winning $28 million bid came from an unknown participant who mysteriously backed out days before the flight, citing a schedule conflict. (Are we to really believe someone committed $28 million to go to space without checking the calendar? More transparency, please. Maybe tell us how much the now winning underbid was. Also, when will Blue Origin announce the official price for future customers, starting with the two more flights planned for this year?) Daemen might be a splendid young man, and his dad must be a cool dude to buy his teenage son a seat on a private company’s first passenger trip into space, but his inclusion invites a discussion about parenting, safety, and privilege that I’m not sure Blue Origin wants to ignite.