UK worries Starlink and OneWeb may interfere with each other, plans new rules 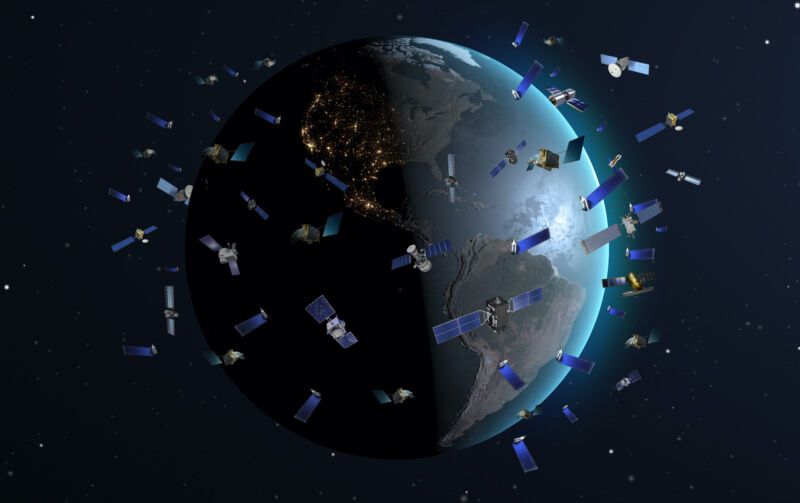 Enlarge / Artist’s impression of low-Earth-orbit satellites like those launched by SpaceX and OneWeb.

A UK government agency is worried that OneWeb, SpaceX’s Starlink, and similar low Earth orbit (LEO) satellite-broadband systems could block each others’ signals.

Ofcom, the UK’s communications regulator, proposed new rules today in a report that details its interference concerns. Ofcom also said it intends to amend satellite licenses already issued to SpaceX and OneWeb to require coordination of frequency use. Without new requirements, the risk of interference could prevent competition by shutting new players out of the market, Ofcom said.

Non-geostationary satellite orbit (NGSO) systems are more complex than the traditional geostationary type because they use hundreds or thousands of satellites, Ofcom noted. “Satellite dishes need to track these satellites as they move across the sky, unlike existing satellite networks, where the dishes are fixed pointing at a single satellite which is stationary in the sky,” the Ofcom report said. Because so many low-Earth-orbit satellites are being launched, “there is a risk of satellites from two different operators appearing to be in the same part of the sky,” causing interference known as “in-line events” in which multiple operators’ satellites are lined up in the sky, Ofcom wrote.

“Since NGSO satellites are moving relative to each other and relative to the ground, in-line events may individually only be brief, maybe a few seconds,” Ofcom wrote. “However, if an in-line event occurs and causes interference, it may take longer for the terminal to reconnect to the network. The interference could continue to repeat over time, reoccurring in a regular pattern which will depend on the orbits of the respective systems.”

3,236 satellites planned in its initial phase, the report noted.

OneWeb—which is co-owned by the UK government and Bharti Global—has launched over 200 satellites and has plans for 648 satellites in its initial phase. Telesat and Kepler round out the list, with plans for 298 and 140 satellites, respectively. 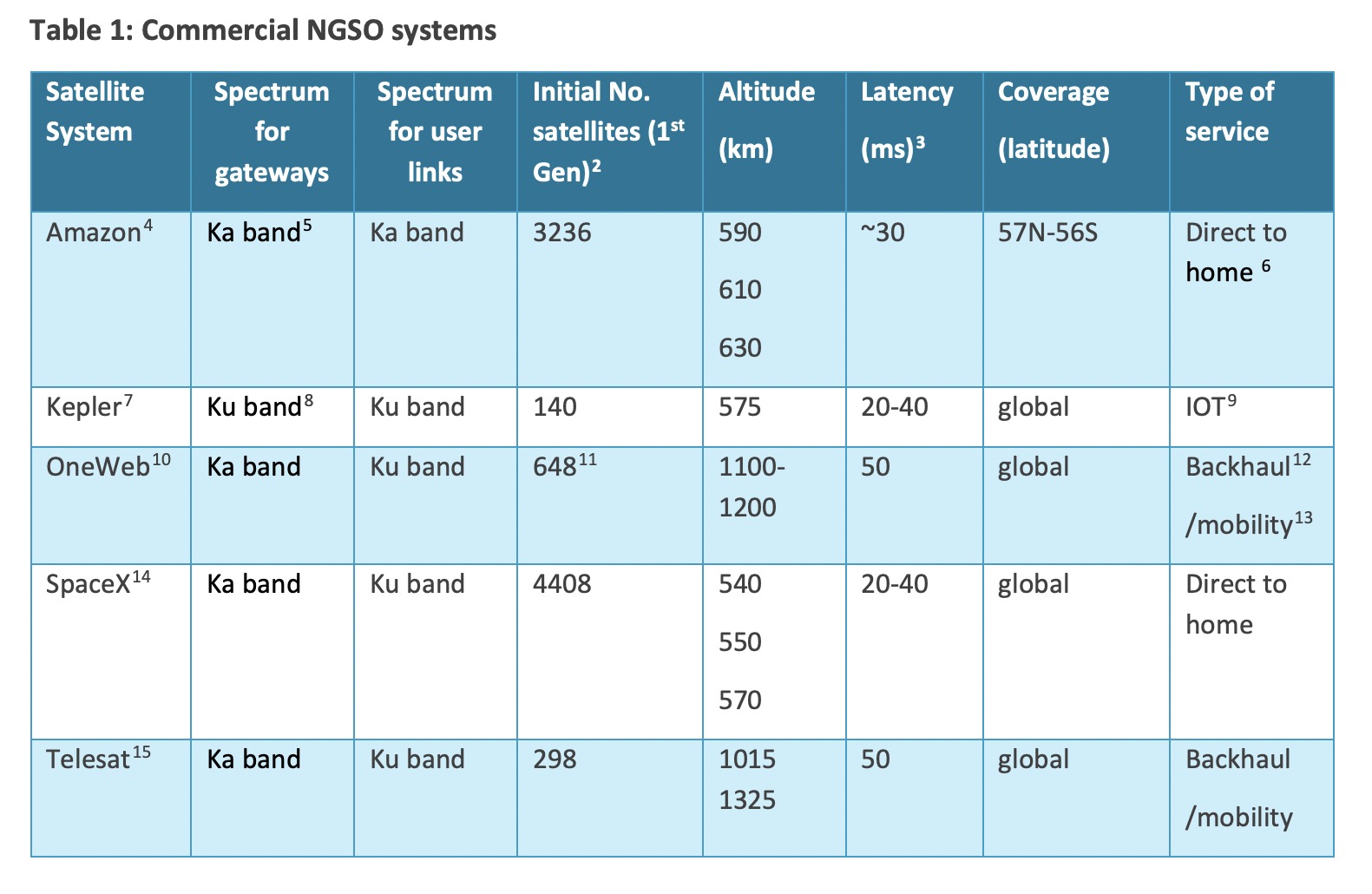 The US Federal Communications Commission in 2017 adopted rules, including power limits, to minimize the danger of interference in NGSO systems. The FCC adopted different rules for different slices of spectrum. In the 17.8 to 18.3 GHz band, for example, the FCC said, “while terrestrial use of this band is significant, there are areas, particularly rural areas, where terrestrial deployment is less dense and by using mitigating techniques like siting considerations, off-axis rejection, and shielding, we expect FSS [fixed-satellite service] earth stations will be able to operate successfully without receiving harmful interference… If interference does occur, earth stations can switch to other bands not shared with terrestrial users or use alternative mitigation techniques.”

The FCC also imposed specific conditions to prevent interference and space debris on licenses awarded to SpaceX, OneWeb, Amazon, and others.

Ofcom is worried that the global system for coordinating satellites, overseen by the International Telecommunication Union [ITU], isn’t good enough to prevent NGSO problems. “The potential for harmful interference between different satellite systems is usually managed by operators cooperating with each other under the ITU satellite coordination procedures,” Ofcom wrote.

However, coordination between NGSO systems is proving to be more challenging due to the dynamic nature of these systems, combined with operators having differing rates of deployment (some operators holding older filings will not deploy their systems for a few years) and changing their architecture over time. We are therefore concerned that NGSO satellite services could be deployed before an appropriate level of coordination has been possible with other operators.

Ofcom is also worried about the coexistence of user terminals when two or more companies provide LEO satellite service in the same area:

A lack of agreement over how user terminals of different systems can coexist in the same area and band could restrict competition as a result of earlier deployed systems hindering later ones. Once one operator starts deploying user terminals, other operators wishing to launch services using the same band may expect to experience harmful interference from the existing user terminals. In the worst case, this could mean that the quality of their broadband services would not be sufficiently reliable in order to enter the market. Nonetheless, the established player could have an incentive to cooperate given that the interference is likely to be mutual, i.e. their services could be degraded as well.

Ofcom said its goal in issuing new rules is to minimize interference while encouraging competition. The agency proposed, among other things, “an additional explicit license condition requiring NGSO licensees to cooperate so they can co-exist and operate within the UK without causing harmful radio interference to each other.” Ofcom said it also intends to “[i]ntroduce checks when we issue new NGSO licenses so that these are only granted if all systems (existing and new) are able to coexist and provide services to end users” and implement new conditions letting Ofcom “take action to resolve degradation to services if this were to occur at a particular location or location(s) in the UK.”

To preserve competition, Ofcom said it will “introduce a competition check” into its licensing process to account for the “technical constraints that the gateway or user terminals could create on future licensees.” Ofcom said:

In particular, in a market that was concentrated, if there was limited prospect of the licensee system and future systems (applicants) being able to technically coexist, then this could form a barrier to future entry to the market. As a result, we are proposing that a key piece of information that applicants should provide when applying for a network license is credible evidence about the technical ability for their system and future systems to coexist. This would include evidence about the flexibility of their system and/or what reasonable steps new licensees could easily undertake to protect them. This information would also be used when assessing whether it is reasonable for new applications and existing services to coexist, to understand the reasonableness of mitigations being undertaken by existing licensees.

Ofcom said it plans to review all NGSO licenses to determine which companies are using the same frequencies. The agency said it will also amend the existing licenses held by SpaceX Starlink, OneWeb, and Kepler. The changes would require “NGSO licensees to cooperate with the other NGSO licensees operating in the same frequencies so they can coexist,” and allow Ofcom “to require operators to take action in cases of interference between NGSO systems which impacts the provision of services to users in particular location(s) in the UK.”

Ofcom said it will take comments on its proposals until September 20, 2021.

We contacted SpaceX about Ofcom’s report and will update this article if the company provides a response.