3 reasons why Tezos (XTZ) price has gained 85% this month

The Ethereum (ETH) network is currently the dominant layer-one protocol in terms of smart contract deployment and active users, but the race to become the ‘world’s computer’ is far from settled because competing protocols are gaining traction by offering solutions to high transaction costs and slow confirmation times, the biggest problems facing the network.

One project that has been on the rise over the past month is Tezos, a proof-of-stake blockchain network that is designed to evolve over time without the needing to undergo a hard fork. 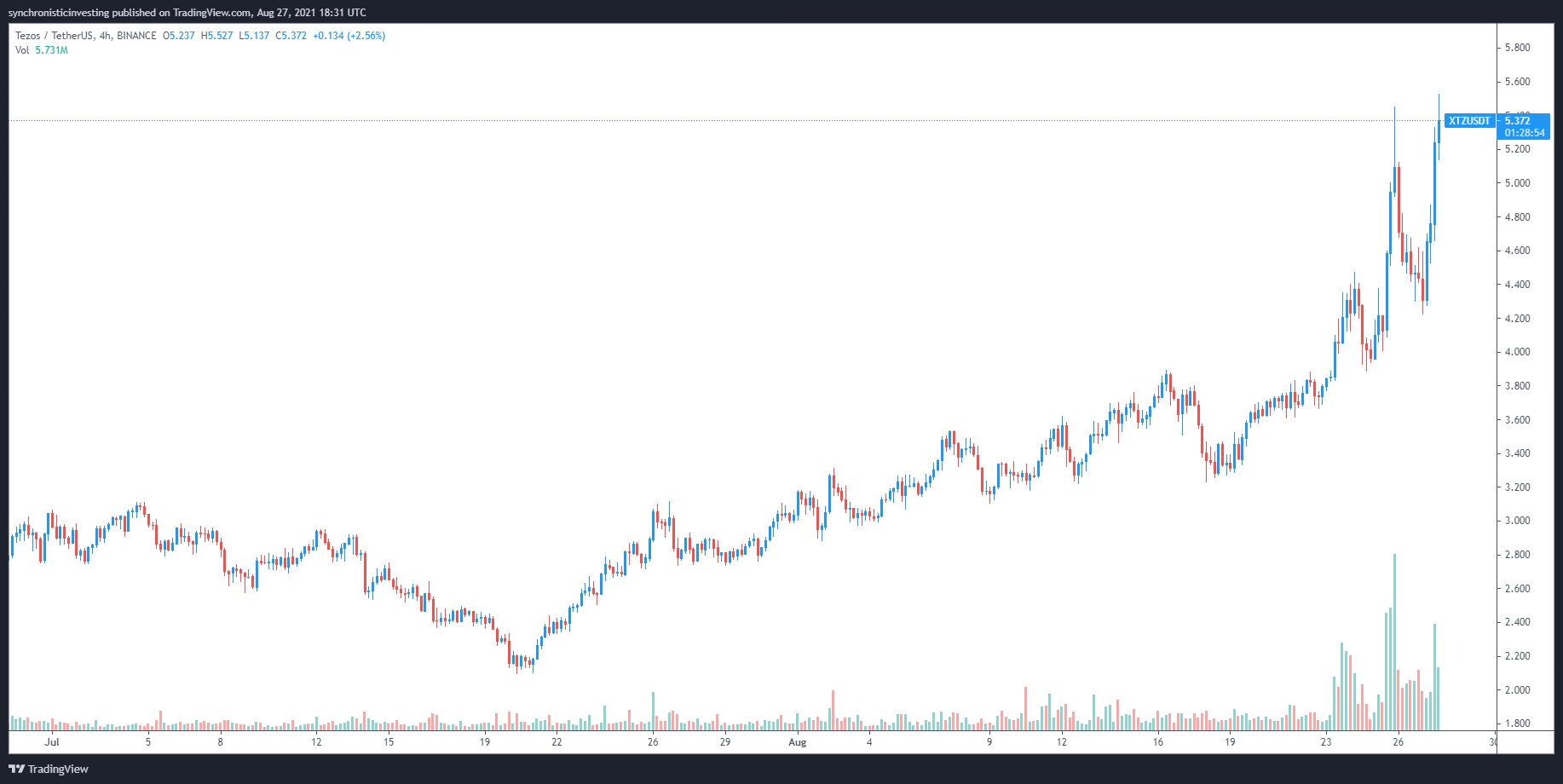 Three reasons for the strong growth seen in XTZ over the past month include improvements made to the network through the recent ‘Granada’ upgrade, the adoption of the Tezos network by several large banking institutions and attractive staking rewards that entice token holders to stake their coins on the network.

As mentioned earlier, the Tezos network is a self-amending blockchain that is capable of being upgraded over time without the need to undergo a hard fork.

Altogether, the Tezos network has undergone seven successful upgrades since launching and and three of them occurred in 2021. The most recent ‘Granada’ upgrade was implemented on Aug. 6.

According to the team at Tezos, some of the improvements from this recent upgrade include a reduction in the block time from 60 seconds to 30 seconds and a reduction in gas consumption by smart contracts by an average factor of 3 to 6 times.

The new upgrade also introduced liquidity baking which “incentivizes large amounts of decentralized liquidity provision between XTZ and tzBTC by minting a small amount of XTZ every block and depositing it inside of a constant product market-making smart-contract.”

A second development that helped provide a boost in the price and awareness was Tezos’s adoption by digital asset firm Crypto Finance AG and Swiss business-to-business transaction bank InCore. Both plan to launch a new tokenization tool on the network.

Thank you #InCoreBank and @inacta for another successful collaboration project! The innovative and compliant standard for asset #tokenisation of financial products (FA2) we have enabled together on @tezos is definitely shaping the #blockchain industry.https://t.co/vEENshU4Kh

XTZ also appears to be benefiting from attractive staking opportunities that have resulted in a majority of tokens being removed from circulation to help perform consensus in return for staking rewards.

According to data from StakingRewards, the current annualized rate for token holders who delegate their XTZ is 7.85%, while those who are more tech-savvy can start their own Tezos bakery and earn 8.73%.

The process of delegating XTZ is simple for the average user and can be done from any of the wallet interfaces suggested by the project, and multiple exchanges also offer staking services for a small fee including Coinbase, Kraken and Binance.

At the time of writing, data from TZStats indicates that 77.65% of the total supply of XTZ is being actively staked on the network which significantly limits the number of tokens available on the market and is a potential source of positive price pressure.