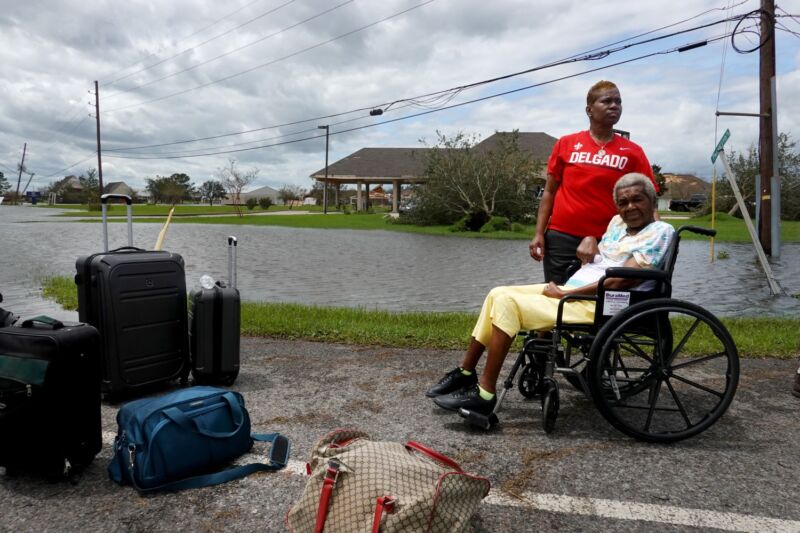 Enlarge / LaPlace, Louisiana: Jacqueline Smith waits with her mother Lucille Matthew for transportation after they were rescued from their flooded neighborhood in the aftermath of Hurricane Ida on August 30, 2021.
Getty Images | Scott Olson

AT&T today said that only 60 percent of its network in Louisiana is working as Hurricane Ida pummels the state. T-Mobile is reporting similarly extensive outages, while Verizon says it has minimized outages with backup generators. AT&T and T-Mobile both said they have deployed additional generators but the carriers apparently didn’t deploy enough to handle the widespread power outages.

“Our Louisiana wireless network is operating at 60 percent of normal and we have significant outages in New Orleans and Baton Rouge due to power outages, flooding and storm damage,” AT&T said in a network-status update. “We had key network facilities go offline overnight, and while some have already been restored, some facilities remain down and are inaccessible due to flooding and storm damage.”

AT&T said it has “mobilized additional disaster recovery equipment in the region to assist in the recovery and will work around the clock until service is restored.” AT&T said its wireless network in Alabama is operating normally and that it’s “seen only a very small wireless impact in Mississippi.”

Update: AT&T reported at 5:30 pm ET, shortly after this article published, that it has “made significant progress with restoration efforts and as of this afternoon more than 82 percent of our wireless network in Louisiana is operating normally.”

T-Mobile said today that its “network is about 70 percent operational across Louisiana and Alabama.” That percentage could be higher in Louisiana because it was harder-hit by the storm, but T-Mobile didn’t give a percentage for each state.

update on its website. “We have scattered cell sites throughout those main metro areas, with the majority of Verizon customers experiencing minimal service interruptions due to overlapping coverage (service from nearby cell sites).”

Verizon said it has “gaps in coverage” in coastal areas of Louisiana, Thibodaux, Morgan City, Houma, Hammond, and the southern coastline of Lake Pontchartrain.

“Despite the extensive devastation, Verizon’s network remains resilient, and our teams are actively assessing the situation to engage rapidly in recovery efforts,” Verizon said. “While we are seeing sites out of service in the heaviest hit areas, overlapping sites are offering some coverage to residents and first responders who remain there.” Verizon said it has “backup generators running at cell sites and switch facilities, and we are on standby to refuel generators as soon as needed when it is safe for crews to be out.”

Verizon said that flooding and debris are making it difficult to access network equipment, which could delay repairs. “We will prioritize assistance for first responders, emergency operation centers, and search and rescue efforts,” Verizon said.

All three major wireless carriers are providing unlimited calling, texting, and data to customers in the hardest-hit areas via free, temporary upgrades.