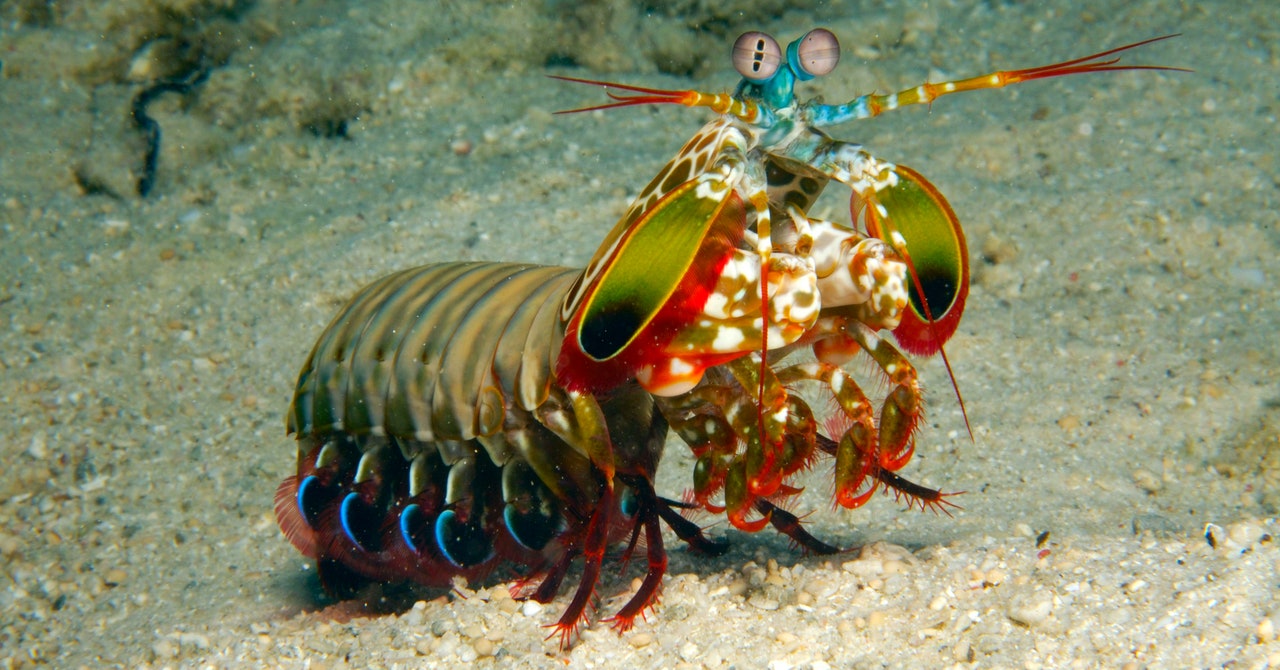 The mantis shrimp boasts one of the most powerful and ultrafast punches in nature—it’s on par with the force generated by a .22-caliber bullet. This makes the creature an attractive object of study for scientists eager to learn more about the relevant biomechanics. Among other uses, it could lead to small robots capable of equally fast, powerful movements. Now, a team of Harvard University researchers has come up with a new biomechanical model for the mantis shrimp’s mighty appendage, and it built a tiny robot to mimic that movement, according to a recent paper published in the Proceedings of the National Academy of Sciences.

“We are fascinated by so many remarkable behaviors we see in nature, in particular when these behaviors meet or exceed what can be achieved by human-made devices,” said senior author Robert Wood, a roboticist at Harvard University’s John A. Paulson School of Engineering and Applied Sciences (SEAS). “The speed and force of mantis shrimp strikes, for example, are a consequence of a complex underlying mechanism. By constructing a robotic model of a mantis shrimp striking appendage, we are able to study these mechanisms in unprecedented detail.”

Wood’s research group made headlines several years ago when it constructed RoboBee, a tiny robot capable of partially untethered flight. The ultimate goal of that initiative is to build a swarm of tiny interconnected robots capable of sustained untethered flight—a significant technological challenge, given the insect-size scale, which changes the various forces at play. In 2019, Wood’s group announced its achievement of the lightest insect-scale robot so far to have achieved sustained, untethered flight—an improved version called the RoboBee X-Wing. (Kenny Breuer, writing in Nature, described it as “a tour de force of system design and engineering.”)

Now, Wood’s group has turned its attention to the biomechanics of the mantis shrimp’s knock-out punch. As we’ve reported previously, mantis shrimp come in many varieties; there are some 450 known species. But they can generally be grouped into two types: those that stab their prey with spear-like appendages (“spearers”) and those that smash their prey (“smashers”) with large, rounded, and hammer-like claws (“raptorial appendages”). Those strikes are so fast (as much as 23 meters per second, or 51 mph) and powerful, they often produce cavitation bubbles in the water, creating a shock wave that can serve as a follow-up strike, stunning and sometimes killing the prey. Sometimes a strike can even produce sonoluminescence, whereby the cavitation bubbles produce a brief flash of light as they collapse.

According to a 2018 study, the secret to that powerful punch seems to arise not from bulky muscles but from the spring-loaded anatomical structure of the shrimp’s arms, akin to a bow and arrow or a mousetrap. The shrimp’s muscles pull on a saddle-shaped structure in the arm, causing it to bend and store potential energy, which is released with the swinging of the club-like claw. It’s essentially a latch-like mechanism (technically, Latch-mediated spring actuation, or LaMSA), with small structures in the muscle tendons called sclerites serving as the latch.

That much is well understood, and there are several other small organisms capable of producing ultra-fast moves through a similar latching mechanism: frogs’ legs and chameleons’ tongues, for instance, as well as the mandibles of trap jaw ants and exploding plant seeds. But biologists who have been studying these mechanisms for years have noticed something unusual in the mantis shrimp—a 1-millisecond delay between when the unlatching and the snapping action occurs.

“When you look at the striking process on an ultra-high-speed camera, there is a time delay between when the sclerites release and the appendage fires,” said co-first author Nak-seung (Patrick) Hyun, a postdoctoral fellow at SEAS. “It is as if a mouse triggered a mousetrap but instead of it snapping right away, there was a noticeable delay before it snapped. There is obviously another mechanism holding the appendage in place, but no one has been able to analytically understand how the other mechanism works.”