Evolve or die: How smart contracts are shifting the crypto sector’s balance of power

One of the familiar themes seen in previous crypto market cycles is the shifting market caps, popularity and ranking of the top 10 projects that see significant gains during bull phases, only to fade into obscurity during the bear markets. For many of these projects, they follow a recognizable boom-to-bust cycle and never return to their previous glory.

During the 2017–2018 bull market and initial coin offering (ICO) boom, which was driven by Ethereum network-based projects, all manner of small smart contract-oriented projects rallied thousands of percentage  to unexpected highs.

During this time, projects like Bitcoin Cash (BCH), Litecoin (LTC), Monero (XMR) and ZCash (ZEC) also rotated in and out of the top 10 ranking, but to this day, investors still argue about which project actually presents a “useful” use case.

While all of these tokens are still unicorn-level projects with billion-dollar valuations, these large-cap megaliths have fallen far from their previous glory and now struggle to stay relevant in the current ecosystem.

Let’s take a look at a few of the current projects that threaten to unseat these dinosaur tokens from their perch.

Dollar-pegged stablecoins take the stage as the most “transactable” currency

Bitcoin’s (BTC) original use case stipulated that it would simplify the process of conducting transactions, but the network’s “slow” transaction time and the cost associated with sending funds makes it a better store of value than a medium of exchange when the other blockchain networks are considered as options.

Terra (LUNA), a protocol focused on creating a global payment structure through the use of fiat-pegged stablecoins, has emerged as a possible solution to the issues faced when trying to use the top proof-of-work (PoW) projects as payment currencies.

The main token used for transacting value on Terra aside from LUNA is TerraUSD (UST), a U.S. dollar-pegged algorithmic stablecoin that forms the basis of Terra’s decentralized finance (DeFi) ecosystem. The market cap of UST has steadily been increasing throughout 2021 as activity and the number of users in the ecosystem increased.

The recent addition of Ether (ETH) as a collateral choice for minting UST on Anchor protocol has given token holders a way of accessing the value in their Ether without having to sell and create a taxable event.

This opens the possibility for other tokens such as BTC to be utilized as collateral to mint UST that can be used in everyday purchases.

As it stands, the borrowing APR for UST on Anchor stands at 25.85%, while the distribution APR is at 40.67%, meaning users who borrow UST against their LUNA or Ether actually earn a yield while borrowing against their tokens.

Privacy is also a cornerstone characteristic of the cryptocurrency sector and privacy-focused projects like XMR and ZEC offer obfuscation technologies that support covert or what, for a time, were thought to be untraceable transactions.

Unfortunately, regulatory concerns have made it more challenging for users to access these tokens, as many exchanges have delisted them for fear of drawing the ire of regulators and the overall demand among crypto users has declined alongside their availability.

Their lack of smart contract capabilities has also limited what these protocols are capable of and, so far, users do not appear to be too excited about utilizing Wrapped Monero (WXMR) for use in DeFi, as the token loses its privacy capabilities in the process.

These limitations have led to the development of privacy-focused protocols such as the Secret Network, which allows users to create and use decentralized applications (DApps) in a privacy-preserving environment.

Privacy features are not common among smart contract capable platforms in the crypto ecosystem, which makes Secret something of an experimental case in the ever-evolving Web 3.0 landscape. 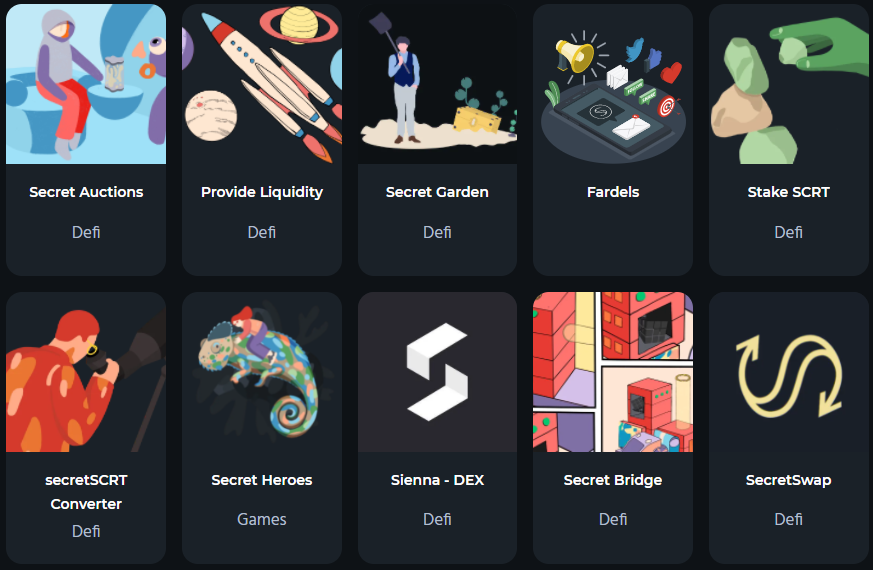 Secret is also part of the Cosmos ecosystem which means it can utilize the Inter-blockchain Communication (IBC) protocol to seamlessly interact with other protocols in the ecosystem.

The network’s native SCRT can be used as the value transfer medium on the platform as well as to interact with protocols that operate on the network, including Secret DeFi applications and the network’s NFT offering, Secret Heroes.

New enterprise solutions aren’t better but they come without controversy

One of the ways cryptocurrency projects sought to differentiate themselves from the “medium of exchange” label was to offer enterprise solutions as a way to help corporations navigate the transition to a blockchain-based infrastructure.

XRP and Stellar (XLM) are two of the veteran protocols that fit this bill, but continual controversy and slow development has resulted in these early movers now playing catch up with newer networks that also don’t have the legal controversy that has followed Ripple for years.

Hedera Hashgraph has emerged as a competitor in this field and data shows that the network is capable of processing more than 10,000 transactions per second (TPS), with an average transaction fee of $0.0001 and a time to finality of 3-5 seconds.

These statistics are comparable to both XRP and XLM, which have indicated that their ledgers reach consensus on all outstanding transactions every 3-5 seconds with an average transaction cost of 0.00001 XRP/XLM.

For each sector (stablecoins, privacy and enterprise solutions), the main difference between the old-school and next-generation projects has been the introduction of smart contract capabilities and plans to develop within the side-chain and DeFi sectors where the top protocols exist. This gives newer projects additional utility, allowing them to meet the demand of investors and developers, thus increasing their token values and market caps as a result.

With smart contracts, the ability to interact with the growing DeFi landscape comes built-in, whereas the legacy tokens like LTC, XMR and BCH require special wrapping services which insert middlemen and thus insert additional fees, rigor and risk into the process.

Newer protocols have also embraced the more eco-friendly proof-of-stake consensus model that aligns with the larger global shift toward environmental awareness and sustainability. A plus is that holders can also stake their tokens directly on the network for a yield.

It remains to be seen if the slow march of time will eventually lead to a capital migration from older large cap projects to the newer generation protocols or if these legacy blue-chips will find a way to evolve and survive into the future.

Want more information about trading and investing in crypto markets?