From Star Trek–like medical scanners to concepts for off-planet agriculture like in The Expanse, science fiction has often inspired actual research at NASA and other space agencies. This week, researchers are meeting at a virtual conference for the NASA Innovative Advanced Concepts (NIAC) program to brainstorm and investigate sci-fi-like ideas, some of which may very well shape the missions of the next 20 years.

A drone helicopter hopping about a Martian crater or a lunar rover that maps moon ice might have seemed far-fetched a decade ago, but the copter actually flew earlier this year, and the rover is in the planning stages. Now the conference organizers have solicited proposals for more exploratory projects, a few of which the agency might eventually fund. “We invest in long-term, far-out technologies, and most of them probably won’t work. The ones that do might change everything. It’s high risk, high payoff, almost like a venture capital investment portfolio,” says Jason Derleth, the NIAC program executive.

The program isn’t focused on incremental developments but instead seeks game-changing technologies, ones that are 10 times better than the state of the art, Derleth says. He likens it to the Pentagon’s Defense Advanced Research Projects Agency, which also explores extremely speculative concepts but developed the precursor to the modern internet, among other innovations.

The annual conference, which continues through Thursday, September 23, is publicly viewable on NIAC’s livestream. Some of the proposals discussed so far—such as for new ways to launch foldable space stations or astronaut habitats, or to extract resources from other worlds—revolve around the understanding that, for lengthy space voyages, you have to make the most of every rocket launch.

The next generation of space travelers will need resources for survival, for protective structures, and to fuel the journey further or return home. “This leaves us with two options: Take everything with us, like if you were going on a hiking trip in the desert. Or find new and creative ways to use whatever is already there,” says Amelia Greig, an aerospace engineer at University of Texas at El Paso, who presented at the conference on Tuesday.

To aid creative reuse of lunar resources, Greig and her colleagues propose a technology called ablative arc mining, which would slurp up water ice and the kinds of metals that could be used as building materials. “It’s like using controlled lightning bolts to mine the moon,” she said during her presentation. Her concept describes a van-sized moon crawler—named after the Jawa sandcrawlers of Star Wars—that picks a spot, and then places a ringed device that it carries on its front end parallel to the ground. Electric arcs zap across the ring, which can be made as large as a meter in diameter, ripping particles from the moon’s surface. Those particles, now charged, can then be moved and sorted by the machine’s electromagnetic fields. That way, rather than scoping just one resource, a single piece of equipment could fill one container with water, another with oxygen attached to other elements, and others with silicon, aluminum, or other metal particles. 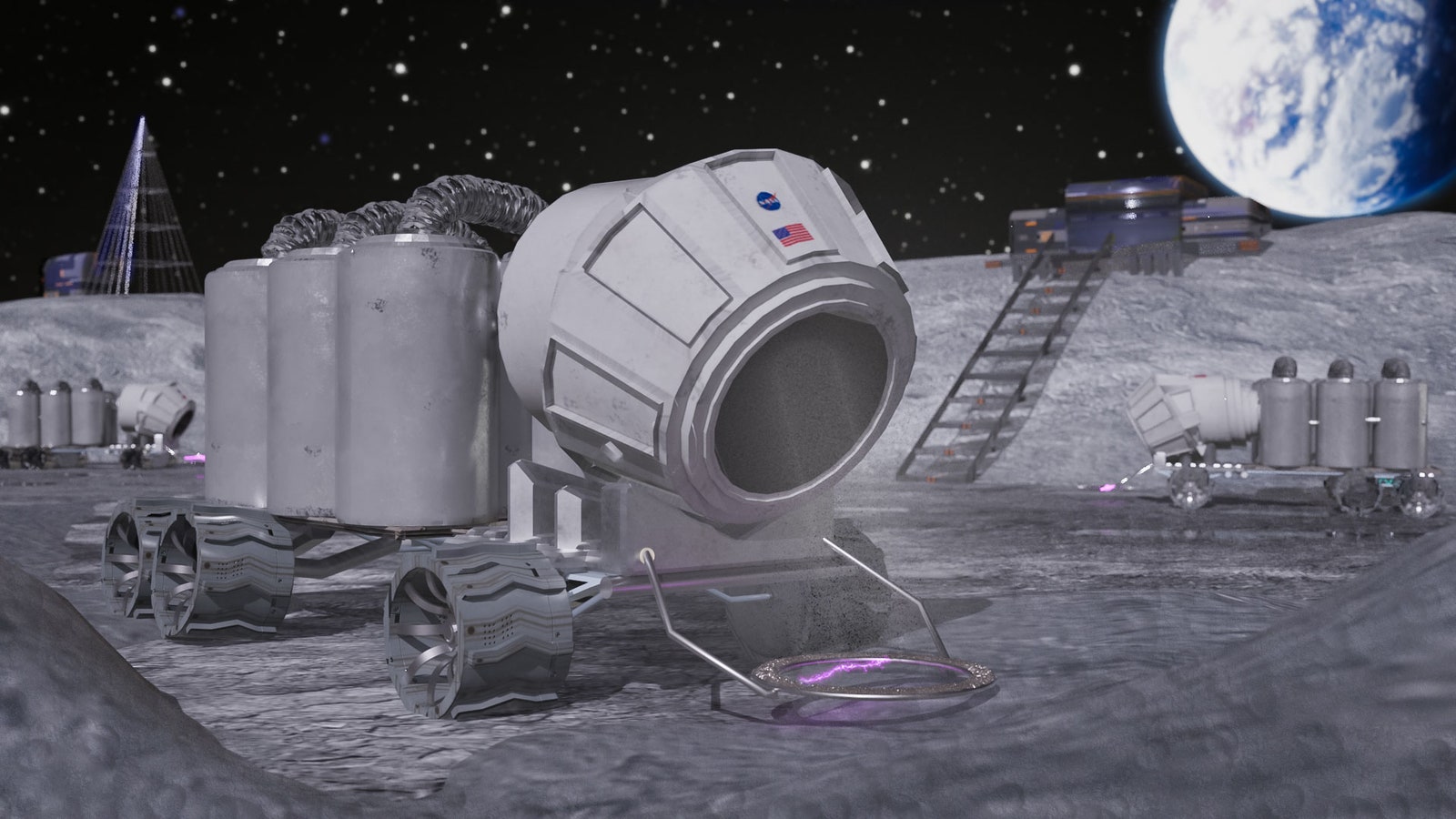 An artistic representation of the ablative arc mining system deployed into a crater near the lunar south pole.