ProGrade Versus Sony CFexpress Type A Cards: Is There a Difference? 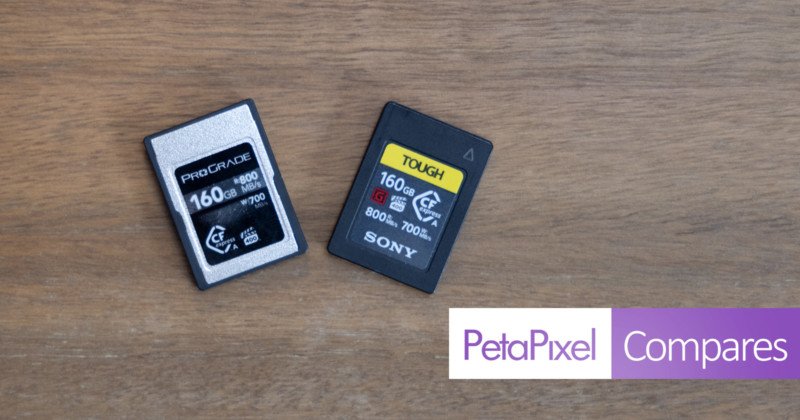 ProGrade Digital just released the first CFexpress Type A cards that aren’t made by Sony and while they aren’t “cheap” by any stretch of the imagination, they are more affordable than Sony’s offering. But does that discount come at a performance cost?

At the time of publication, CFexpress Type-A memory cards were only used by Sony in a few of its newer cameras like the Alpha 1. The format is much smaller than a CFexpress Type B card and while Type A cards will never be as fast, Sony chose them for its line of cameras because they have a secondary benefit: the small size lets them share a card slot that can also be used with legacy SD cards.

SD cards are actually bigger than CFexpress cards, which let Sony build a slot in both its cameras and its CFexpress card reader that lets the one slot pull double duty. For photographers, this means that Sony could support faster read and write speeds to get the most out of its new cameras while also not forcing photographers to pick up all-new media.

That choice is great because Sony’s CFexpress Type A cards are — at the time of publication — $400 for 160GB of capacity, a considerable investment. 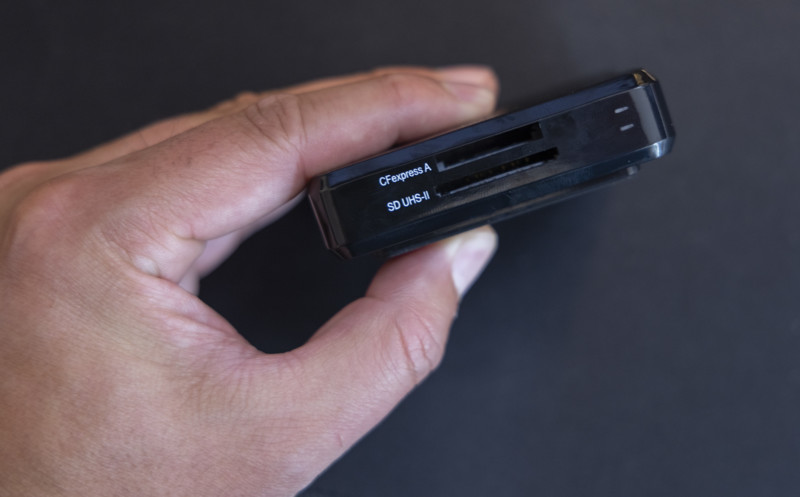 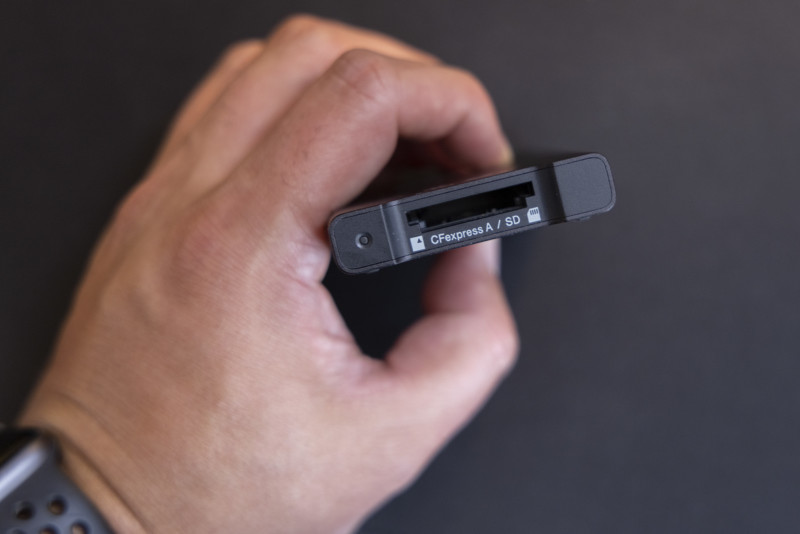 As you can see above, ProGrade elected to keep its two memory card reader slots separate.

While the format isn’t widespread yet, ProGrade Digital believes it will become more popular in the future and as such has decided to join the party and just released its version of the media.

Performance-wise, both Sony and ProGrade promise the same read and write speeds and physically both devices look almost identical — in fact, both cards note the country of origin as the same as well: Taiwan. The only real differences between them appear to be minor design choices on the back of the cards and a $70 price margin. 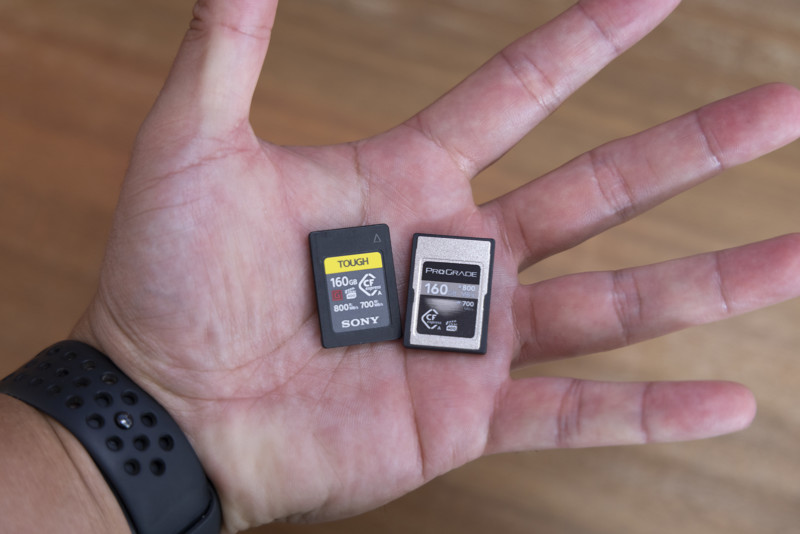 The only real way to repeatedly test and determine if there is a difference between these two cards is to run them each through speed tests. Theoretically, I could fire a burst of photos on camera with each card and time how long it takes to clear the buffer, but there is no reason to believe that the speed tests here would provide a different result especially since — as I’ll explain below — I used two different card readers. Additionally, this method is much more repeatable and controlled.

For this test, I have both the Sony and ProGrade CFexpress cards as well as the official card readers from both companies: the Sony MRW-G2 and the ProGrade Digital CFexpress Type A and SD Reader. I ran both cards through both of the readers in order to both see if there was any benefit to using a card reader and card from the same manufacturer, but also to assure that there was no unfair advantage that would appear by using a Sony card on a Sony reader, for example. I did not think one would exist, but it’s safer to be sure.

I ran speed tests using the BlackMagic Speed Test application on an Apple MacBook Pro multiple times. Both card readers were connected via USB-C cables into the reader and into the laptop — I did not use the cable that converts the USB-C design to USB-A. Testing speeds on cards varies with each run that the card goes through and performance will vary slightly depending on individual cards and over time, but the screenshots below are good overall averages of what you can expect from the cards. 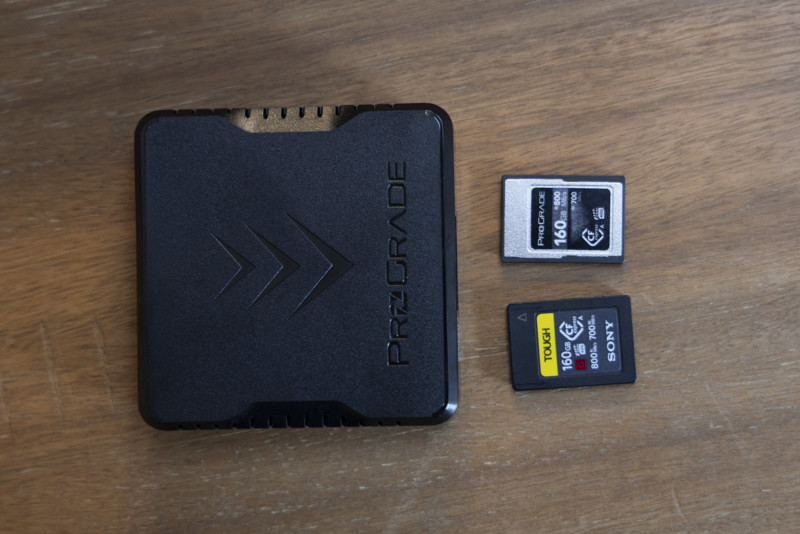 First I want to show the results from running both cards through the ProGrade Digital combination CFexpress Type A and SD card reader: 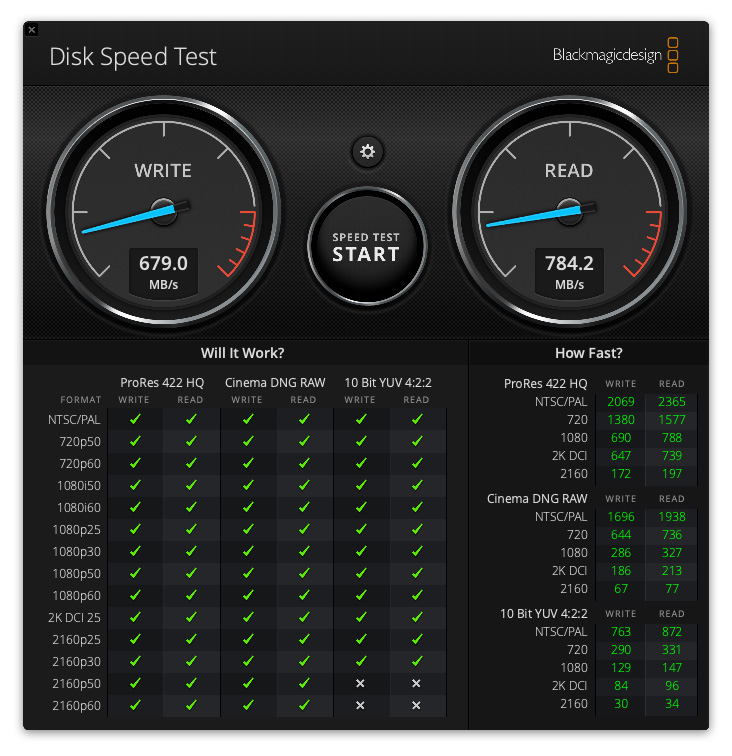 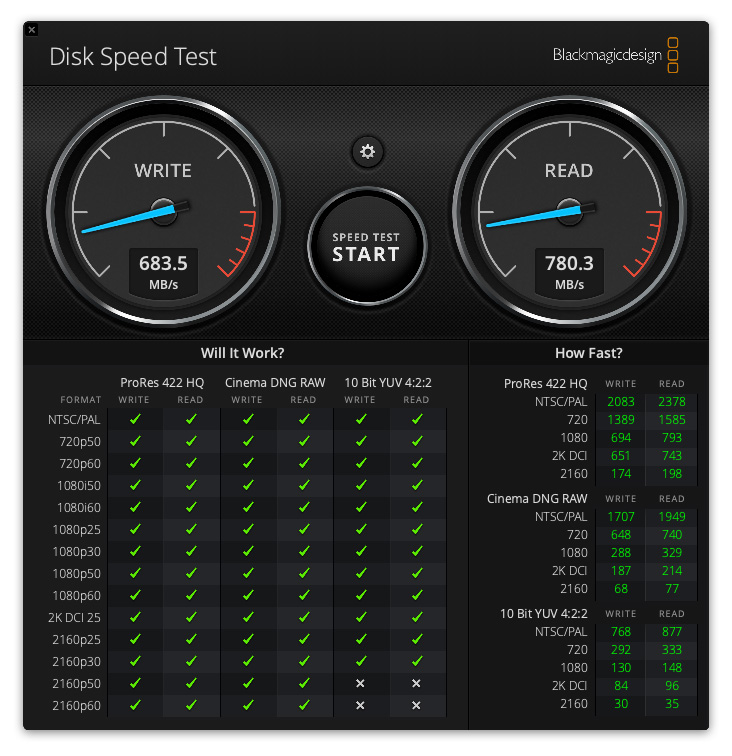 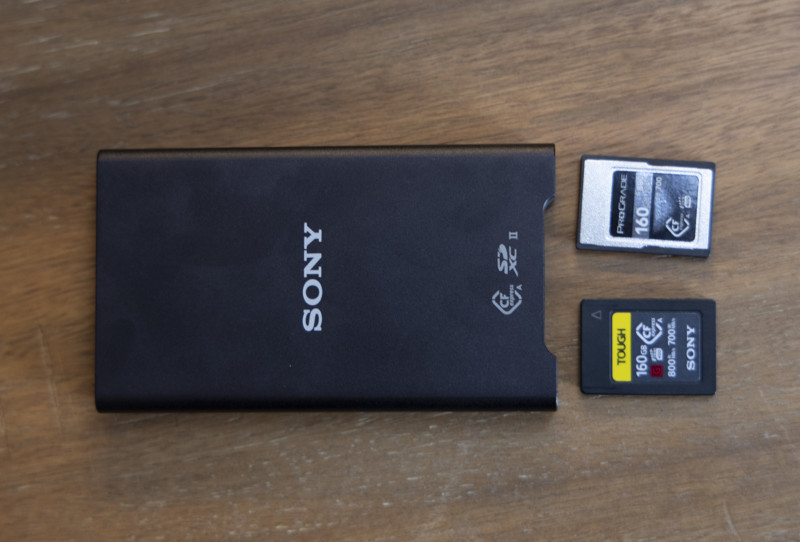 Next, I ran both cards through the Sony combination CFexpress and SD card reader: 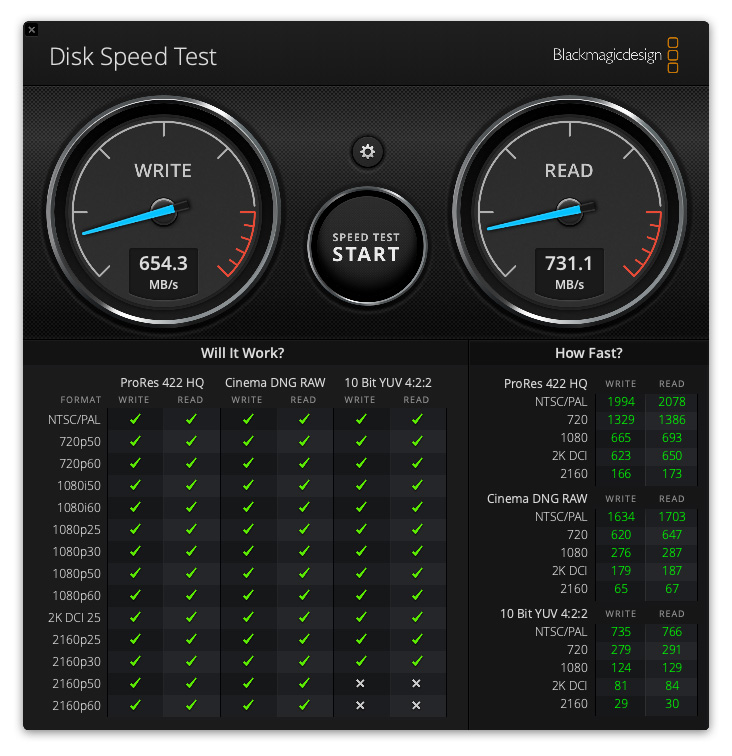 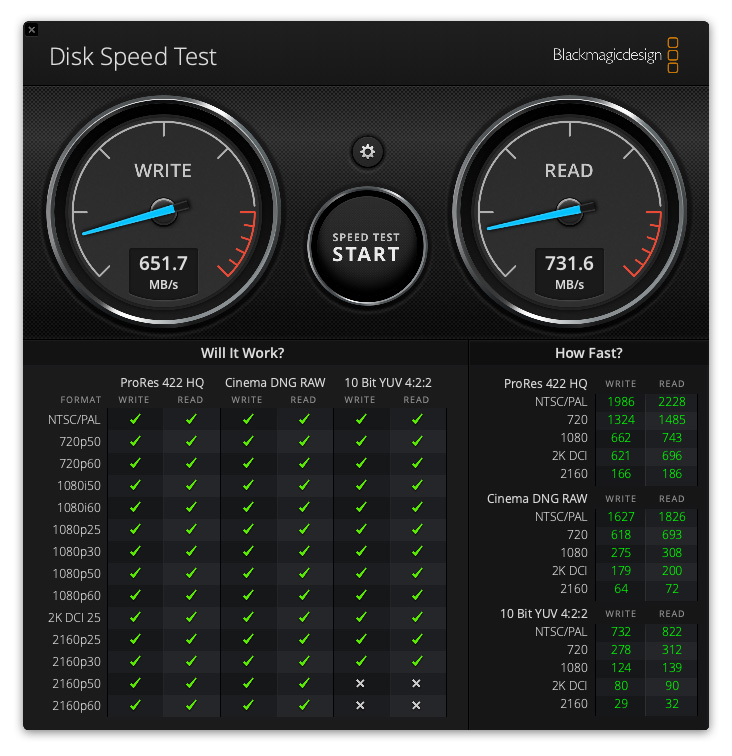 As far as I am concerned, this confirms that the cards should effectively perform identically across mediums and cameras.

Curiously, both the ProGrade card and the Sony card performed worse through Sony’s reader than through ProGrade’s reader by a factor of nearly 20 MB/s in both read and write, which is more than I feel comfortable attributing to just a margin of error. I am not familiar with the inner workings of card readers and what might make one perform better than the other, but in my testing, ProGrade does take the win here as far as media readers.

Hunt the Best Price, Not the Brand

If you were afraid that the $70 discount in price between the Sony and the ProGrade cards would result in worse performance for ProGrade, I have good news: both cards should perform pretty much exactly the same. 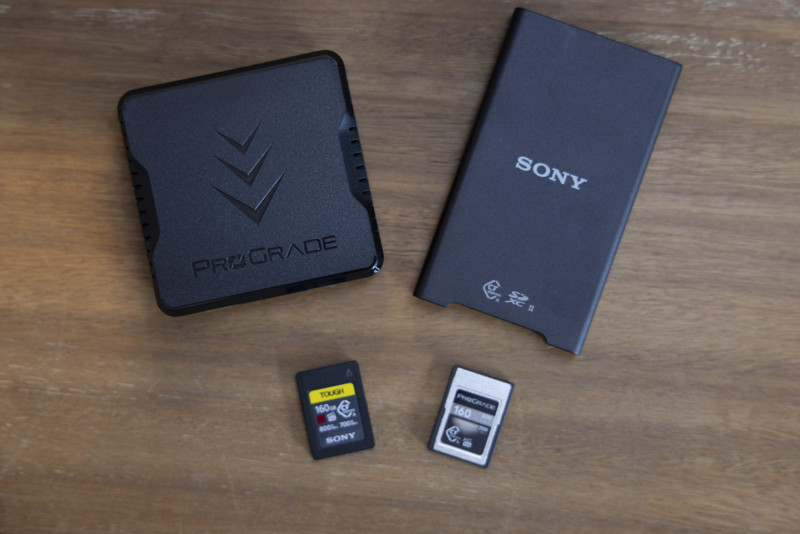 One thing worth noting though is that as far as card readers go, ProGrade Digital’s CFexpress Type A and SD card combo reader appears to be a bit better than the Sony MRW-G2 Cfexpress Type A reader. Sony’s reader is also $120, while ProGrade’s is $80. So while I can comfortably recommend you can buy either the Sony or ProGrade card (whichever is on sale) and get the same performance, it appears the ProGrade card reader will give you better performance, albeit just a little.

That said, ProGrade’s reader is made of mostly plastic while Sony’s is an all-metal housing. I haven’t ever encountered a situation where I needed my card reader to be tough as nails, but if that’s important to you, Sony is likely the better choice even if it’s just a hair slower.