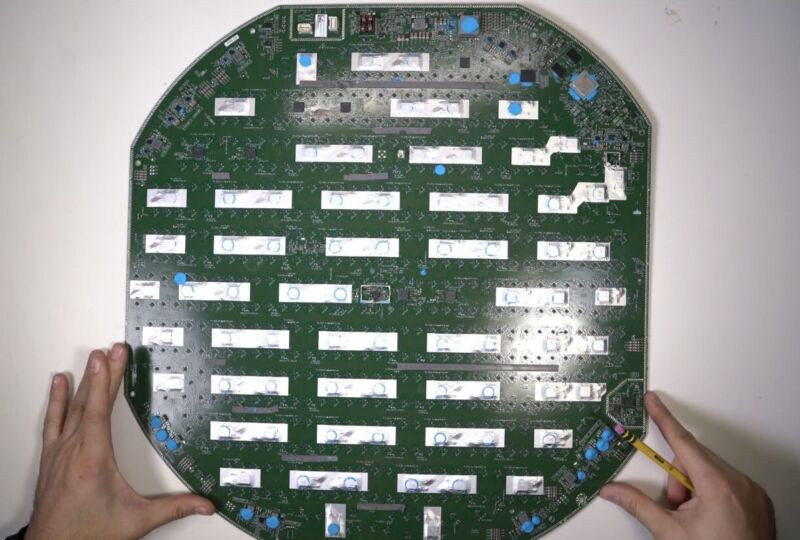 If you ordered Starlink broadband service and don’t receive your “Dishy McFlatface” satellite dish any time soon, the global chip shortage may be one reason why.

“Silicon shortages have delayed production which has impacted our ability to fulfill orders. Please visit your Account page for the most recent estimate on when you can expect your order to be fulfilled,” SpaceX said in an FAQ on the Starlink support website. The language was added to the Starlink website on Thursday night, according to a PCMag article.

Starlink has apparently just exited its beta status. SpaceX CEO Elon Musk said in September that it would emerge from beta in October, and the word “beta” was deleted from descriptions on the Starlink homepage late last week. The website was also updated to advertise “download speeds between 100Mbps and 200Mbps and latency as low as 20ms in most locations,” an improvement over the previously stated “50Mbps to 150Mbps and latency from 20ms to 40ms in most locations.”

But the move from beta to general availability doesn’t necessarily coincide with widespread availability. PCMag also pointed out that expected shipment times for Starlink have been pushed to late 2022 or early 2023 in additional parts of the US. The Starlink website reports expected service times of “early to mid 2022” in other areas.

“My account still says mid to late 2021 for me but I went to the home page and put my address in as if I were to order again and it now says late 2022 there,” one Reddit user wrote on the Starlink subreddit last week.

according to SpaceNews. Given SpaceX’s newer statement on the chip shortage, it isn’t clear what the current production rate is for new user terminals.

Musk seems confident that the chip shortage will be solved, saying it is a “short-term” problem. “There’s a lot of chip fabrication plants that are being built and I think we will have good capacity by next year,” Musk said at a tech event, according to a CNBC article on September 24.

In May, Musk said that SpaceX had received over 500,000 Starlink orders and that SpaceX would “most likely” be able to fulfill all of them. “Only limitation is high density of users in urban areas,” he wrote in a tweet at the time. “Most likely, all of the initial 500k will receive service. More of a challenge when we get into the several million user range.”

If the chip shortage doesn’t dramatically curtail satellite-dish production for an extended time, Starlink’s rapid pace of satellite launches should eventually make it easier to get service. “If you are placing an order in an area where we don’t have coverage or capacity, you will see an estimated service date on the order page… Orders will be fulfilled on a first-come, first-served basis in each area,” the Starlink FAQ says. “We will be able to accommodate more users per area over time as we increase the number of satellites in orbit.”