Glowing Worms Could Shed Light On the Secrets of Regeneration 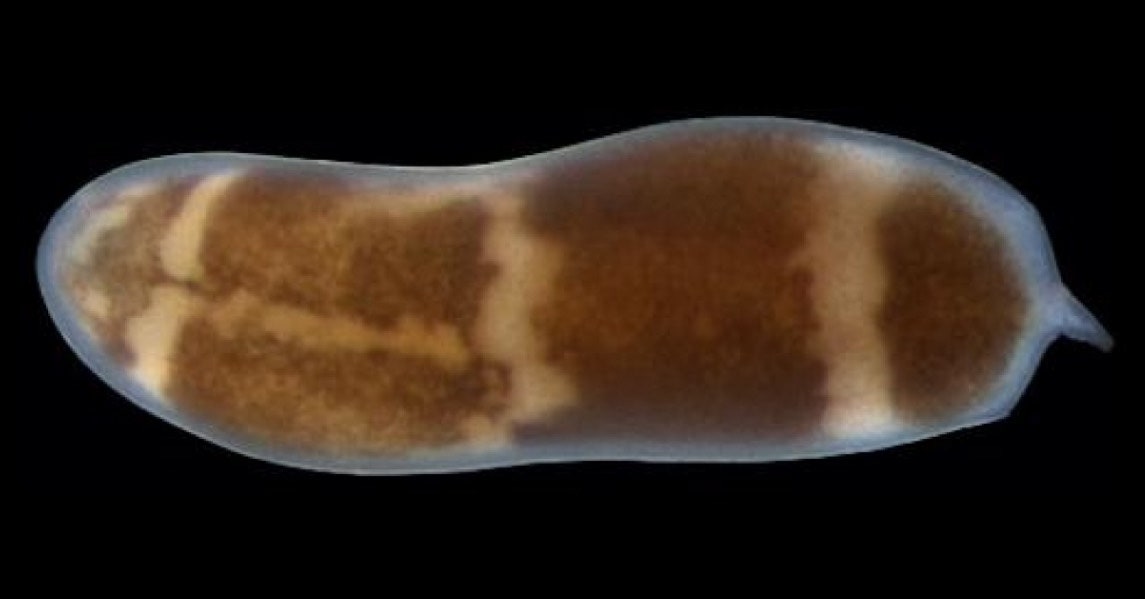 In 1961, Osamu Shimomura and Frank Johnson isolated a protein from jellyfish that glow green under UV light. Corals, too, can fluoresce in a wide range of hues, thanks to similar proteins. Now scientists at Harvard University have genetically modified the three-banded panther worm to enable the creature to emit a similar green glow, according to a new paper published in the journal Developmental Cell. Their hope is to uncover the secrets to regeneration.

Most animals exhibit some form of regeneration: regrowing hair, for instance, or knitting a fractured bone back together. But some creatures are capable of particularly amazing regenerative feats, and studying the mechanisms by which they accomplish these could have important implications for human aging. If a salamander loses a leg, the limb will grow back, for example, while some geckos can detach their tails as a distraction to evade predators and then regrow them later. The zebra fish can regrow a lost or damaged fin, as well as repairing a damaged heart, retina, pancreas, brain, or spinal cord. Cut a planarian flatworm, a jellyfish, or a sea anemone in half, and it will regenerate its entire body.

And then there is the three-banded panther worm (Hofstenia miamia), a tiny creature that looks a bit like a plump grain of rice, so named because of its trademark trio of cream-colored stripes across its body. If a panther worm is cut into three parts, each part will generate into a fully formed worm within eight weeks or so. These worms are found primarily in the Caribbean, Bahamas, and Bermuda, as well as Japan, and they are voracious predators, not above taking a few bites out of their fellow panther worms if they’re hungry enough and can’t find other prey. They also offer a promising new model for studying the mechanics of regeneration.

Coauthor Mansi Srivastava, an evolutionary biologist at Harvard University, has been studying the three-banded panther worm since 2010, when she was a postdoc scholar in Peter Reddien’s lab at MIT’s Whitehead Institute. They collected 120 or so of the worms in Bermuda and brought them back to Cambridge. The worms did not immediately adapt to laboratory life: Srivastava and Reddien had to figure out the correct salinity levels for their water and find an acceptable food source. The worms didn’t care for the liver Reddien had been feeding his planarian flatworms, and a few resorted to cannibalism to survive. Eventually, the researchers figured out that the panther worms loved brine shrimp (aka sea monkeys), and the creatures finally began to thrive and breed.

A report in 1960 had claimed that the worms could regrow their severed heads, but there was little scientific follow-up. Reddien and Srivastava’s early experiments proved that the panther worms could not only regrow their heads, they could regenerate pretty much any body part, just like the planarian flatworms—even though the two are only distantly related. Srivastava now runs her own laboratory at Harvard studying regeneration in panther worms.

In 2019, Srivastava and her lab released the full genome sequence of the panther worm, as well as their identification of a number of “DNA switches” that appear to control the genes for whole-body regeneration. Specifically, they pinpointed a section of noncoding DNA that controls whether a kind of “master control gene” for regeneration, known as early growth response (EGR), is activated. EGR can, in turn, switch other genes involved in various processes on or off. If EGR isn’t activated, regeneration in the worms can’t occur.