Crypto Twitter nonfungible token (NFT) influencers have been relatively quiet over the past two weeks as trading volumes on OpenSea dropped to a three-month low and analysts critical of the emerging sector say a bear market is at hand.

While overall sale volumes do pale in comparison to previous months, certain projects have seen a significant surge in the last week.

Data from Dune Analytics shows that on Nov. 14, the daily amount of Ether (ETH) traded on OpenSea catapulted from $48 million to $105 million and at the time of writing, $63.1 million in Ether has been traded. 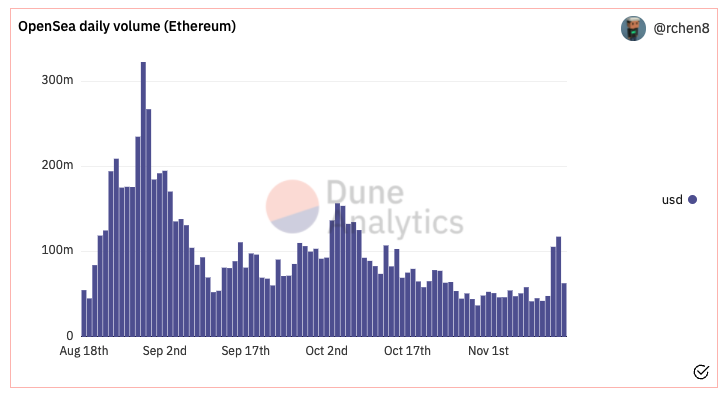 The surge appears to be connected with a more than 900% uptick in the sell volume of Bored Ape Yacht Club (BAYC) NFTs and associated projects like Mutant Ape Yacht Club also saw a volume rise in excess of 1,000%.

Recent purchases by celebrities like Jimmy Fallon, the launch of 2,500 limited-edition Rolling Stone magazines with a Bored Ape featured on the cover and the announcement that Universal Music Group would form a Metaverse-based band called Kingship are likely reasons behind the growing interest in the project.

Additional bullish news emerged on Nov. 12 after Timbaland, a multiple Grammy Award winner and well-known music producer announced that his newly launched Ape-In Productions studio would use BAYC NFT avatars in the creation of music and animations in various aspects of the emerging Metaverse.

It’s often said that imitation is the sincerest form of flattery and as of Nov. 15, this appears to be true in the NFT market. A newly launched project called the Lil Baby Ape club (LBAC) is currently seeing massive sell volume on Opensea with 1,417 Ether in volume, reflecting a 207,344% surge over the past 24-hrs and a floor price at 0.438 Ether.

The Baby Ape’s launched on Nov. 15 with a mint price at 0.02 Ether ($94) and they take after the likeness of the original BAYC project. The current volumes and average sale price at $2,200 are clear signs that the project is popular among collectors, flippers and speculators.

To think these Lil Baby Apes went for 0.02 mint yesterday to this… crazy.

Even crazier the guys who claimed for free when LBAC launched. First 200 mints were for free! https://t.co/jTvN6xtOFn

The dynamic of ultra rare, gold-skinned and lazer-eyed apes being sought after by collectors also appears to be present in the LBAC project and earlier today a suited, gold-skinned LBAC sold for 7 Ether ($33,000).

While the LBAC project is putting up some impressive numbers shortly after minting, it will be interesting to see whether the current hype is purely driven by short term speculation and flippers, or if NFT influencers and notable collectors open their arms to the project in a way that gives it a status similar to other blue-chip projects in space.

Bored Ape Yacht Club is not a public domain project under Creative Commons (CCO), so similar to Larva Labs’ recent beef with CryptoPhunks, it’s possible that the BAYC community could petition OpenSea to delist the Lil Baby Ape Club project.