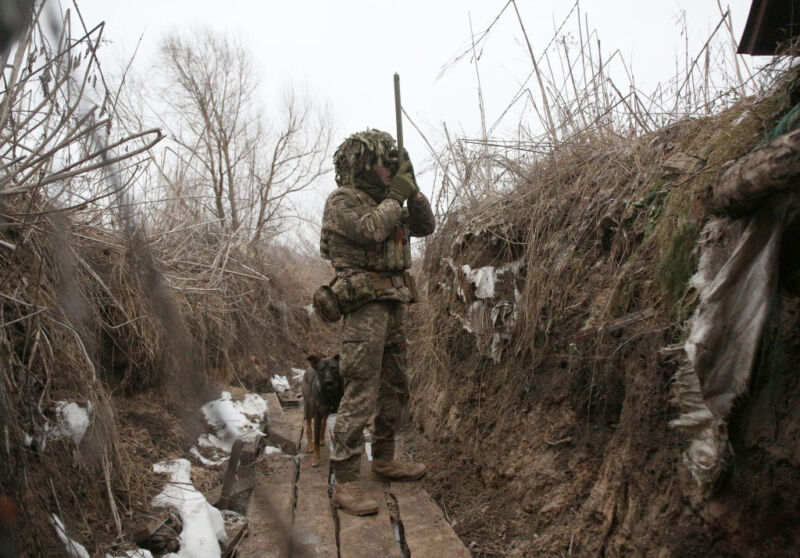 Enlarge / A Ukrainian Military Forces serviceman watches through a spyglass in a trench on the frontline with Russia-backed separatists near Avdiivka, southeastern Ukraine, on January 9, 2022.
Anatolii Stepanov | Getty Images

Ukraine said it was the target of a “massive cyber attack” after about 70 government websites ceased functioning.

On Friday morning targets included websites of the ministerial cabinet, the foreign, education, agriculture, emergency, energy, veterans affairs, and environment ministries. Also out of service were the websites of the state treasury and the Diia electronic public services platform, where vaccination certificates and electronic passports are stored.

“Ukrainians! All your personal data has been uploaded to the public network,” read a message temporarily posted on the foreign ministry’s website. “All data on your computer is being erased and won’t be recoverable. All information about you has become public, fear and expect the worst.”

Viktor Zhora, deputy head of Ukraine’s state agency in charge of special communication and information protection, told journalists on Friday that it was “the most powerful attack in four years” with about 70 central and regional government websites taken down.

“I want to note that as a result of the attack on the sites, the personal data of Ukrainians have not been distorted in any way, important data has not been leaked, the site’s content has not been damaged, and some sites have been forcibly shut down,” he said.

“As soon as we make sure that there are no third parties in the system, there is no malicious code and we will gather all the necessary evidence, the work of these sites will be restored,” Zhora said.

The incident follows tense negotiations this week between the US, Nato, and Western allies and Russia, aimed at deterring Russian President Vladimir Putin from opting for a deeper invasion of Ukraine. Moscow annexed the Ukrainian peninsula of Crimea in 2014.

Ukrainian officials have recently warned that cyber attacks and other efforts to destabilize the country would be a prelude to further aggression. Authorities, however, have not assigned blame for the Friday onslaught.

“As a result of a massive cyber attack, the websites of the Ministry of Foreign Affairs and a number of other government agencies are temporarily down,” Ukraine’s foreign ministry said. “Our specialists are already working on restoring the work of IT systems, and the cyber police opened an investigation.”

© 2022 The Financial Times Ltd. All rights reserved Not to be redistributed, copied, or modified in any way.