Bitcoin miners’ resilience to geopolitics — A healthy sign for the network

Considering that Bitcoin (BTC) is a blockchain network that uses a proof-of-work (PoW) consensus mechanism, miners are a highly significant part of the market dynamics of the network and the community itself. On Jan. 5, it was revealed that Kazakhstan shut down its internet services due to unprecedented political unrest sparked by rising fuel prices in the country.

The protests in Kazakhstan began on Jan. 2 in the town of Zhanaozen to fight against the government doubling the price of liquefied petroleum gas (LPG), which is widely used as car fuel in the country. This change in pricing came as a result of the gradual transition to the use of electronic trading of LPG in order to abolish the existing state subsidies for fuel and allow the market to discover the price of the asset.

However, protests in the region soon snowballed, gaining more momentum and continued despite the country’s government announcing that the prices of LPG would be brought down to a level lower than before the increase. Soon, this led to the country’s presiding cabinet resigning and the state-owned telecom company, Kazakhtelecom, shutting off the country’s internet services. Network data provider Netblocks reported that the normalized network connectivity fell down to 2%, with the government attempting to limit coverage on the escalating anti-government protests.

As a result, the Bitcoin network’s mining hash rate declined over 13% in the hours after the shutdown in the country from 205,000 petahash per second (PH/s) to 177,330 PH/s. Over the past year, the country grew to account for 18% of Bitcoin’s mining activity. A report from the Data Center Industry & Blockchain Association of Kazakhstan estimated that cryptocurrency mining would bring in $1.5 billion in revenue for the country in the next five years.

This is not the first time that Bitcoin mining in the region has received the spotlight. Despite being an energy-rich country, the Kazakh government announced last year that it planned to crack down on unregistered miners that were straining the country’s energy supply after the mining migration from China.

The Central Asian country became a hub for Bitcoin mining after the Chinese government banned mining operations and cryptocurrency services in 2021. This led to the migration of mining companies like BIT Mining to relocate their operations from China to Kazakhstan. BIT Mining is one of the largest BTC mining companies in the world.

The mining company has indicated that it is unlikely to flee Kazakhstan to relocate to North America amid the political upheaval. The firm is closely monitoring and evaluating the situation in order to decide its next move with respect to mining. 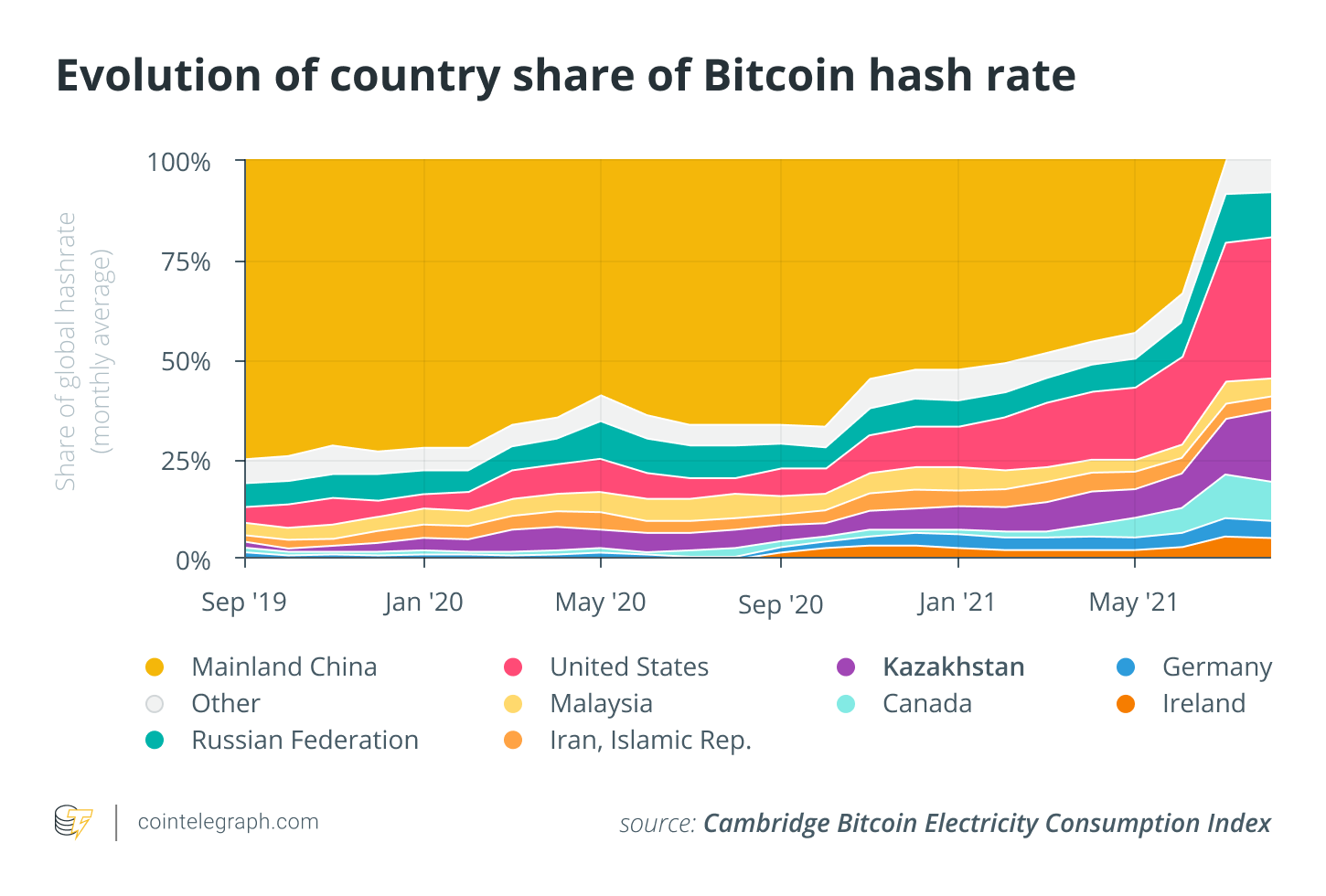 However, countries like Spain have had their eyes on Kazakhstan’s mining market share. The Deputy for the Spanish Ciudadanos political party, María Muñoz, proposed to make the country a mining hotspot amid the current situation, stating in a tweet, “The protests in Kazakhstan have repercussions all around the world but also for Bitcoin. We propose that Spain positions itself as a safe destination for investments in cryptocurrencies to develop a flexible, efficient, and safe sector.”

“Bitcoin mining will continue to grow and the need for viable locations will always be necessary. Countries with the foresight to make themselves Bitcoin-friendly will stand to do quite well as Bitcoin continues to establish itself as a legitimate alternative to fiat.”

As a result of China’s mining ban, the mining dynamics have shifted globally, with the United States leading the charge with over a third of the mining rate. Chang said that one benefit of this migration includes rehomed miners’ shift to a larger mix of carbon-free energy sources.

Additionally, some of the hash rates has gone to more transparent entities operating the mining machines, leading to increased security for the network and a higher level of public trust in Bitcoin miners.

Illia Polosukhin, the co-founder of the NEAR Protocol, a decentralized development platform, told Cointelegraph that in addition to China’s ban leading to a loss of investment, the loss of talent is another major factor:

“Chinese citizens living on the mainland and abroad are banned from working in the crypto sector, and that’s a big loss for the blockchain industry as a whole. It will stifle innovation and, eventually, leave Chinese citizens behind as more users begin to adopt Open Web technologies. It’s possible that more mining operations shifting to the United States could push the issue of blockchain and sustainability more fully into the public eye.”

Thriving amid geopolitical risks is rare for financial assets

The mining hash rate for the Bitcoin network recovered quickly from the drop to 168 million TH/s, according to data from YCharts. In fact, the network has taken a step forward with the hash rate hitting a new all-time high of 215 million TH/s on Jan. 13.

This new all-time high was driven by the statement from ex-Twitter CEO Jack Dorsey, announcing the creation of an open Bitcoin mining system. Thomas Templeton, the general manager of hardware at Square, said, “We want to make mining more distributed and efficient in every way, from buying, to set up, to maintenance, to mining. We’re interested because mining goes far beyond creating new bitcoin. We see it as a long-term need for a future that is fully decentralized and permissionless.” 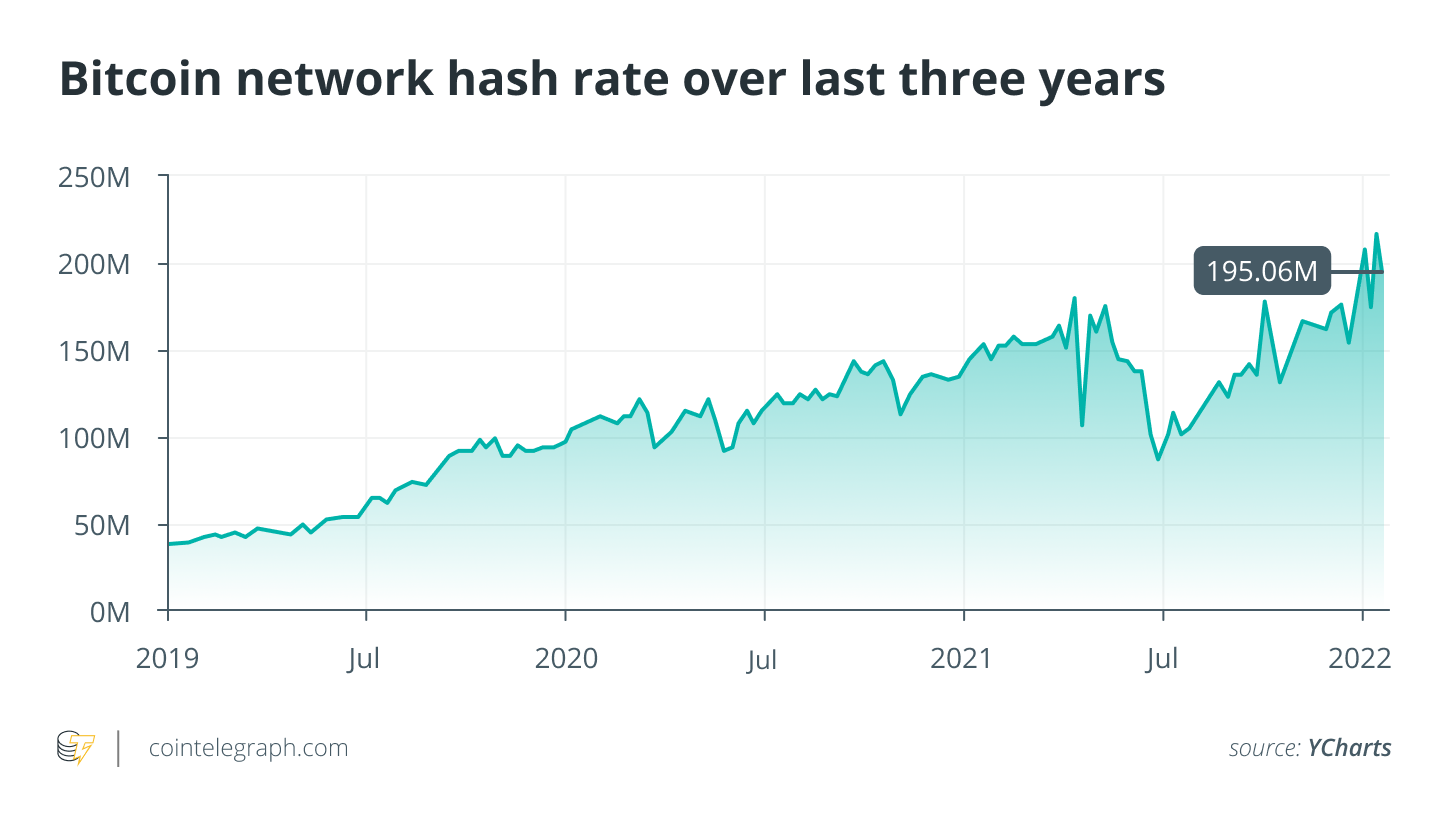 This new all-time high is evidence of how resilient the Bitcoin network and its community are to ensure that the network thrives at all costs.

However, it’s important to remember that such risks are not exclusive to Bitcoin. Chang said, “Geopolitical risk is a common issue for many industries, and Bitcoin mining is not immune. While there will be some that will take the risk and operate in these countries for the sake of lower costs, they do run the risk, such as those experienced in Kazakhstan or others such as the government deciding one day to take all of your machines. Operators will need to understand the risk/reward tradeoff.”

Related: A new intro to Bitcoin: The 9-minute read that could change your life

Polosukhin explained that no matter how distributed or decentralized a blockchain network is — Bitcoin or any other — it’s still intertwined with many legacy systems: energy grids, energy prices, regulation and the laws of nations. Bitcoin mining has either been banned or is facing uncertainty in many countries including Iran, Lebanon, Iceland and Sweden.

Being an energy-intensive PoW network, the Bitcoin network is expected to continue to thrive as long as miners are incentivized economically to continue to remain miners. A report from Fidelity Digital Assets, the crypto wing of Fidelity Investments, indicated that the Bitcoin cycle is far from over, and with the high financial incentives for miners, they are in it for the long haul.

While Bitcoin is in a price slump, currently trading around the $42,000 range with a market capitalization of $791 billion, the fact that miners — the core aspect of the network — have shown resilience to adverse situations over the 13-year history of the network reinforces the belief and trust the community puts on the flagship blockchain network.