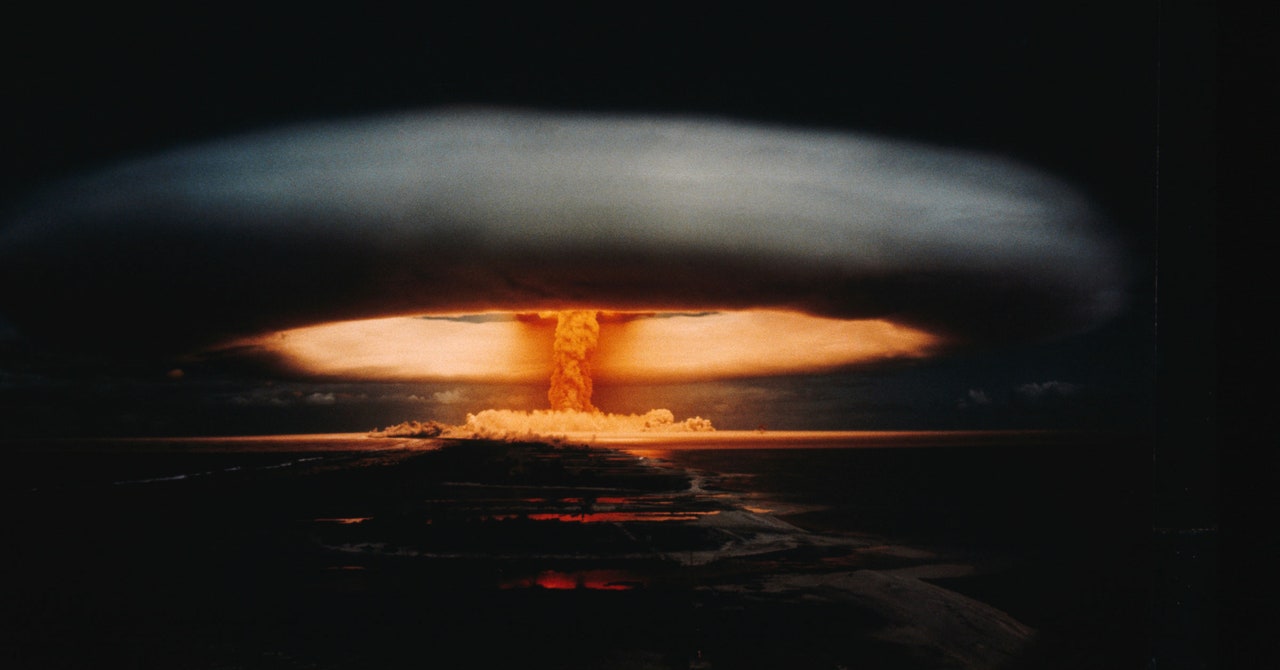 In Stanley Kubrick’s classic 1964 satire Dr. Strangelove, it just takes one errant general in command of nuclear bombers, plus American and Soviet policies of “mutually assured destruction,” to trigger worldwide catastrophe. The darkly hilarious film dwells on risks that remain today, including the possibility of an automated launch system or a single person with access to nuclear codes bringing about a deadly mushroom cloud.

For 75 years, the Doomsday Clock has been drawing attention to risks to human existence. Developed by researchers and policy experts at the Bulletin of the Atomic Scientists, who also started a magazine by that name, the clock started running in 1947, just two years after the United States dropped nuclear bombs on Japan. It’s not literally a clock; it’s a graphic image of one, and it’s a potent symbol for scientific watchdogs and activists. It has had an effect on pop culture too; it’s been referenced by musicians from Sting to the Smashing Pumpkins to Iron Maiden, and in everything from The Watchmen comic books to Doctor Who on TV. Its initial purpose was to highlight the dangers of nuclear war, but that mission was later expanded to encompass other primarily human-made crises that threaten civilization. Initially set at seven minutes till “midnight,” it’s now perilously set at just 100 seconds to midnight, the closest it has ever been to the end of humanity. On Thursday, as Bulletin members celebrate the clock’s 75th anniversary, they will update the time again, when it could tick slightly toward or away from the apocalypse.

“The Doomsday Clock has been called the most iconic piece of graphic art of the 20th century, and I think it’s proving to be as powerful in the 21st. It speaks to the power of the combination of art and science,” says Rachel Bronson, president and CEO of the Bulletin of the Atomic Scientists. To mark the anniversary, Bronson and her colleagues have also compiled a Spotify playlist, made a doomsday-themed drinking guide, and will publish a book by Robert Elder this spring about the clock’s design.

Chicago-based artist Martyl Langsdorf designed the clock in the wake of World War II, working with her husband Alexander Langsdorff, a Manhattan Project physicist, and other researchers who helped get the fledgling Bulletin off the ground. The Doomsday Clock’s experts have the unenviable job of identifying and weighing potential apocalypses, as well as our progress as a society—or lack of it—in avoiding them. They started the clock when nuclear conflicts were on everyone’s minds following the devastation in Hiroshima and Nagasaki, where bombs had killed as many as 210,000 people and injured and sickened many more with cancer-causing radiation. The clock’s minute hand ticked back and forth over the decades, following the development of even more destructive hydrogen bombs, cases of nuclear false alarms, and the 1962 Cuban Missile Crisis, perhaps the most dangerous standoff in history.

The arms race between the United States and the former Soviet Union led to the countries amassing huge arsenals of the most dangerous weapons of war, peaking at around 60,000 of them during the 1980s. Today, there are “only” about 9,000 nuclear weapons left worldwide, but that is still enough to exterminate humanity many times over.

“The nuclear threat has not gone away in any shape or form,” says John Mecklin, editor in chief of the Bulletin. “Use of any significant number of those nuclear weapons would alter civilization in a terrible way. Whether through accident, miscalculation, or terrorist use, the likelihood that there will be nuclear explosions is high enough that our board considers it extremely worrying.”