Play-to-earn (P2E) gaming was one of the hottest sectors in the cryptocurrency market in 2021 and based off the recent moves of Yuga Labs and Bored Ape Yacht Club, the gaming industry could continue to be a winner in 2022.

Axie Infinity was the first game to really capture widespread attention and highlight the possibilities of what P2E had to offer and it is continuing to lead the way in 2022 as the protocol prepares for its next major launch.

Data from Cointelegraph Markets Pro and TradingView shows that the price of AXS increased 56.5% over the past ten days as an increase in its 24-hour trading volume has lifted AXS to a daily high of $69.82 on March 24. 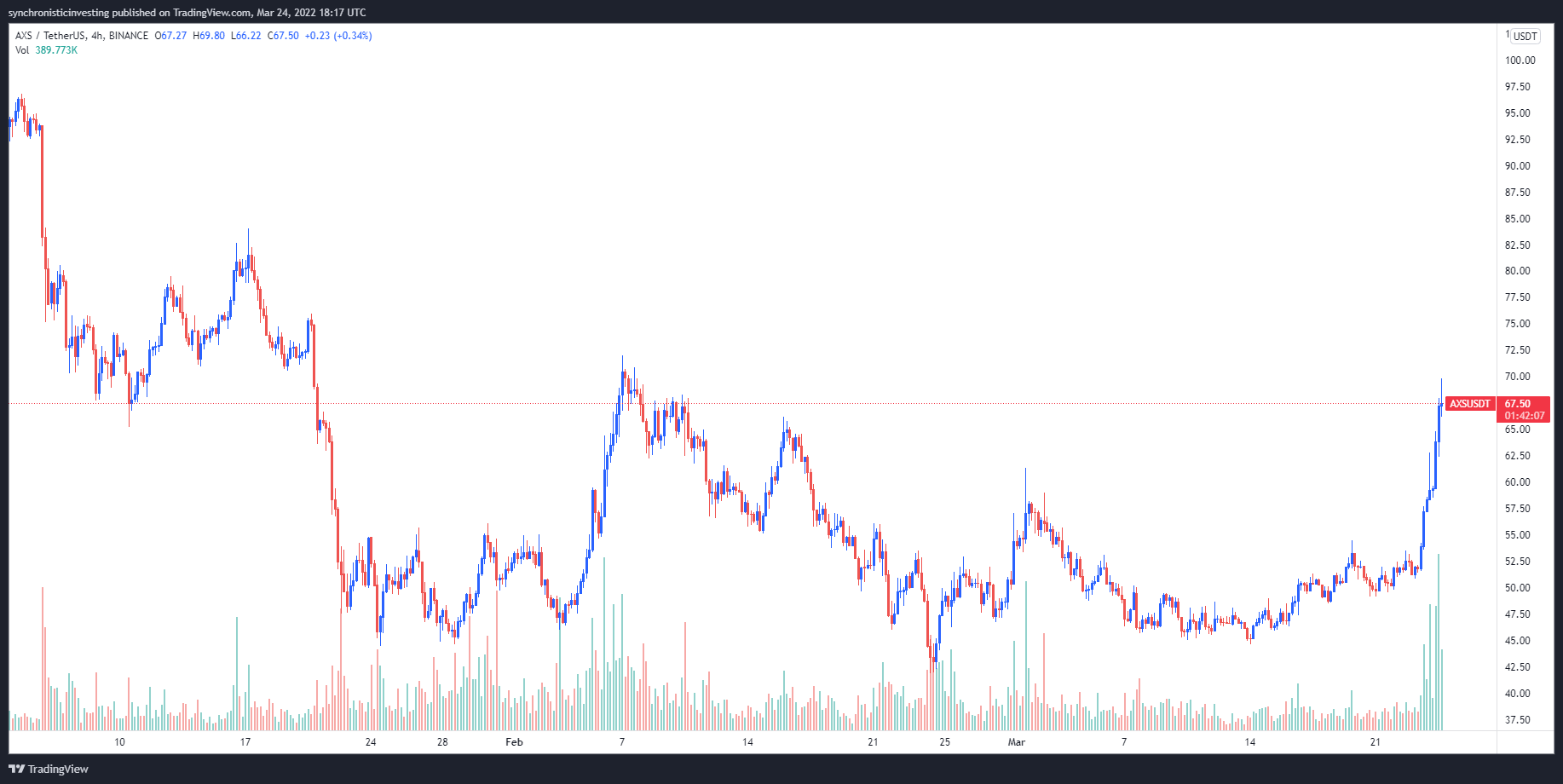 VORTECS™ data from Cointelegraph Markets Pro began to detect a bullish outlook for AXS on March 14, prior to the recent price rise. 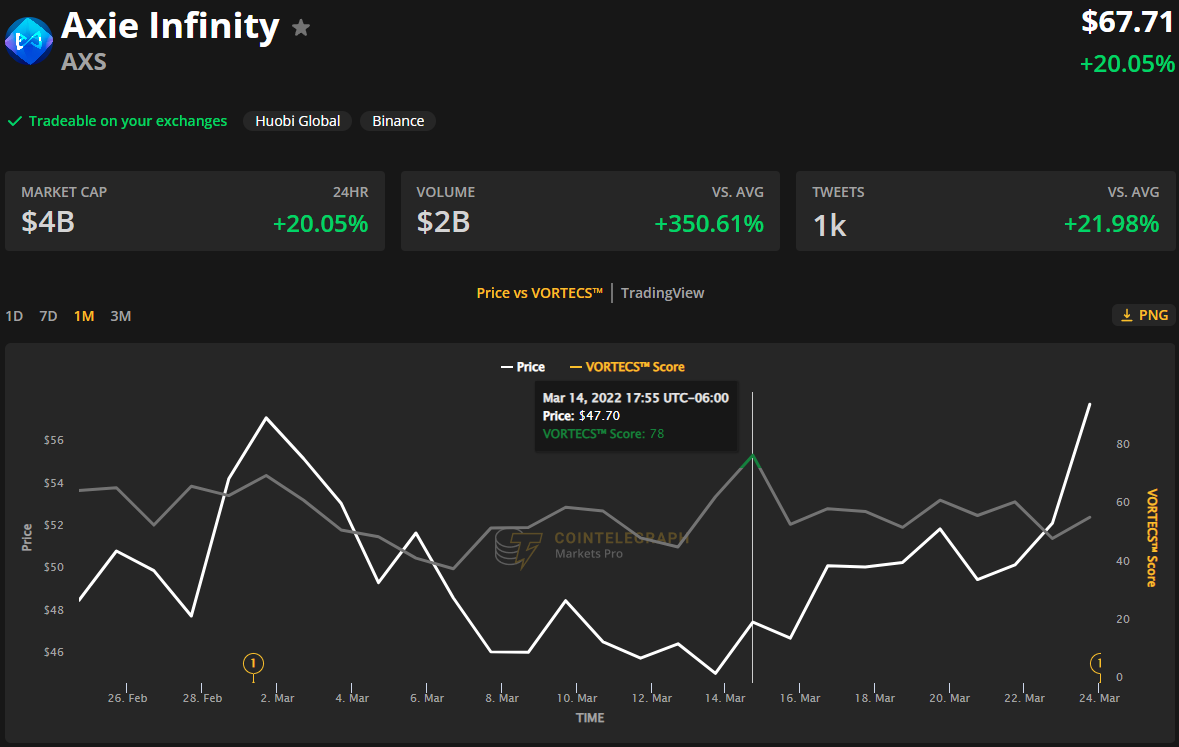 As seen in the chart above, the VORTECS™ Score for AXS climbed into the green on March 14 and hit a high of 78 around 24 hours before the price began to increase 52.32% over the next nine days.

Three reasons for the climbing price of AXS are the upcoming launch of Axie Infinity: Origin, the steady increase of active users and AXS stakers, and the rising popularity of the Ronin sidechain, which enables Axie Infinity gameplay.

The most significant development underway helping to boost the forward outlook for AXS is the upcoming launch of Axie Infinity: Origin, which is expected to take place in the coming weeks.

To clarify, we’re still aiming to get Origin out by end of the month.

It’s cutting close but our engineers are working non-stop to polish and fix bugs.

Shipping a very complex and quality product is hard. Engineers out there may empathize with this. We’re pushing!

According to a recent report from Delphi Digital, Origin is a “completely reimagined version of the popular Axie Battles game that everyone is familiar with.”

Origin will include new game mechanics designed to improve the overall player experience, such as free starter Axies to help attract new players to the game, a reimagined storyline that adds depth to the player experience and the addition of active cards for eye and ear body parts.

The update will also introduce new in-game items like runes and charms, which will act as power-ups for Axies and require players to burn the platform’s native SLP token.

Active users and AXS stakers are on the rise

The rising price of AXS has also been given a boost by the steadily increasing Axie Infinity userbase, which is now at an all-time high of 207,209 total users, according to data from Dune Analytics.

While the pace of new users onboarding into the ecosystem has slowed along with activity in the wider cryptocurrency ecosystem, the increase is still significant and indicates ongoing adoption.

Non-gamers have also been incentivized to hold AXS with a current staking reward of 73% offered through the Axie Infinity platform.

As shown in the graphic above, nearly one-third of the circulating supply of AXS is currently staked on the protocol earning a total daily reward of 50,516 AXS.

Steady growth in the Ronin network

A third factor bringing added momentum to Axie Infinity is the growth taking place on the Ronin network, an Ethereum (ETH) sidechain that was built for Axie Infinity by Sky Mavis is to become the default NFT scaling solution for crypto gaming.

Axie Infinity is currently the only game running on Ronin but that hasn’t stopped the network from consistently ranking in the top 3 in terms of total value locked compared to other Ethereum bridges, with nearly $3.4 billion in value currently locked on Ronin.

That will soon change, however, as Ronin will soon see the introduction of third party developers, which includes “over 1,000 applications from teams wanting to build on Ronin,” according to Delphi Digital.

This has the potential to lead to an influx of new users to the Ronin ecosystem which could also benefit Axie Infinity as new users check out the top-performing project on the network.