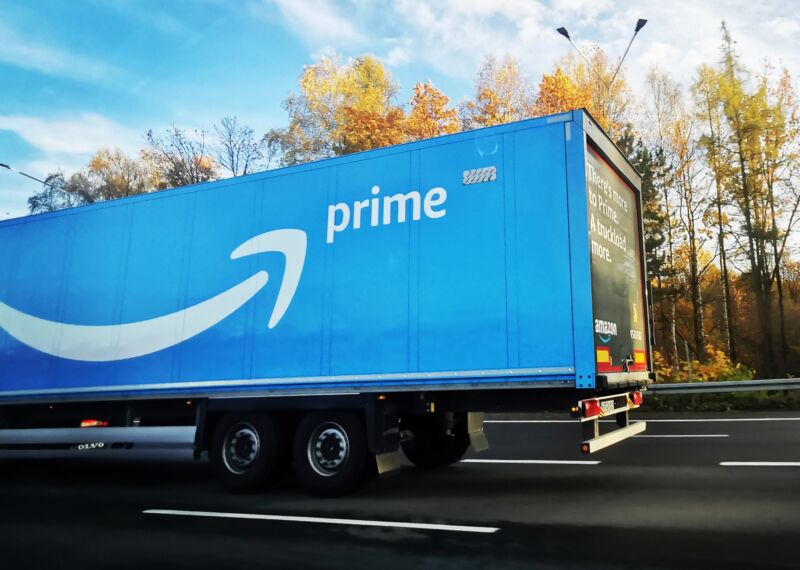 Amazon said it will impose a 5 percent “fuel and inflation surcharge” on third-party sellers who ship through Amazon starting on April 28. The new fee for shipments in the US was detailed on Amazon Seller Central and applies to the Fulfillment by Amazon (FBA) service in which sellers rely on Amazon to store products in its warehouses and ship them to customers.

The 5 percent charge will be applied to fulfillment fees on products shipped on April 28 or later, including products purchased before that date. Amazon also said that this “surcharge is subject to change.” Amazon reportedly told sellers that the “surcharge will apply to all product types.”

In a “notice sent to sellers Wednesday, the company said its costs had gone up since the beginning of the COVID-19 pandemic due to increases in hourly wages, the hiring of workers, and construction of more warehouses,” the Associated Press wrote.

FBA products are eligible for free two-day shipping through Amazon Prime. While Amazon also provides a “Seller Fulfilled Prime” option as an alternative, it is currently “not accepting new registrations.”

Surcharge could go up or down, Amazon suggests

“In 2022, we expected a return to normalcy as COVID-19 restrictions around the world eased, but fuel and inflation have presented further challenges,” Amazon said in the memo to sellers, according to NPR. “It is still unclear if these inflationary costs will go up or down, or for how long they will persist, so rather than a permanent fee change, we will be employing a fuel and inflation surcharge for the first time—a mechanism broadly used across supply chain providers.”

“We absolutely will need to raise prices,” said Molson Hart, whose Viahart Toy Co. sells educational toys and other products on Amazon. “Some sellers cannot because customers are not accepting the new higher prices.”

Hart said he has already had to take lower profit margins on some larger toys that are more expensive to ship because consumers wouldn’t pay the higher prices.

The Consumer Price Index for all items rose “8.5 percent for the 12 months ending in March, the largest 12-month increase since the period ending December 1981,” the US Bureau of Labor Statistics reported Tuesday.

“Corner the market and raise prices”

While Amazon reportedly told sellers that its new surcharge is lower than fuel surcharges charged by UPS and FedEx, Amazon already took a sizable cut of proceeds from FBA sales through a variety of charges. An Institute for Local Self-Reliance (ILSR) report in December said that “Amazon is exploiting its position as a gatekeeper to impose increasingly steep tolls on these businesses. Using a variety of fees, Amazon now pockets a 34 percent cut of the revenue earned by independent sellers on its site, our analysis found. That’s up from 30 percent in 2018 and 19 percent in 2014.”

Amazon previously raised FBA storage fees in February. In January, Amazon increased fees for labeling and package prep and for removal and disposal. “Amazon is raising its fees on sellers… again. This is what monopoly looks like: you corner the market and raise prices,” ILSR Co-Director Stacy Mitchell wrote yesterday in response to the new fee.

Although joining FBA is optional, “Amazon’s algorithms heavily favor sellers who do so, making FBA all but required in order to generate sales on the site,” the ILSR report said. Citing data from Marketplace Pulse, the report said that “84 percent of the top 10,000 sellers on Amazon use FBA.” That number is up to 86 percent now.

Update: Amazon provided Ars with the full text of the memo sent to sellers. Here it is:

Since the start of the pandemic, we have significantly invested in Amazon’s store and fulfillment operations to better support you and our customers. We’ve nearly doubled fulfillment capacity, added over 750,000 full- and part-time roles, and our average hourly wage in the U.S. has climbed from $15 to $18. These investments enabled tremendous growth for sellers, who have increased sales in our store by more than 70% during this time.

Like many, we have experienced significant cost increases and absorbed them, wherever possible, to reduce the impact on our selling partners. When we did increase fees, we were focused on addressing permanent costs and ensuring our fees were competitive with those charged by other service providers. In 2022, we expected a return to normalcy as COVID-19 restrictions around the world eased, but fuel and inflation have presented further challenges. It is still unclear if these inflationary costs will go up or down, or for how long they will persist, so rather than a permanent fee change, we will be employing a fuel and inflation surcharge for the first time—a mechanism broadly used across supply chain providers.

Beginning April 28, we will implement a Fuel and Inflation Surcharge of 5% on top of our current Fulfillment by Amazon (FBA) fulfillment fee per unit rates. We know that changing fees impacts your business, and our teams are working each and every day to ensure FBA remains a great value for the premium fulfillment and delivery service it provides. Since 2020 and inclusive of this change, Amazon has increased fulfillment rates less than other carriers, and continues to cost significantly less than alternatives.

Thank you for your understanding and we look forward to our continued partnership.