Undersea Cables Are the Latest Tools for Earthquake Detection

These very words may have flown through an undersea cable before reaching your eyeballs. Hundreds of thousands of miles of fiber optics crisscross the world’s oceans, shuttling emails, Netflix shows, and news articles as packets of light. And, scientifically speaking, boy does that light have a story to tell—not so much about what happens on land, but what happens in the deep.

Writing last week in the journal Science, researchers described how they used a 3,600-mile cable stretching between Halifax, Canada, and Southport, in the United Kingdom, to detect storms, tides, and earthquakes. Because the cable lies on the seafloor, such perturbations create tiny but measurable disturbances in the fiber optics, changing how the light speeds across the Atlantic Ocean. These changes give a reading of the location of the quake or other disturbance.

This technique—a form of interferometric sensing—is similar to another increasingly popular system among researchers: distributed acoustic sensing, or DAS. Here scientists fire a laser through underground (but unused) telecom fiber-optic cables and analyze what bounces back. If a car or person passes overhead and disturbs the cable, that vibration scatters some light back to its source. Measuring how long it takes the scattered light to travel gives an idea of the size of the object passing overhead. Researchers have also laid cable around Mount Etna, an active volcano in Italy, and used DAS to monitor its rumbles.

This new technique exploits a device in undersea cables called a repeater. (It looks like a slight bulge in the line.) In the map below, those are indicated with yellow dots. “Every 60 to 80 kilometers, usually, you need an optical amplifier, which essentially takes the incoming light and amplifies it,” says Giuseppe Marra, a metrologist at the UK’s National Physical Laboratory and lead author of the new paper. “So they propagate through the next span, and then there is another amplifier, and you keep going like this to get to the other side.” 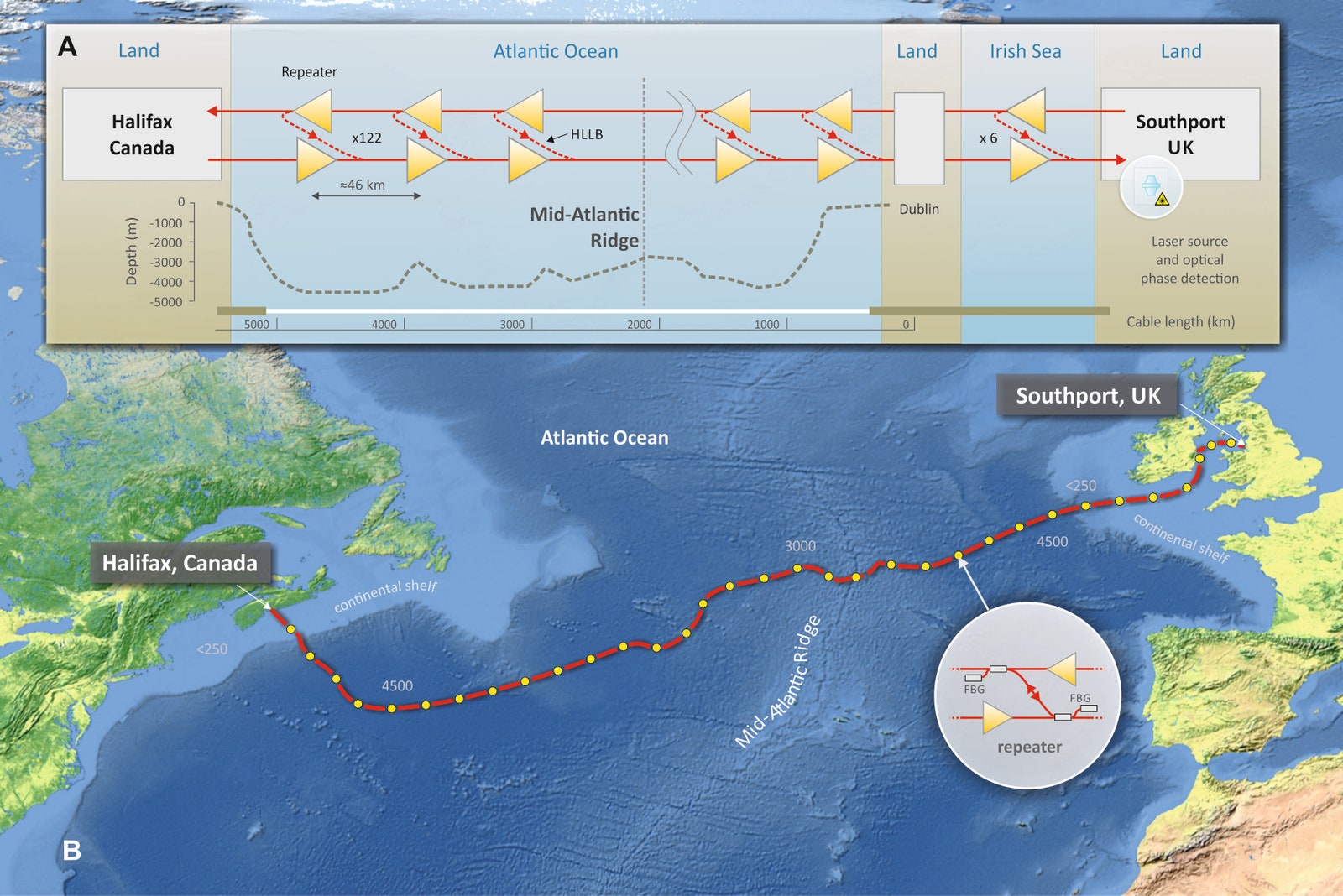 Each repeater boosts the signal to make sure that it reaches its destination without degrading. So Marra and his colleagues could send their own signal through the cable and analyze what it looked like when it arrived at each repeater. Unlike DAS, they’re not trying to parse a perturbation that bounces a tiny amount of light back to its source, but the frequency of the light that reaches the repeaters. “In the case of no perturbation, we get stable signals: The frequency that we receive is the same that we sent,” says Marra. But if there’s been a disturbance, that frequency changes.