The Hempshire Group, Inc. (TSXV:HMPG) continues to aggressively build its global brand, MOUNTAIN Smokes, to de-position tobacco cigarettes & nicotine-based vape markets with a new generation of high quality products for those who want to ‘smoke smarter’.

Despite ongoing efforts from government regulators and health authorities to nix cigarettes and nicotine use, the global nicotine market is continuing to reach new heights.1

What has changed, however, is the method in which smokers get their nicotine fix.

So big tobacco companies are investing like crazy to shed their stigma and grab market share in alternative smoking/tobacco markets worldwide.

That’s why every tobacco giant jumped on the e-cigarette/vaping bandwagon recently.3

Big tobacco companies must see the value in vaping statistics:

But there’s a problem. It turns out vaping isn’t a safer alternative. 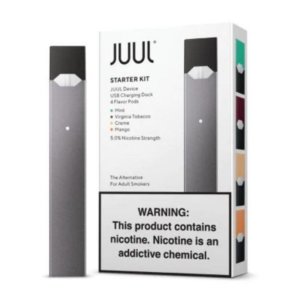 JUUL can contain as much nicotine as a whole pack of cigarettes, which is why they say “Smoking kills. Vaping kills you faster.”6

Not surprisingly, big tobacco companies are already investing in every new alternative on the market.

But what consumers really want, as British American Tobacco stated, are alternatives that “provide stimulation and pleasure, in ways previously associated with cigarettes.”9

Which is why the latest alternative to enter the market – hemp cigarettes – is getting so much attention and for very good reasons:

Influencers are talking up how Hempshire Group’s (TSXV:HMPG) MOUNTAIN Smokes™ hemp smokes are biodegradable and available in a variety of flavors – including the always popular menthol (mint) – which the FDA is fighting tooth and nail to ban in traditional smokes10 and which Canada already banned in tobacco products back in 2017.11 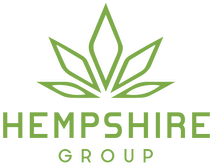 …and recently-listed Hempshire Group, Inc. (TSXV:HMPG) continues to build a global brand to lead this emerging sector with better alternatives for “smarter smokers.”

Investors should keep a close eye on this stock and the news flow as the company ramps up its aggressive marketing campaign and rapid global market expansion in the coming months. 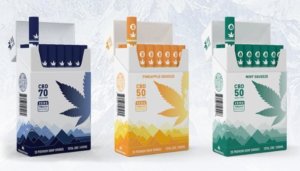 The company has what smarter smokers want: a NO-Tobacco, NO-Nicotine alternative to traditional cigarettes and vapes that offers the same rituals and experiences of traditional smoking but without the tobacco, nicotine or nasty chemicals.

It also has what investors want:
A relatively low valuation compared to its peers, an unmatched product line-up, high margins, and a highly experienced and successful executive team with a plan and the ability to scale fast to meet the growing global demand – by outsmarting the competition, not out-spending them!

AND… with the pending FDA ban on menthol in cigarettes and vapes, and the imminent lowering of nicotine levels in cigarettes, Hempshire Group (TSXV:HMPG)  is poised to step into this vacuum and hopes to capture a share of this $849-billion dollar industry. 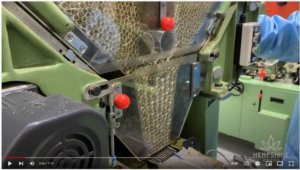 Through its strategic supplier and manufacturing arrangements, Hempshire Group (TSXV:HMPG) can currently produce 1.5 million smokes per day and can quickly scale to meet varying levels of demand at minimal capital cost.

Setting a new standard of quality for hemp smokes is a big deal for Hempshire Group (TSXV:HMPG):

Hempshire Group’s (TSXV:HMPG) premium products are already sold domestically and internationally (dark green areas on the map below), and the company is in distribution discussions with multiple additional jurisdictions (light green areas).

The company’s in distribution discussions with multiple international jurisdictions, including the UK, Europe, Mexico and Brazil (light green areas on the map above). 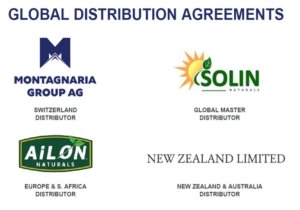 Hempshire Group’s (TSXV:HMPG) ongoing news about their global expansion could make their stock a favorite among investors looking for a ground-floor opportunity in the emerging hemp smokes and tobacco alternatives sector.

Their global expansion is in the capable hands of a group of world-class and highly experienced brand-building and marketing experts (more on that in a moment).

That means investors should expect aggressive press releases of milestones and events, including a lot of potential catalyst news in the near term.

For investors looking to get in on a ground-floor pure-play smokable alternative opportunity, this is one to check out.

Hempshire Group (TSXV:HMPG) Could be a Contender for This Year’s Breakout Smokeable Alternatives Stock

Big Tobacco is looking for alternatives & ripe for disruption: Consumers are transitioning away from traditional nicotine-based smokes to non-nicotine alternatives

Commitment to quality: Fanatical about delivering superior product through end-to-end testing of the best ingredients, packaging and manufacturing

The global nicotine-based markets (tobacco, e-cigs/vapes) and the CBD/cannabis markets have COMBINED annual sales of $880B+:

To put that into perspective, 1% of that combined total market is equivalent to nearly $9 billion in revenue.

But Big Tobacco wants to keep – and grab – the biggest stake of those numbers. So they’re acquiring alternatives to traditional cigarettes as fast as they can as noted in the examples provided above.

The good news for Hempshire Group (TSXV:HMPG) is that, as we already saw, over 70% of Americans view tobacco companies unfavorably.21

That’s a BIG stigma that Hempshire Group (TSXV:HMPG) doesn’t have to overcome.

Better yet, over 70% of Americans ALSO view e-cig and vaping companies and products unfavorably,22 which is all the more reason consumers will be demanding alternatives like HEMPSHIRE’s MOUNTAIN Smokes brand.

It’s important to note that not all hemp cigs are created equal. Other companies – most of which are privately owned – are adding additional, unnamed ingredients to their hemp cig products.

HEMPSHIRE’s MOUNTAIN Smokes is also fully transparent about all its ingredients (only organic full-flower hemp, organic mullein, and organic sage… no additive, no sprayed-on or infused chemicals, no preservatives), and strives to be the best-tasting and highest-quality hemp smokes in the market.

In the case of publicly-traded company TAAT Global Alternatives, the company doesn’t disclose everything in its hemp smokes, which includes a “proprietary blend” of food-grade ingredients.23

Even more important for investors checking out Hempshire Group (TSXV:HMPG) is that it’s newly listed… so unlike the companies it’s working to disrupt, it has potential to grow. 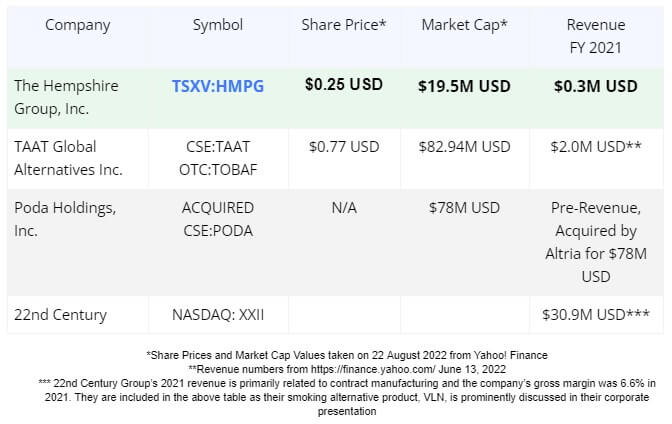 The Hempshire Group (TSXV:HMPG) has multiple differentiators that “smarter smokers” like.

First, its products have only 3 ingredients: organic hemp, organic sage, and organic mullein. There are virtually no other players in the alternate smokes space that have such a pure, natural, and sustainable product. And Hempshire does the necessary end-to-end testing to maintain its reputation for the best hemp smokes on the planet.

Second, The Hempshire Group (TSXV:HMPG) avoids unwanted  factors by making sure all Hempshire products have: 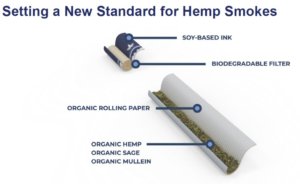 The deeper you dig into their multiple product lines, the more you see how Hempshire Group (TSXV:HMPG) has perfectly positioned themselves to satisfy smarter smokers.

Their MOUNTAIN Smokes are one of the only CBD-rich hemp smokes that only use full flower hemp (no shake, no trim) as its core ingredient, and has less than 0.3% THC, and the only hemp smokes that blend organic mullein and organic sage into the smokes.


Their MOUNTAIN Zeros (sold internationally, and to be introduced in the US in late 2022) have an undetectable <0.0001% THC level for markets that don’t allow THC and for consumers who cannot risk, or do not want to risk testing positive for THC.

Their MOUNTAIN Herbals (in development) have ZERO hemp and instead use proprietary herbal blends that help with focus, relaxation, clarity or sleep.

The MOUNTAIN Herbals line is part of Hempshire Group’s (TSXV:HMPG) first-to-market strategy for countries that don’t allow hemp. With zero hemp, the company can establish their MOUNTAIN brand while waiting for the region’s hemp/CBD regulations to evolve over time.

In other words, Hempshire Group (TSXV:HMPG) has strategically created multiple product lines to meet the desires of smokers seeking tobacco and nicotine alternatives, and maintain compliance with the regulations of the global market.

Hempshire Group already has a serious foot in the door as a global brand.

While sales in the US are almost exclusively online right now, it has plans to expand into American retailers which could be a big catalyst since the company has access to several thousand convenience stores across the country.

International sales are currently coming from Switzerland and South Africa – where Hempshire was the first to introduce legal hemp smokes.

But Hempshire Group (TSXV:HMPG) isn’t slowing down at all. 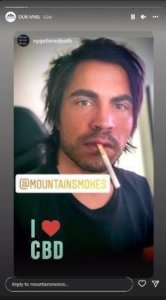 You know a company is resonating with its market when OTHER people are singing its praises… and NOT being compensated to do so!

Then there are close to 1,000 influencers posting images of themselves smoking MOUNTAIN Smokes organically on Instagram and even sharing their smokes with real life connections…again, all without being paid.

These include powerful influencers and celebrities with followings between 50,000 and 20,000,000+, like:

“Free publicity and word of mouth is probably the best and cheapest
form of advertising. Learn to use it to your advantage.”

All that free word-of-mouth advertising isn’t the result of dumb luck.

It’s the result of Hempshire Group’s (TSXV:HMPG) world-class marketing team that knows how to build and market iconic, global brands.

The level of marketing exposure planned for MOUNTAIN Smokes in the hands of proven branding experts could quickly rocket Hempshire Group’s (TSXV:HMPG) number of fans and market share to a whole new level. Add in top tier financial and corporate management, and you have a winning combination.

Hempshire Group (TSXV:HMPG)  has built a blue-ribbon executive team that includes, among others, their Chief Executive Officer, Martin Marion 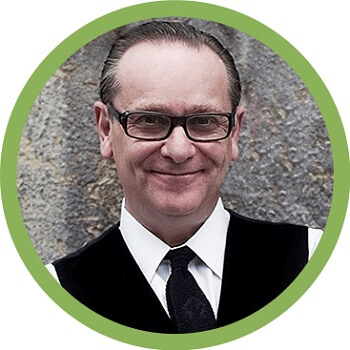 – Over 35 years in executive management and marketing of enterprise-level CPG and health products for some of the world’s largest brands
– Former principal and senior executive of 2 of the world’s largest Madison Avenue ad agencies – think ‘Mad Men’ in the heyday of advertising – for dozens of the largest health and consumer product brands and global agencies
– Consulted to and directed highly successful brand positioning, strategic planning, product launch, and digital marketing programs for agencies and major brands in almost every niche
– Strategic advisor for multiple health brand launches, including Viagra launch strategy for Pfizer, and go-to-market strategies for Glaxo, Merck, Bayer, 3M Pharma, and many others
Another outstanding executive with world-class credentials and experience is Chief Marketing Officer, Eric Starr. Eric is a marketing superstar: 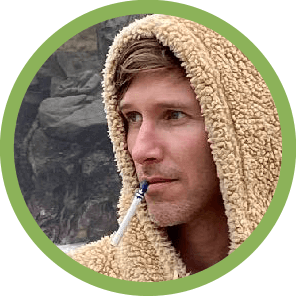 – He worked with Steve Jobs at Apple’s exclusive creative agency, Media Arts Lab, for over 10 years
– He helped create the famous ‘Silhouettes’ campaign that helped launch the iPod; this campaign received the prestigious ‘Out Of Home Ad of the Decade’ from AdWeek 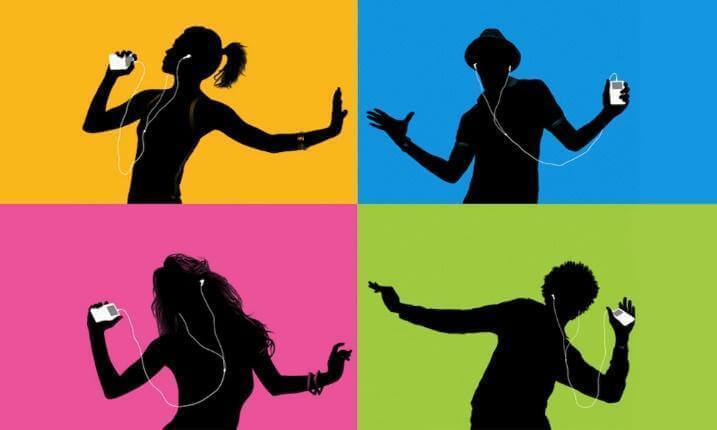 – He helped build the Mac brand, and was integral to the introduction of both the iPhone and iPad
– He’s received impressive honors, including ‘Campaign of the Decade’ for the “I’m a Mac, I’m a PC” campaign and the firm he worked for won ‘Agency of the Decade’
– After Apple, Eric went on to found organic fertilizer company URTH Agriculture, where he discovered his passion for premium grade hemp products and the healing powers of cannabis
– He clearly understands that to successfully build and market successful brands, consumers need to be encountering you everywhere.

“Your brand is a story unfolding across all customer touch points.”
– Jonah Sachs, branding expert 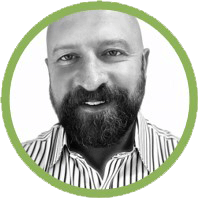 That’s why Hempshire Group (TSXV:HMPG) has such a comprehensive marketing plan (it actually takes up over 17% of their investor presentation).

This includes partnering with WKND Digital, industry-leading creative, eCommerce, advertising and DTC growth experts that have generated thousands of leads and over $400 million in revenue for businesses and clients including Disney, Cheerios, Seiko, Converse, Kodak and Coca-Cola, to name a few.24

The company is going to deploy best-in-class marketing, messaging, and communications programs across all channels that reach their targeted markets… that’s EARNED, OWNED and PAID reach.

…and an idea of the breadth of their Offline / Traditional Marketing Strategy:

Big Tobacco is looking for alternatives & ripe for disruption: Consumers are transitioning away from traditional nicotine-based smokes to non-nicotine alternatives

Commitment to quality: Fanatical about delivering superior product through end-to-end testing of the best ingredients, packaging and manufacturing