Bitcoin (BTC) price posted a 25% gain after this week’s news of Tesla’s $1.5 billion BTC investment came out. Prior to this reveal, BTC was lagging behind Ether’s (ETH) performance by 7.5% but the numerous bullish events of the past few days helped BTC to hit a new all-time high at $48,900.

Previous to Tesla’s announcement, BTC price was trading in the $30,000 to $41,500 range for nearly 3 weeks and once the price broke out one would expect pro traders and arbitrage desks to follow the bullish trend.

Rather than flipping long, many of the top traders opened short positions as BTC commenced its 25% move. This seems risky given that this week Bitcoin received praises from JPMorgan’s co-president and regulators approve a BTC ETF approval in Canada.

Historical data shows that Bitcoin price actions tend to trade in tandem with Ether, which has been strongly bullish for months. Adding to this bullish scenario, Bitcoin’s Lightning Network announced a record node count and the total value locked (TVL) surpassed $42 million.

Mastercard also announced that it would support cryptocurrency payments on its network by the end of 2021.

This indicator is calculated by analyzing the client’s consolidated position on the spot, perpetual and futures contracts and it provides a clearer view of whether professional traders are leaning bullish or bearish.

It is important to note that there are occasional discrepancies in the methodologies between various exchanges, so viewers should monitor changes instead of absolute figures. 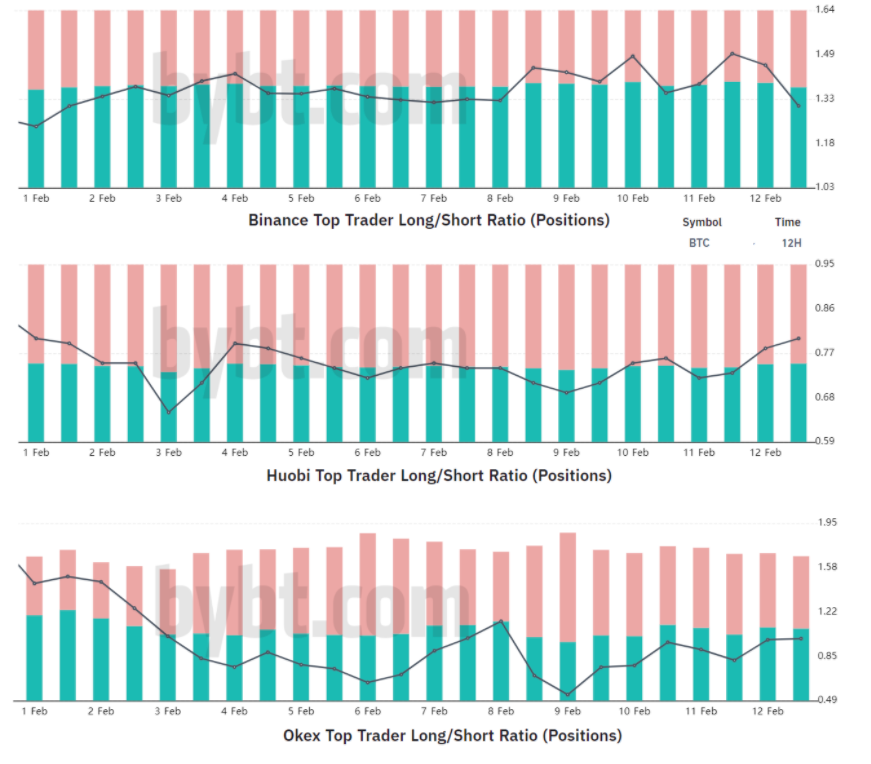 Lastly, OKEx top traders held a 14% net long position before the Tesla news came out. Although they’ve reverted to a 47% net short position on that same day, over the last four days the indicator has come back to 1.03. Currently, OKEx traders remain well below the 52% net long position from two weeks ago.

Staking could be capturing top traders

Top traders could have also moved their BTC off-exchange in search of better yield opportunities. Therefore, assuming that they’ve entered short positions solely by monitoring centralized exchanges’ could be a brash conclusion to reach.

As things currently stand, the long-to-short indicator does not show extreme net long positions from arbitrage desks, market makers, and whales. A balanced derivatives market suggests that there’s ample room for buying activity if BTC continues to rally to $50,000 and above.