To the observant cryptocurrency enthusiast, the sight of multiple large-cap tokens more than tripling their value since November 2020 is a healthy sign that a bull market cycle is underway.

Aside from a breakout in the price of Bitcoin (BTC), Ether (ETH) and altcoins, every bull market in the crypto sector is defined by one or two key themes that emerge as the driving force of market enthusiasm.

In 2016-2017 there were ICOs, the growing popularity of collectibles like CryptoKitties and the widely held belief that blockchain was a solution to every problem in the world.

In 2021 it’s clear that DeFi is one of the primary drivers of the current bull trend in Ether price and altcoins that embraced the sector. While it may not be in the forefront of every analyst’s mind, the development of oracles is another component that is quietly building the essential infrastructure of the crypto market and many of the projects focused on oracle integration have seen their token prices surge in the past 12 months.

Oracles track, record and securely transmit various forms of data, such as price and trading volume, to different blockchain networks and entities that are interested in the data provided.

The need for trusted and reliable data is growing in importance as DeFi continues to expand and the total value locked reaches record highs at many platforms .

In 2020 multiple DeFi protocols were hacked, costing investors millions of dollars as flaws in unaudited code and allowed hackers to have their way with price alterations.

These breaches bring light to the essential tasks of oracle providers, which are to provide reliable, up to the second price discovery data for cryptocurrencies. Having this data come from multiple trusted sources decreases the possibility of manipulation and mass liquidation events like the Harvest Finance exploit where hackers made off with $24 million by manipulating the price of stablecoins on the Curve DAO (CRV) platform.

Making the pricing and data feeds universally consistent or even synchronized is one of the optimal ways to tackle this issue as currently, every oracle is structured differently in how it sources data, comes to a consensus on that data, and how prices are then calculated.

With Bitcoin price continuing to reach for new highs and the DeFi market cap topping $57.45 billion, mainstream investors are becoming much more interested in cryptocurrencies and pricing solutions are needed.

Here are some of the top oracle-focused projects who’s tokens are making strong moves over the past few months.

Chainlink has the first-mover advantage

The most well-known and established oracle project is Chainlink. Arising out of the ICO craze of 2017-2018, the Sergey Nazarov led project initially raised $32 million to develop a decentralized oracle network comprised of node operators who are willing to provide smart contracts with access to external data feeds in return for a reward in the form of the native LINK cryptocurrency. 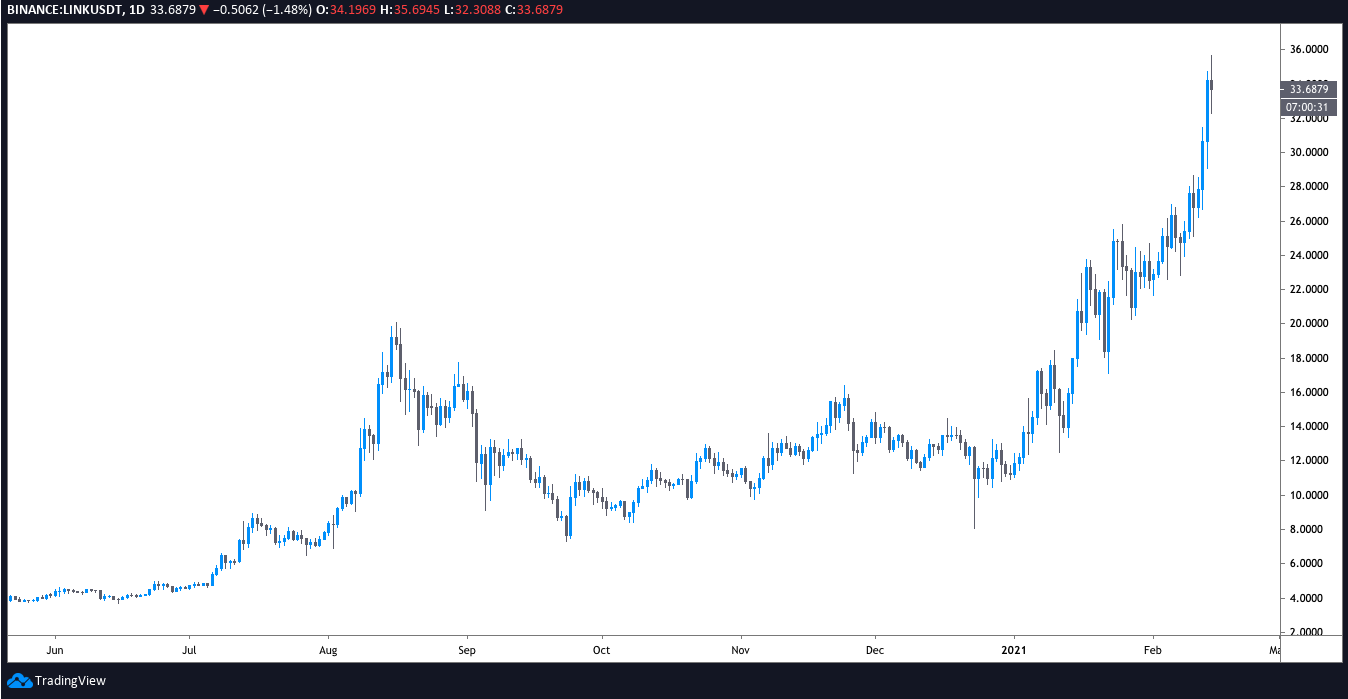 LINK became synonymous with DeFi as many of the price feeds that connect separate blockchains and decentralized exchanges utilize its price oracles for price discovery.

Similar to the Coinbase effect, there was a period of time when just the mention of being integrated with Chainlink would provide a brief period of price appreciation as it was seen as a sign of legitimacy.

On March 16 of 2020, shortly after the global financial markets were rocked by the emergence of COVID-19, LINK traded as low as $1.63 after trading at $4.80 just two days before.

Since that time LINKs price has seen a nearly 15-fold increase to a new all-time high of $35.69 on Jan. 23, thanks in large part to the addition of LINK liquidity pools on Uniswap during the 2020 summer of DeFi.

Band Protocol (BAND) is a cross-chain data oracle that was originally launched as an ERC-20 token in Sep. 2019 but migrated over to the Cosmos network in June of 2020 with the release of Band 2.0.

The project specializes in aggregating real-world data and APIs, the Band protocol then supplies that data to on-chain applications and smart contracts in order to facilitate the exchange of information between on-chain and off-chain data sources. 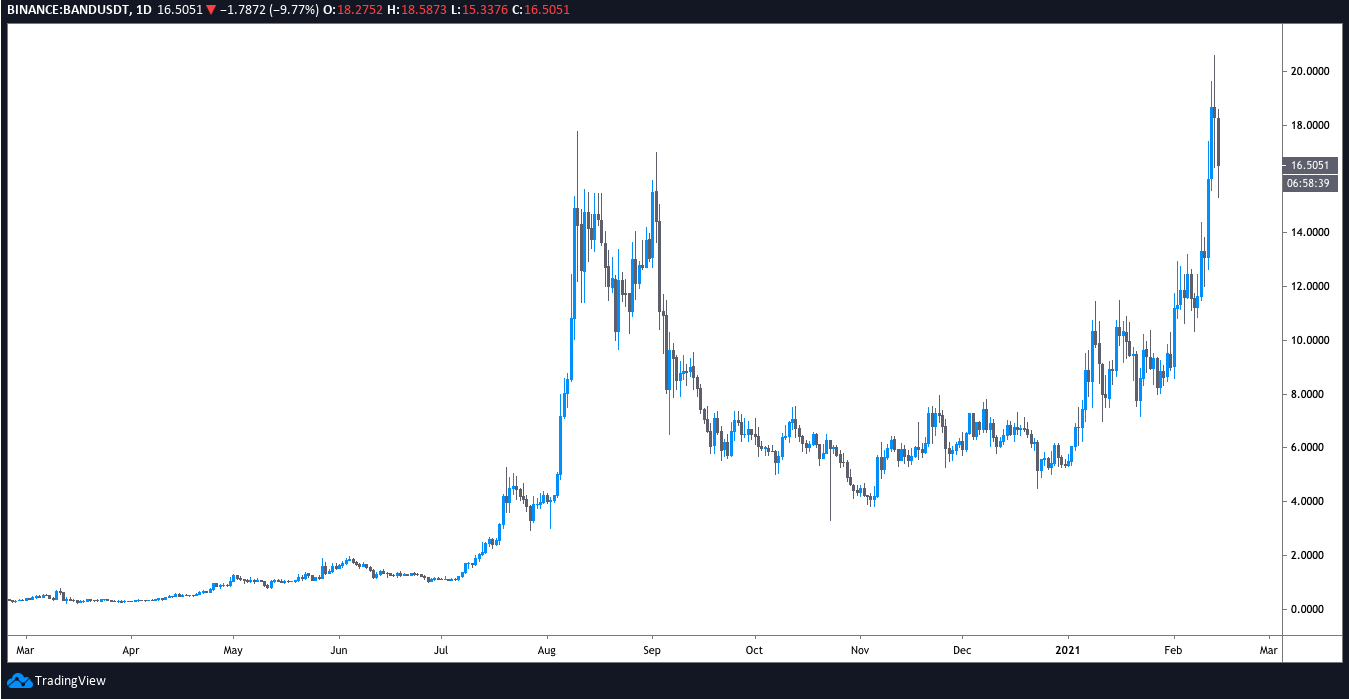 Similar to LINK, BAND token is used as collateral by validators who fulfill data requests and it is the main medium of exchange within the BandChain ecosystem. Oracle nodes on the chain are also involved in the block production/validation process, adding a second role to the important function of relaying data.

In terms of what sets BAND apart from other oracle solutions, that is where the choice to develop on Cosmos came into the equation.

Currently, the team at Cosmos is in the process of developing its Inter Blockchain Communication (IBC) protocol which BAND intends to use for cross-chain data transfers that will support interoperability between blockchains.

Once developed, Band protocol will be able to ensure reliable data feeds on multiple blockchains while also enabling the simple creation of permissionless oracles that allow anyone to begin servicing data requests.

One of the more recent arrivals to the oracle game is API3, which is a DAO-governed project focused on the creation of fully decentralized, blockchain-native APIs (dAPI). These dAPIs aggregate data from first-party oracles which are “operated by some of the world’s premier API providers,” according to API3s homepage.

API3 sees oracles as a form of middleware positioned between APIs and smart contracts, which leads to increased costs and centralization. The project’s solution is to decentralize this process by enabling API providers to operate their own nodes, allowing smart contracts to establish a direct connection with APIs for the latest data.

Investor’s desir to play a role in the governance of blockchain projects has also emerged as one of the hot topics in this current bull market and API3 is aiming to capitalize on this growing trend.

API3 token combined with the API3 DAO gives token holders the ability to participate in the governance of the ecosystem through staking tokens in the data feed insurance pool. In addition to the ability to vote on proposals, stakers have access to weekly staking rewards. 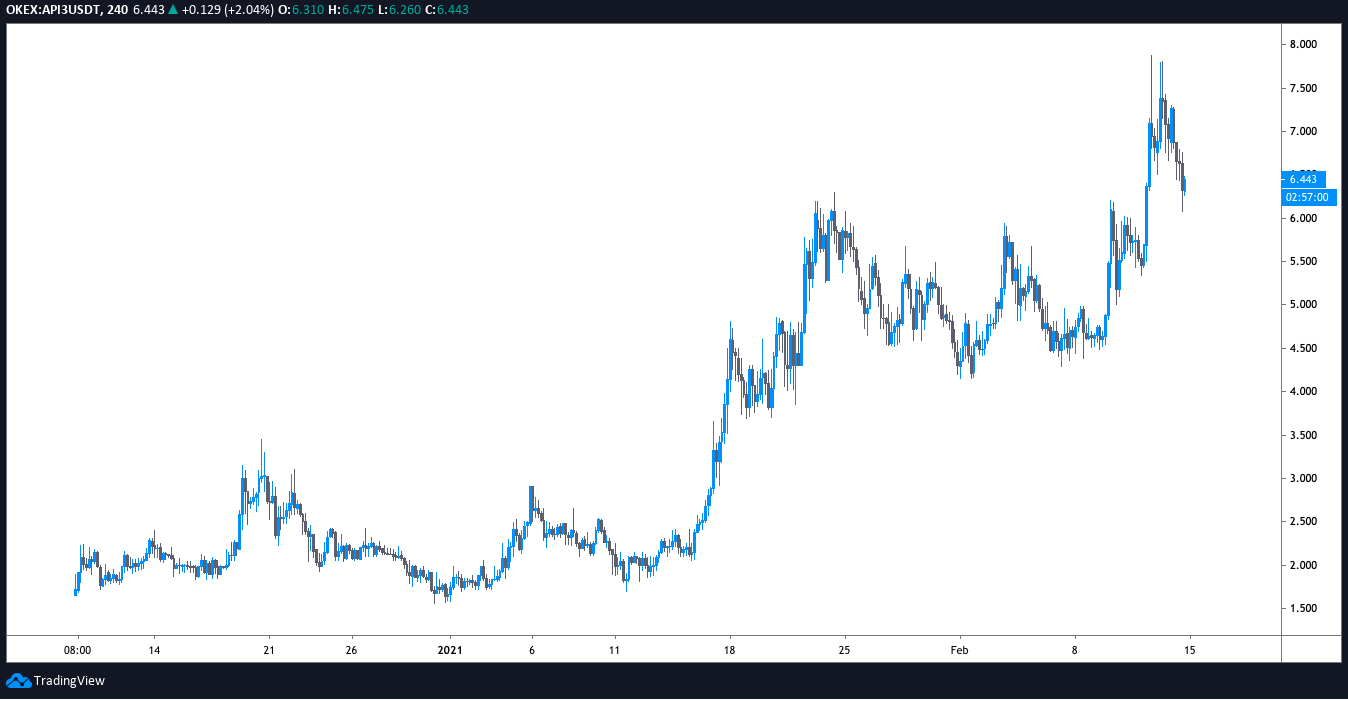 DIA focuses on oracels for DeFi

The DIA (Decentralized Information Asset) platform, which sees itself as an “open-source data and oracle platform for the DeFi ecosystem,” pulls data directly from exchange APIs and other public sources to DIA servers and collectes it in a database which is then hashed on-chain.

DIA data streams are available through oracles or APIs providing DeFi protocols and other data providers with plug and play access.

Eventually DIA token will have staking and governance features that will be used to drive the collection and valiation of data. The overarching goal of the project is to become a trusted source of immutable and verifiable data for any market or asset tied to financial institutions. 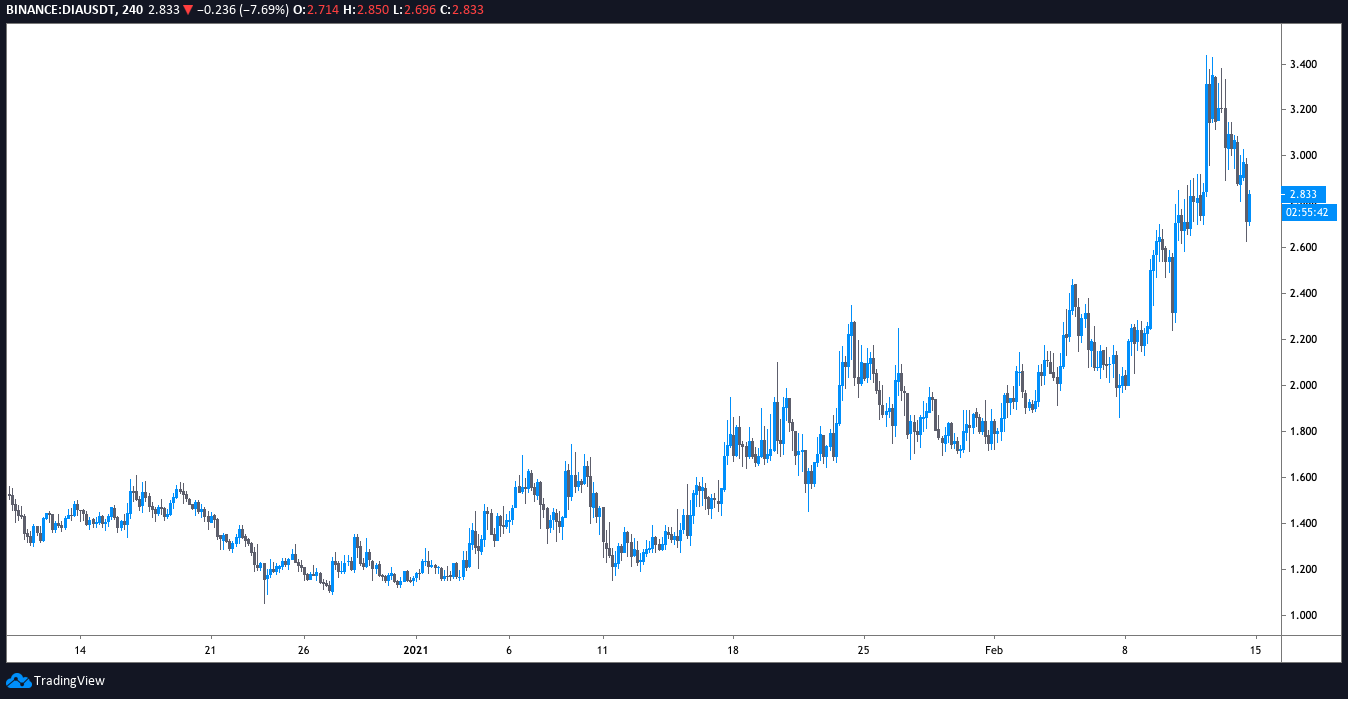 Currently, DIA trades for $2.79 after pulling back from its $3.43 monthly high

Universal Market Access (UMA), approaches the oracle issue differently than the other projects in the space. Its price discovery is obtained through a library of synthetic assets, with any price disputes that arise from registered financial contracts handled by an optimistic oracle service known as the Data Verification Mechanism (DVM).

UMA enables users to design and create self-executing, self-enforcing financial contracts on the Ethereum blockchain which are secured by economic incentives. According to the project’s website, these “priceless” derivatives are “designed to ensure proper collateralization by counterparties without the use of an on-chain price feed.”

When a price dispute is made by a financial contract that is registered on the platform, UMA token holders vote on the value of a price identifier at a historic timestamp through the DVM optimistic oracle service. Token holders who participate in the validation process receive rewards in the form of UMA tokens from the requesting party.

The UMA token is also the governance token of the Universal Market Access protocol, giving token holders the right to vote on changes to the protocol’s parameters and system upgrades. 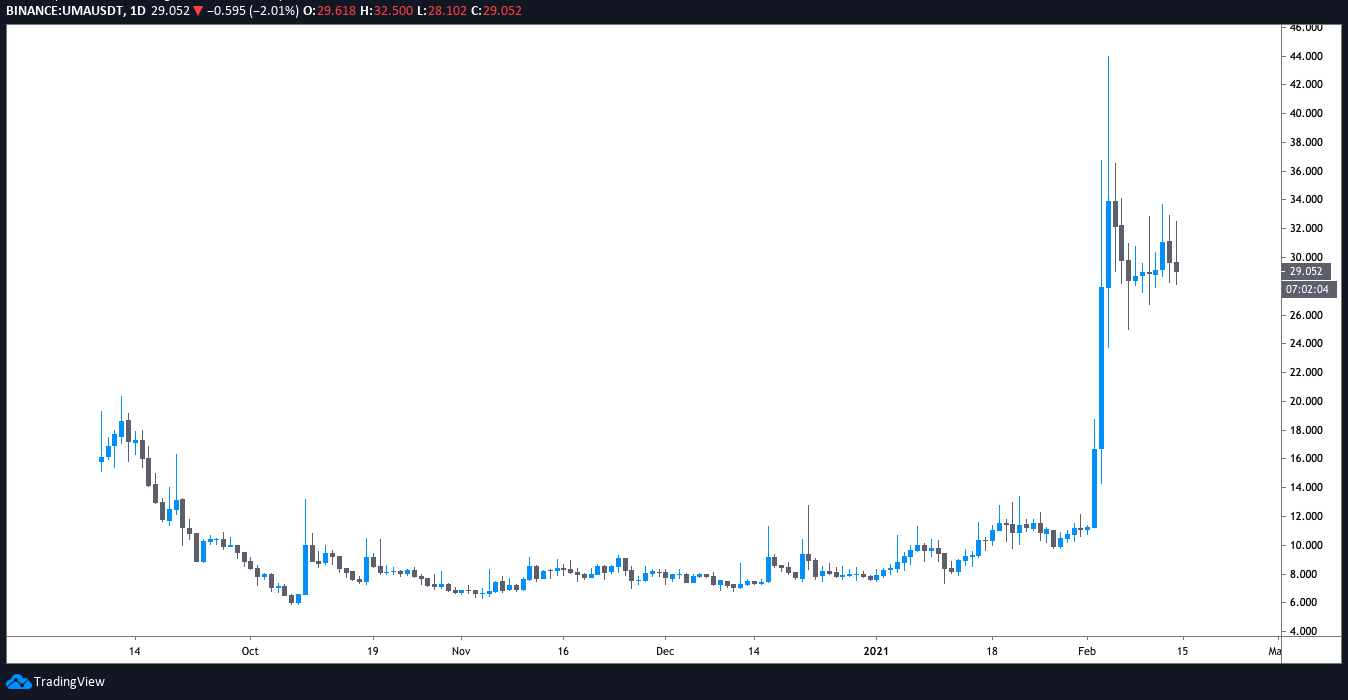 In early February UMA price went on a tear, rallying 300% from $11.06 on Feb. 1 to a new all-time high at $44.15 on Feb. 4. Since reaching this new high, UMA price corrected sharply to $25 as traders booked profits from the strong triple-digit breakout.

Crypto investors who purely focus on profits would be wise to look beyond the raw price action of trading by technical analysis and keep an eye out for projects that produce value, as they tend to be the most profitable ones.

Oracles are a key piece of infrastructure for the growing DeFi ecosystem and they offer added value through their staking, governance, liquidity pools potential to bring interoperability to siloed blockchain networks.