Long-term investors use dips in a strong uptrend to buy while short-term investors are fixated on calling a top. In the past few days, data from Glassnode has shown significantly sized Bitcoin (BTC) outflows from Coinbase exchange, which is a sign of accumulation according to analysts.

It is encouraging to note that the demand is not limited to one exchange and data from Material Indicators shows buy orders of $100,000 and higher are reaching an all-time high.

This shows that the influx of institutional investors and large corporations entering the crypto sector continues to accelerate. Proof of this comes as American Residential Warranty became the latest company to buy Bitcoin in order to maximize the returns on its investment portfolio. 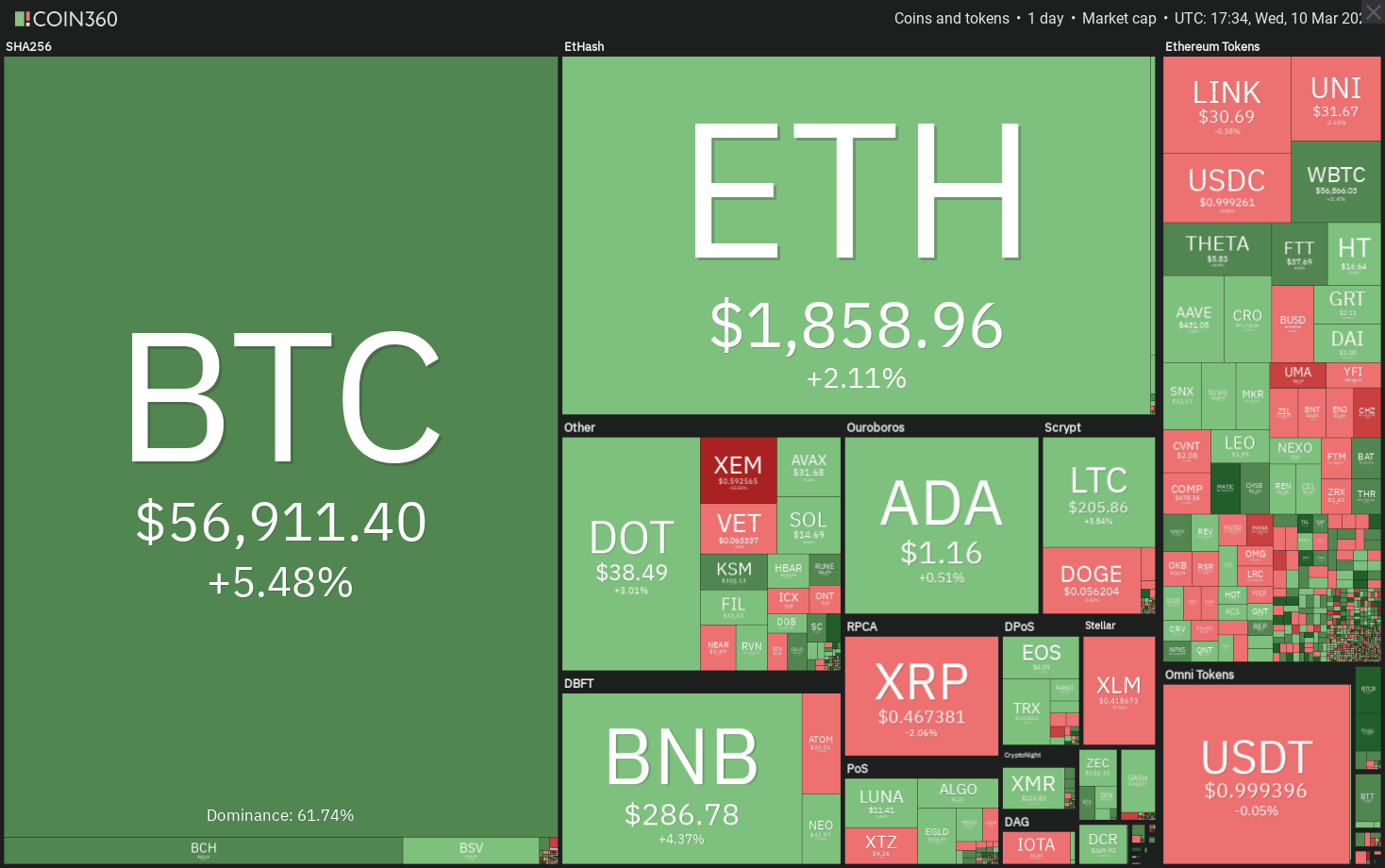 Another positive sign is the relative movement of the U.S. dollar and Bitcoin. Usually, these assets are inversely correlated, meaning when the U.S. dollar rises, Bitcoin comes under pressure and vice versa.

However, in the past few days, the rise in the U.S. dollar currency index (DXY) has not been able to stall Bitcoin’s bullish momentum. When a negative event fails to put brakes on the rally, it is a sign of strong demand.

Let’s study the charts of the top-10 cryptocurrencies to determine the possible target objectives and the critical levels on the upside.

Bitcoin broke above the $52,040.95 overhead resistance on March 8, which completed an ascending triangle pattern. This bullish setup has a target objective at $61,075.13. The bears attempted to stall the up-move today, but the long tail on the candlestick shows strong buying on dips. 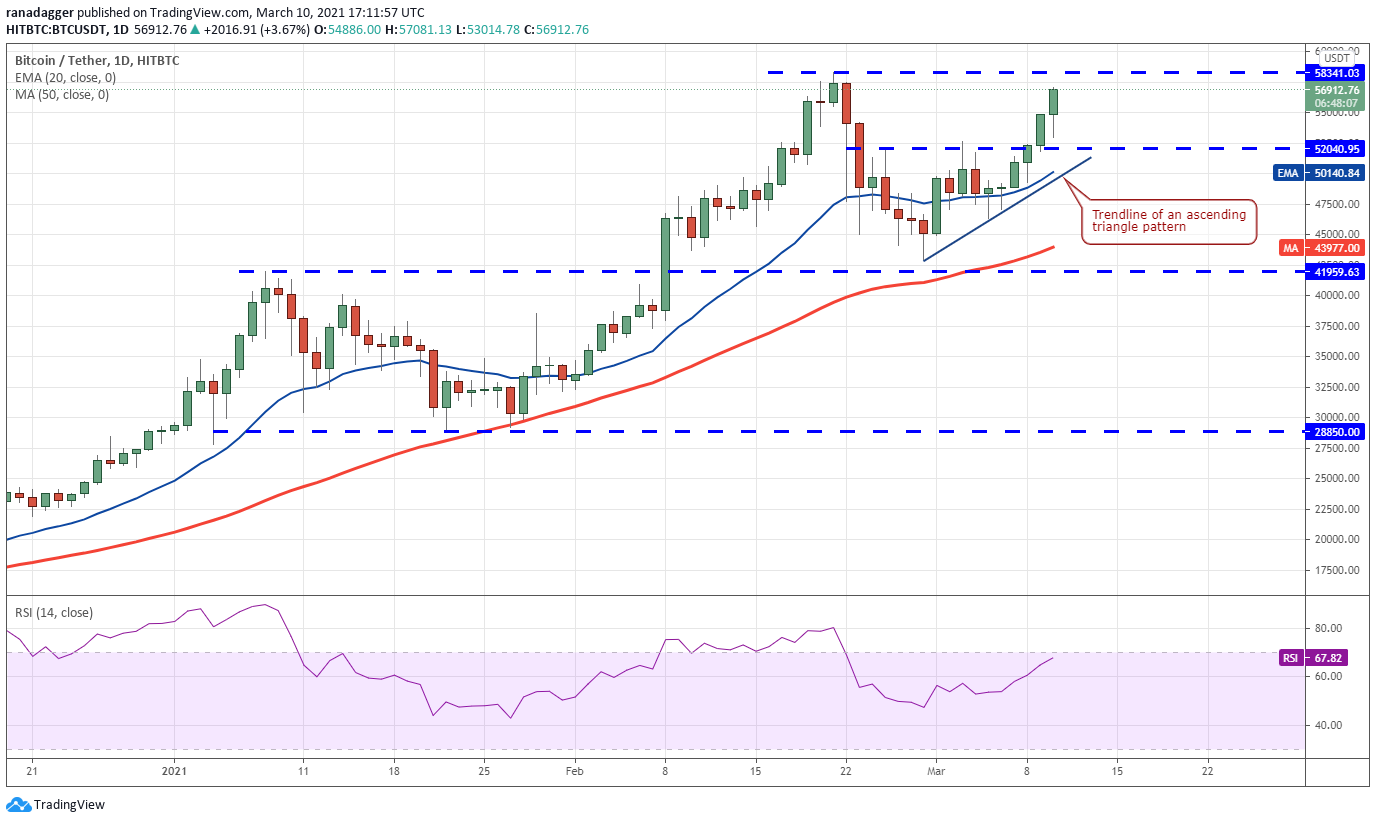 The 20-day exponential moving average ($50,140) has turned up and the relative strength index (RSI) has risen close to the overbought territory, indicating that bulls are in control.

Another possibility is that the price may rise above the all-time high, but the bears will try to trap the aggressive bulls and attempt to pull the price below $52,040.95.

In order to reverse the trend, the bears will have to sink the price below the most recent swing low at $43,006.77. 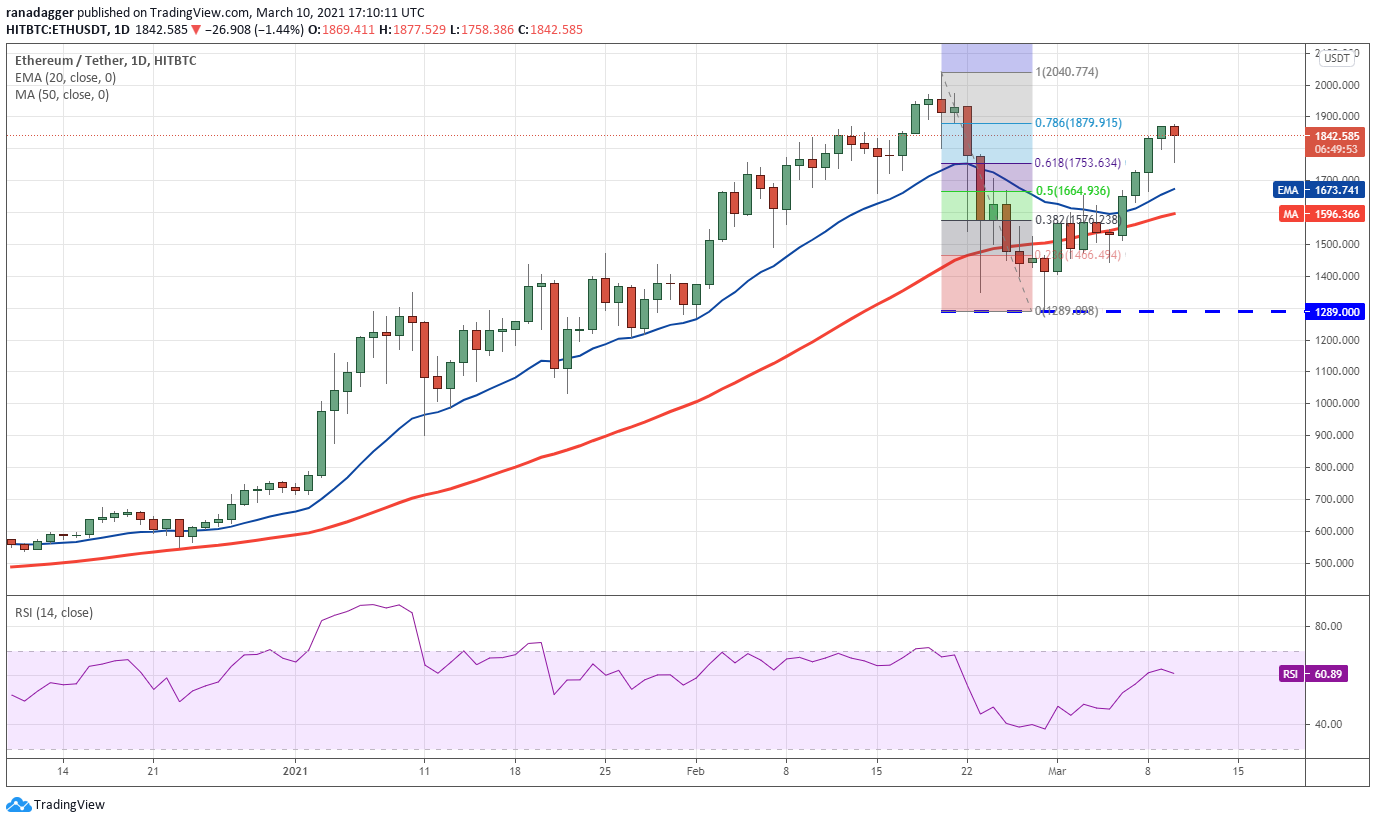 Binance Coin (BNB) soared above the $265 overhead resistance on March 9, which suggests the bulls are attempting to resume the uptrend. The long tail on today’s candlestick shows the bulls are buying on dips. 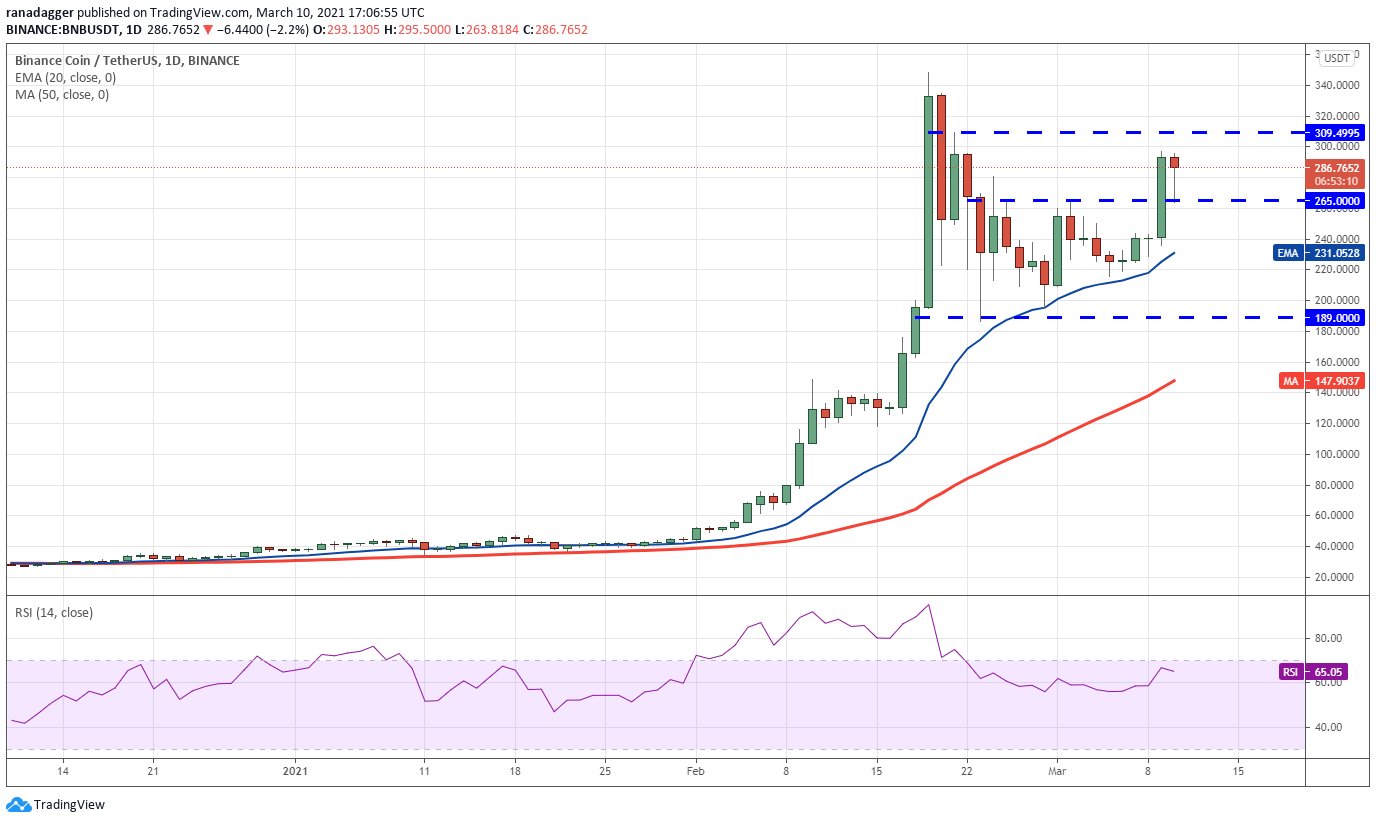 The upsloping moving averages and the RSI near the overbought territory also suggest the path of least resistance is to the upside. This bullish view could invalidate if the price turns down and breaks below the 20-day EMA ($231). Such a move may result in a decline to the critical support at $189. 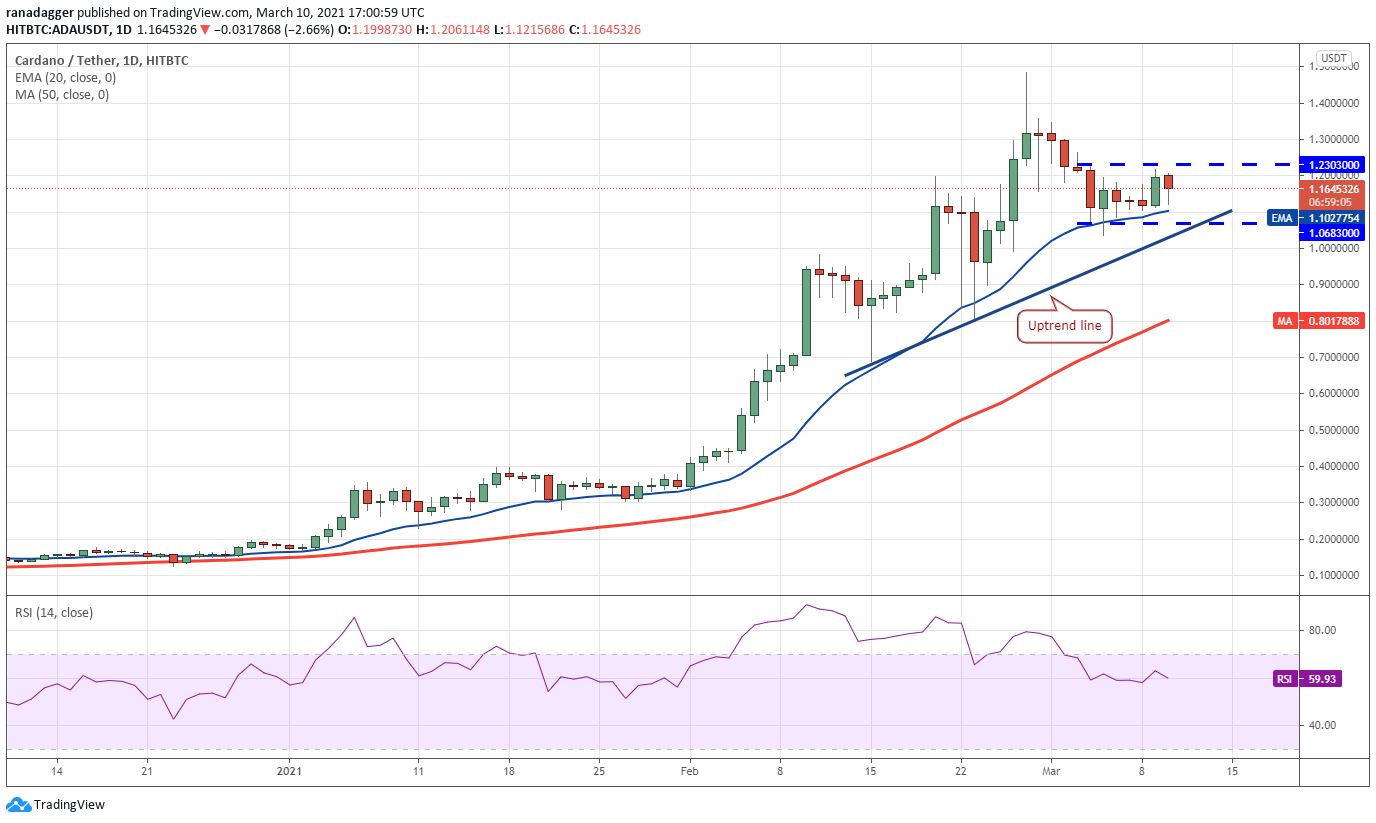 If the bulls can propel the price above $1.2303, the ADA/USD pair could start its journey to $1.35 and then to $1.48. The upsloping moving averages and the RSI in the positive territory indicate that bulls are in control.

Contrary to this assumption, if the price turns down and breaks below the range, it could signal a deeper correction. There is a minor support at $0.90 but if it cracks, the pair may drop to the 50-day simple moving average at $0.801. 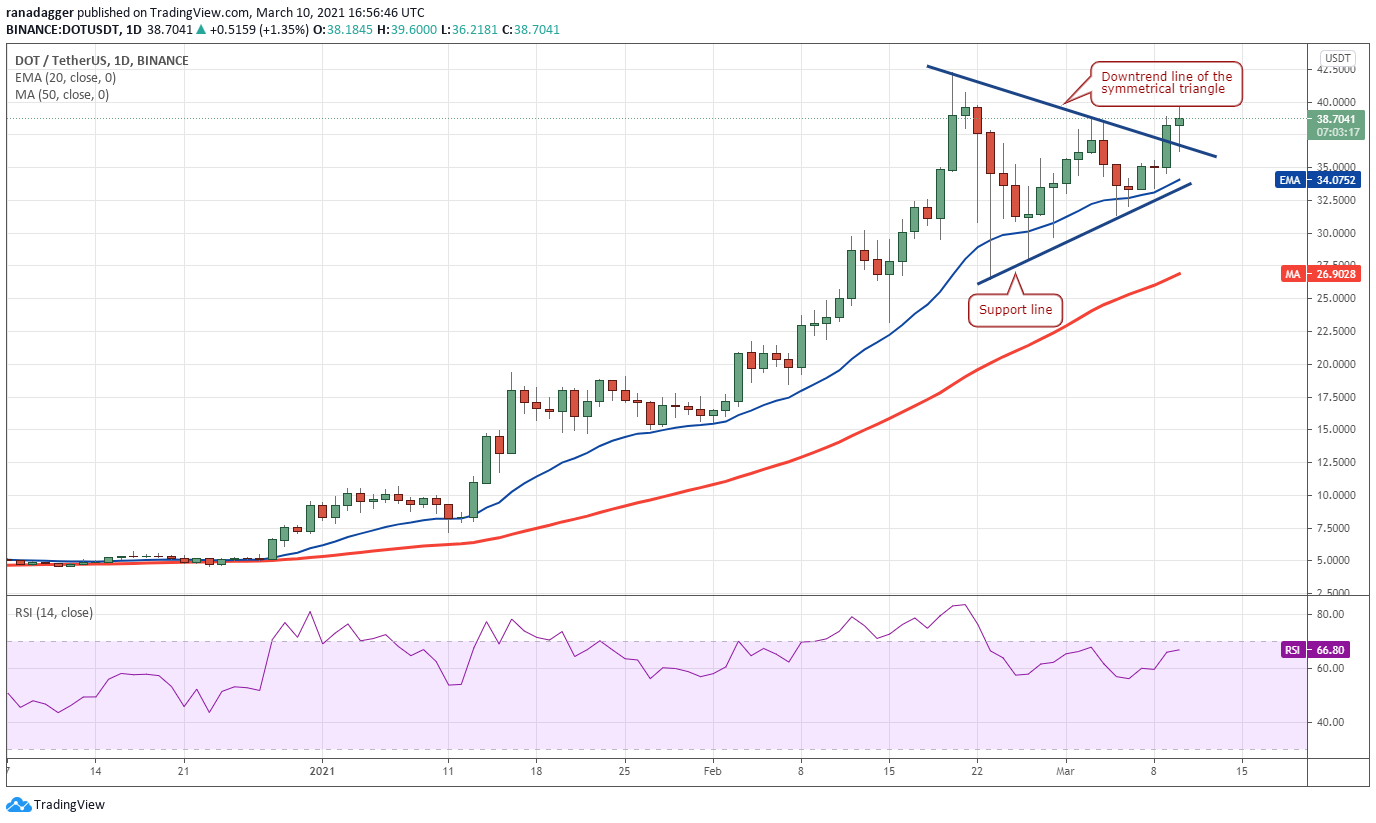 The upsloping moving averages and the RSI above 66 also suggest that the bulls have the upper hand. This bullish view will be negated if the price turns down from the current levels or the overhead resistance at $42.2848 and breaks below the support line of the triangle.

Such a move could trap the aggressive bulls and result in the liquidation of long positions. If the price sustains below the triangle, the DOT/USD pair could extend its decline to the 50-day SMA ($26.90).

XRP has once again turned down from the $0.50 overhead resistance. This shows that the bears continue to sell on relief rallies to this level. If the bears sink the price below the trendline, it will negate the ascending triangle pattern. 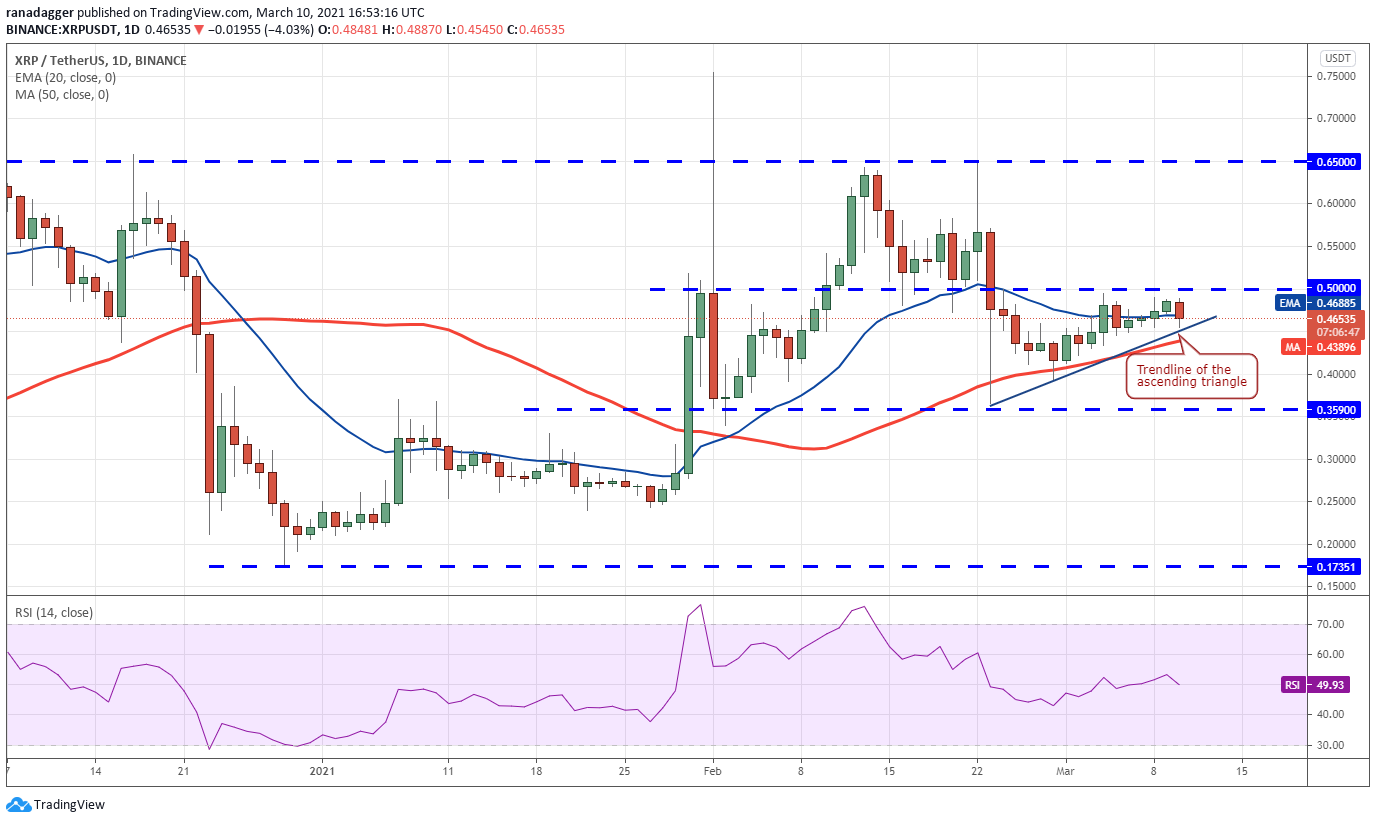 A break below the 50-day SMA ($0.43) will clear the path for a possible drop to $0.359. If the price rebounds off this support, it could keep the XRP/USD pair range-bound for a few more days.

Conversely, a break below $0.359 will complete a bearish head and shoulders pattern, which could result in a decline to $0.17351.

This bearish view will invalidate if the price turns up from the current levels and rises above $0.50. Such a move could open the doors for a rally to $0.57 and then $0.65.

Uniswap (UNI) has dropped below the breakout level of $33 and the bears will now try to pull the price down to the 20-day EMA ($27.33). The upsloping moving averages and the RSI in the positive zone suggest the path of least resistance is to the upside. 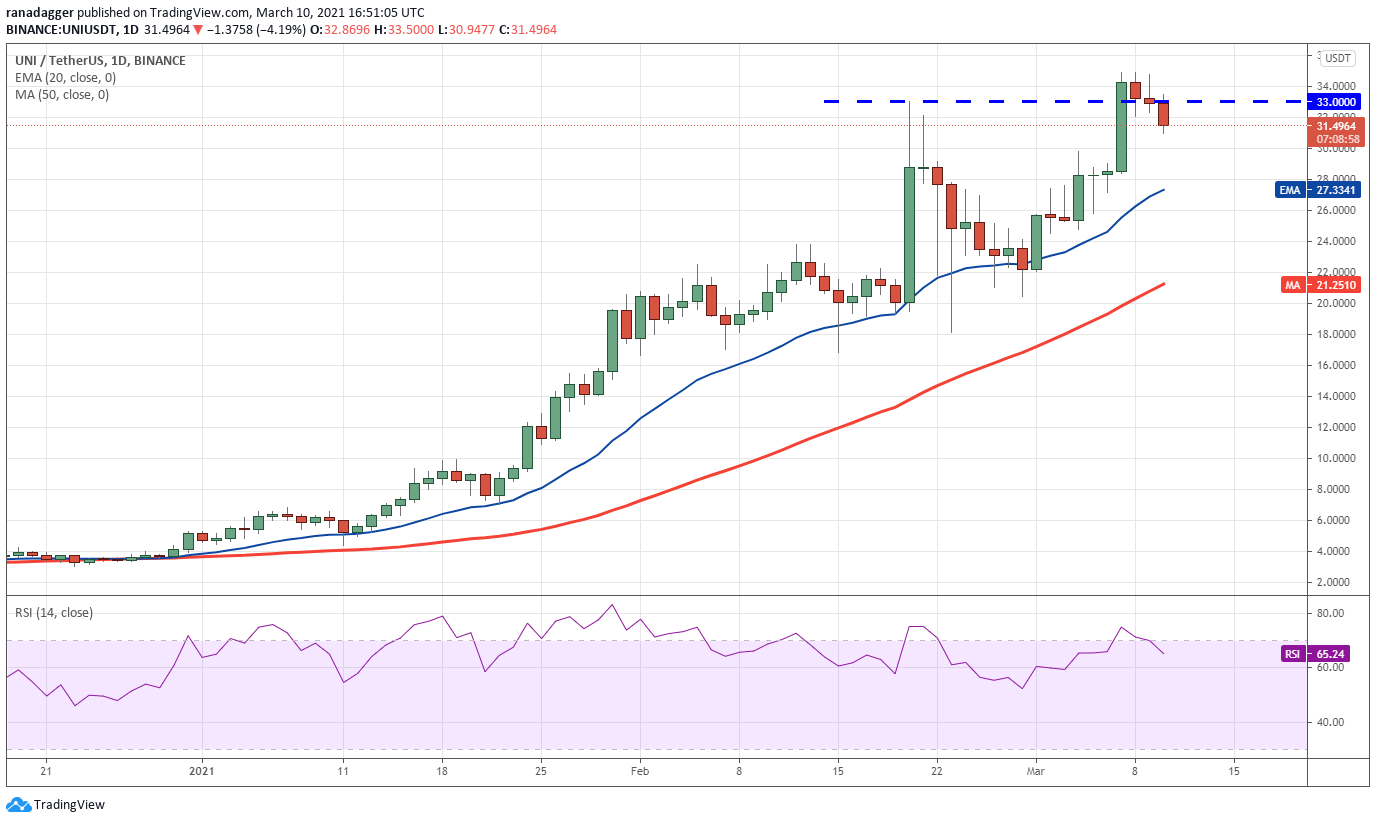 If the price rebounds off the 20-day EMA, the bulls will once again try to resume the uptrend. The UNI/USD pair could pick up momentum on a break above $35. The target objective on the upside is $46.

Contrary to this assumption, if the bears sink and sustain the price below the 20-day EMA, it will suggest a possible change in trend. The next support on the downside is the 50-day SMA at $21.25 and below it $18. 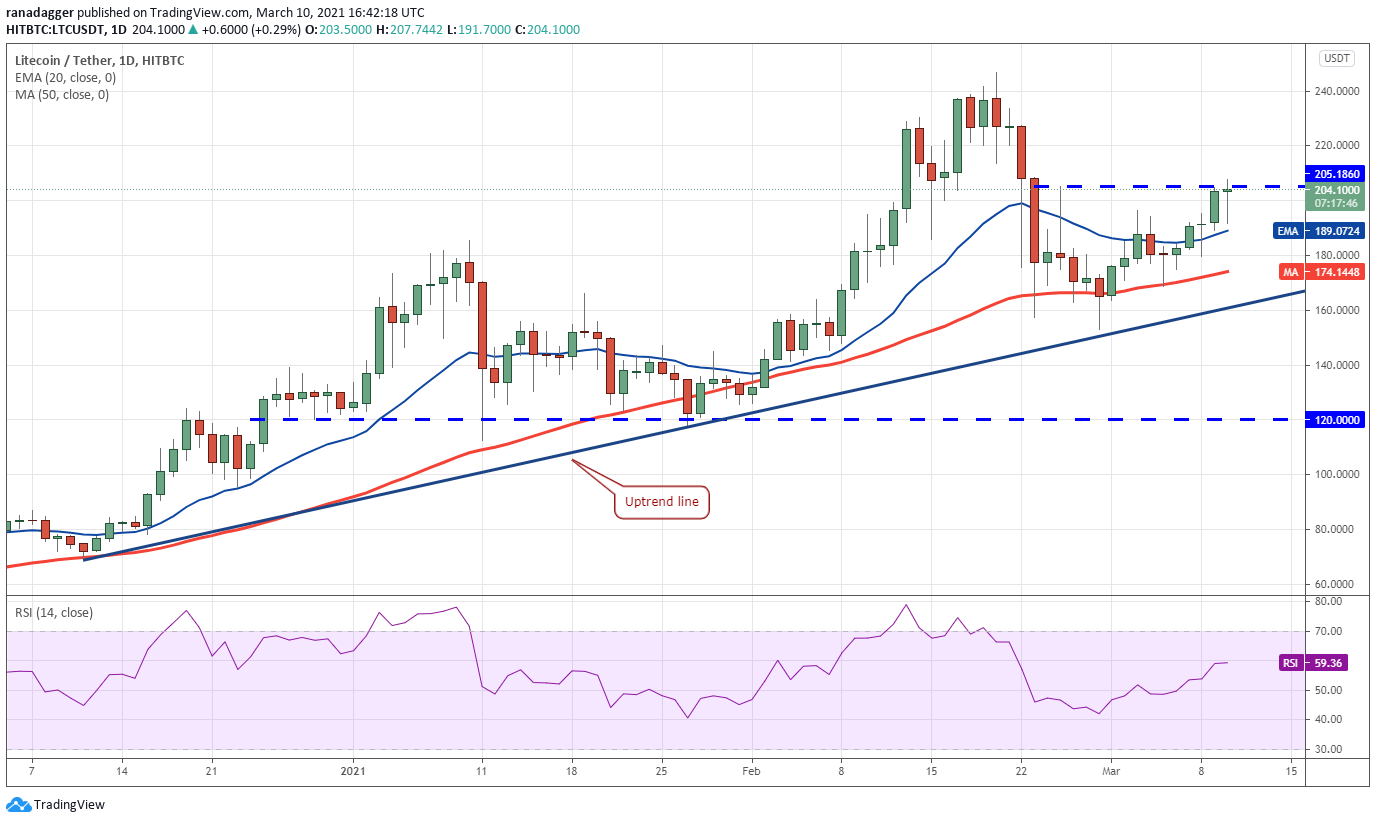 The 20-day EMA has started to turn up and the RSI has risen into the positive territory, indicating an advantage to the bulls.

However, the bears are unlikely to give up easily. If the price turns down and breaks below the moving averages, the LTC/USD pair could drop to the uptrend line. A breakdown and close below this support could intensify the selling.

Chainlink (LINK) soared above the 20-day EMA ($28.99) on March 8 and reached the overhead resistance at $32. However, the bulls could not push the price above it, indicating selling by the bears near the resistance. 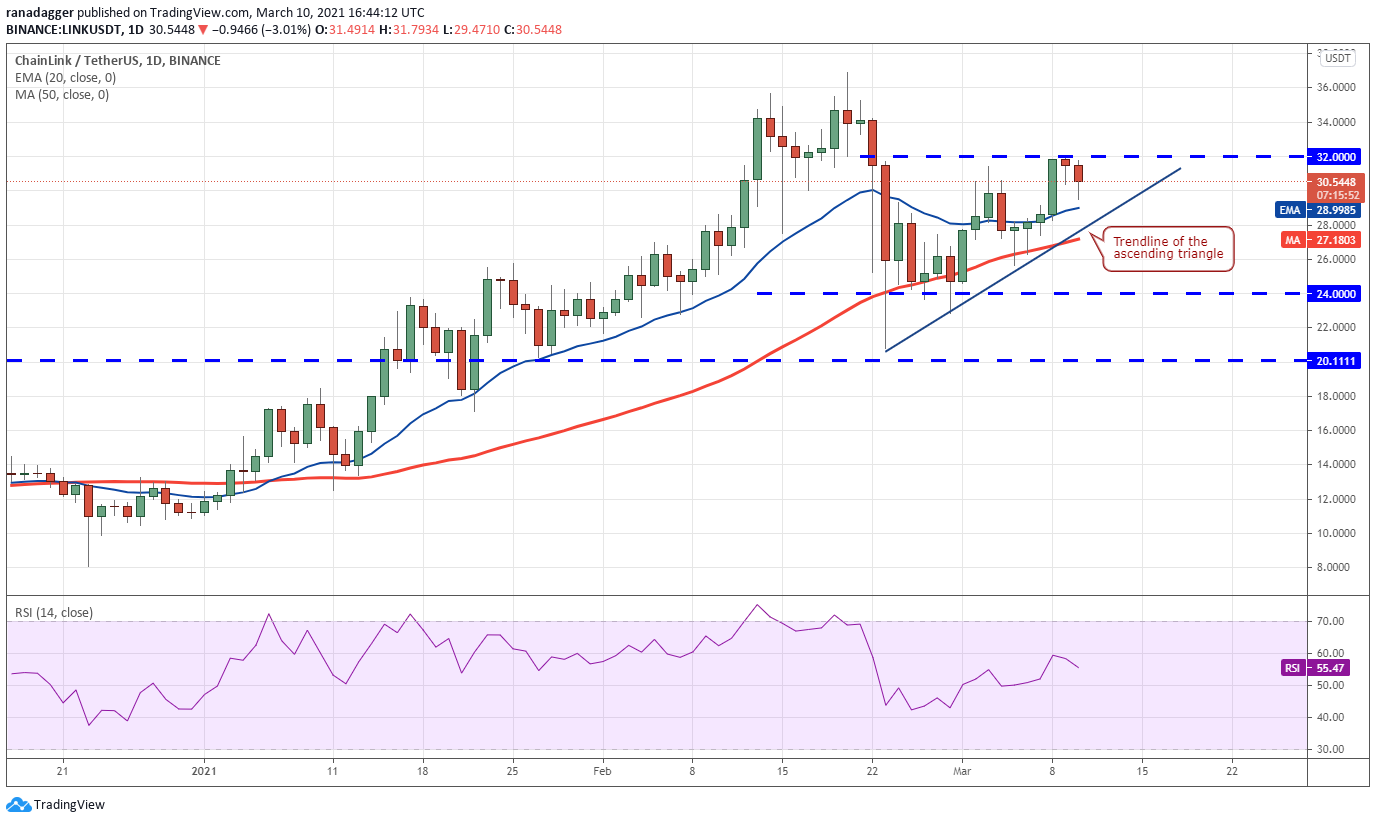 The price has turned down from $32 and the bears are now trying to sink the LINK/USD pair below the trendline. If they manage to do that, the bullish ascending triangle pattern will be invalidated.

When a bullish setup breaks down, it usually traps the aggressive buyers who are then forced to cover their positions. The support level to watch on the downside is $24 and then $20.11.

Conversely, if the price rebounds off the 20-day EMA, the bulls will try to push the pair above $32. If they succeed, the pair may start its rally to $36.93 and then to $43.19. The gradually rising moving averages and the RSI just above the midpoint suggest a minor advantage to the bulls.

Bitcoin Cash (BCH) has formed an ascending triangle pattern that will complete on a breakout and close above $560. If that happens, the altcoin could start its journey to $631.71 and then to the pattern target at $688. 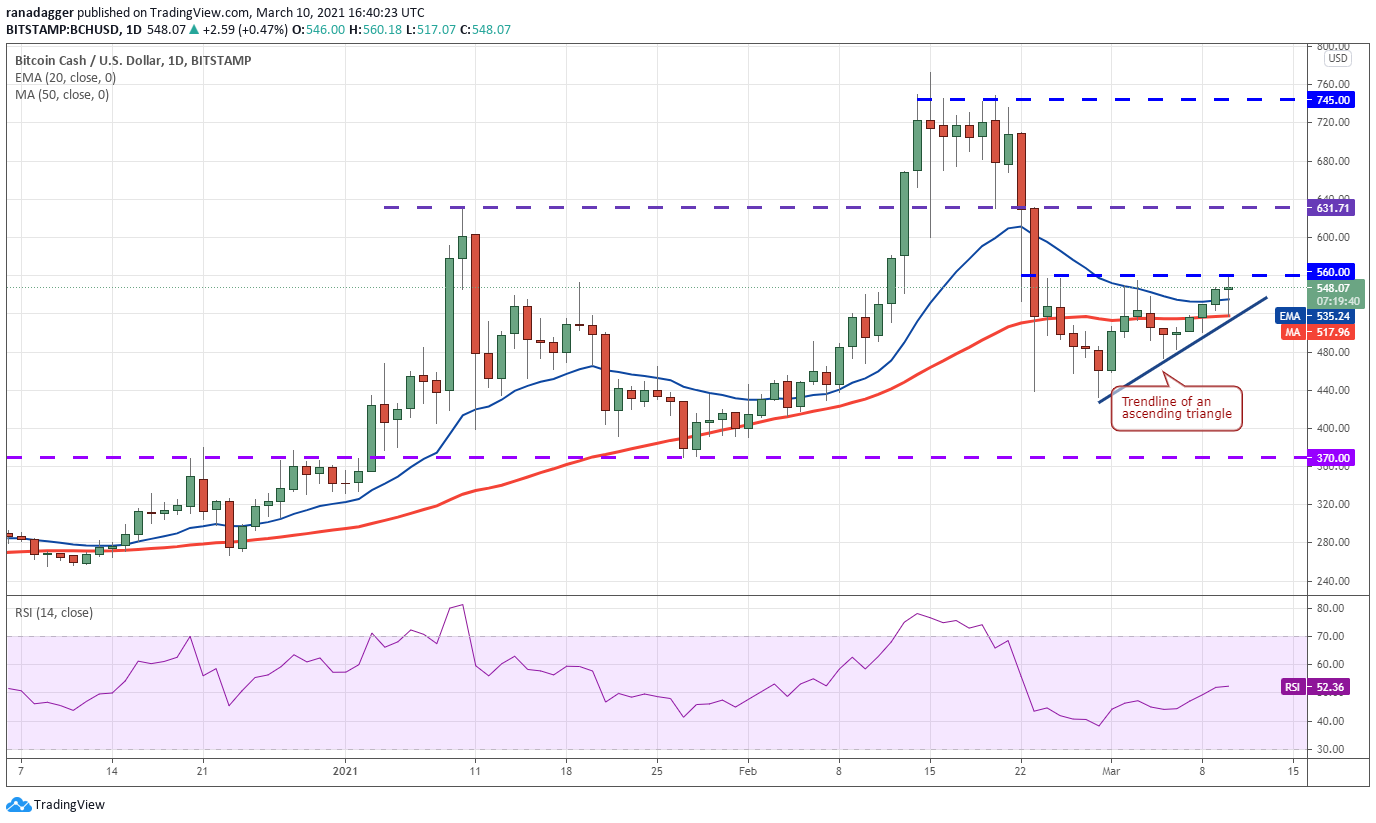 On the contrary, if the price turns down from $560, the bears will try to sink it below the moving averages and the trendline. If they succeed, the BCH/USD pair could drop to $472.72 and then $432.02.

Both moving averages are flat and the RSI has been hovering around the midpoint, which does not give a clear advantage either to the bulls or the bears.