Bitcoin (BTC) bulls finally mustered enough strength to push the top-ranked cryptocurrency through the $60,000 level and citing key on-chain metrics, analysts believe the bull run has a ways to go before reaching any considerable resistance.

Since pushing back above $50,000 on March 9, every dip in Bitcoin price has been quickly purchased by institutional investors and the BTC balance of whales has also continued to grow over the past few months. 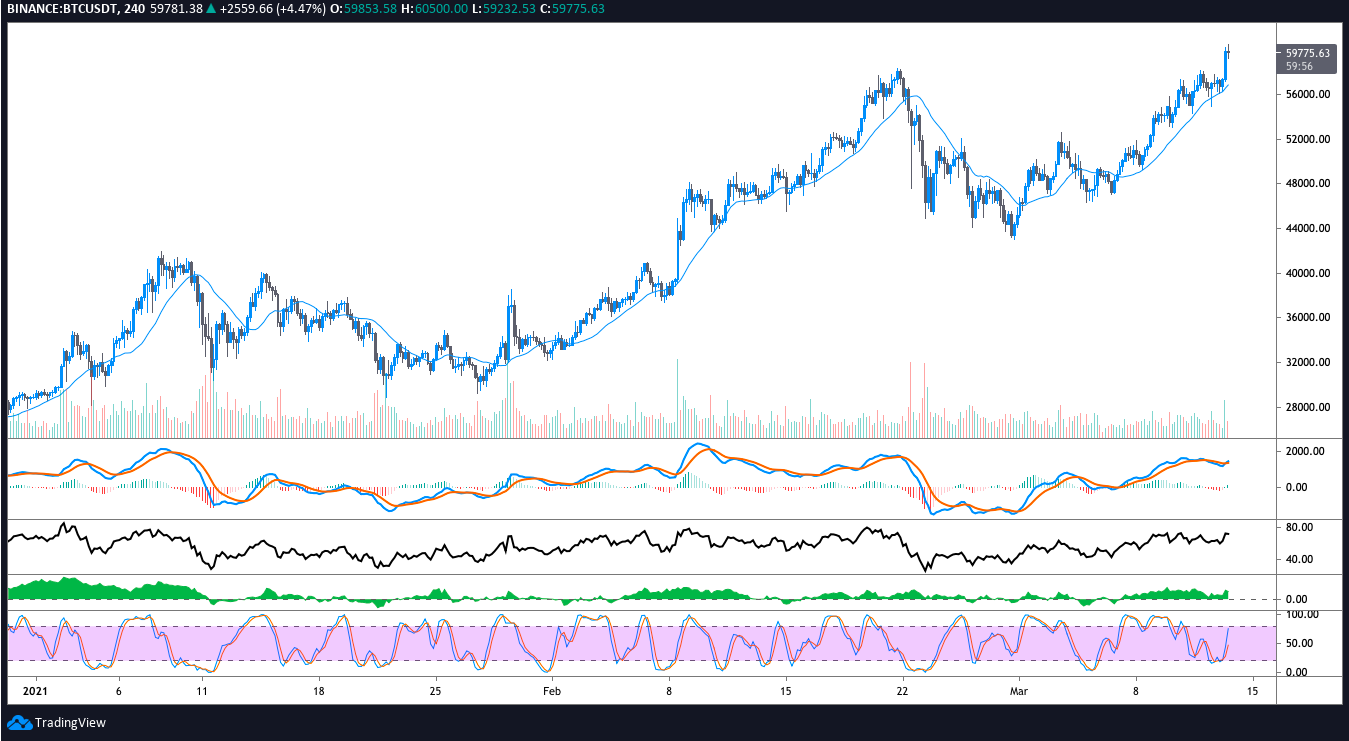 What’s next for Bitcoin price?

A recent report from Ben Lilly, an analyst at Jarvis Labs, analyst Ben Lilly highlighted the “two steps forward, one step back” nature of Bitcoin’s price movements over the past week, noting that the rise in price was accompanied by “four drawbacks of 5%”.

According to Lilly, Bitcoin’s price action is a good sign of healthy profit-taking as vertical prices are “only healthy when breaking all-time highs,” otherwise known as price discovery.

To get a better understanding of where price may be headed, Lilly noted that wallet sizes holding 100 to 1,000 BTC hold about 63,000 more BTC than they did on Feb. 28, indicating that these whale wallets have been accumulating since the dip in preparation for the price to move higher.

According to Lilly, “this class of wallets were the ones that timed the 2017 rally the best.” 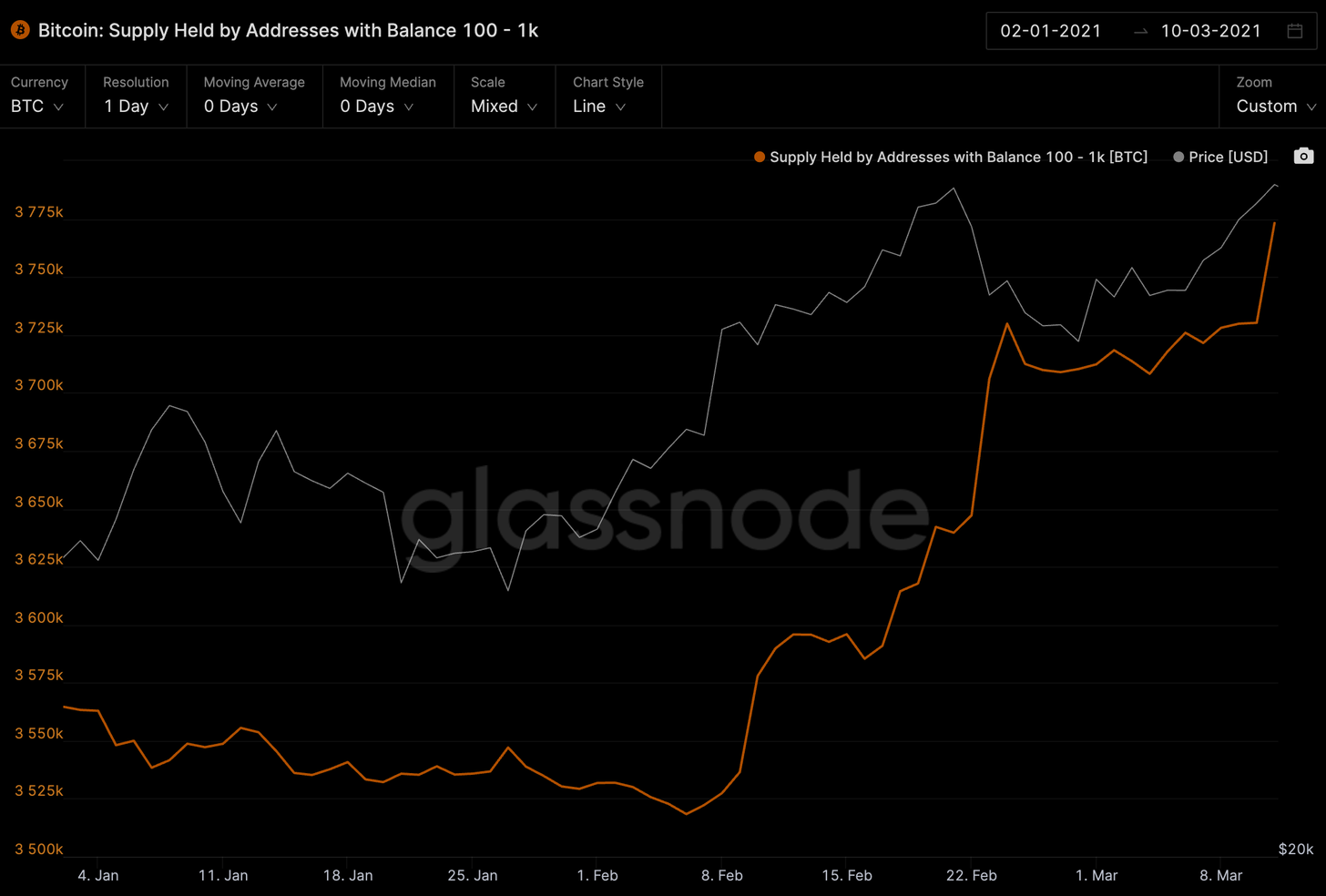 Another bullish indicator highlighted by Lilly is the heavy accumulation that has been happening since BTC price broke $20,000 which hasn’t slowed down since.

“Last time we saw accumulation that was this aggressive was back in August 2017. The top of that market cycle wasn’t seen for another four months.”

Lilly further explained that while it is nearly customary for Bitcoin price to see occassional drawdowns after touching a new all-time high, they do little to alter the bullish uptrend.

“So in order to avoid any confusion on what we’re trying to say with these charts… Bitcoin has room to run here. If it decides to rip, it’ll go.”

A recent report from Decentrader co-founder Philip Swift echos Lilly’s bullish sentiment by pointing to Bitcoin exchange outflows over the past few months. As shown in the chart below, Coinbase and Bitstamp experienced a significant drawdown in their exchange balances since mid-December in 2020. 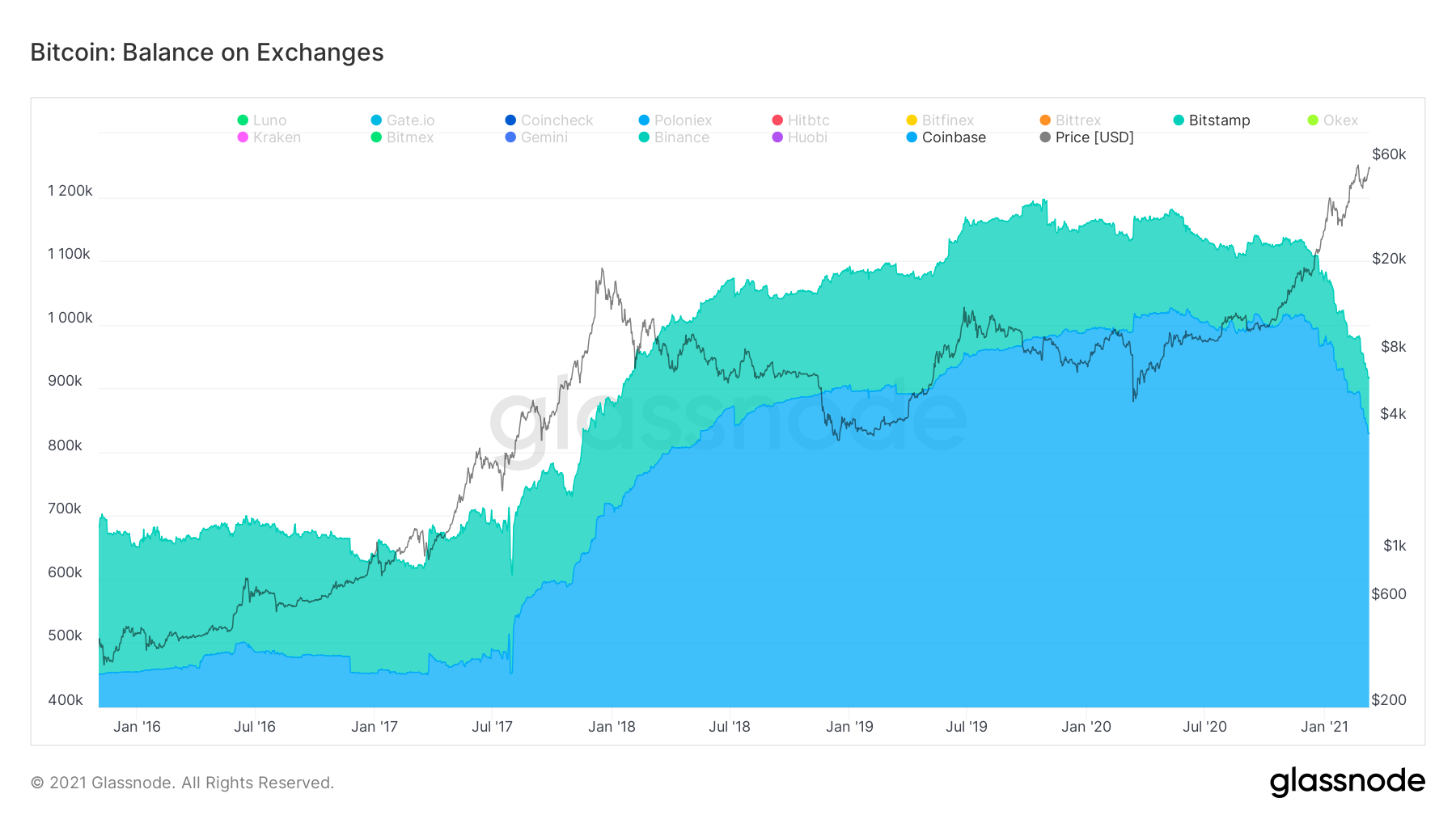 The report highlighted that the reduction in available BTC is “being driven by people and institutions taking Bitcoin off exchanges to keep in cold storage.” This in turn reduces the liquid supply available to quickly sell into the market and decreases the changes of a rapid selloff.

Swift did note that a large amount of BTC being pulled off exchanges is being wrapped into WBTC and put into DeFi protocols. This somewhat reduces the bullish narrative as the tokens aren’t fully removed from circulation and put into cold storage, meaning the liquidity hasn’t really been reduced.

Another interesting signal discussed by Decentrader is the comparison between Bitcoin being held for one to two years compared to those being held for three or more years.

In recent weeks BTC held by investors for less than three years have started to be sold as ‘shorter term’ holders begin to take profits. While these levels are declining, Bitcoin investors who have been holding for more than three years have actually been accumulating recently and according to Swift, this signals that “Bitcoin still likely has a lot more upside to go” in the current bull cycle. 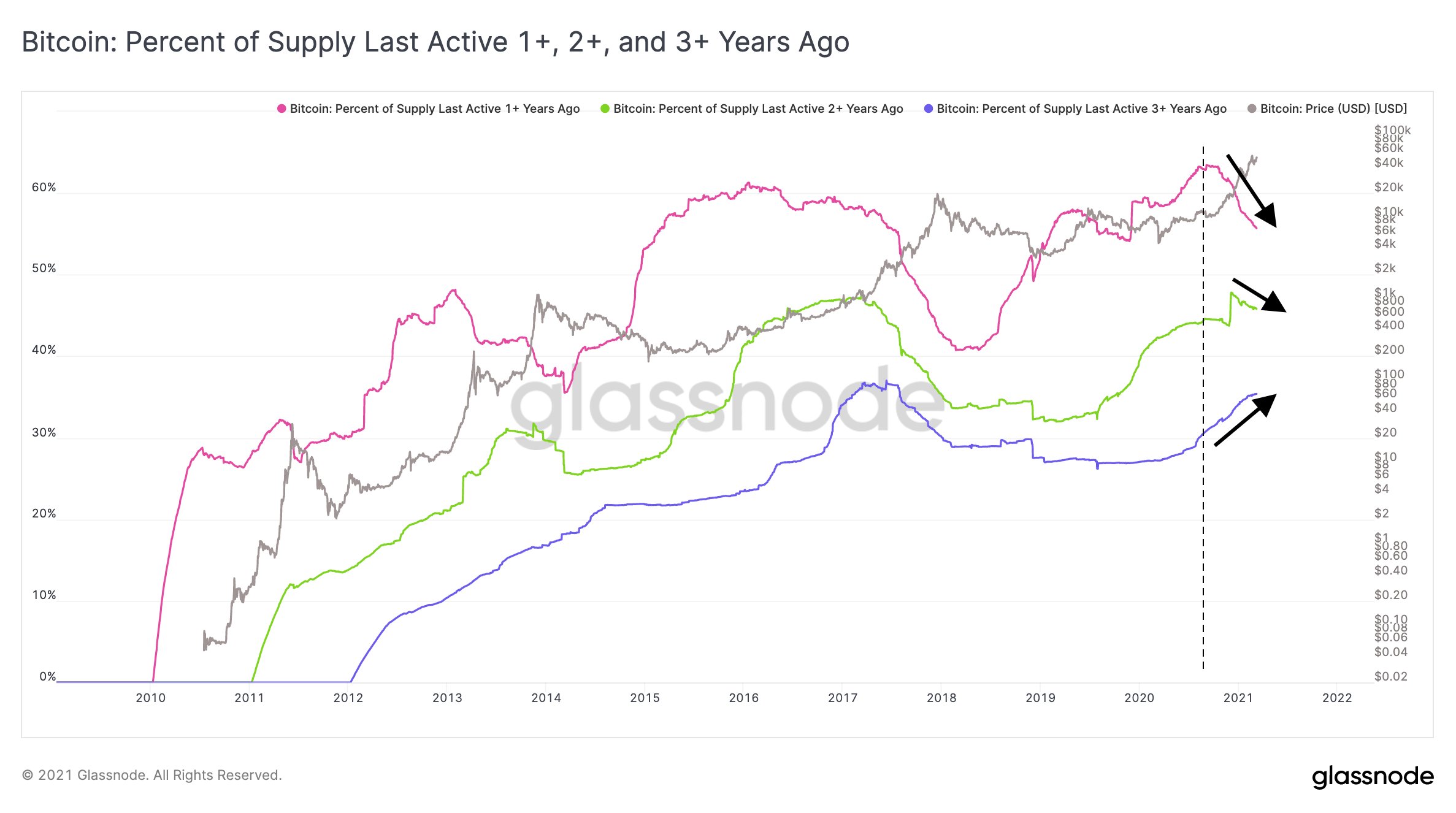 “Looking at that chart, it is possible to see where we are compared to the previous 2017 cycle when these HODL lines were behaving in a similar way… approaching roughly half-way through the cycle in our opinion.”

For David Lifchitz, Chief Investment Officer at ExoAlpha, the price action for Bitcoin between Feb. 22 and March 11 appears to be forming the classic cup and handle formation which is a bullish pattern according to technical analysis. Lifchitz explained that the price drop experienced in March 11 represented the “top of the cup” by those who monetized the 10% gain from $45,000 to $57,000.”

According to Lifchitz, a mild pullback no lower than the $52,000 and a bounce back up would form the handle of the cup. The breakout above the rim of the cup ($58,000) would open the door for another leg-up from Bitcoin price.