Bitcoin (BTC) has risen more than 1,000% since March 2020 and this shows that the digital asset has outperformed traditional asset classes like equities, commodities and bonds by a massive margin.

The resilience of Bitcoin even after the sharp rally continues to attract buyers. Jarvis Labs analyst Ben Lilly said the whales who hold between 100 to 1,000 Bitcoin have added about 63,000 Bitcoin in their combined holdings since Feb. 28.

The activities of this group of whales are worth monitoring because Lilly said “this class of wallets were the ones that timed the 2017 rally the best.” 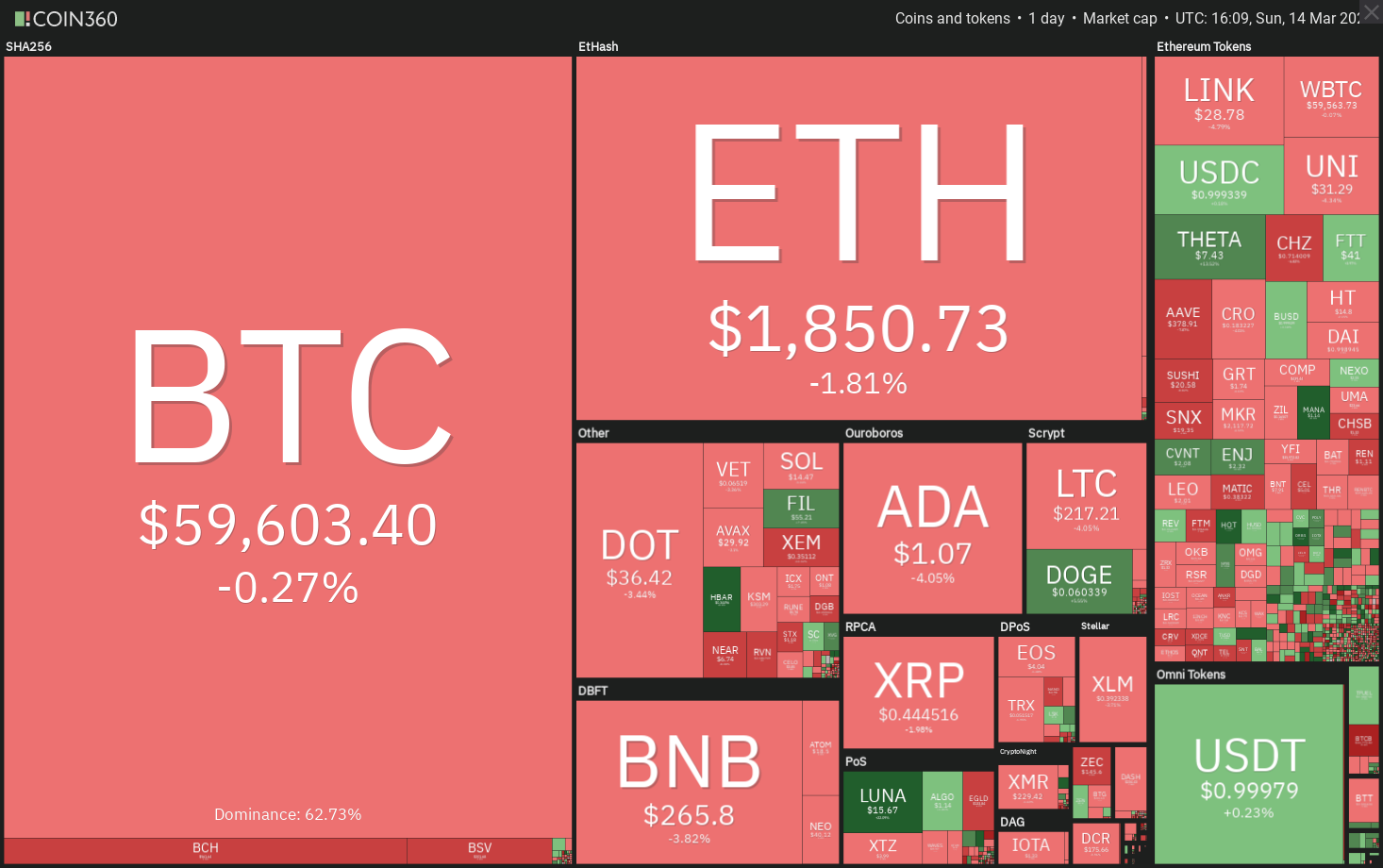 In addition to the whales, Bitcoin adoption by companies also continues to increase. RushOrderTees, a t-shirt printing and embroidering company, recently revealed it had purchased roughly $300,000 worth of Bitcoin and other cryptocurrencies in the past month and they intend to increase it to $1 million by the end of April.

This shows that even smaller firms are shifting part of their treasury assets from fiat to cryptocurrency. If this trend catches up, it could soon add a new class of investors to the crypto sector.

Let’s study the charts of the top-5 cryptocurrencies that may outperform the others in the next few days.

Bitcoin resumed its uptrend on March 13 when it soared above the all-time high at $58,341. The bears will now try to pull the price back below the breakout level and trap the aggressive traders while the bulls will try to flip $58,341 into support. 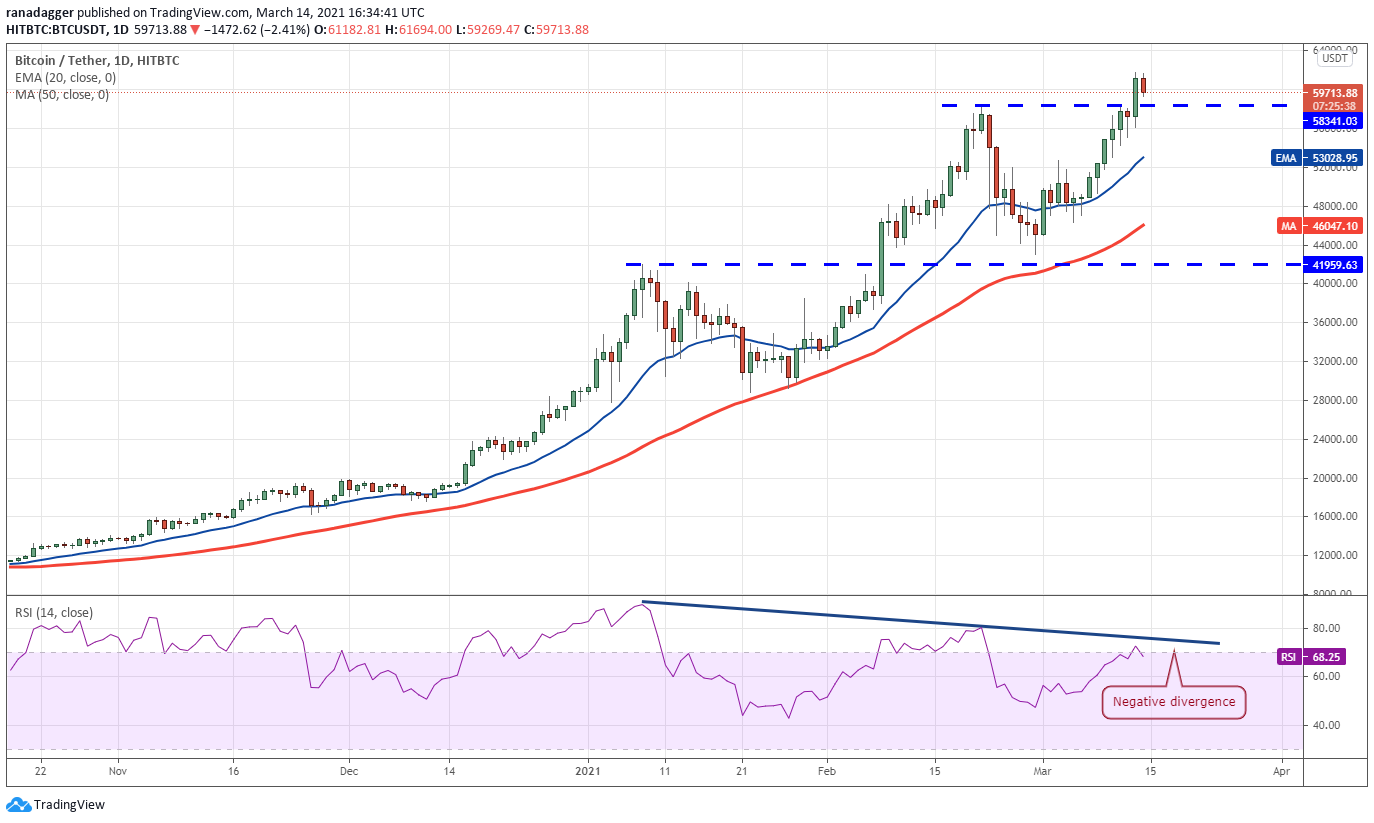 If the bulls succeed in their endeavor, the BTC/USD pair could start its journey toward the next target objective at $72,112. The upsloping moving averages suggest that bulls have the upper hand.

If the price slides below $58,341 but rebounds off the 20-day exponential moving average ($53,028), it will indicate that the sentiment remains positive as buyers are accumulating on dips.

However, it is not all bullish on the charts because the negative divergence on the relative strength index (RSI) indicates the momentum is weakening. Sometimes the negative divergence gets invalidated during a strong bull run, but its occurrence warrants caution because on several occasions it successfully predicts a reversal.

If the 20-day EMA cracks, it will suggest that supply exceeds demand and traders are rushing to book profits. That may pull the price down to the 50-day simple moving average ($46,047) and then $41,959. Such a deep fall could delay the start of the next leg of the up-move. 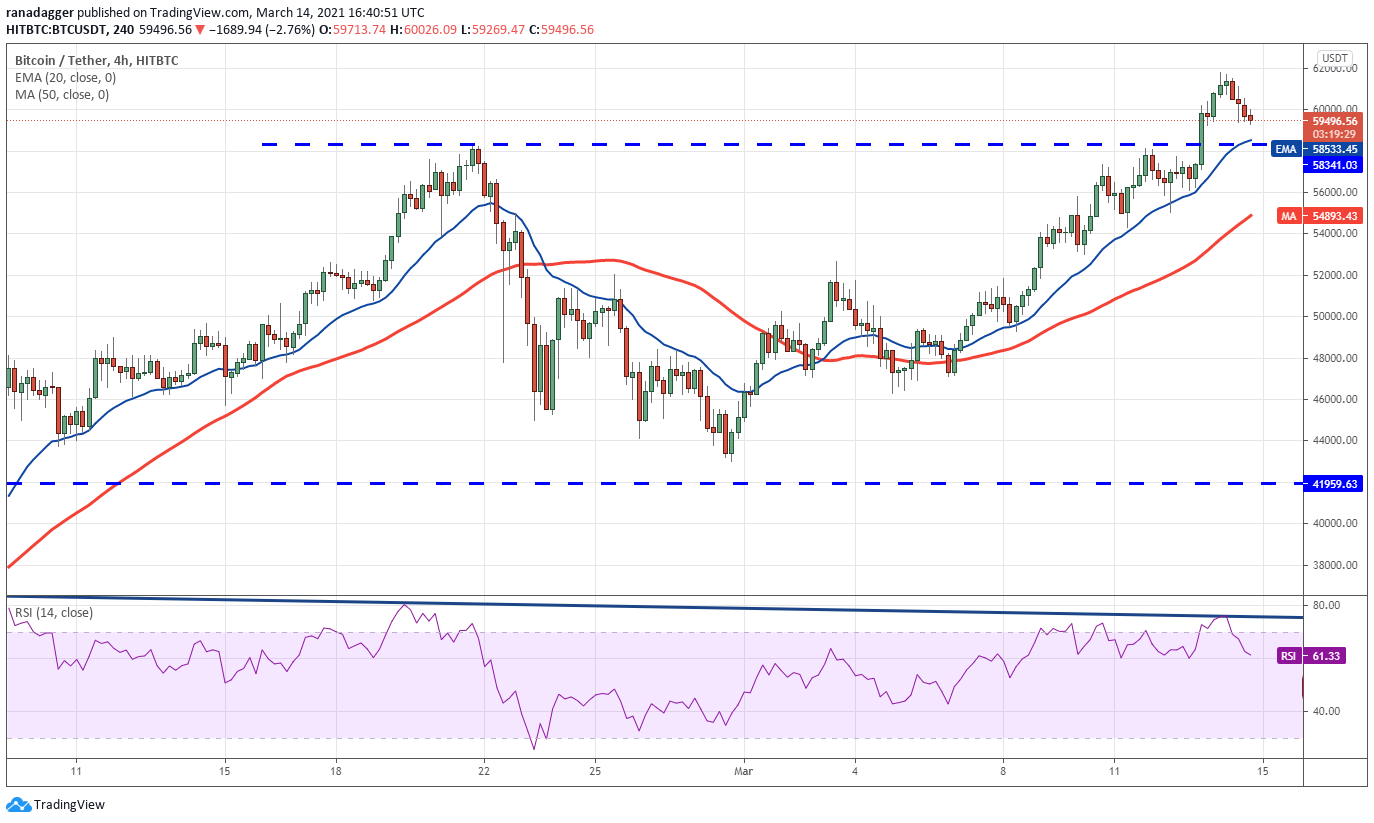 The 4-hour chart shows the bulls have repeatedly bought the dips to the 20-EMA. Therefore, the bulls may again try to defend the 20-EMA. If the price rebounds off this support, a retest of $61,825 is likely. A breakout of this resistance may indicate the start of the next leg of the uptrend.

Alternatively, if the price breaks below the 20-EMA support, it will signal a possible change in the short-term trend. The next support is at $56,000 and then at the 50-SMA. A break below this support will suggest that the breakout above $58,341 may have been a bull trap.

Ether (ETH) broke above the 78.6% Fibonacci retracement level at $1,879on March 13, but the bulls could not sustain the momentum and challenge the all-time high at $2,040. This suggests the bears are aggressively defending the $1,879 to $2,040. resistance zone. 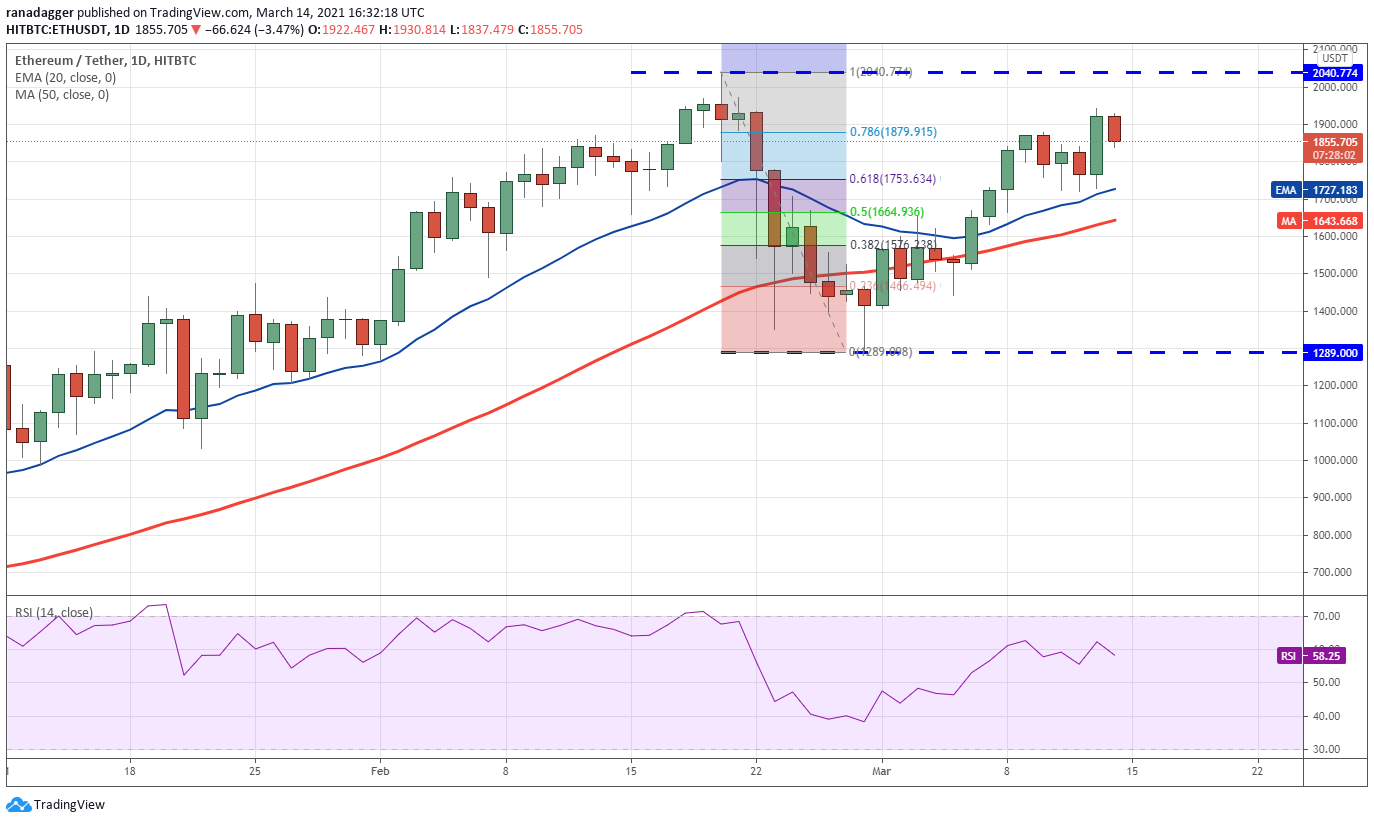 The ETH/USD pair may now again drop to the 20-day EMA ($1,727). A strong bounce off this support will suggest the bulls continue to accumulate on dips. That may enhance the prospects of a retest and breakout above $2,040.

Conversely, if the price dips below both moving averages, it will suggest that supply exceeds demand. That could keep the pair stuck inside the large range between $1,289 and $2,040 for a few more days. 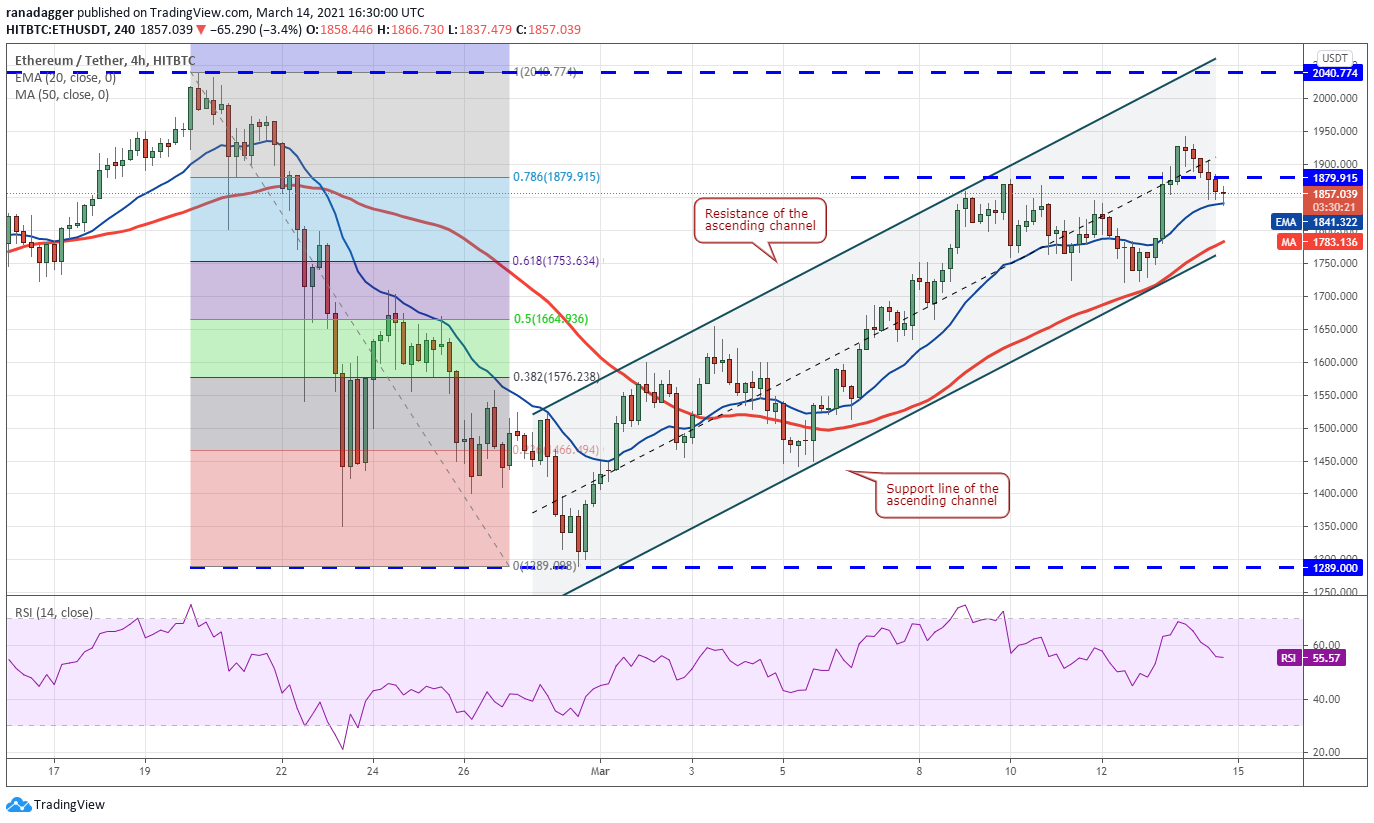 The 4-hour chart shows the bears have dragged the price back below $1,879. The pair could now drop to the support line of the ascending channel. If the price rebounds off this support, it will keep the short-term trend in favor of the bulls. The buyers will then again try to resume the up-move.

On the contrary, if the bears drag the price below the channel, it will indicate a possible change in trend. The price may then drop to $1,650 and $1,450.

VeChain (VET) broke above the $0.0345 to $0.0607 range on March 8. This suggests that the bulls have overpowered the bears. However, the sellers have not conceded defeat as they are trying to stall the up-move at $0.0725. 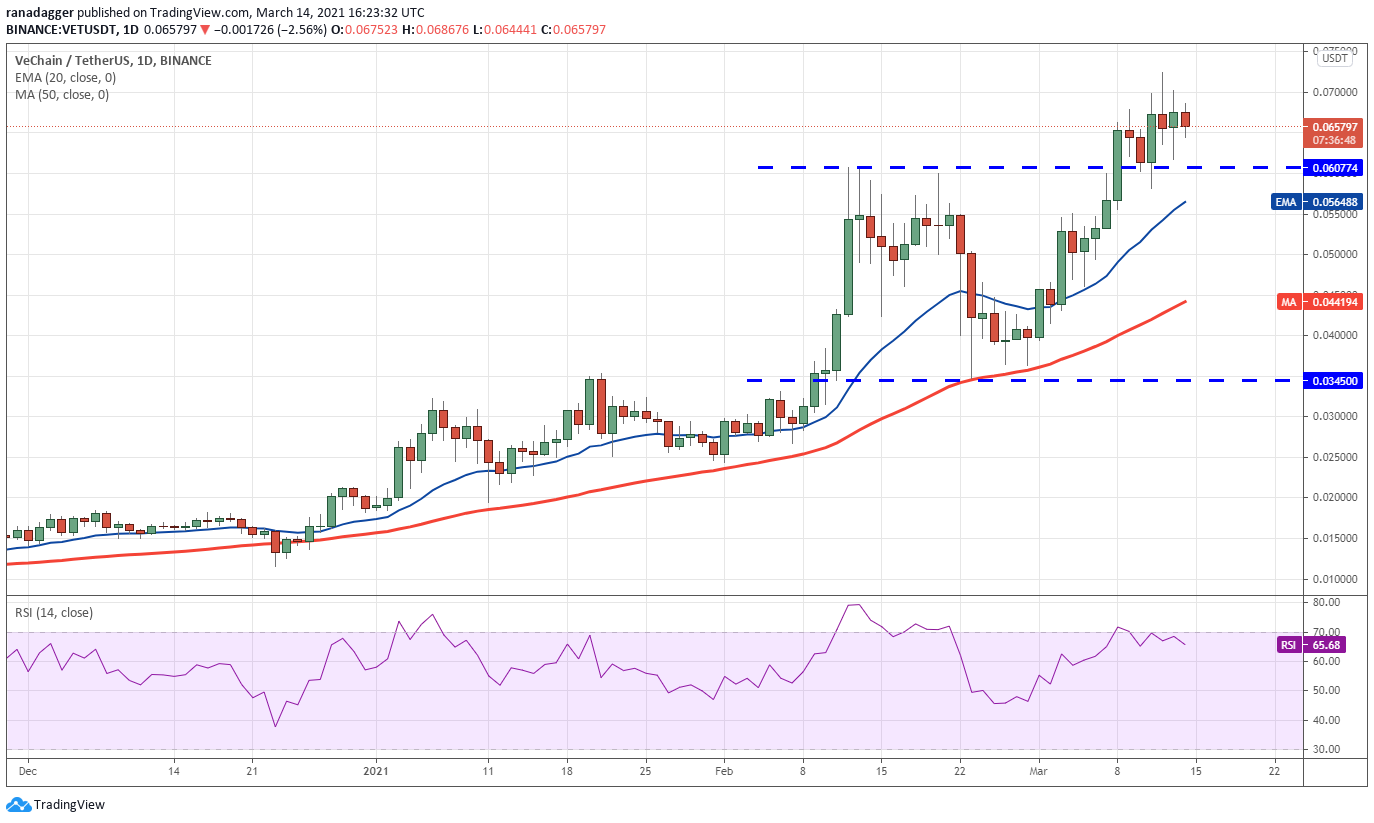 If the price once again rebounds off the $0.0607 support, it will suggest that the level has flipped to support. The level may then act as a launchpad for the next leg of the uptrend that could reach $0.0870 and then $0.10.

The upsloping moving averages and the RSI near the overbought territory suggest the bulls are in command. 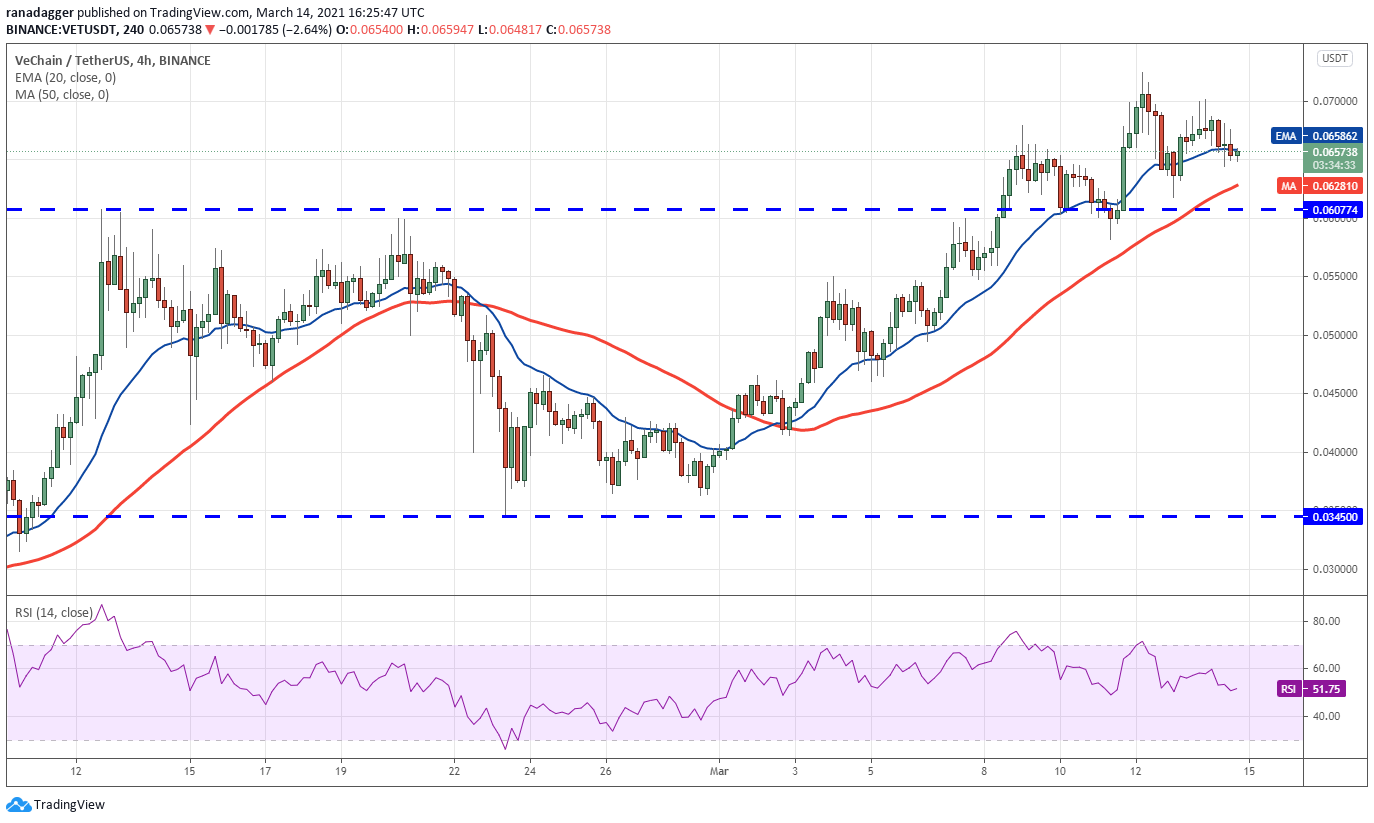 The price has dipped below the 20-EMA on the 4-hour chart. The bears will now try to sink the pair back below the breakout level at $0.0607.

If they succeed, it will suggest that demand dries up at higher levels. The pair could then drop to $0.050. A deeper fall could delay the start of the next leg of the uptrend and keep the price stuck inside a range.

Conversely, if the price rebounds off $0.0607, the pair may retest $0.0725. A breakout of this resistance could resume the uptrend. 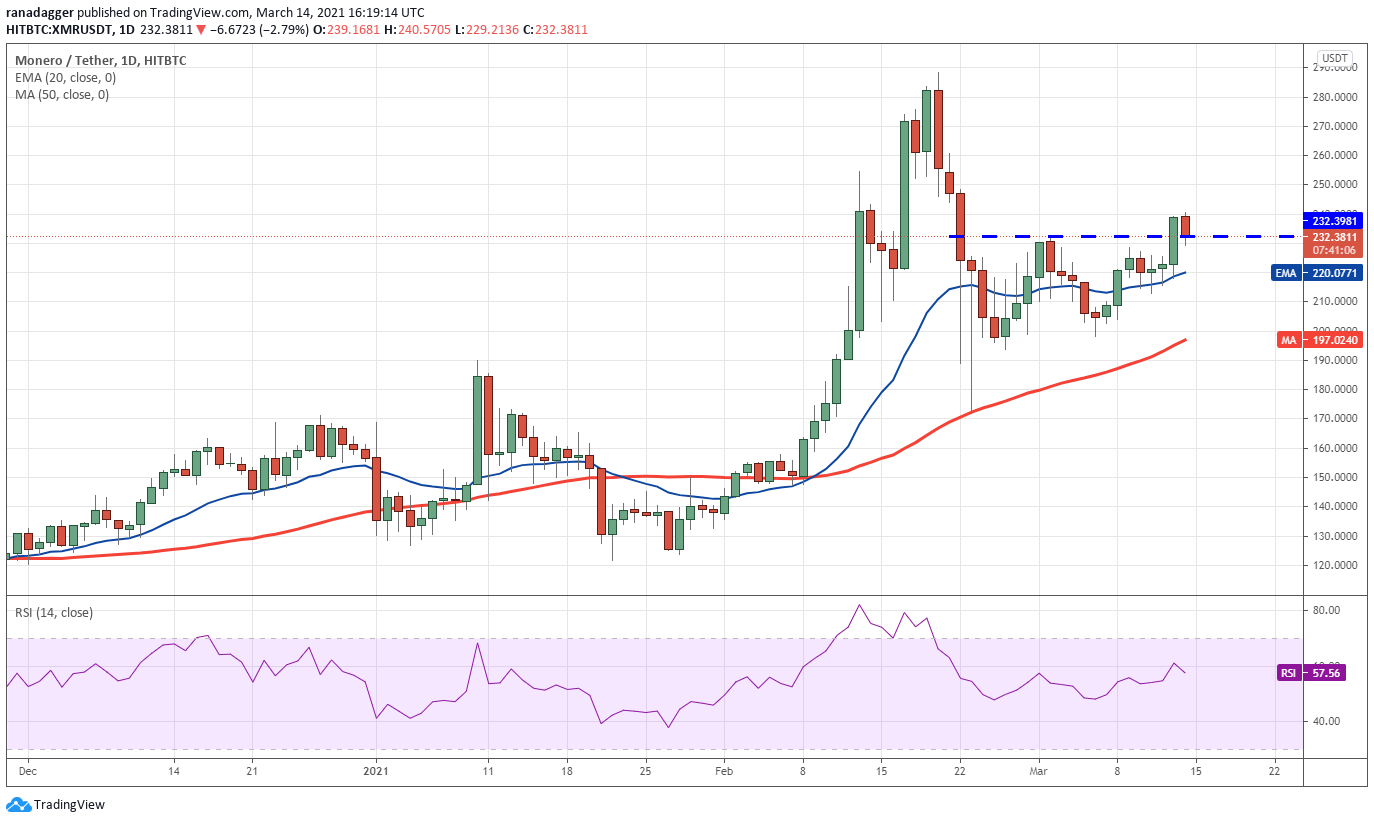 If they succeed, the XMR/USD pair may again drop to the 20-day EMA ($220). This is an important support to keep an eye on because a strong bounce off it will suggest the bulls continue to buy at lower levels.

The gradually rising 20-day EMA and the RSI above 57 suggest a minor advantage to the bulls. This positive view will invalidate if the bears sink the pair below the 20-day EMA. Such a move could pull the price down to the 50-day SMA ($197). 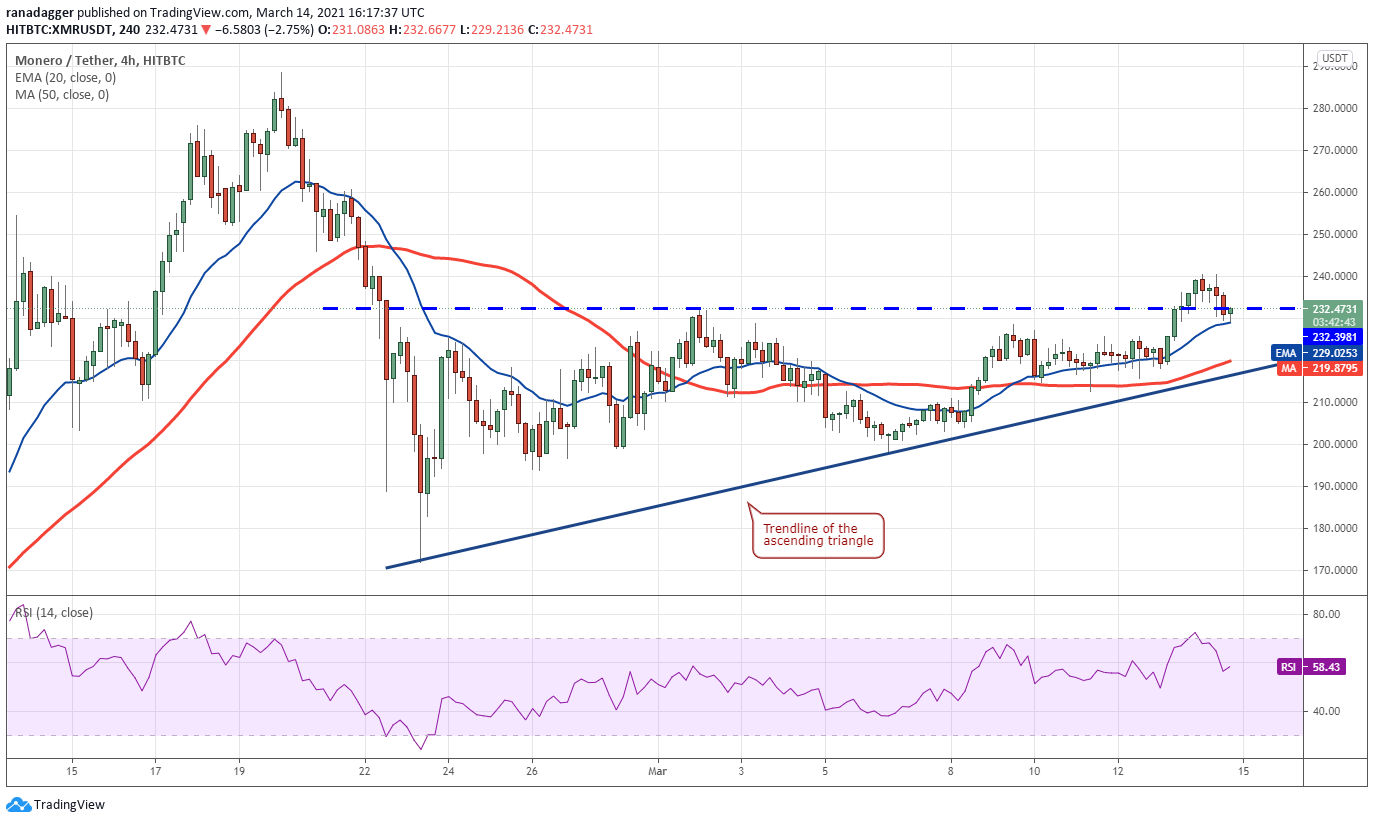 The 4-hour chart shows the formation of an ascending triangle pattern. The price is currently retesting the breakout level from the triangle at $232.39. A bounce off of this support could resume the uptrend to the pattern target at $292.89.

Contrary to this assumption, if the bears sink the price below the trendline of the triangle, it will invalidate the bullish setup. That could pull the price down to $200 and then to $171.90.

FTX Token (FTT) broke out of the $35 overhead resistance on March 9 and resumed its uptrend. The first stop could be $45 and if that level is ascended, the up-move may reach the psychological level at $50. 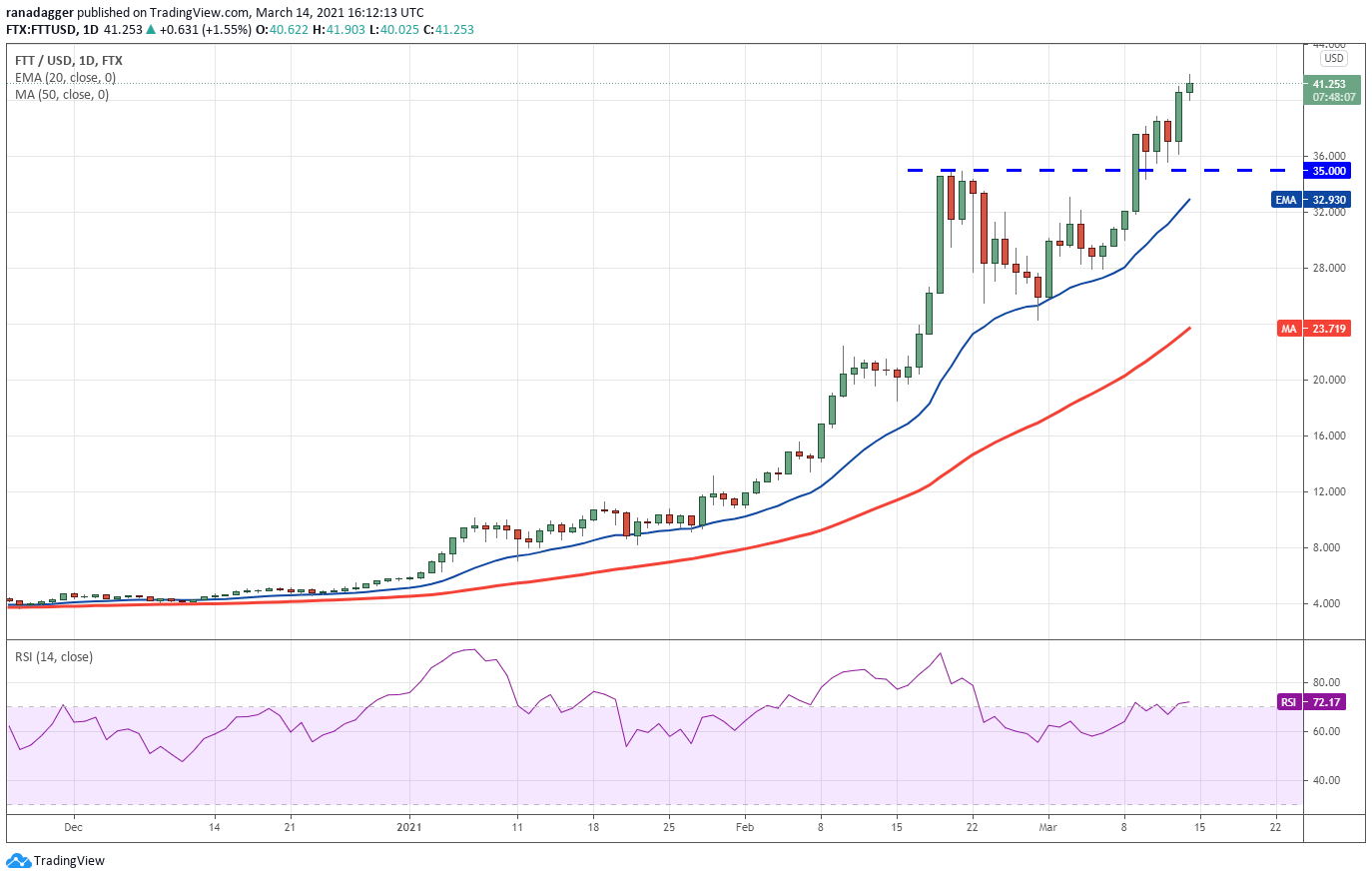 The rising moving averages and the RSI in the overbought territory suggest the bulls are in control. Any profit-booking at the current level could pull the price down to the breakout level at $35.

If the bulls can flip this level to support, it will suggest strong demand on dips. The $35 level could then act as a floor on any declines.

Conversely, a break below the 20-day EMA ($32.93) will suggest profit-booking at higher levels. The FTT/USD pair could then drop to $25. 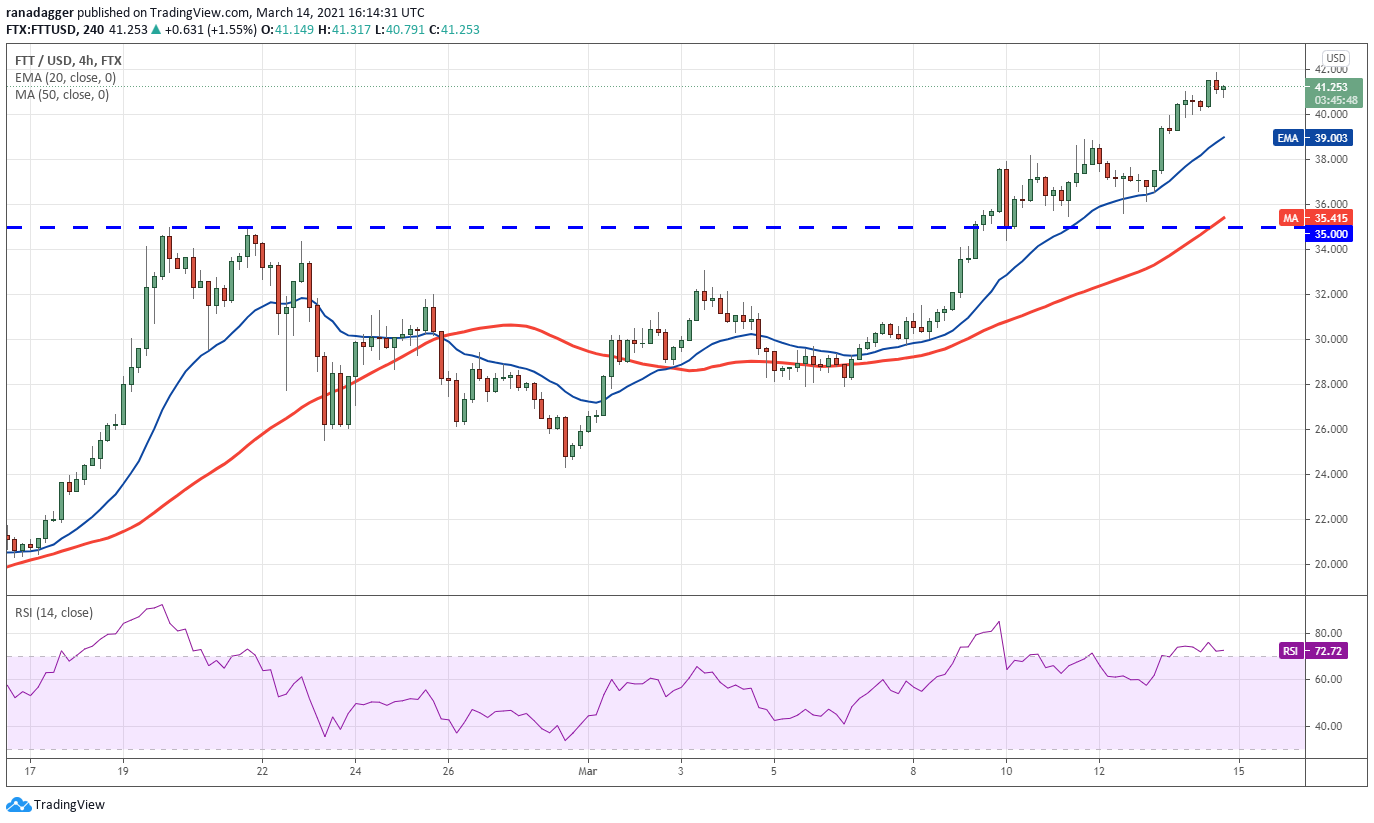 Both moving averages on the 4-hour chart are sloping up and the RSI is in the overbought territory, which suggests the bulls are in command.

The pair has continued its upward march without breaking the 20-EMA support, indicating the bulls are not booking profits in a hurry as they expect higher levels in the future.