Touch of gray: The Air Force can’t retire the Boeing 707 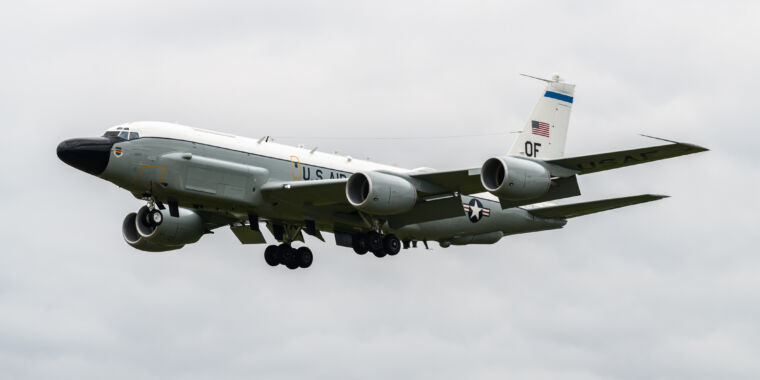 99 with 45 posters participating, including story author

The Boeing B-52 Stratofortress may have a lock on the title for oldest active-duty US military aircraft. But it only has two years on the Air Force’s other senior citizen, an aircraft that will likely keep flying for as long as the B-52: the venerable Boeing 707.

While the Air Force is working on phasing out the KC-135 refueling plane (which was developed alongside the 707 by Boeing in 1956), the 707 lives on in many other guises. There’s the Air Force’s E-3 AWACS and E-8 JSTARS command and control aircraft, as well as the US Navy’s E-6B Mercury strategic command and control aircraft (also known as the “doomsday plane”), all based on the 707 airframe. And as much as the Air Force might want to send its 707-based aircraft off to the boneyard—the majority of those aircraft were delivered before most active service members were even born—the US Congress recently made that goal more difficult to achieve.

The E-8 JSTARS and its associated ground stations have been at the center of the Army and Air Force’s joint surveillance, command, and control capabilities since the mid-1990s, after seeing early action during the 1991 Gulf War. Originally intended to serve as a flying command post with ground radar for tracking enemy armor, JSTARS added more sensors and capabilities over the past two decades as it evolved into an airborne reconnaissance, intelligence, and communications hub for joint operations, as well as linking troops on the ground with commanders and working with drones and other aircraft to find and fight insurgents.

awarded a $9 million modification of the ABMS contract held by Folsom, California-based Valley Systems to do all the integration work to turn sensors into nodes on the proposed ABMS IoT. But that work isn’t anticipated to be done until 2022, and there are still bigger issues to resolve with the overall network. So ABMS is still years away from being fully operational.

And that’s why the 707 still has miles to fly before it sleeps. In the 2021 Defense authorization bill passed earlier this year, Congress dictated that the Air Force cannot retire JSTARS aircraft until ABMS can replicate the level of capability and coverage provided by all 16 current aircraft. So these upgraded passenger jets, the same type that heralded the start of the Jet Age in the 1950s, are likely to fly for at least another decade.