This week CNBC reported that Morgan Stanley will give its millionaire clients access to Bitcoin (BTC) starting in April and this shows that traditional financial powerhouses are under pressure from their clients who are demanding exposure to cryptocurrencies. This suggests that the rate of institutional adoption may still be at a nascent stage. 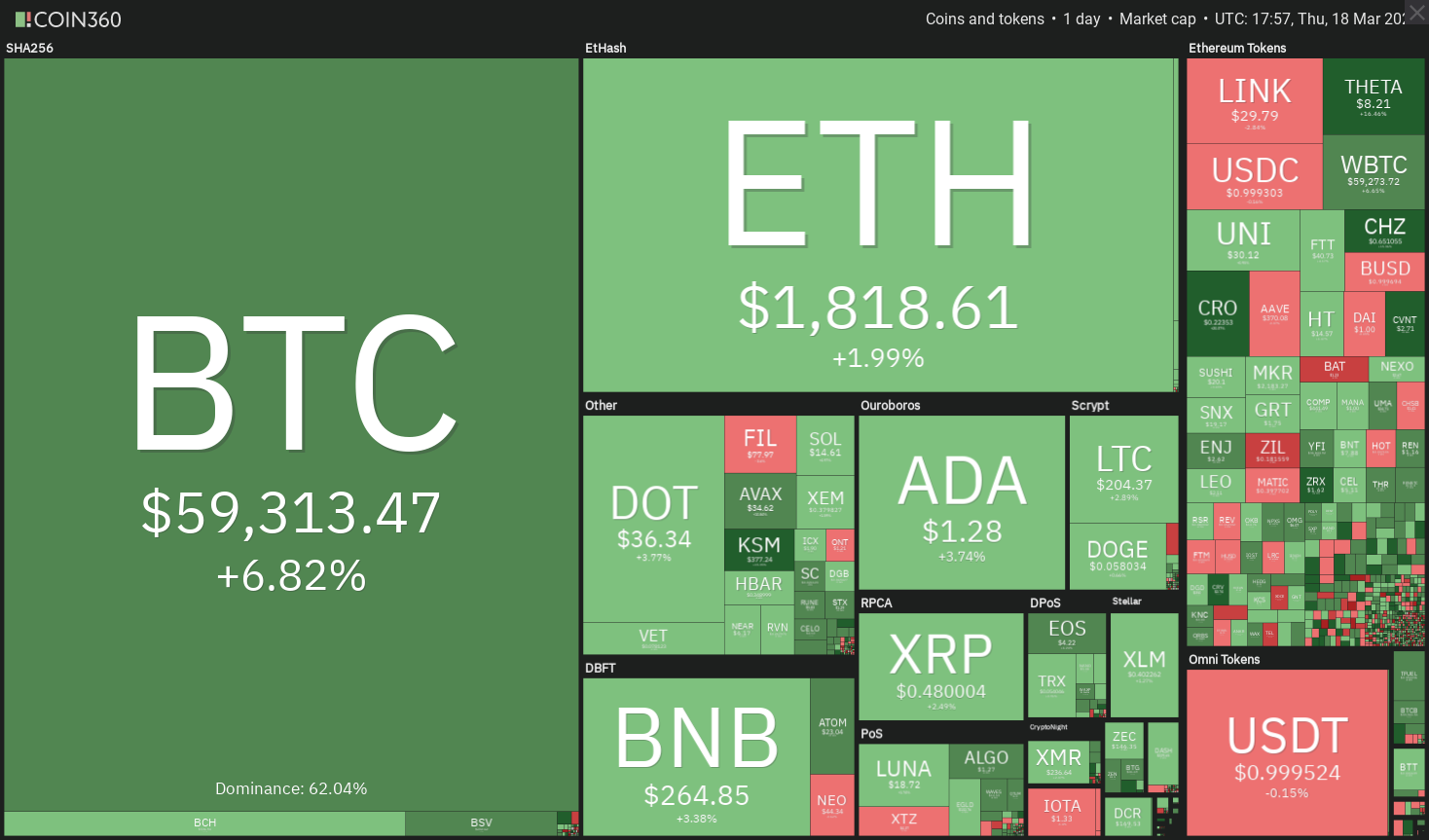 Chinese tech company Meitu also announced a new purchase of $21.6 million worth of Bitcoin and $28.4 million worth of Ether (ETH) on March 17. The company said its board believes “cryptocurrencies have ample room for appreciation in value” because the blockchain industry is still in its early stages and can disrupt existing technology and financial sectors.

Other than the major cryptocurrencies, there are several lesser-known tokens that show potential. While many will fall to the wayside, some of these could become winners of tomorrow.

Let’s look at the fundamentals and technicals of three upcoming tokens.

Built on the Binance Smart Chain, Linear protocol is a cross-chain compatible decentralized synthetic asset protocol, claiming to offer traders faster transactions at much lesser fees than its competitors on the Ethereum network.

Due to its cross-chain compatible nature, users can access both the BSC and ETH decentralized finance ecosystems and Linear has also partnered with Moonbeam for future Polkadot integration.

On March 10, Linear launched synthetic versions of the Xangle Large Cap Index and the Xangle Blue Chip Index. During an AMA session, Linear CEO and co-founder Kevin Tai said the protocol plans to launch innovative products that are different than what is available with other synthetic asset protocols.

After the initial listing euphoria dies down, the user experience and the product line could decide the future course of the token.

LINA skyrocketed from an intraday low at $0.073 on March 9 to an intraday high at $0.348 today, a 376% rally within ten days. However, the long wick on today’s candlestick suggests traders aggressively booked profits at higher levels. 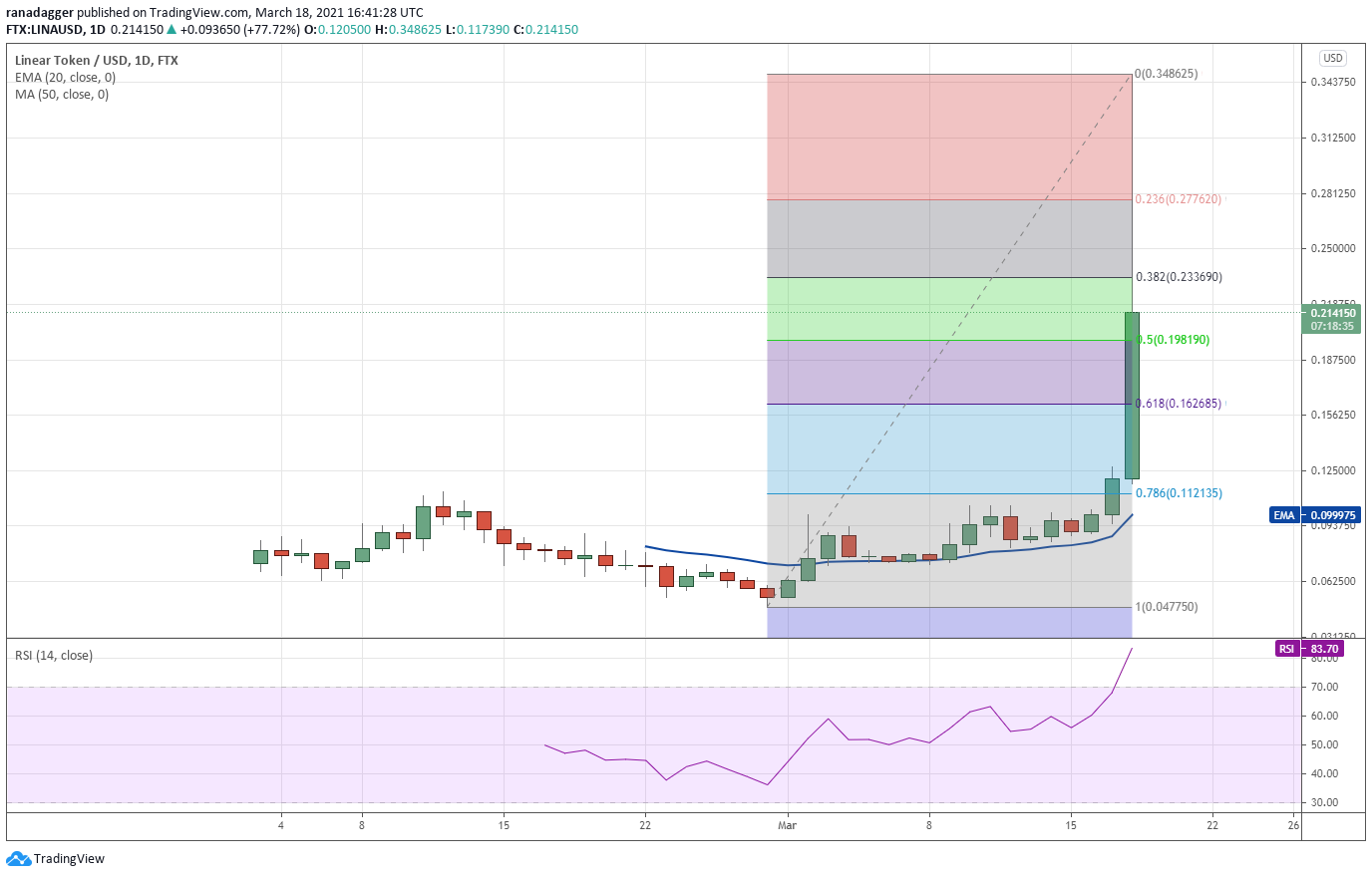 The LINA/USD pair is likely to find support near the 50% Fibonacci retracement level at $0.198. If that happens, the pair may digest the gains by trading in a range, before attempting to start the next trending move.

On the downside, a break below $0.198 could open the doors for a fall to the 61.8% Fibonacci retracement level at $0.162. Such a deep fall will suggest that traders have dumped their positions and that could delay the start of the next leg of the up-move.

Basic Attention Token (BAT) was featured on Cointelegraph on March 4 when its price was at $0.675. Since then, the token jumped to $1.369 on March 17. That’s a 102% rally within a fortnight. This shows that traders should nurture and hold on to the tokens that have strong fundamentals backing them.

Gaining support from the right investors can many times make a lot of difference to a project. Therefore, when Grayscale CEO Michael Sonnenshein announced on March 17 that BAT was one of the five tokens added to the Grayscale lineup, it was bound to stir interest among the community. This increases the possibility of greater institutional interest in the token.

In addition to this, Japan’s bitbank exchange announced it will add support to BAT from March 17. This step increases the reach and demand for BAT among crypto-savvy Japanese investors.

Fresh investors enter a project only if they see a possibility of further earnings. The Brave transparency page recently showed that about 100 active advertisement campaigns from the U.S. were running on the Brave browser.

A whitepaper “Engaging with Ad Choosers,” by Dentsu international and Brave shows that ads on the Brave browser outperform the traditional digital campaigns on key branding metrics. As the number of users increase, advertisers are bound to take note.

With Google embroiled in a lawsuit for collecting data even in Incognito mode, users interested in protecting their privacy could look for alternatives and that may lead them to Brave browser.

BAT has been in a strong uptrend for the past few weeks. Both moving averages are sloping up and the relative strength index (RSI) is in the overbought territory, which suggests the bulls are in control. 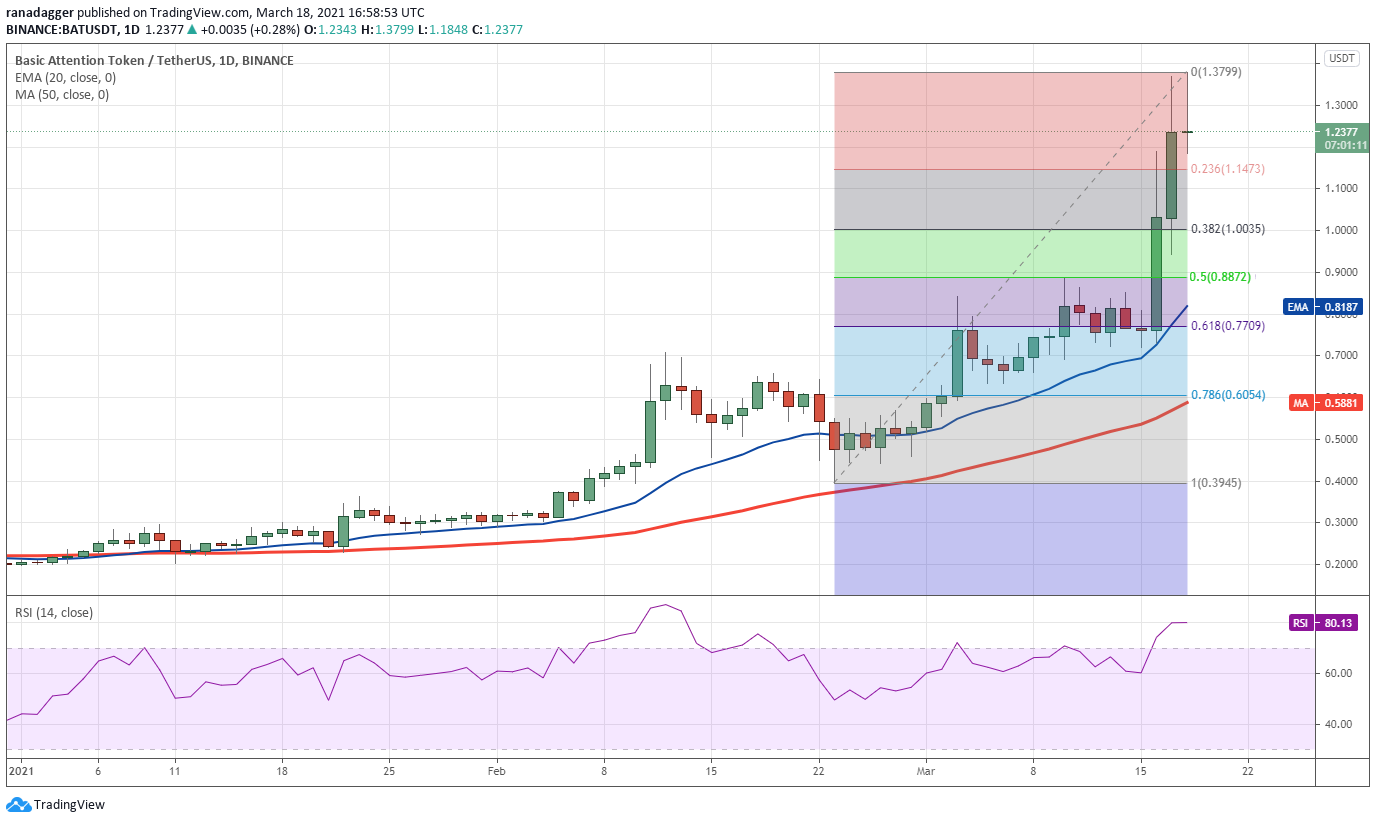 The token picked up momentum on March 16 when it rose above the overhead resistance at $0.89. However, the long wick on the March 17 candlestick and the Doji candlestick pattern today suggest the bulls may be tiring out.

The first support on the downside is the 38.2% Fibonacci retracement level at $1. This is also a psychologically critical support. If the price rebounds off this level, the bulls will attempt to resume the uptrend. A break above $1.38 could clear the path for a rally to $2.

Siacoin (SC) was showcased on Cointelegraph on Feb. 4 when SC was trading at $0.0085. The token continued its bullish trend after that and has hit $0.022 today, a 158% rally in about a month and a half. Let’s update its fundamentals and technicals to help traders make informed decisions.

Skynet Labs and Streambed entered into a partnership on Feb. 11 with an aim to give the control of the content back to the creators. The content uploaded through Streambed will be stored on a decentralized platform Skynet built on top of Sia. This ensures that the content cannot be de-platformed and hacked as it is stored world over secured by the blockchain.

Additionally, what generated greater interest and speculation was that Sia tweeted on March 15 about TikTok creators and their earnings and then teased to watch out for big announcements this week. While rumors tend to boost prices, traders should be careful because if the announcement is not up to the mark, speculators may dump their holdings.

SC is in a strong uptrend as it continues to march higher without showing any signs of exhaustion. This suggests strong demand at every higher level. However, the rally of the past few days has pushed the RSI above 82, indicating the token is overbought in the short term. 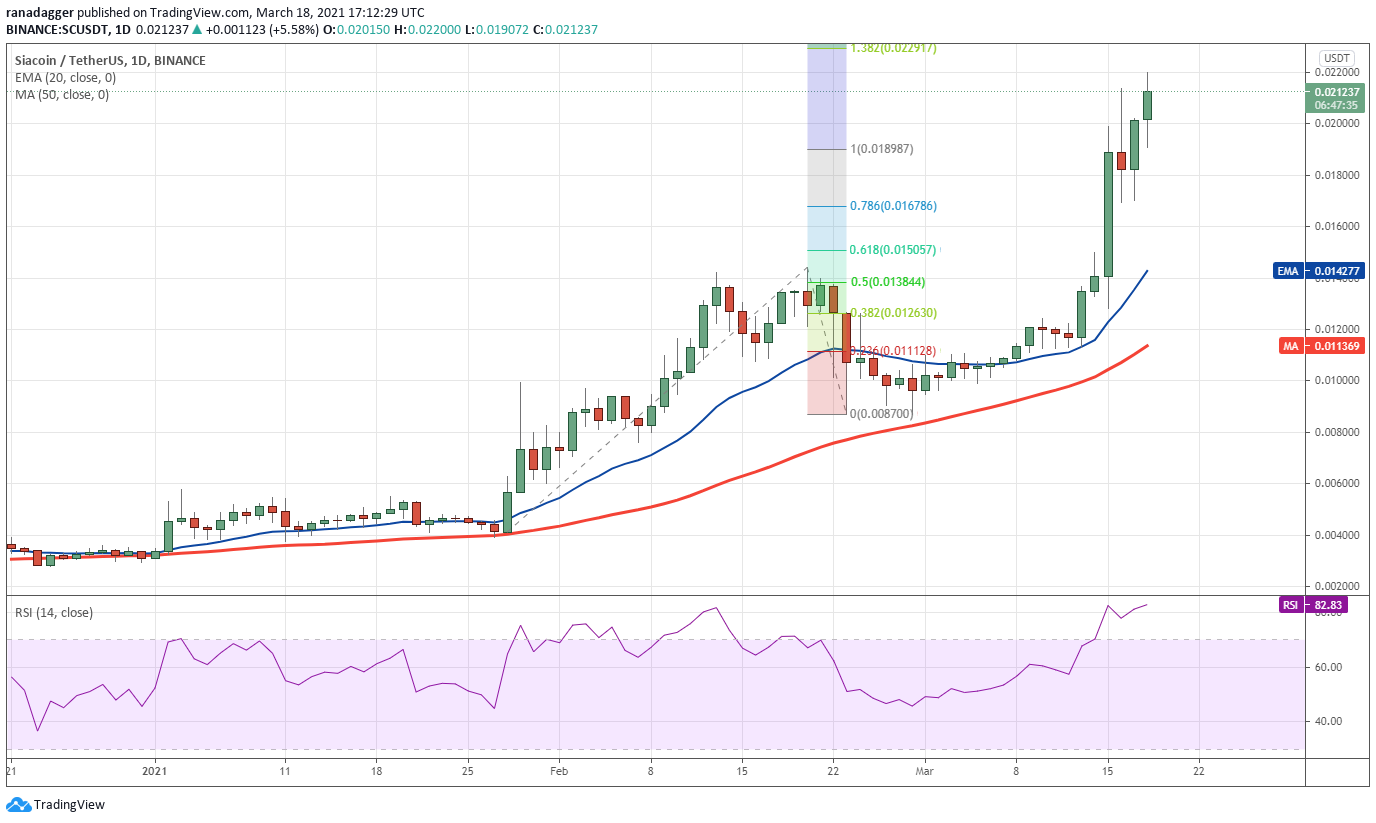 However, during strong uptrends, the crypto markets sometimes remain overbought for an extended duration. Hence, this should not be the sole reason for taking any action.

If the price turns down from the overhead resistance, it is likely to enter a period of minor correction or consolidation. A shallow pullback will suggest that traders are not closing their positions in a hurry, which could keep the gates open for a further rally.

Alternatively, a deeper correction will suggest that traders are dumping their positions in a hurry. If that happens, the pair could enter a consolidation, delaying the start of the next trending move.